Warhammer Third Edition: 10 Things I Love About You! 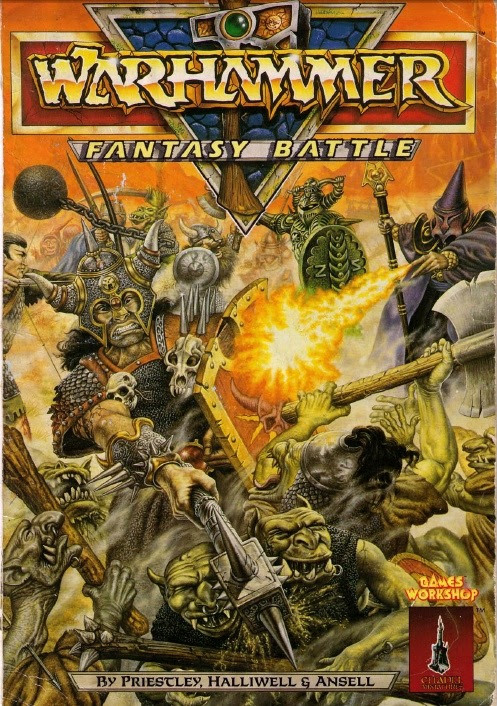 I have recently been on holiday. Not far, just down to Kent for a few days at a Haven Holiday Camp, so that my very pregnant wife and young son could have a bit of a break. We were really lucky with the weather; warm sunny days, mornings spent swimming, nice food and afternoons where the wife and son slept contentedly for a couple of hours.

During this rare 'freetime', I endeavoured to re-read the Third Edition Rulebook cover to cover. I say re-read, but I am not entirely sure if I have ever actually 'read' it before. Sure, I've flicked through (I've spent 20+ years doing that) and made reference to different rule sections but I cannot actually recall reading the whole book through, cover to cover.

Well, I have just finished it!

Upon completion, I began to ponder on what makes this particular edition so popular. It cannot just be the musing of a few nostalgic old leadheads. A glance at eBay tells a different story. You'd have trouble shifting a copy of 4th, 5th, 6th, 7th or even 8th (recently I've seen the deluxe, limited edition of 8th not selling for £30) but 3rd? Just look at eBay and you'll see what I mean.

That, I think, is an answer best left to the individual. We all appreciate different things about 3rd edition because we are different people. What does surprise me, however, is that there are some gamers who were not even born when the edition was published picking up a copy of the ruleset and having a go.

Strangely, Rick Priestley, one of the authors behind Warhammer, has gone on the record to say (and I paraphrase) that its the edition remembered most fondly but, in his view anyway, the least playable. I can see his point, it can certainly be an unwieldy beast if you are not prepared to do some homework, but that is due to the nature of the beast; having been written alongside a RPG during an age in gaming dominated by RPGs.

So, to me anyway, Warhammer 3rd is more of a RPG Wargame than a straight out the box battle you can be playing in under twenty minutes.

So what are the 10 Things That I Love About Warhammer Third Edition? I listed them below and made an effort to explain my choices. The sections are in no particular order, so don't feel one entry has any preference over any other

10: The Cover
It feel that its fair to say that the cover of Third is the best cover Warhammer has ever had. John Sibbick's work still packs a punch today. The orange, misty battlefield full of strange, mutated creatures fighting amongst themselves. The enigmatic central barbarian (who I have always assumed to be Sigmar) splitting skulls as warriors fight around him. In the distance, obscured by the smoke of battle lurk other, unseen things, hinting at the horror rooted deep inside the Warhammer World. Evocative indeed!

9: Internal Art
Some bloggers have condemned the art in Warhammer Third as being a lazy exploitation of GWs art assets at the time of publication. I disagree with this. Afterall, what is the purpose of GW's art but to illustrate what the Warhammer World looks like. Compare the art with what we have today, eh? Full colour oil paintings, many of which look like the work of old masters, that have a depth and imagination that is sorely lacking from the samey output from the company today. John Blanche's work from the 80s is exceptional in its execution and a real source of inspiration to this day. Then there's the detailed work of Ackland, or the busy linework of Nicolson, or Stephen Tappin... the list goes on and on. The art makes the book a joy to flick through really and everytime you look, you notice something different.

8: Freehacks and Routing
I love the freehack. The fact that you get two when a unit routs can be very destructive. I case you are not aware of what the freehack is, its a rule that sets to represent the carnage inflicted when a unit runs away. These are essentially automatic hits, though you still roll for damage and saving throw. On a good day, these can wreak ruin upon the enemy but also gives a unit more of the chance to rally and reform. I've had a unit routed across the battlefield, seen a number of them fall to freehacks, for the unit to rally, reform and do the same to the enemy!

This was one element of Third I really missed in later editions. I recall playing 5th Edition with my stepbrother soon after its release. I had a unit of Bretonnian Knights and he had a unit of skink archers. For whatever reason, my knights fled and the skinks chased them down a destroyed the whole unit!! WTF!! We just stood there amazed! Like that would happen, eh?

7:  Magic
The magic system is totally zany in Third but was designed to be used with the aid of a GM. Some of the spells are absolutely terrifying (Vortex of Chaos, anyone?) but the majority of them are available to all magic users. To me, its the illusions that are so fantastic. Field a unit, march them as normal seeing your opponent react to them. Then, as they charge into close combat you flip over your piece of paper and... it was all an illusion! I also love the rules for magic rings and scrolls. You can kit up your wizards with all kinds of magical mayhem and even supply a spell or two to regular characters.

6: Character Creation
I love the rules about character creation, both for fighters and wizards. This was on of the elements I really enjoyed when re-reading the rules again. This section, though small, really got my creative juices flowing as I set about creating Level 5s, Level 10s, Level 15s and Level 20s. There is such an emphasis on characters being a integral part of the narrative in Third rather than simply just two armies slugging it away via list.

5: Rules for Different Weapons
My regular opponent in all things Third Edition, Dan, loves this section. Full rules from everything for Aquebuses to Morning Stars, and these weapons, they can be given to just about any character or unit within reason. Orcs with blunderbuses? Why not! Pygmies with Double Handed Weapons? Yes Sir! Just about any crazy combination you can dream of! Love this alot!

4: Encumbrance
Equipment, especially armour, weighs you down in Warhammer Third and affects your movement characteristic. This adds a tactical edge that I really appreciate, particularly in Realm of Chaos games where you field mixed units of troops. These rules add to the 'grown' up feel of the ruleset and we stick to them like glue. Its amusing when playing a campaign to end up with a character who cannot actually move due to limb loss and heavy armour!

If you have played Third then you'll know what I mean by the wheel, wedge or single file manoeuvres. The elaborate movement of units really makes this version of the game what it is. That, coupled with the Reserves phase, makes movement an interesting part of the game.

2: The Bestiary
Pretty much every monster in the game is listed, described with full rules and presented with a points value. So it is possible to play the game WITHOUT having to buy any more books. Sure, Warhammer Armies is useful for the lists but with a little effort, its possible to create a game using the rulebook alone. The descriptions are also rather readable and help give an impression of what the Warhammer World is like. There are also rules for werewolves.

1: Believability
For this section I am going to quote directly from the rulebook.

"Games are always more satisfying when set firmly within the context of a credible society, especially when that society is situated within a carefully detailed world, complete with its own history, geography and political intrigues."

Its a shame that GW forgot about this one, isn't it?

Well there is my list. Have you got anything else to add about Third Edition?