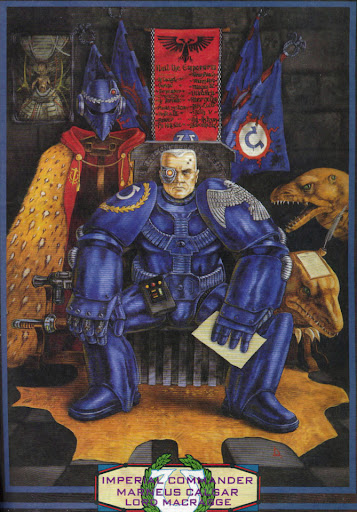 As I mentioned recently, I have caved in to the pressure and started collecting Rogue Trader miniatures. My interest was rekindled as I was researching for some of my more recent posts through my extensive White Dwarf archive (its much better owning the magazines themselves rather than the pdfs, and I really do recommend collecting the issues 90-153 if your interested in the period) and after a few whimsical purchases at Salute's bring and buy and, of course, eBay.

I don't own much at the moment but that will undoubtably change in the future. I have enough to get started. I doubt that I will focus entirely on Rogue Trader itself; so that means exploring the 'spin offs' of Adeptus Mechanicus and Space Marine but those explorations are a long, long way into the future.

As a retro site, I intend to stick to the original zany approach to the game before things got way to 'GrimDark' for my taste. One of the things that attracted me back to the game where all the amusing jokes and puns that litter the background. I hope to explore these in more detail in time of course.

Recently, I have spent a great deal of time writing articles for this blog and I must say that I have really enjoyed it. As some of you may be aware, my second child will be born soon and I fear I may have to 'do a Gaj' and cut down on the time I devote to research, painting and blogging. This is a two edge blade though, as though I doubt I'll have time to post each day I'll certainly be able to get a bit more painting in while the wife feeds. Not that I've actually done much; the Wolf Riders still sit unfinished and I'm going to set myself a challenge- namely, get them finished soon! Hopefully, I won't become, as the title to this post suggests, a 'Rogue Father' and get endless earbashings from the wife with my 'little men hobby'!

Naturally, I am itching to get going with Rogue Trader. I played, and painted, a lot of 40k over the years, but with yet another edition of the game released (how many editions do we actually need?) and a wealth of official paint schemes, fluff and what not I found the game rather restrictive. I'd much rather paint and game in a crazy, colourful universe a la 1987 than 2012. Thus, I'm going to paint up a metal space marine and an ork. No chapters, no clans, just my imagination and, hope a wondrous sense of creative freedom (with a retro slant admittedly).

Enough of the waffle, here's the link to my new blog if you're interested in coming along on the journey, or even contributing to it if you are a Rogue Trader fan and have photos, memories or comments to make about the game or era; my blogger email being orlyggjafnakol@hotmail.com.