So we return to the Walls of Contagion, the second battle report I have written up on my blog, hopefully in the future and can organise games more regularly as there are many troop types, additional rules and whatnot that I would like to try out.

That is the beauty of third edition- there is just so,so much to try out.

After a slurp of juice and a quick chat about the miniatures, we returned to the game. It was Dan's turn and he moved his chaos hound, Mange, around the outside of the barrack house in position to charge my troops in the rear. During the combat phase, low dice rolls marred the destruction but Ironcron, in a moment of supremacy, defeated the minotaur and sent his body crashing down into the bloodstained grass. This was a disaster for me, for Dan's champion now had free rein to cross the hedge and attack my forces in the side or rear. I tried to respond in kind, but neither my beastmen nor thugs could inflict anything other than a wound or two (beastmen have two wounds each in third, which makes them quite tough in combat). 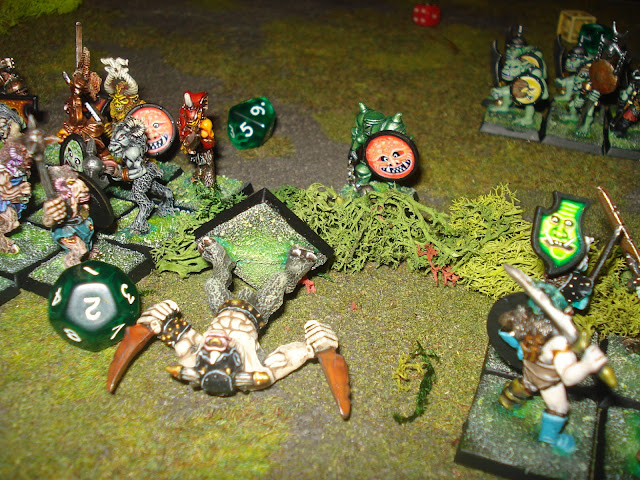 To rub salt into the wound, Dan charged his orcs back into my weakened Thug unit before crossing Ironcron into my territory. The fighting was brutal and I managed to hold his greenskins back for a turn but I was extremely concerned that this was the beginning of the end of the game, with my troops about to be slaughtered and routed. 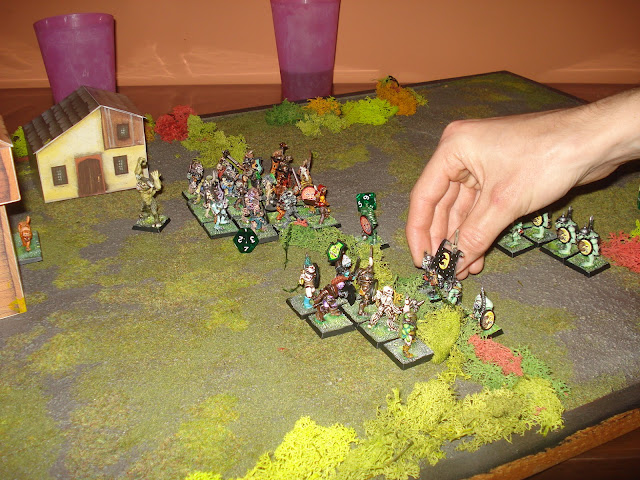 Here Dan gleefully repositions his orc regiment as it collides with my thugs. Note the girly pink cup, that's Dan's drink. Don't worry though, true to all Khornate followers it contains the fresh blood of virgins- that's all Dan drinks these days... 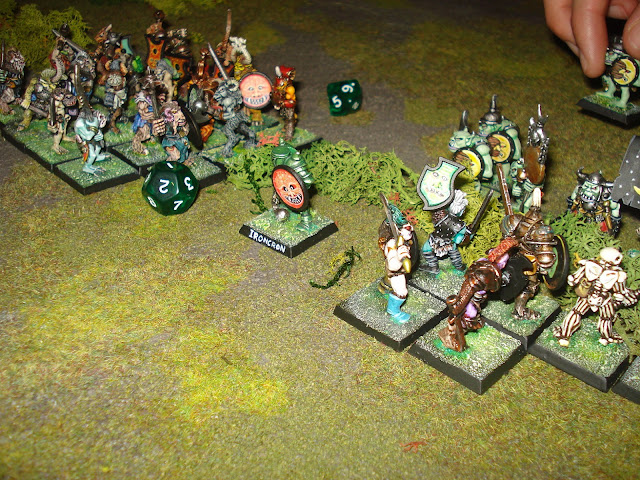 Here Ironcron crosses the boundary of the hedgeline, stepping over the body of the toppled minotaur. Things were certainly dangerous for me at this point as I had no idea which of the two units Dan intended to attack! 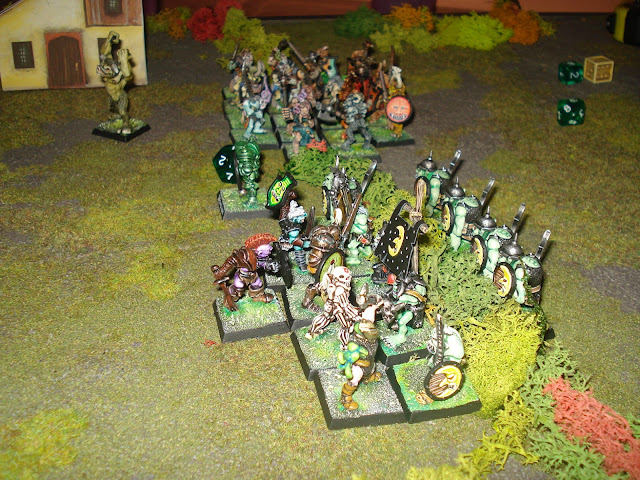 The subsequent combat phase saw my beastmen once again hold their ground but things were not so successful on the right flank. Defeating my thugs in combat (after felling another model), the unit was pushed back which allowed the orc regiment to cross the hedgeline for the first time. Things were certainly critical, with three units now secure inside my territory. Desperate not to appal his foul master, the Nurgle Champion fought on with renewed vigour but couldn't wound or kill a single orc, on the other hand, the orcs started singing that classic war ballad 'We woz o'nee followin' orderz', certain that victory (and piles of rather sticky, stained loot) would shortly be theirs. 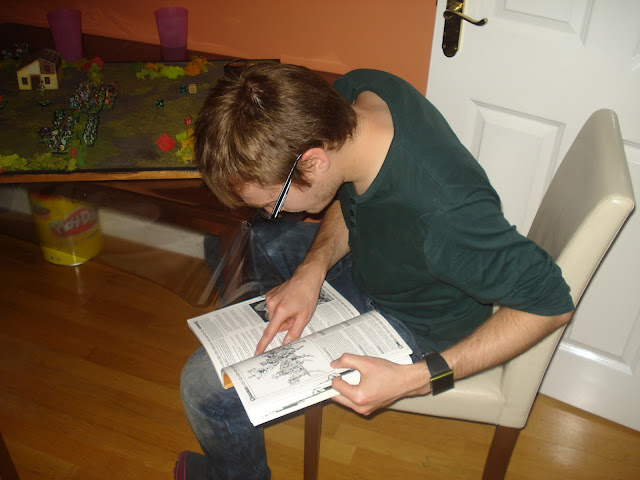 Sated on blood, Dan takes time out to consult the mighty tome that is the third edition Warhammer rule book. Looks like the psychology section to me! 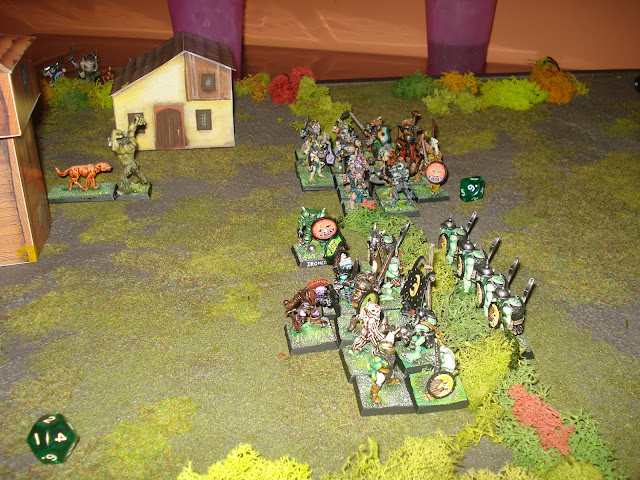 With my movement turn I opted to charge Mange with my remaining minotaur, stopping the orange, snapping canine in its blood stained tracks. Ironcron stood impassively for a moment, his goresoaken  morningstar limp at his feet, before deciding to engage the thug regiment. Dan thought it seemly that a champion of Khorne would seek to cut his way through to a rival's minion and engage them in single combat. 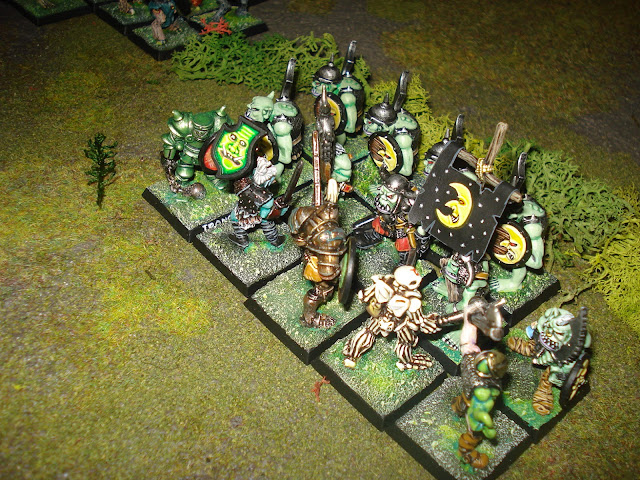 Thankfully, we forgot the panic rules connected to side charges and so my thugs had no concerns about remaining where they were. A deep melee soon developed between the orcs, humans and chaos champions. 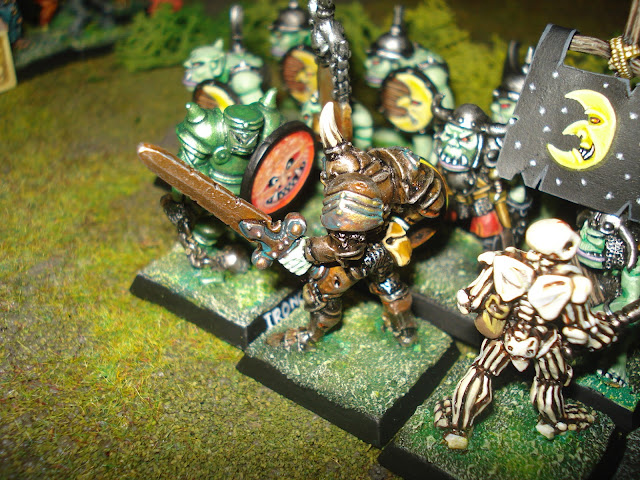 Finally, the two champions met face to face over the torn corpses of the followers of Nurgle. Initially, I held the upper hand, wounding Ironcron, but the dark lord of poor dice rolls was soon once more at my back, influencing my wrist into rolling ones. Gradually, the Khornate Champion grasped the upper hand and beat my champion down into the bloodsoaked mud. 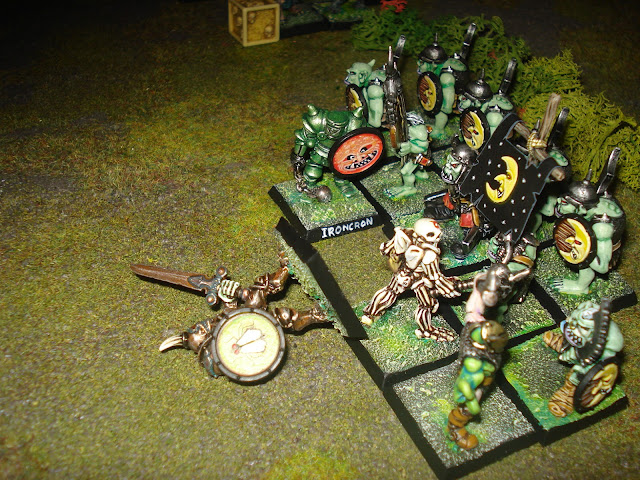 With an almighty strike, Ironcron slew my Nurgle Champion and cast his body to the ground. Stepping forwards over the rusted armour and writhing maggots, Ironcron called loudly to his patron and offered up a prayer of blood, a sermon of violence and a psalm of death. Morningstar whirling over his head, he charged into the remaining thugs, terrifying them and scattering them to the four winds...