Thrud the Barbarian; the first of the White Dwarf comic characters. Popular ever since his first appearance and still going strong. You can order issues direct from Critchlow's website.

Today I wish to discuss the comic strips that used to appear in White Dwarf. They were wonderfully subversive and amusing yet I have very little memory of them from the 80s. Perhaps that is because my first 'proper issue' was WD108 and the magazine had turned into a rules/new miniatures/citadel news beast by them. I do recall the second of the comic characters, Gobbledigook though, and remember being rather puzzled by what, if anything, was actually going on in the strips.

Gobbledigook was created by GW artist BiL Sedgwick. I'm not sure what he is supposed to be. A snotling presumably.

So let us go on a little journey through the realms of comic art. I know, I know... It doesn't actually have much to do with 3rd Edition Warhammer but its zany, non-conformist attitude is well in line with the spirit of the age, don't you think?

Critchlow was 18 when he created the character of Thrud, inspired, partly, by Robert E Howard's Conan the Barbarian and Arnold 'I'll Be Back's' Schwarzenegger's interpretation of the loin clothed hero. He was studying at Art College and saw an advert in WD for a cartoonist; he sent in an example of his work and was hired. Between issue 45 and 105, Thrud's antics amused readers of the magazine and won 'most popular feature' three times with GW releasing a 'Graffik Novel' in '87. Later on in the run, Thrud would regularly cross genres to become involved in different GW related settings; from Dark Future, to Warhammer and Rogue Trader among others. Eventually, Critchlow and GW parted company and he moved on to work for 2000AD. 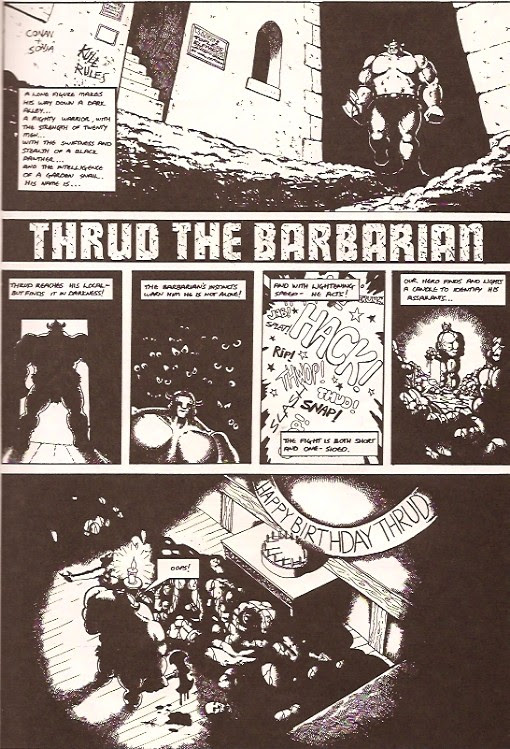 Here Thrud ruins his own birthday party in humorous fashion- well he does have a pin head you know (possible chaos mutation?)

Carl Critchlow often appeared as a character in the stories. This strip seems to allude to Chainsaw Warrior; another 80s GW game.

By the mid 80s GW had published a very popular Judge Dredd roleplaying game, as well as a line of miniatures. Here, good old Thrud becomes involved in Mega City One.

Whether he was a snotling or a goblin, Gobbledigook frequently got himself in trouble, and like Thrud, explored elements of the Warhammer (and related GW games) mythos in amusing and unexpected ways. Like all good comic characters, he had a side-kick; a small, spider like creature called Niblitz.

Here he causes havoc amongst the across the full range of games; Warhammer, Bloodbowl and Dark Future all in a single strip!

Not quite sure what is going on here. I think that may be the point.

This one is making fun of the new 'Troll' games released in the late 80s.

Here Gobbledigook ends up coming a cropper after messing with some hobgoblins. Nasty!

A finally, the little goblin/snotling visits the GW design studio. Miniatures were (and still are) produced to celebrate our hero. Thrud even appeared in one of the battle scenes in the 3rd Edition rulebook. You can still buy Thrud miniatures from Heresy apparently, though I haven't checked that they are still available. Anyone know? Gobbledigook takes the centre stage here... What a lovely little model (and Niblitz too!) Better get trawling eBay to see if I can find him...

Well, I hoped you enjoyed this little trip into the past. I have posted some Rogue Trader related strips on my new Rogue Trader blog if your interested in checking them out.