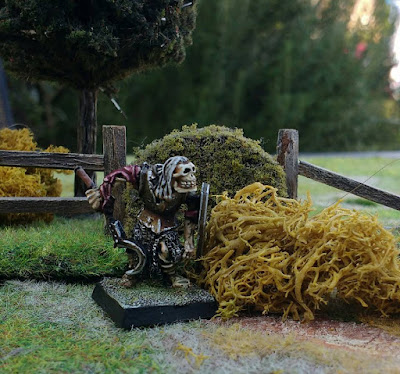 Work on my second zombie by Kevin Adams is complete, and I even had a little attempt at a shield freehand design. As with the last miniature, this figure was released in June 1986 along with a large bunch of other rotters. He had a fairly long shelf life for a zombie, and was still available in the '90s as simply 'sickle'.

I used a similar colour scheme as before, with greater use of silver metallics to paint up his rusted armour. For this I based everything in Foundry's Chainmail A, washed the lot with layers of brown and black ink before highlighting up with the remaining shades in the triad. Obviously using the lightest tone to pick out a few details on the edges of the breastplate and raised areas of the tattered chainmail. 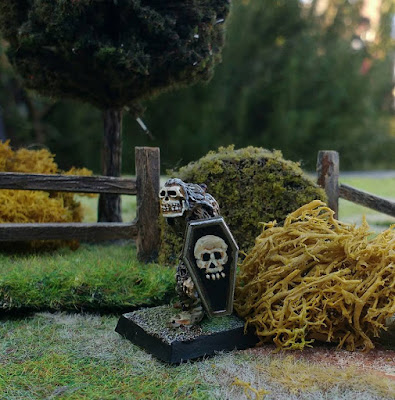 As you may be able to spot from this photograph, my eyes were really playing me up when I was trying to paint the teeth and this side of the model looks a bit gappy. But I am happy he is finished. Painting the shield design wasn't as hard as I was expecting. To be honest, I was a little worried about how things would turn out but if anything, I rushed through things as I enjoyed it so much. In hindsight, I should have waited for the layers of paint to dry thoroughly before moving on.

You live and learn, I guess.

I finished the shield up by carefully edging the rim with bright silver.

All in all, a nice little model, if a little rank and file in style. 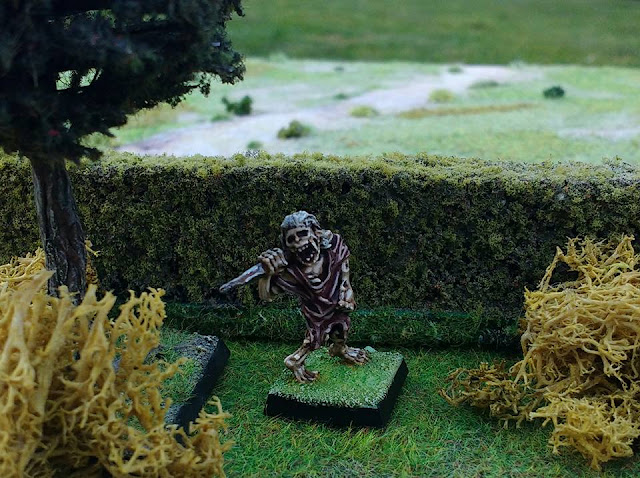 Sticking with the undead theme (they are fairly forgiving on slap-dash painting technique) I managed to paint up this model since my last post. He is Snagglespeen, from the 1986 zombie range, and was sculpted by Kevin Adams.

You can see him bottom left on this old flyer advertisment. 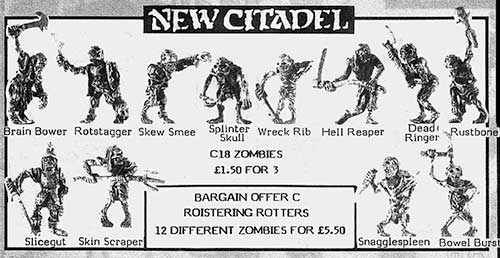 As before, I battled to keep my hand steady the whole time (as you can see from some of the edge highlights on the clothing) but I am pleased with the result. I have always felt the secret to a good painted figure is getting the colour scheme right, and using appropriate tones to shade up or down. As I was working on a proper rotter, I chose earthy, graveyard colours along with a dirty white for the hair.

All the colours you can see here are mixed from two or three commercial paints to create the base colour, then washed over with a variety of products (mostly the old GW washes) and then highlighted up with Foundry Boneyard B and C. I always add these in small increments to try and avoid bleaching out the colour too much, though on a long dead zombie such bleaching can be appropriate if handled properly. 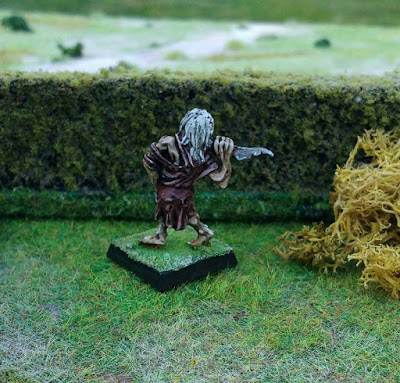 All in all, a great fun figure to paint up over a hour or two. I am sure that I Rotstagger and Skew Smee somewhere in the leadpile somewhere, so I may well add to this range in future. A second zombie, as of yet unidentified, was unearthed alongside this chap and he is also nearly finished. He requires a shield to be added on so I might have a crack a some simple freehand after all.

Orlygg Rises From The Grave... 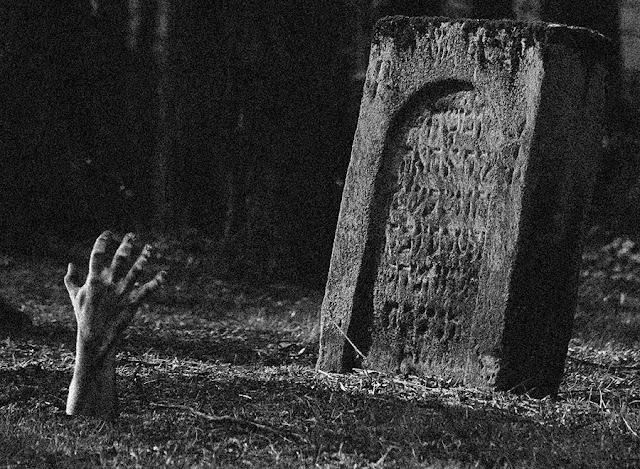 A cold, clammy hand emerged from the darkness with its fingers splayed outwards. The digits quivering with an ancient ague. Dirt encrusted the nails, the skin was sallow as if a stranger to the sun. The palm brushed against a rough surface and pushed weakly against it. Above, a bell tolled. Dusty, shuffling feet lurched forwards as the doors of the threshold were thrust open.

"Can I buy some superglue, please?"

This blog has been very inactive since summer 2018. Why, may you ask? Because its author too has been very inactive, extremely inactive to be precise. In fact, the only thing to have achieved anything on my modelling bureau since August last year is the superglue soldifying. Hence my trip out this afternoon to purchase some more. The reason? I was busy not dying.

Six months away is a long time in the world of blogging and I had a mass of spam to deal with. A strange mixture of Pakistani tourist advertisments, curious requests from African witchdoctors and Chinese offers to up my page views and supply me with a lifetimes supply of lead. Oddly, no Raybans were offered to me! 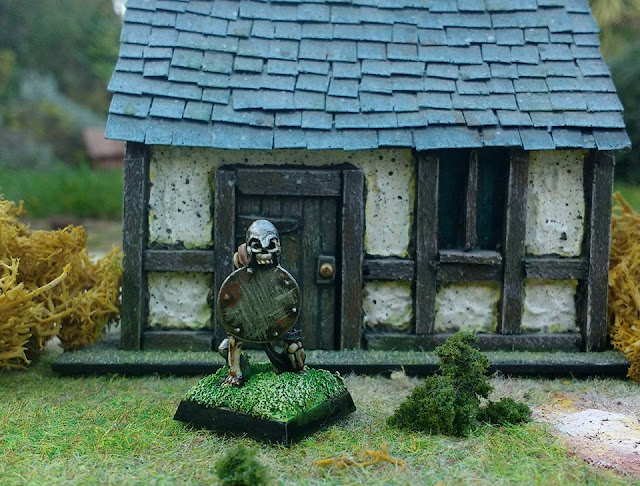 Without dribbling on about my medical woes too much, it seems my eyes can barely function and my fingers can only feebly fondle my paintbrushes. It was with some trepidation I set to work on a simple figure to assess the long term damage. I chose the classic skelly biting on his shield from the pre-slotta Citadel days. I have completely forgotten the range.

Black undercoat, with Foundry Boneyard triad to pick out the skull and limbs. Army Painter silver did for the helmet, shield and axeblade. Old school Bestial brown for the leather strap and haft. Once dry, I just washed the lot in a dribble of Devlan Mud - what a much lamented wash - and highlighted back out using the lightest Boneyard tone.

I have lost much of my skill with fine work though I was pleased with the scratches I could pull off on the flat shield surface. There was no way I was going to stuff up my hard work attempting any freehand. The base was the usual superglue+sand+Woodland Green, with yellow and again Boneyard drybrushed over the top. 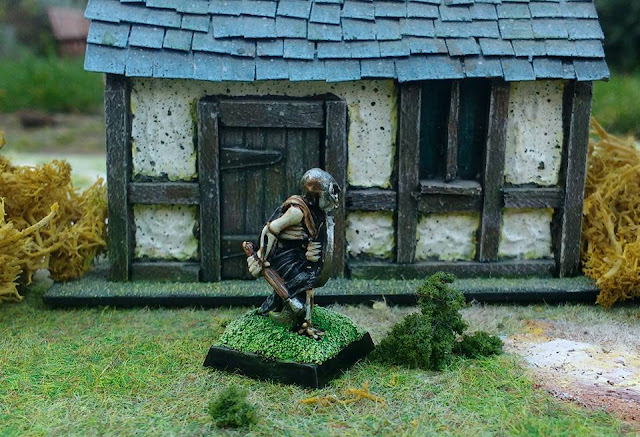 Here is a side view as most of the model is focused on the shield. I kept the rags black and drybrushed over the material with a little grey. A black wash brought the tones down enough to look passable. I struggled to highlight the strap over the shoulder as my eyes threatened to cross and my hand started wobbling like a Slanneshi accolyte's undergoing therapy, and those smeary lines are the best I could do. I am interested to see if my technique will improve before my next hospital appointment in March.

Long time readers may fall from their seats now... but I have been helping my nine year old son paint modern GW figures this afternoon. He as independently bought himself 'Storm Strike'- the AOS starter boxset and has begun work on the undead GlaivewraithsTM. Being the boneweary veteran of the miniature hobby I advised him to read the book first, to get some idea of what the game is all about. After about twenty minutes he brought the ghastly publication to me and stated 'this makes no sense!'

Foolishly, I thought he'd have a rule querry but no... He had noticed that the photographs of the miniatures being painted lack paint on the end of the brushes. God knows what he would have made of the whimsical nonsense of the WFB3 rulebook!

I am going to try something a little more adventurous than a skelly over the weekend. Wish me luck!