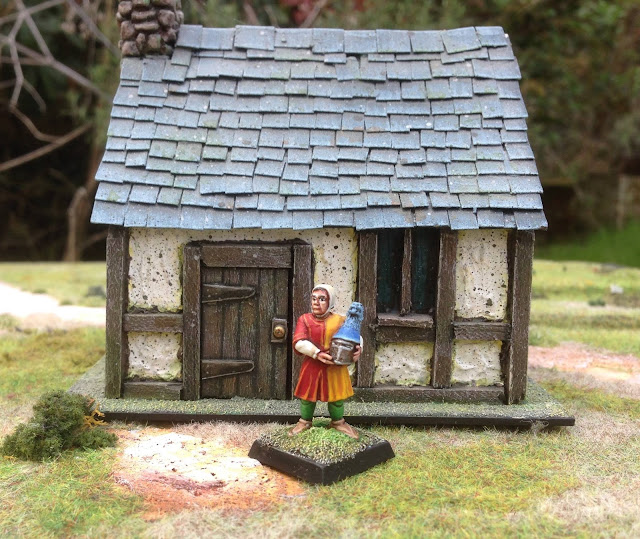 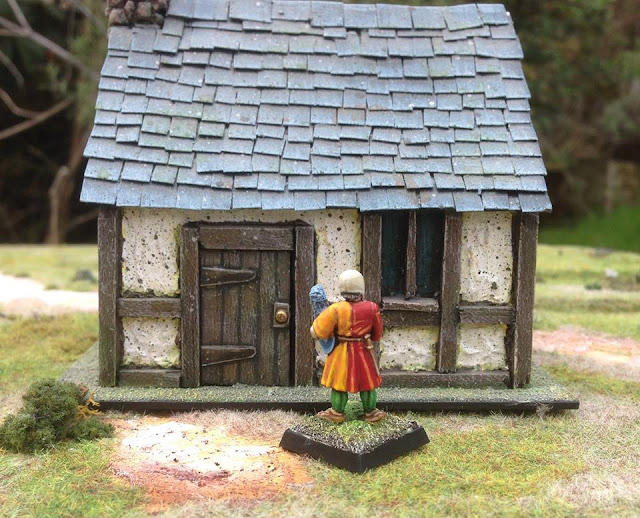 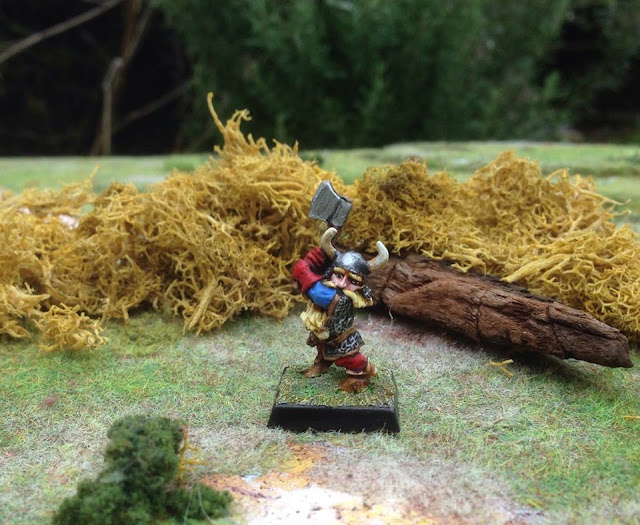 I haven't done any real painting for ages as I have grown so sick of the deathly dull light that abounds here in England. It has been the winter that hasn't known when to stop! My eyes just are not what they used to be sadly and working in anything but bright sunlight is proving to be a struggle. I know, I know that there are loads of lamps out there on the market that might be of use to me, but I have yet to find one as good as cheap old sunlight!

Despite this, I felt like having a good crack at a model today and what better a piece that the old Norse dwarf that had been sitting on my painting shelf for goodness knows how long! Obviously not wanting to spend too long working without glorious sunshine, I decided to challenge myself to the 'speed painting' rules I have discussed in the past.

One model in one hour. And you have already seen the results. I am fairly satisfied with the finish, though the brown on the belt and chainmail edges are screaming out for a further highlight. The metalwork also could have done with a little bit of cleaning up, especially between the helmet and the chainmail on the reverse shot below.

But I ran out of time. 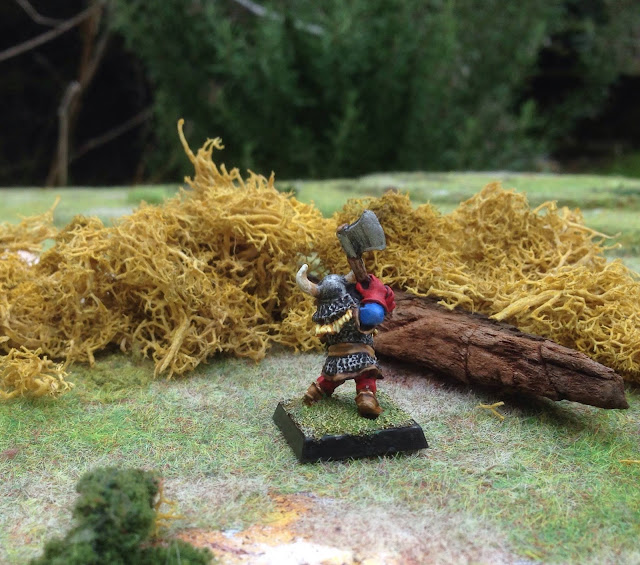 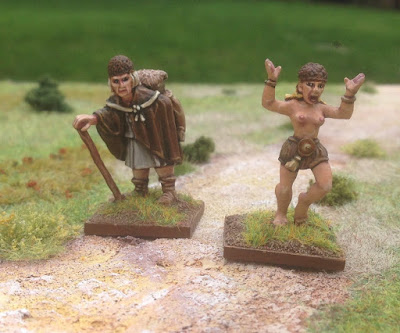 Here are a further two models from the excellent (and critically overlooked) Bronze Age range from the Wargames Foundry. This series of models has long been a guilty pleasure of mine and link rather tenuously with the raison d'etre of this blog but... they were sculpted by Citadel stalwart, Michael Perry, and are cast by the Ansell family. Could anything have a purer pedigree?

Unnecessary justifications aside, they are a characterful and unusual collection of models and one I really enjoy researching and painting up, largely due to my background in archaeology and the Bronze Age in particular. I have written about this period several times before (Egtved Girl and Bronze Age People) and will no doubt return to it again in the future.

The male figure here must be based on the elderly man excavated from a barrow in Borum Eshoj in 1875. His inhumation was discovered alongside two others and are often considered to be a family group by prehistorians. Whether or not there is any truth to this suggestion is unknown to me as I couldn't find any recent DNA analysis of the remains (if such a process would be possible after nearly a centry and a half of modern contamination and damage) or indeed if Bronze Age notions of 'family' would be the same as our own.

All three individuals were found encased in oak-wood coffins. Wood chips recovered during excvation suggest that these coffins were fashioned on the spot and analysis of the tree-ring evidence results in a date of 1351BC for at least two of the coffins, if not all three. These individuals have been identified as a male, aged 50-60, with a female of the same age with a final inhumation which was much younger and also male, with skeletal analysis suggesting he died in his early 20s. The burials show strong evidence of having been treated with respect and consideration, and lavish grave goods were interred alongside them suggesting these individuals could have been high status.

These graves remain the largest single find of its kind in Denmark.

So what of the elderly man? What have us moderns learnt about his life and death and how representative are these facts on Michael Perry's figure? Let's have a look at a modern photograph of the remains and compare then with the miniature.

The clothing preserved on the elderly man's body is very similar to that of the younger man - see my previous post about Bronze Age people to see the minitaure version of him - with a similar kidney shaped cape, kilt and round-crowned hat present. This body was so well preserved that the muscles were still holding the limbs together it had to be dismembered for transport back to Copenhagen! Despite this rather brutal treatment (not uncommon in the Victorian Age) there is much that can be learnt from him.

His nails were will manicured and his face clean shaven when he was buried, with both pieces of evidence being present on the miniature. He lay upon a cow skin, like the other burials in the group, and was covered with a woollen blanket. Foot cloths covered his feet, consistent with the model, and a belt held up his kilt. All these textiles were fashioned from wool and the only other object on this grave was a wooden needle, which attached the cloak's collar and presumably held the garment taut below the neck. Again, this detail has been added to the model.

Other Danish finds allude to woollen tunics as shown on the model and the illustration below is as good as representation of the style as I could find, clearly having been inspired by the Borum Eshoj group. This image also inspired the colour scheme of my paint job, though recent analysis of fabrics at Must Farm suggest that Bronze Age fabrics were much more vibrant than this and that the process of preservation often stains textiles a dark brown. Still, I liked the colour combination and stuck with in for this model. 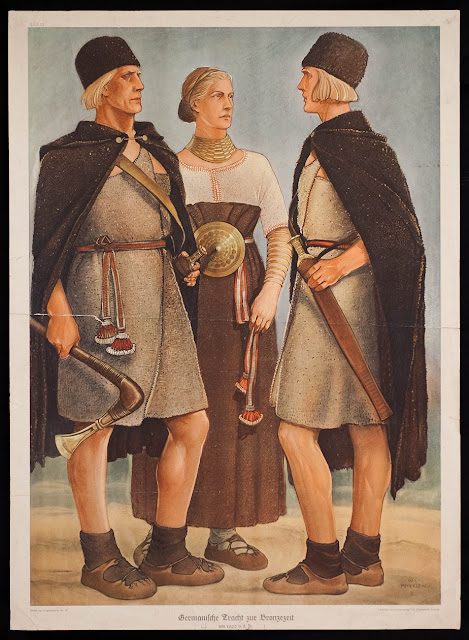 The female figure is clearly a second representation of the Egtved Girl model only this time she has a rather fierce counternance and is posed in such a way as to suggest dancing, with the textile hair net, skirt and sun-disk present. Though there are no physical human remains to suggest that Bronze Age women or girls dressed this way or indeed did any dancing at all, we do have a representation from Danish prehistoric art thanks to an 18th century find known now as the Grevensvaenge Hoard. 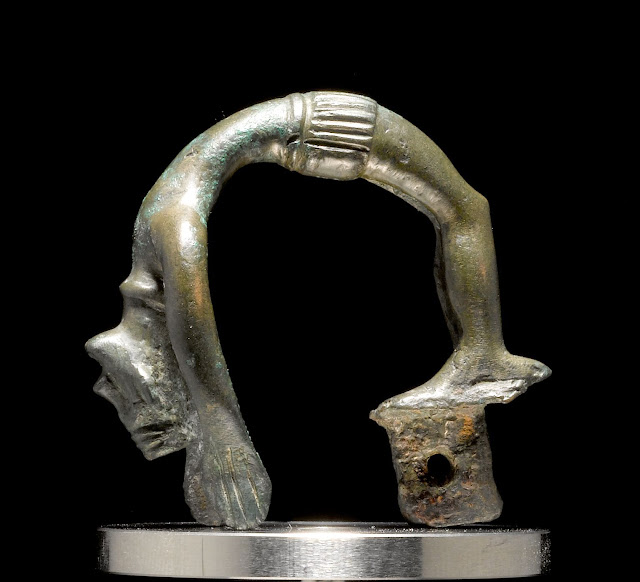 Originally, there were seven figures recovered as part of the hoard, but now only two survive. They are first mentioned in 1779 and have been dated to between 800BC and 500BC, so the tail end of the Nordic Bronze Age. A drawing of four of the figures was made during the eigthteenth centry. This illustration shows two kneeling figures of warriors with horned helmets and axes, a standing woman and most intriguingly for us, an acrobatic figure in a strikingly similar skirt. Based on comparisons from petroglyphs from the same era and geographical location, it has been construed that the figures were once part of an ensemble arranged on a ship, and the tangs certainly promote the idea they were once affixed to something else. 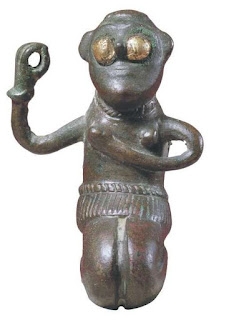 Nor is this an isolated find, other bronze figures from Scandinavia exhibit similar details. The Fardal figure (shown above) shows a seated female figure wearing the Egtved Girl's corded skirt and some kind of necklace. She is depicted holding her left breast and presumably a second object, now lost, in her right hand. Gold disks have been inserted into her eyes and these have been interpreted as another symbolic reference to sun-disk worship.

So did they dance, as suggested by the Foundry figure and the musings of prehistorians? There is certainly evidence to support this from the metal work recovered from the period, and dancing is after all, a peculiar human trait associated with 'special times' during the year or an individual's lifetime. The 'first dance' in western wedding tradition is nothing more than that, a tradition or ritual. A clip of a modern interpretation of what this dancing may have looked like can be found here.  Still, the existence of these figures amused me considering my long fascination with toy soldiers. Our 28mm high figurines have a great deal in common with these prehistoric examples and it is funny to consider some Bronze Age Bryan Ansell type crafting these models thousands of years ago.

I wonder which edition of Warhammer they would have preferred? 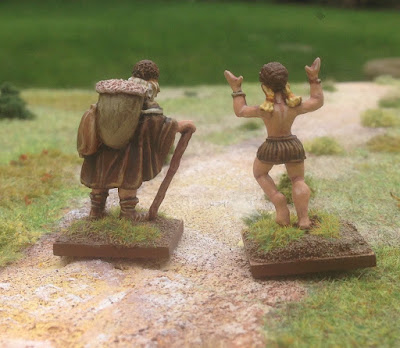