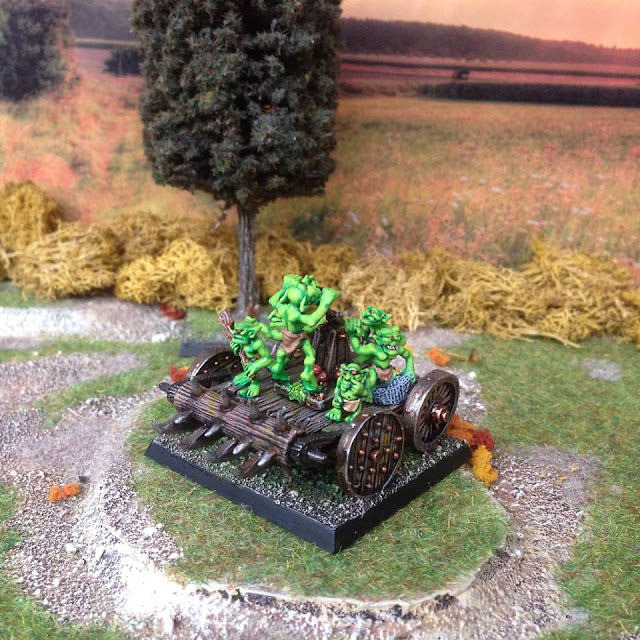 I had a bit of luck a few days ago, I located the missing handcrack from this model among a collection of Warhammer bric-a-brac. Truth be told, I was concerned that I had lost it during the move as this was the last model I worked on at my previous residence.

With the missing piece in my possession, I spent the odd minute here and there this week finishing off the piece. This time was mostly spent touching up the painting on the snotlings (using this colour recipe) and sticking the tiny models onto the surface of the pump wagon. The finished result, I am sure you will agree, is great fun and easily ranks this model as amongst Warhammer's craziest moments. 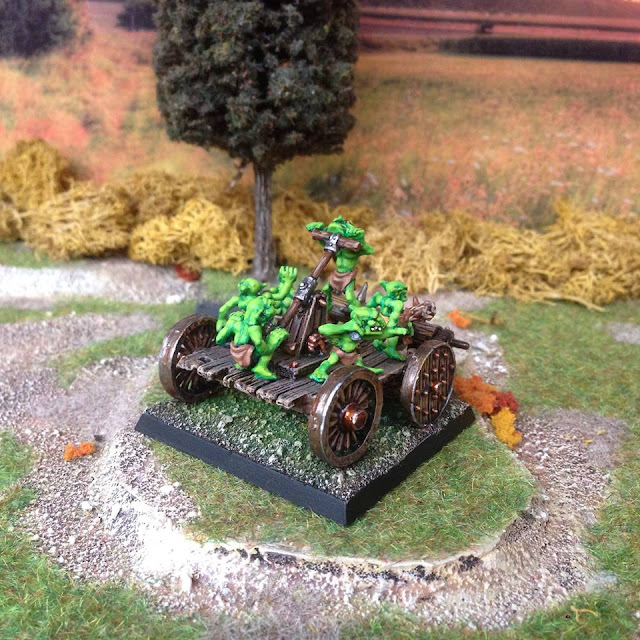 Painting wood has always been one of those bugbears all painters have for me. The finished result being either too artificial looking, or too washed out. It took me a while, and plenty of washes, to get a look I was happy with here and I think the completed effect suggests manky, half-rotten wood quite well. Just the sort of stuff snotlings would no doubt build with. 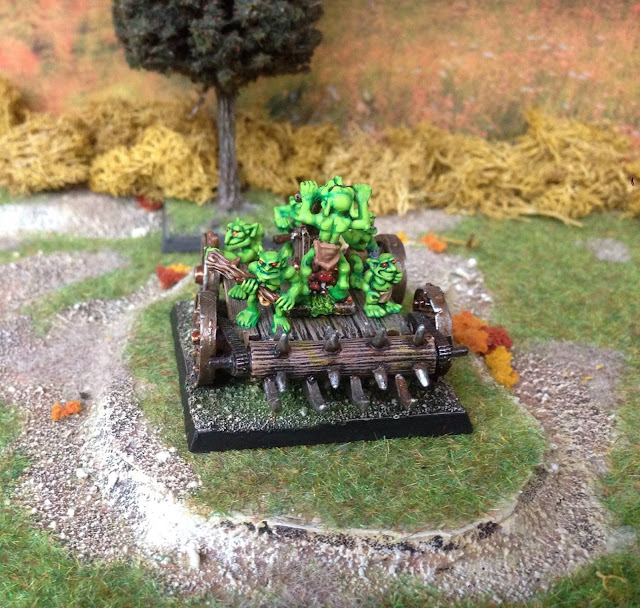 This is, of course, the single story version. I have had be eye out for the more substantial two decker of this model for sometime but I have yet to be successful in acquiring one for a decent price.

All in all, an iconic 'must have' Warhammer model painted, based and now part of my collection. 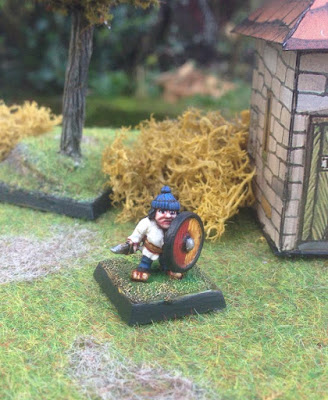 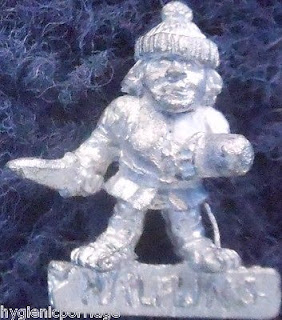 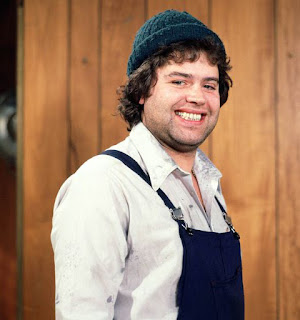 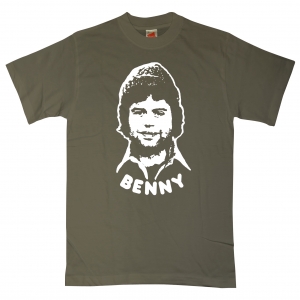 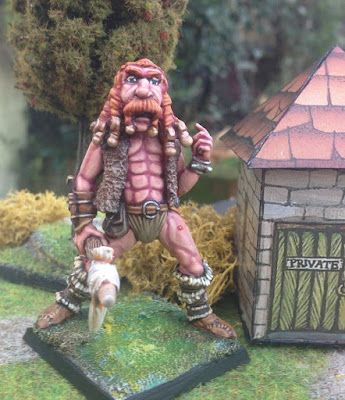 Another weekend, another opportunity to get back into the swing of things. Actually, I am fibbing a little here, as some of this model was started in the week but I managed to complete the model this morning. Having painted oodles of barbarian types over the years (and rather enjoying the theme) this C22 giant just painted itself and was a joy from beginning to end. I guess I must have spent four hours working on him once the basecolours were painted and shaded in ink.

Of course, this model represents Een McWrecker's giant repairman in-game and is involved in the action at Dungal Hill - the fourth of the McDeath scenarios. The model was a particular bugger to get hold of as I was repeatedly outbid every time the model came up for auction. I now lack just Sandra Prangle though I do have the 'Renate' version of the sculpt, which is very similar. 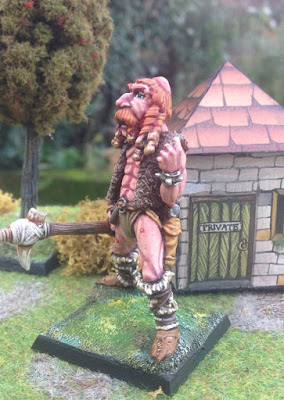 Eagle-eyed readers will no doubt have noticed the McDeath Toll House lurking in the background. At this present moment in time I just have this single model, and will need to source (or scratch build) a second one in the future. Though playing any further scenarios for McDeath is still a long way off at the rate I work, so no need to panic just yet.


Curiously, many previous gamers have chosen to mount this giant's weapon in the raised left hand. When searching for inspiration online I found several examples of the detachable weapon being placed in this way, which quite frankly made the model look rather ridiculous with its empty gripping right fist. Looking at my completed model, I like to imagine that Markul is rather proud of his ginger locks and is reaching to twiddle his golden baubles as he contemplates which stuntie he'll squish next.

Right, off to paint once more. I have a second McDeath model on the workstation and I have challenged myself to paint him in one hour. So expect to hear from me again soon.

A Thank You from Kevin 'Goblinmaster' Adams

Kevin Adams contacted me this week with some very sad news. I will had over to the Goblinmaster to explain what has happened and why the Oldhammer Community is involved, albeit in a very small (but positive) way.

KA: My Mother passed away just before Christmas due to cancer and I've donated the money from Oldhammer to the trust that looked after her in her last few weeks.

Please spread the word so everybody is aware their money has gone to a good cause. The amount was £125 but with tax credits its £156 .25

As many of you will know, Kev has worked tirelessly at two Oldhammer Weekends to sculpt faces onto all manner of models. Some of you will even be lucky enough to have such a model in their collection.

Glad to see Oldhammer isn't just lead and paint, but it is also heart! (; 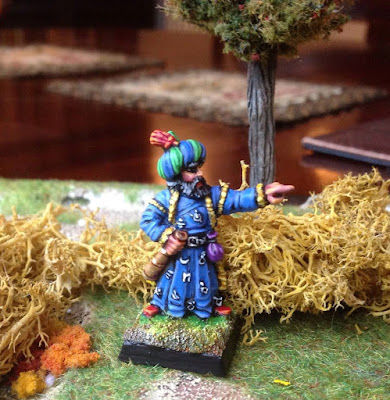 It's been a long time since I posted anything here, and longer still since paint met brush at my work station. My absence from anything Oldhammer, beyond a few minor admin duties online, has been far too long and has been caused by illness. At least I now know what is up, having previously been told I was suffering from a hernia, and I am waiting my date to go under the knife. I have found sitting, even for a short time, quite uncomfortable and concentrating on painting intricate Citadel miniatures to an acceptable result, impossible!

In the interim I have taken up cooking. I have learnt how to make a roux, butterfly chicken and use a plethora of new spices. My wife and I have never eaten better! Miniature modelling and cooking have much in common - selecting colours, fine knifework and success through careful preparation and planning just three. Still, its hard seeing others base out quality figures while you stand idle.

However, having implemented several lifestyle changes since my diagnosis, the discomfort of sitting down has decreased and I decided to have a go at knocking out a miniature this morning. I set myself a limit of two hours painting time, with plenty of getting up and pacing about and the Arabian wizard you see before you is the result!

I am very pleased with him, having thought that my skills would have gone soft. He is of course one of the Citadel/Foundry 'Time Warped Wizards' that were released last summer at Oldhammer IV, and which have since become part of the Warmonger range. He has all the trappings of a celestial wizard; telescope, pince-nez and astronomical symbols on his attire. 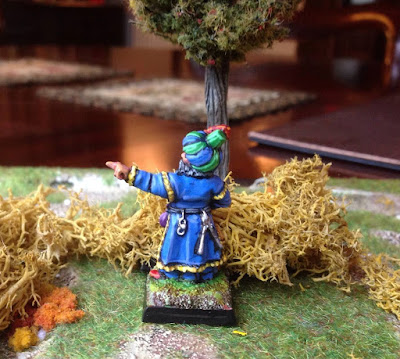 According to the Collages of magic article I am using as inspiration for this project, celestial wizards are rather ostentatious in dress, flamboyant in speech and delicate in general disposition. In most cases, this manifests itself in grace and fine manners. The popular view of the college across the Old World is slightly different with celestials being portrayed as overdressed fools who spend a fortune on fine foods, majestic wines and finely wrought artwork - they sound uncomfortably like the author of this blog!!

So plenty of background material for games!