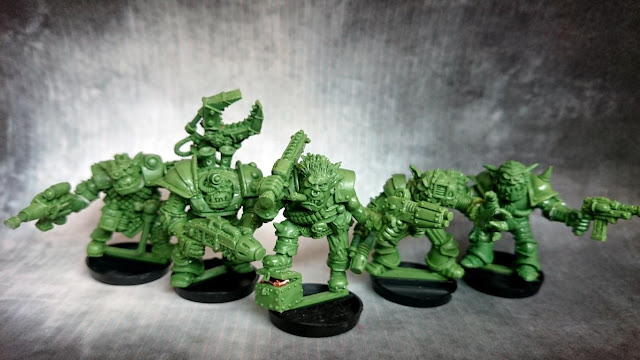 Hello all! No sooner was I back at the paint station working on a few Nurgle pieces then Diego (Pantheon of Chaos mastermind) dropped me a line about another one of his projects. 80s style Rogue Trader style orks from Kev Adams and others!


The greens you have seen above made my jaw drop and smile at the same time. They are both crisp and modern but seem to step out of an 80s issue of White Dwarf.

But what else would you expect considering the names involved? 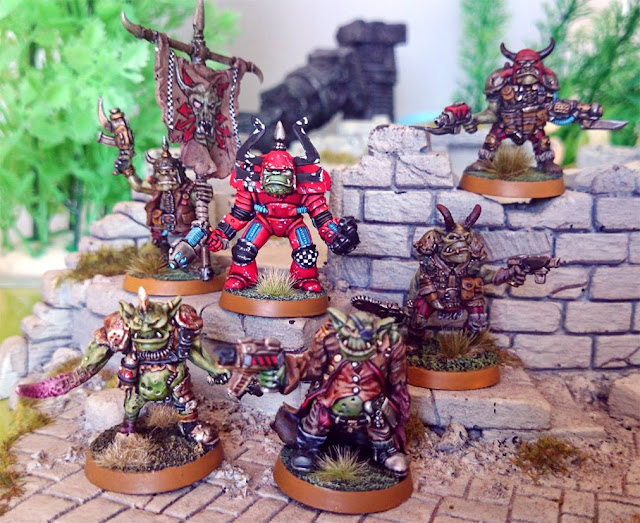 The sharp eyed among you may recall a similar project put out by Diego a while back. In fact the painted models you can see above were part of that project if my memory serves me correctly. Those were excellent but these new sculpts surpass them in many ways.


Just look at the design and sculpting prowess in this green below! 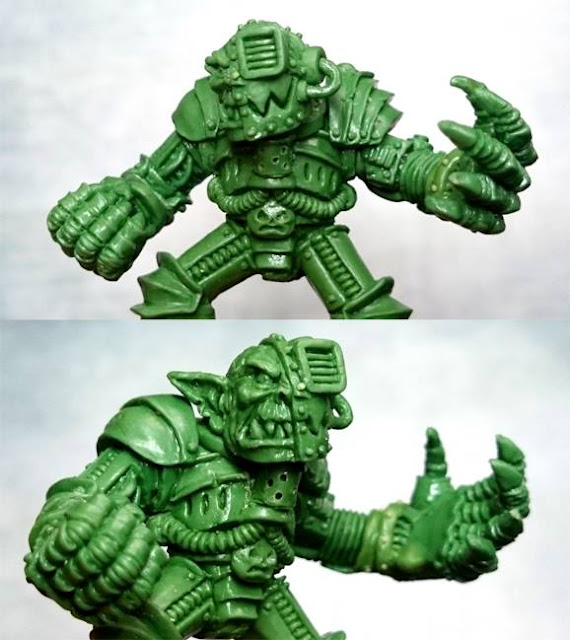 Incredible eh? As I said, Kev's new space orks step right out of the glory years of Rogue Trader and beg you to paint their armour red and scrawl 'kil 'kil kil' across it!

Here is a closer inspection of some of the characters available. 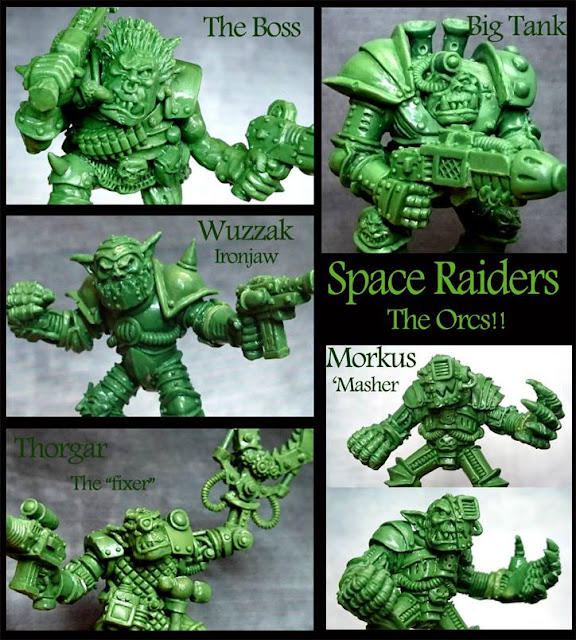 Diego explained to me that many of the models you see here have interchangeable parts and so many different combinations are possible. Take a look here for an example. 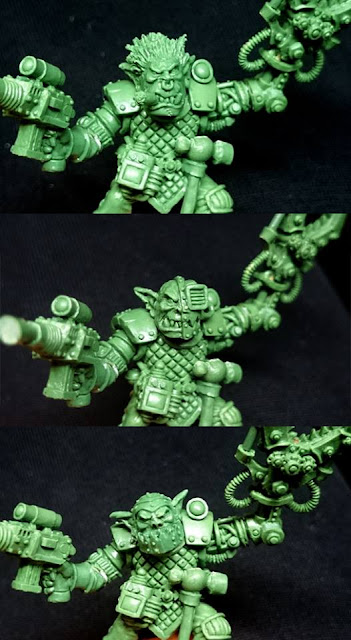 Then there is the important issue of scale. As you can see from this side by side the measurements are bang on classic 80s Rogue Trader! 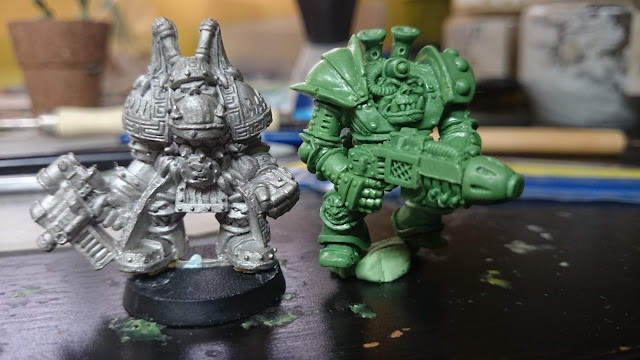 There is also a Rogue Trader style Grom the Paunch! 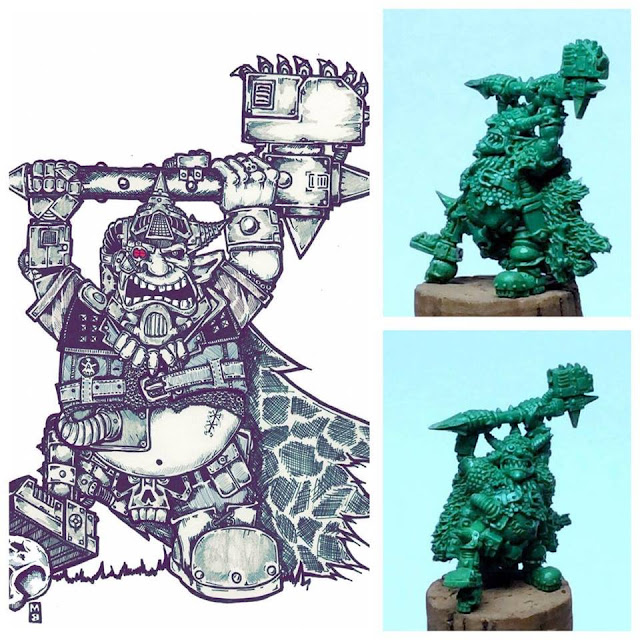 Of course, this being Diego there are plenty of future plans too. I will leave you with a quick glimpse of these before I go. 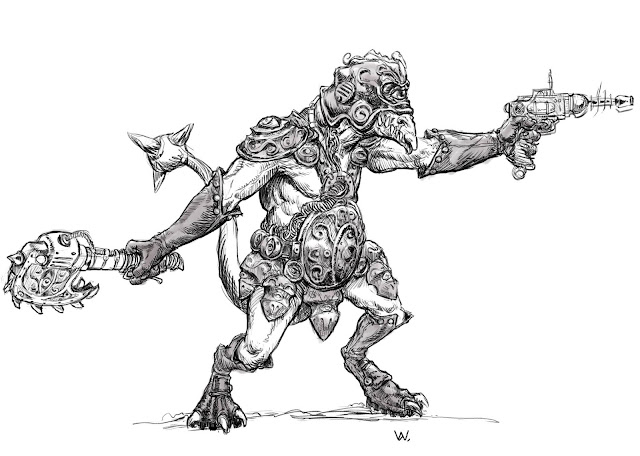 As we have come to expect from Diego the project is already funded but if you are interested in jumping on board the link is here:

A Tale of Four Oldhammer Gamers: May 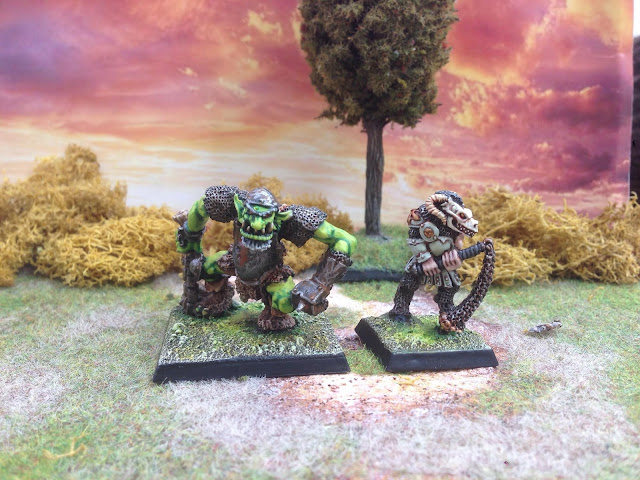 Hello again dear readers. It has been some time since I last posted here (or anywhere in fact) I know, and things will remain sporadic at best over the next couple of months I am afraid. There is a great deal going on in my personal and working life at the moment and opportunities for Oldhammering are few and far between. Luckily, I was able to spend the entire day today (bar the time to complete the usual household chores) sitting at at a rather cramped and temporary painting station hopelessly daubing paint onto a couple of vintage Citadel models. 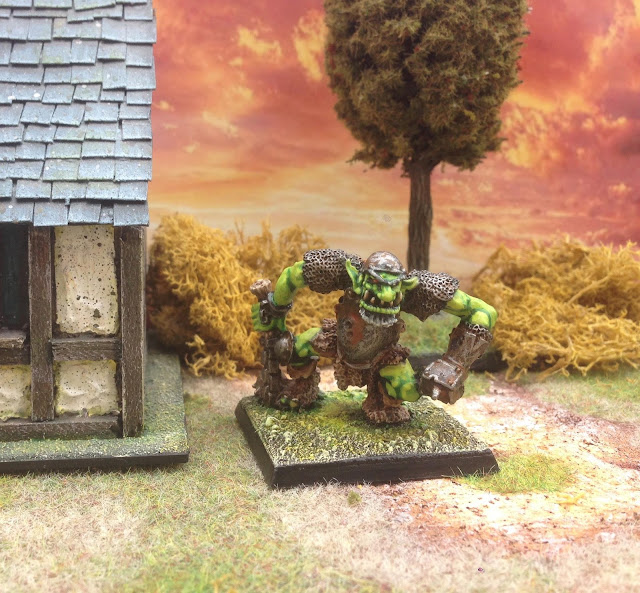 The first of my endeavours to see completion was this rather nice Warrior Troll (check out this blogpost for more detail about troll typography) I have had in my collection for sometime. He had the misfortune to be undercoated and based some months previously, but I never quite managed to get beyond the 'picking him up and looking at him' stage. Wanting to tackle something 'big' (by this I mean easy) after a month or more away from the brushes, I decided to include him in my Nurgle army. 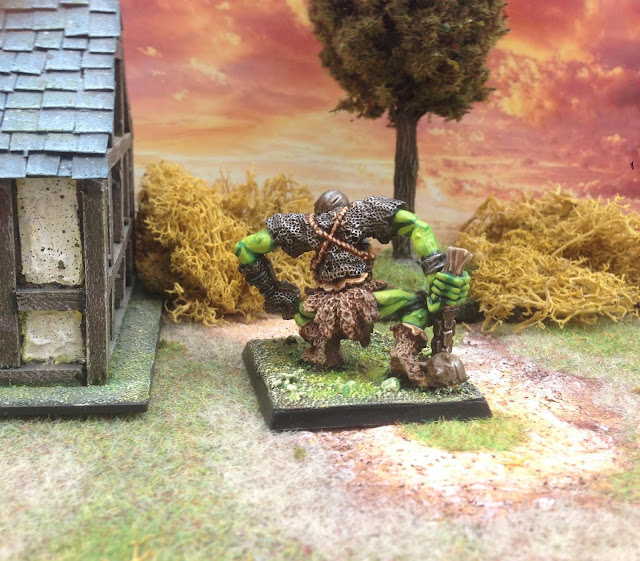 Nurgle is a very forgiving master when painting. Dribbly bits, messy brushwork and peculiar blobbing all fit the Father of Flies' style perfectly, so the rusty painter is wonderfully supported when working on miniatures in his ilk. I used the some green recipe I have been mucking about with recently for the skin and used drybrushing and washing for the rest of the model. I was very pleased with the rust effect I achieved using a orange paint/chestnut ink wash but my dodgy photograph above doesn't really do it justice.

This model will represent a minor troll hero in my army and will weigh in at 115 points. Despite the stupidity risk, trolls can do incredible damage in games and can of course regenerate too. Perfect attributes for a small, elite army like mine. The heavy plate and mail gives a better armour save than usual too. 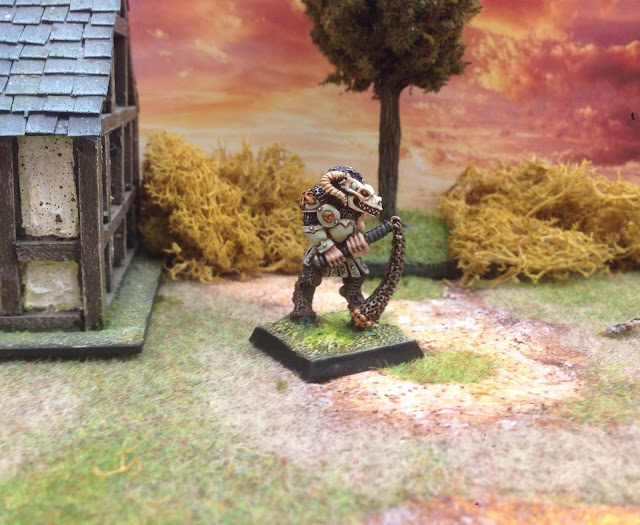 The second model I worked on came from an aborted Nurgle army I started three years or so ago. Originally, I was going to use this figure as part of a wider Nurgle force once A Tale of Four Oldhammer Gamers was over. However, my painting has moved on since he was completed and looked rather shocking in comparison with my more recent work. This came as a surprise really, as I had considered this figure's paint job one of my all time best. It was originally painted at a time I used a great deal of white to highlight models and this resulted in quite chalky, pale finishes rather than the inky brightness of my recent work. So, I decided to repaint him. Being pressed for time, I opted to just paint over the top of my earlier work rather than stripping him completely. I kept much of the original paint scheme too, though the skull, armour and flesh have all seen extensive reworking. 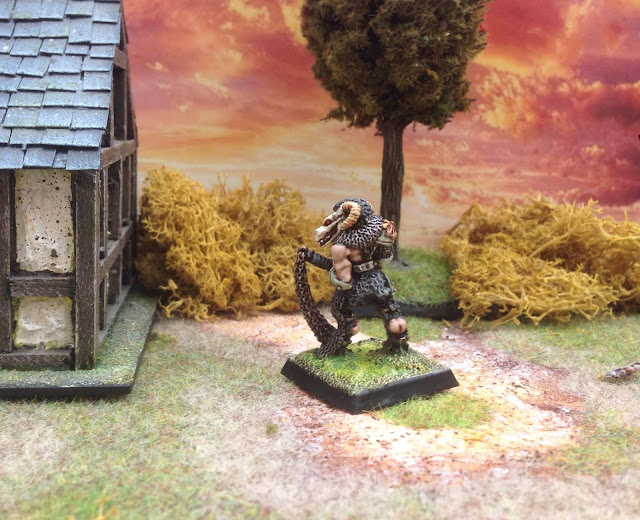 He now fits in with my other Nurgle pieces very well. I unearthed another five poorly painted Bob Olley Nurgle beastmen alongside him too. These poor mutants have never even graced a gaming table as far as I can recall. They are now awaiting repainting in the near future. Well, relatively near future! Perhaps by the end of June?

Back on topic, this beastman will lead a unit of seven models and has been beefed up as a Pestigor Champion in heavy armour and wielding a double handed weapon. He weighs in at around 60 points by my reckoning and he brings my total to 175 points this month.

Not bad for a day's work.

The incredibly successful Kickstarter from Pantheon of Chaos is drawing to a close and has raised over 37,000 euros at the time of writing. That is over 30,000 more than the original goal. An astounding return on a frankly outstanding range of models. They are in the closing hours of the Crowd Fund now and it really is a case of 'if you want 'em, this is your last chance!'

Diego has been kind enough to share some more details with me and being the dilligent blogger that I am, I am passing them on to you. It would have been sooner if I had access to a reliable computer, but then life is rather topsy turvey at the moment in the count down to our house move.

Anyway, by now you would have grown tired of my words and let your eyes wonder over to those wonderfully painted models that I began this post with. Don't worry, there is more to come and if you are new to the project (and if you are, where have you been?) you better hurry and follow the link at the bottom of this blog post. 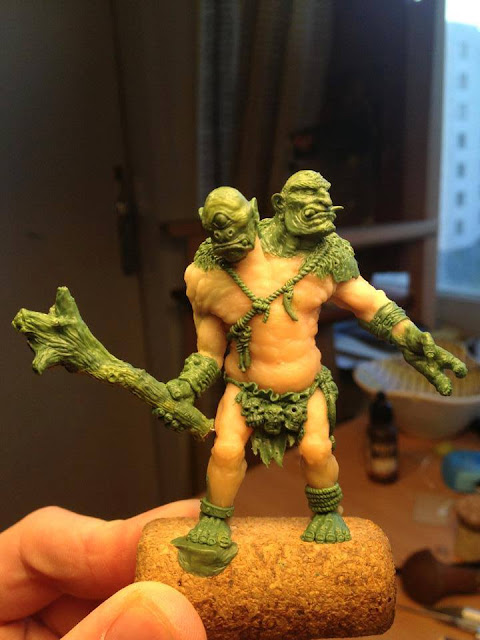 Okay, first up is Christian's Ettin. As we have come to expect from Pantheon, the sculpting is excellent and a mass of detail has been provided to help bring the character to life. I like the mutated nature of this one, especially the two digit hand and the cyclops head. A nasty chap would you wouldn't want to meet strolling down the street on a Sunday afternoon.

Looking at him makes me wonder - how do the Pantheon boys keep banging out models with such a high degree of detail and imagination? They remind me of a simple bunch of hyper-creative guys and gals from the 1980s!! 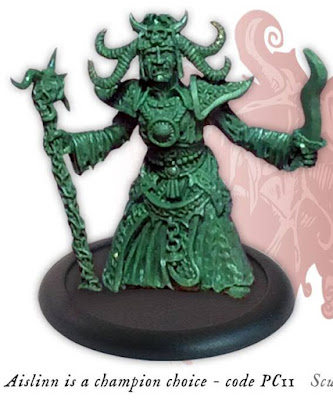 Talking about the Design Team of the golden age, do you recognise the work of one legendary sculptor here? Keven Adams has contributed two additional figures in the guise of these variant wizards and I am sure you will agree that these are rather unusual coming from the goblinmaster. As Diego put it "the level of detail is insane" on these are they closely match the baroque designs seen in the Realm of Chaos books all of those years ago. 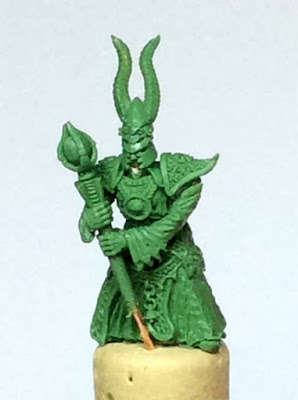 I don't know about you, but these models make me think Tzeentch or some other magical/chaotic power favouring the arcane arts. 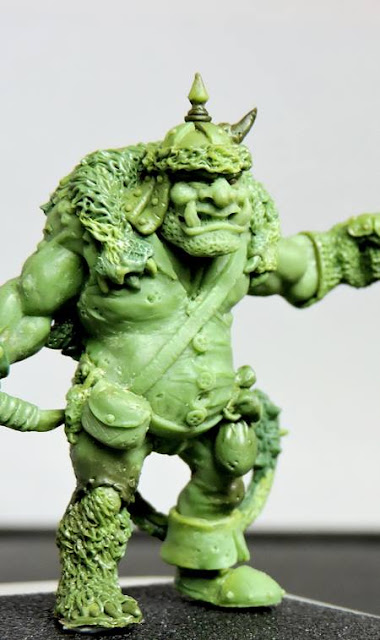 Diego is responsible for this crossbreed Ogre. He has a bear leg and some kind of prehensile tail combination going on. The sculptor was going for a subtle look here, as he wanted the model to show a character some time away from developing into a chaos spawn. Again, the high level of detail and imagination is there to see.

How do they do it? 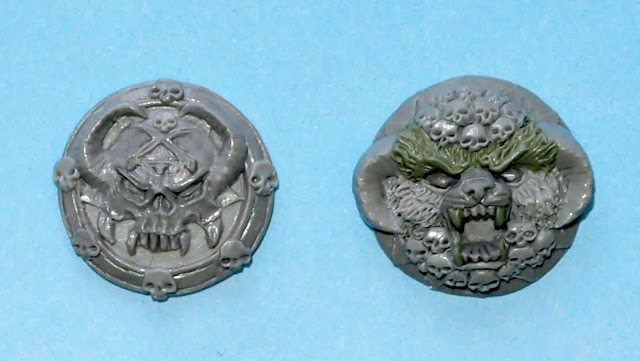 Tim Prow is responsible for these wonderful shields. I am not sure which models these will be released with, or if they will be used as a shield lot at some later date. I am sure Diego will appear on the comments section below and explain all shortly! (; 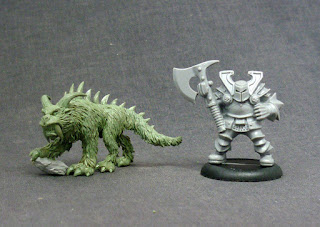 And finally, on our final whistle-stop tour on this project, a chaos hound by Boris. This model will come with a second model with a differing head. The plastic chaos warrior is used only to present scale - so don't worry that the sculpting standard has suddenly dropped!! (: 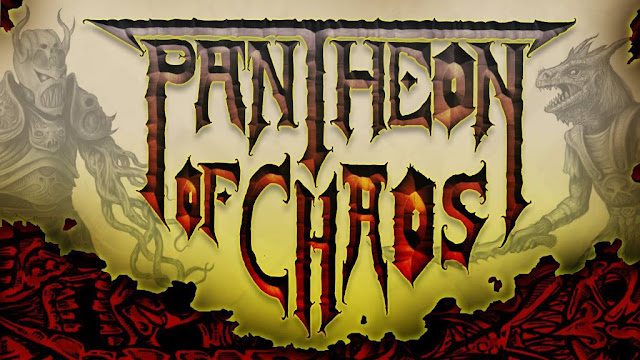 As I said earlier, this crowdfund is drawing to a close in a matter of hours. If you haven't got on board now then you are running out of time.

Here is the link!