I have finally completed my first undead unit; a regiment of grim reapers! To those of you not in the know, this means that the fleshless ones are armed with that symbolic weapon of death itself; the scythe. It was fairly easy to whip up six new skeletons using my horde set and the remaining 3 were re-cycled from my stash of ancient plastic models that I recently unearthed in the garage (thank you dettol). A repair here and there was all that was required to welcome these venerable miniatures back into the battleline.

As to painting; unusually I went for a black undercoat and worked up with brown, bleached bone and then white, I found this a little more precise that the old 'paint 'em white and do a black ink wash' approach from my younger days. Still, even with the layers, these skellies paint up quick and the different posed legs are a real bonus after painting a new Vampire Counts army a couple of years ago- no more legs stepping forwards enmass!

A quick consult of Warhammer Armies suggests that a 3rd Edition undead army should have a least 10 of these  beauties but I chose to round out the unit with a metal command figure. 'Reaper' was the skeleton for the job, released alongside a metal chariot back in 1987, and rather hard to find these days undamaged. I have several models of him but they always seem to be missing the severed head and hand, no doubt a relic for many a late 80s conversion effort. 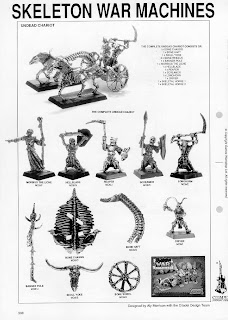 The Machineries of Destruction Undead Chariot - look there's Reaper! Keep an eye out for the rest of this set in future posts!

When painting him up I had a little niggling feeling I recognised him from somewhere? Or that he reminded me of someone but I couldn't put my finger on it. Then, just as I was finishing of his ginger hair, it hit me! Axl Rose from Guns 'n Roses!! W. Axl Rose- legendary rocker armed with a microphone stand (I always did wonder why he needed the gigantic sponge thing on the the end of the mikes he used!) 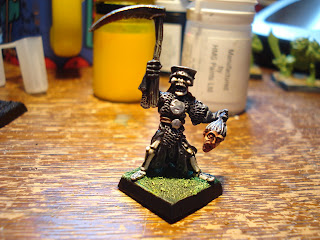 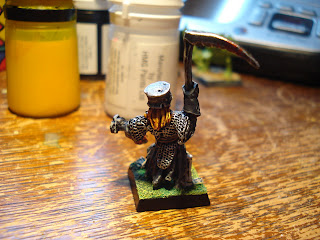 I decided to re-name the model in honour of the long haired, tight short wearing 80s rocker; but rose was not quite 'Warhammer' enough. A quick google of rose in German game me... die rose or die brause. I think that I will take brause which gives us the name Axl Brause, skeleton champion extraordinaire!

So here he is with his grim reapers... The first completed unit for my Third Edition Undead army. 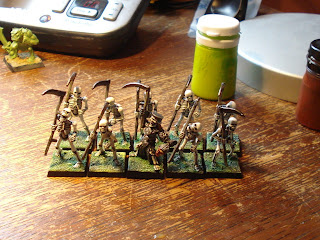 Back to my orcs and goblins now!