The Walls of Contagion Battle Report Part One

There never seems to be enough of it.

There always seems to be too much of it.

These two combine in myriad ways to prevent leadheads and gamers from meeting up and playing games of any sort, and this is especially true of retro Warhammer 3rd Edition games in my household. Dan and I hadn't met up for a couple of months (due to the foilables of modern technology, largely) and out of the blue we had the opportunity for a game. Sadly, I had had a heavy week and couldn't manage to set up much of a scenario. Secondly, I had managed to lose all the paper work and record keeping from our previous games (paper causing problems again!) so had to scramble around to get the game started. Luckily, Warhammer Armies contains full lists for all miniature types so we used that, with Dan flicking through his paperback copy of the 3rd edition rulebook for anything else.

We threw together an idea for a battle. I wanted to test out my recently completed Nurgle Warband and Dan was keen to explore that backstory of Ironcron - as I haven't finished the next figure for him yet! Oh dear! We summarised that Ironcron's patron, Khorne, had ordered the destruction of his rivals minions from an abandoned watchtower on the edge of the forest. Grandfather Nurgle was unlikely to give ground willingly so ordered his champion to hold the tower and repulse (if not infect) the Khornate interlopers. 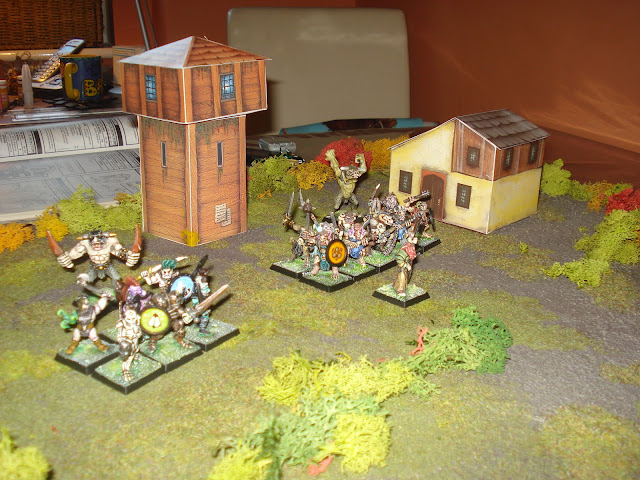 As discussed previously, I chose to play with the Nurgle Warband. Here are my forces at the beginning of the battle, centrally placed in the watchtower's precinct. From left to right we have; A unit of five thugs lead by my champion of Nurgle, the minotaur, a unit of ten beastmen, a chaos sorcerer and a second minotaur. No special weapons were involved as I had lost the character sheets over the last couple of months and we didn't have the time for a protracted, detailed game with lots of roleplay elements. 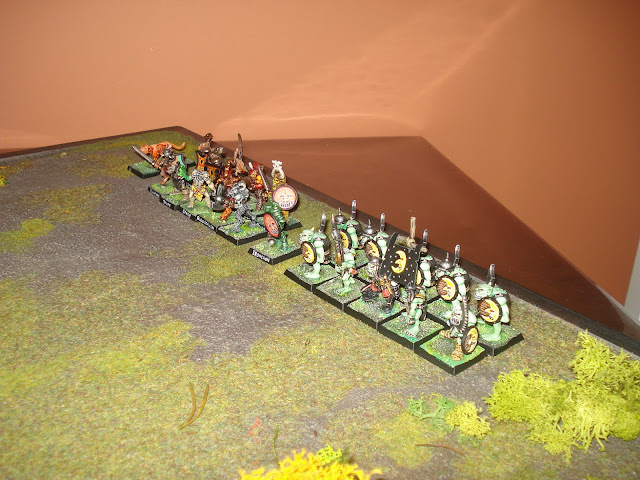 Here we have Dan's starting position. Obviously, he was attacking, as is appropriate when playing with a Khorne force. He was impressed with the recently completed orc unit and was keen to field them. Dan suggested that the greenskins were hired (or lured) by Ironcron with the promise of loot and were probably too stupid to realise that fighting Nurgle is a filthy and unhealthy business. So, from left to right, Dan fielded Mange, the chaos hound, a unit of ten beastmen, Ironcron himself and the orc regiment of ten orcs with leader, champion, musician and standard bearer. 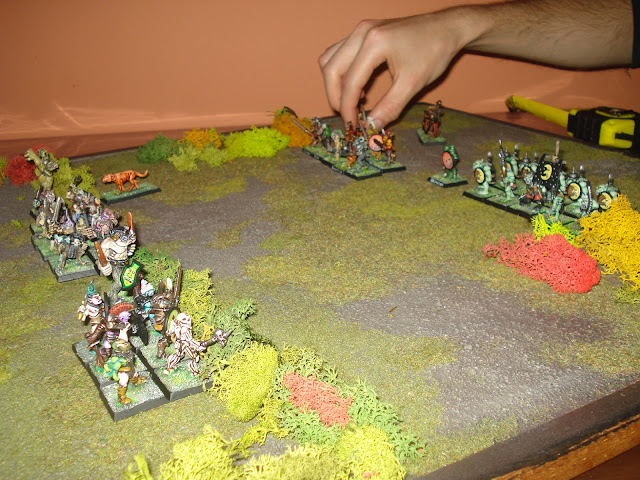 Unusually, I got to move first and advanced my units towards the hedge, intending to use this as a defensive position. The beastmen held the breech as they were the most numerical while the minotaurs added strength on either side. The Nurgle champion and his thugs held the right flank. Dan responded in suitably Khornate fashion, and advanced his forces in a cacophony of shield bashing and savage, warlike cries. The beastmen of Khorne moved to engage their Nurglesque bretheren at the gap in the hedgeline while the orcs advanced more carefully to attack the thugs over the bushes. Mange, the chaos hound, by far the most fleet footed model on the table scampered towards the undefended hedgerow, his drooling jaws snapping in violent anticipation of the feast of flesh to come. 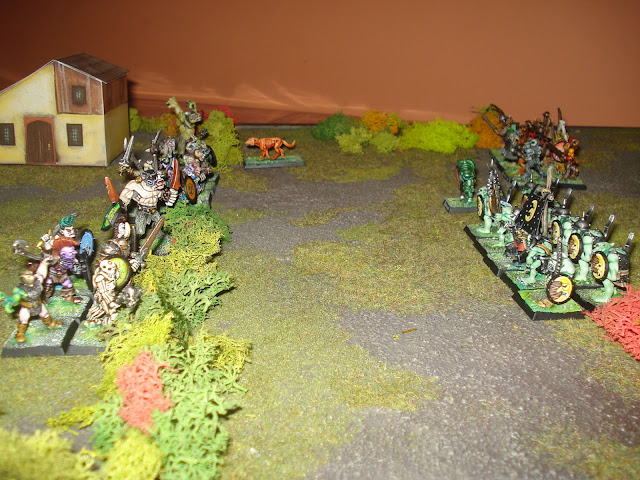 Ironcron moved alongside his goblinoid allies, though deferred the option of joining the unit or forming an association. My Nurgle Sorcerer moved to enter the watchtower and slowly climbed the rickerty steps. Casting the windows open with a scaborous hand, he peered his deformed head out of the window, eagerly awaiting the chance to unleash fireballs onto the advancing enemy. 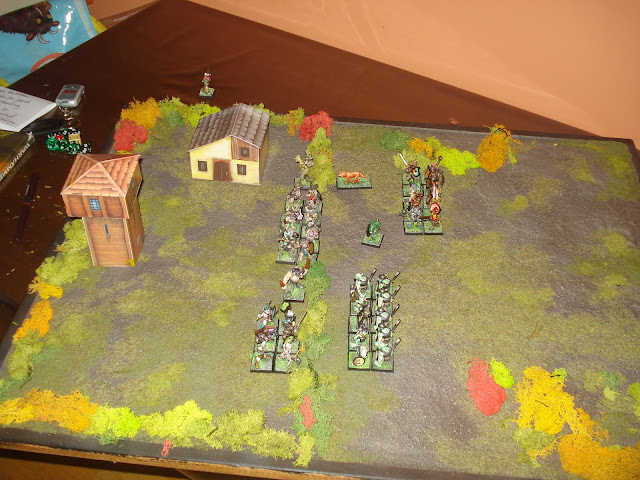 The sorcerer's magic was not as successful as I hoped. Magic points were spent and the fireballs were easily absorbed by the thick skins and chainmail armour of the orc regiment. Unperturbed by the firery assault, the greenskins advanced into charge positions and began to beat their savage swords against their shields in anticipation of 'bashin' a foo 'eadz' while the beastmen, their milk white eyes glaring maniacally at their foes, positioned themselves to engage my battleline. 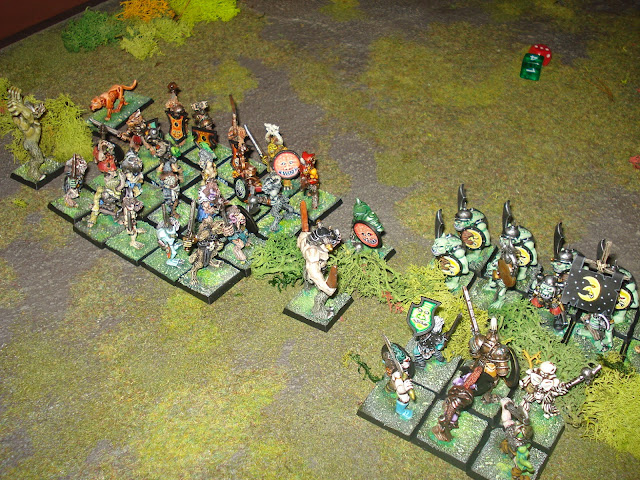 With an astounding crash, the forces of the Blood God collided with my putrid followers of the Lord of Pestilence. The beastmen exercised their violent tendencies in a frenzy of chopping, hacking and braying. as the orcs engaged the thugs over the withered, sickly hedge. Further fireballs of fizzing, green flame smashed into the orcs but the filthy creatures easily absorbed the damage with no wounds inflicted. Thankfully, the Khornate charge was contained by my forces and some pretty poor rolling from Dan (despite a few dice modifiers) only aided the Dark Lord of Plagues, with a single wound being sustained by one of my beastmen. 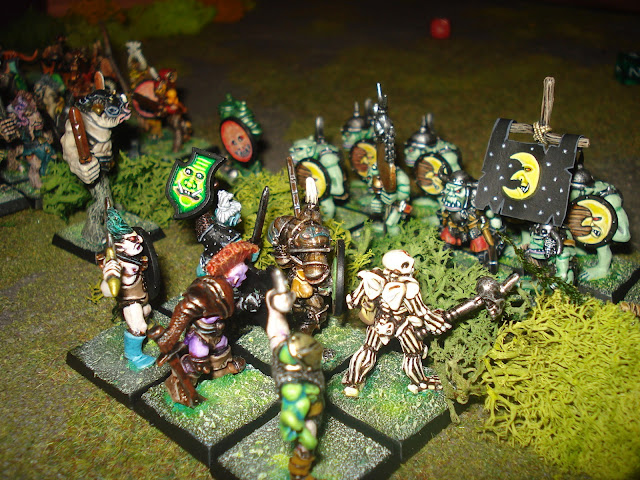 My third turn began with a series of hand to hand combats. The orcs battled with the thugs, Ironcron with one of the minotaurs, the beastmen slugged it out across the break in the hedge while Mange, that fleet-footed nightmare and Dan's trump card in more than one game, avoided conflict with the second minotaur and slipped through the hedgeline. Wounds were inflicted on the beastmen and an orc fell. Sadly, I lost the combat, and my beastmen were pushed back 2 inches, opening my defences rather dangerously. My sorcerer, his magic points depleted through fruitless magical bombardment decided to rest and observe the ebb and flow of the battle for his watchtower. 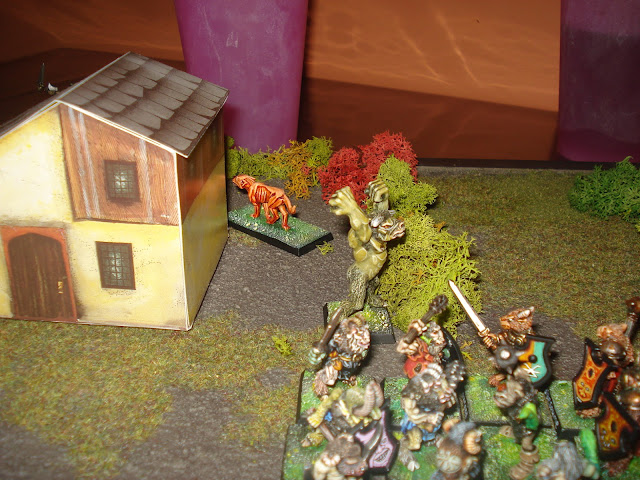 In Dan's next movement phase, Mange slipped past my minotaur and began to snake his way around the abandoned barrackhouse. Combat did not favour Khorne, with weak dice rolls predominating which allowed me to follow up on his beastmen and preserve my right flank, recapturing the lost ground. 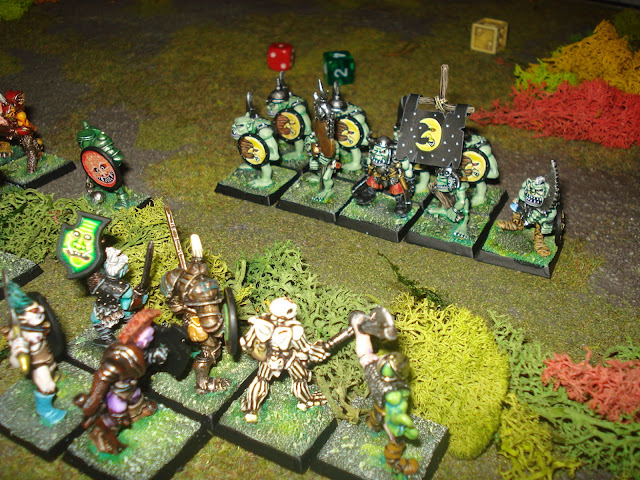 Despite felling two of my thugs in brutal combat, Dan found that he couldn't break the foul followers of Nurgle in the dance of blades. Passing a leadership test (thanks to the bonuses granted by his musician and standard bearer), the orc commander opted to disengage and march backwards in an attempt to charge once more in a desperate ploy to break the will of my troops. Wet, coughing jeers were quick from the lips of the Nurgle thugs as they watched the goblinoids organise a 'tactikal reetreet' back across the clearing. 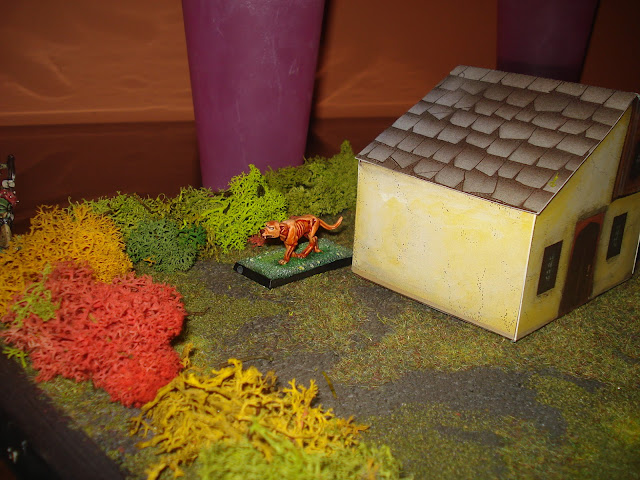 Meanwhile, Mange continued his circling of the old barrack building in an attempt to strike the forces of the Plague Lord in the rear. Thankfully, my minotaur smelt his bloodcrazed breath and moved to intercept his canine wiles. After another round of static combat (thanks to truly atrocious dice rolls on both sides) we took a break from the game for refreshments.