Here it is as promised. The first in a fairly irregular series of reviews of key issues of WD missing from the online torrents. This week, its issue 91 from July 1987. 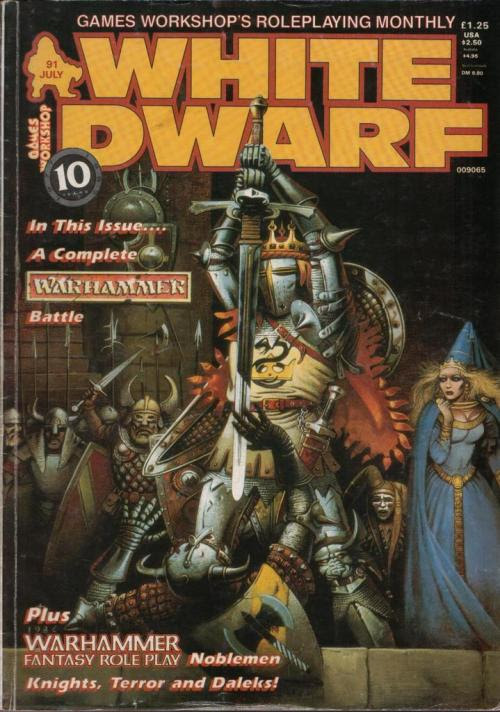 Let's put the issue into context.

If you were buying this fresh from the newsagents on day of publication, you may well have been considering the impact of the Single European Act on the UK, reading about the execution of serial killer, and cannibal, Vladimir Nikolayev in the Soviet Union or listening to Guns and Roses' classic, Appetite for Destruction on your recently invented Walkman or Ghettoblaster

Los Lobos were at number one with 'La Bamba' and were followed shortly by Madonna with ''Who's that Girl?'  Film releases at the cinema included 'The Living Daylights' 'The Lost Boys', 'The Lost Boys' and 'RoboCop' Sylvester McCoy was about to set sail in the TARDIS as Doctor Who and kids TV was still very much locked in the Broom Cupboard.

Onwards to the magazine then;

At the time of publication, White Dwarf was celebrating its 10 year anniversary. The previous issue had kicked things off with a range of interesting articles. Those of you not old enough to recall, WD was still primarily known as being a 'Roleplaying Mag' rather than a Games Workshop vehicle, and the majority of the articles reflect this.

Of interest to retro Warhammer player (and these rules are for 2nd edition mind, though are easily used in 3rd) are the following ...

The Great Imperial Dragon, rules and fluff page 31;
Colour miniature showcase for skeletons and fighters page 48 and 49
Blood on the Snow scenario pages 71-77

Additionally, the 'Eavy Metal article in this issue begins the first serious attempt to communicate with readers about how best to paint miniatures. This was the first time this was done and the next ten articles or so in the series are, in my opinion, probably the best sequence of articles WD ever published on the subject. Very wordy, thorough and useful. John Blanche and Rick Priestley take you on a journey from selecting and preparing your models, through painting and converting, to shields and bases etc. I am considering making a 'Eavy Metal pdf specifically about this if there is interest, so let me know if you want such a resource.

I will be housing the pdfs on my scribd account.

Here is the link.