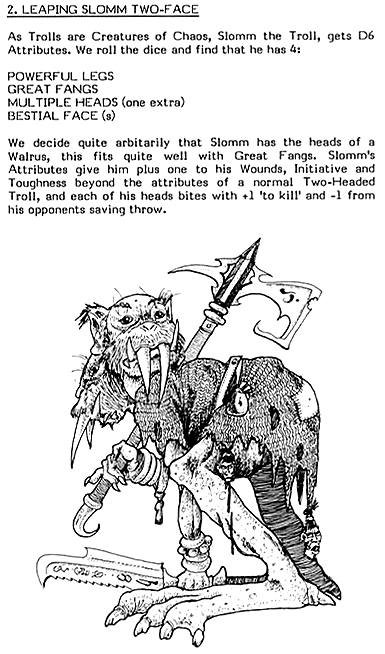 I expect some of you old hands and Oldhammer history buffs will recognise the image above. Its Leaping Slomm Two Face, one of the chaos characters used to illustrate the mutation system in the First Citadel Compendium back in 1983 (I think!). This really was a forerunner of what would later be published in Slaves to Darkness, and several examples of the creatures that could be made with the system where provided. Slomm was one of them. 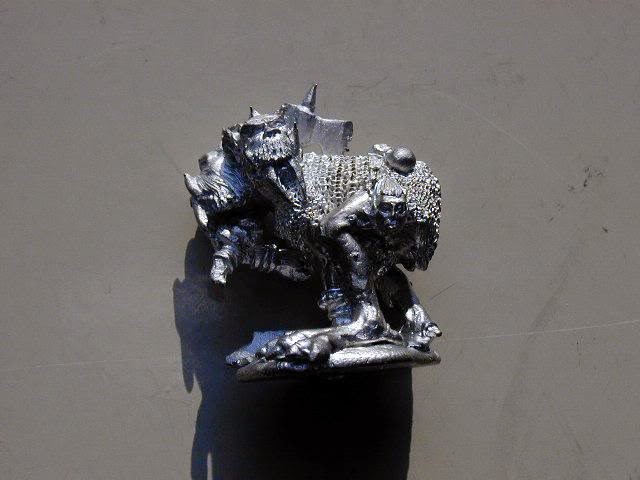 Like the other examples in that article, a series of limited release miniatures were produced to represent them, though sadly the Slomm example is now extremely rare - so rare I have never actually see another example save for this photograph and I believe that Steve 'Citadel Collector' Casey doesn't even own one!

Now that IS rare! 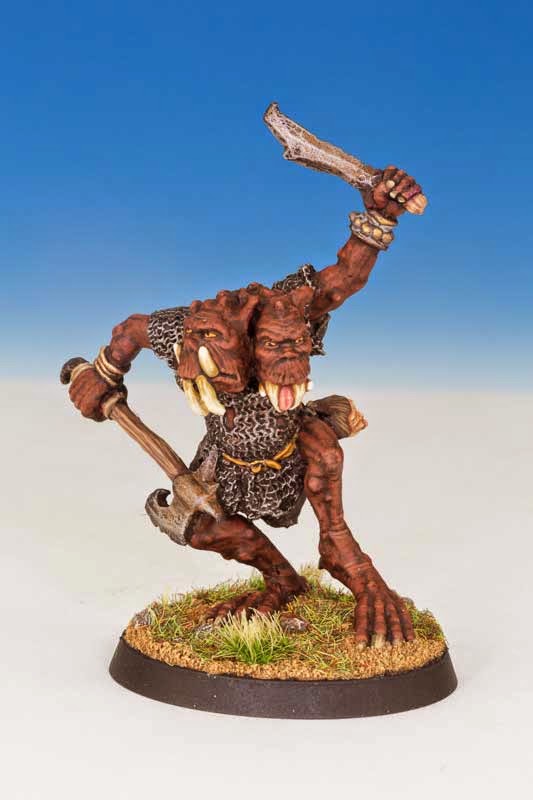 Later on, Citadel released a different version of Slomm, this one looking much more dynamic and aggressive than the first example - who to be honest, looked a little forlorn! This second example so fairly large scale production and can be picked up on eBay for about £15 or so these days.

Tim Prow, former 'Eavy Metal painter and Antiquis Malleum sculptor, had an example of this second model on his desk as he had long been a fan of the figure. So for no other reason that because he wanted to, and having a bit of spare time, he created his own 21st century version entitled rather provisionally 'The Son of Slomm'. Earlier on this week we shared a few teaser pictures of this model, but I am now happy to say that we can reveal the whole thing! 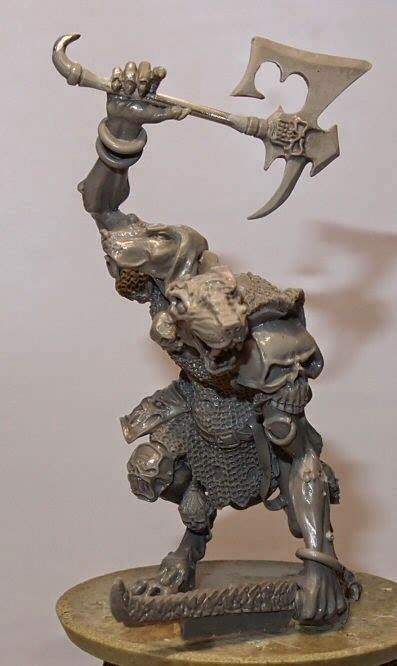 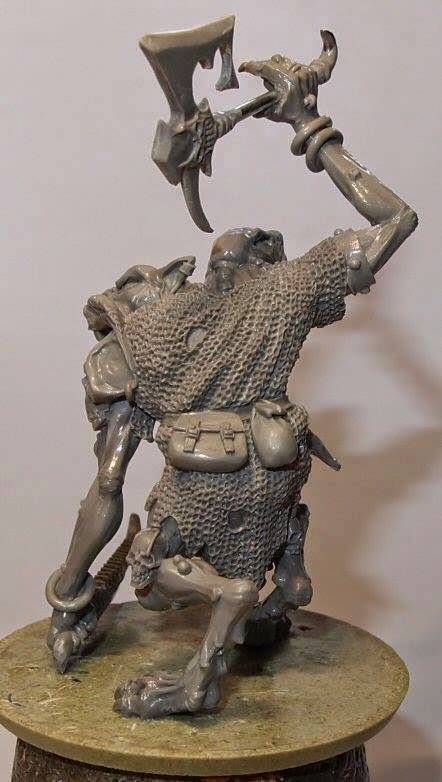 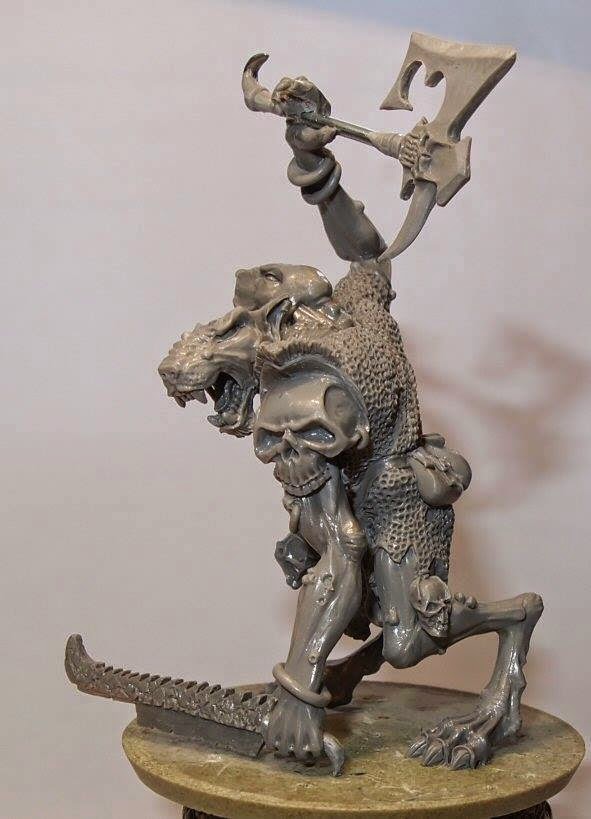 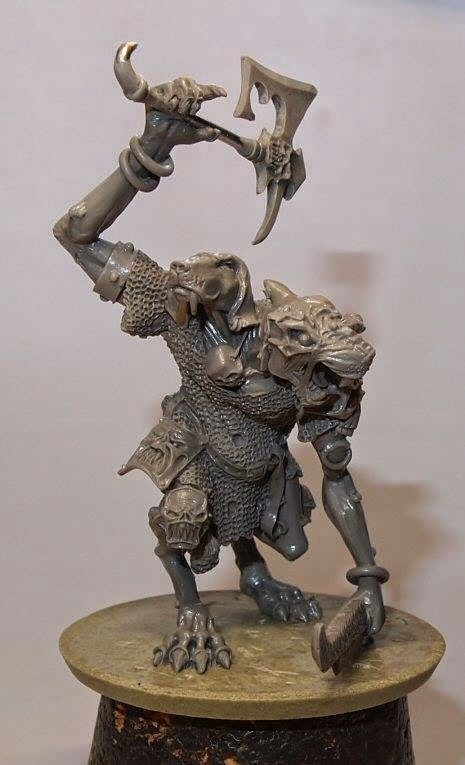 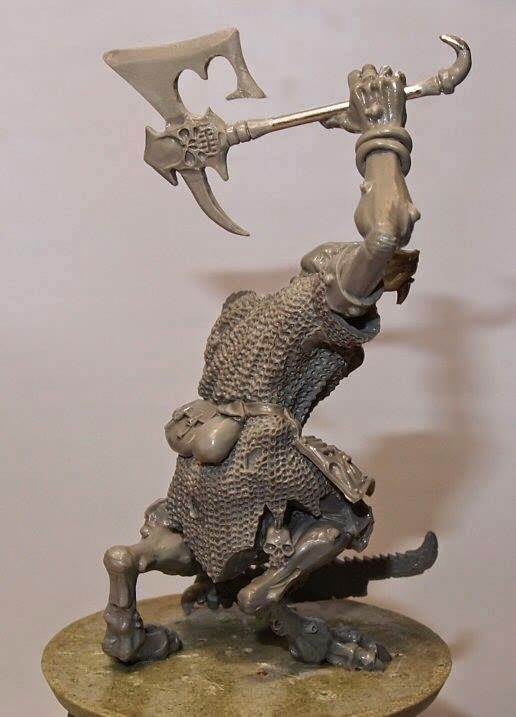 The model is multi-part and can be broken down as such into four pieces. Talking to Mick Leech, owner of Eastern Front Studios, he told me that he plans to do most likely produce a set of different heads and or weapons to further customise this model. So look out for more news there when we get it! 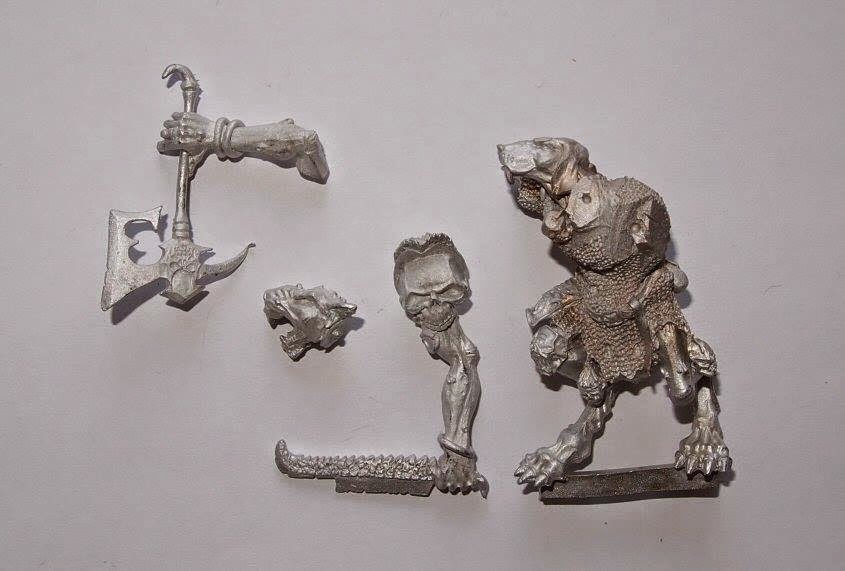 When I posted up the details of the other models, those of Matthias Witherheart and his warband, there was much talk of more close up images so that fans could have a look at the detail. Well, Tim has provided that too, and its here. One thing that is worthy of note though, is that this is only SOME of the miniatures that will be available (hopefully later this year) as many others are in the US and were sculpted by Drew Williams. So watch this space!

Oskar the Writhing, Matthias Witherheart and Gregror Sinblister built and ranked up. Don't worry, you don't have to use round bases! 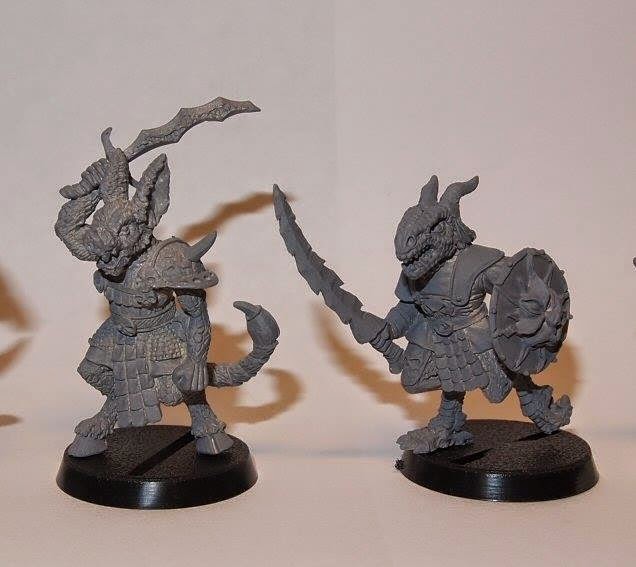 Two of the beastmen that will soon see the like of day. There will be other models in this range too - with an emphasis on .non-goaty' beastmen.

A scale shot showing off the smaller miniatures alongside the snakemen. As with the Son of Slomm, hopefully we will see additional parts for the snakemen to help create additional figures. 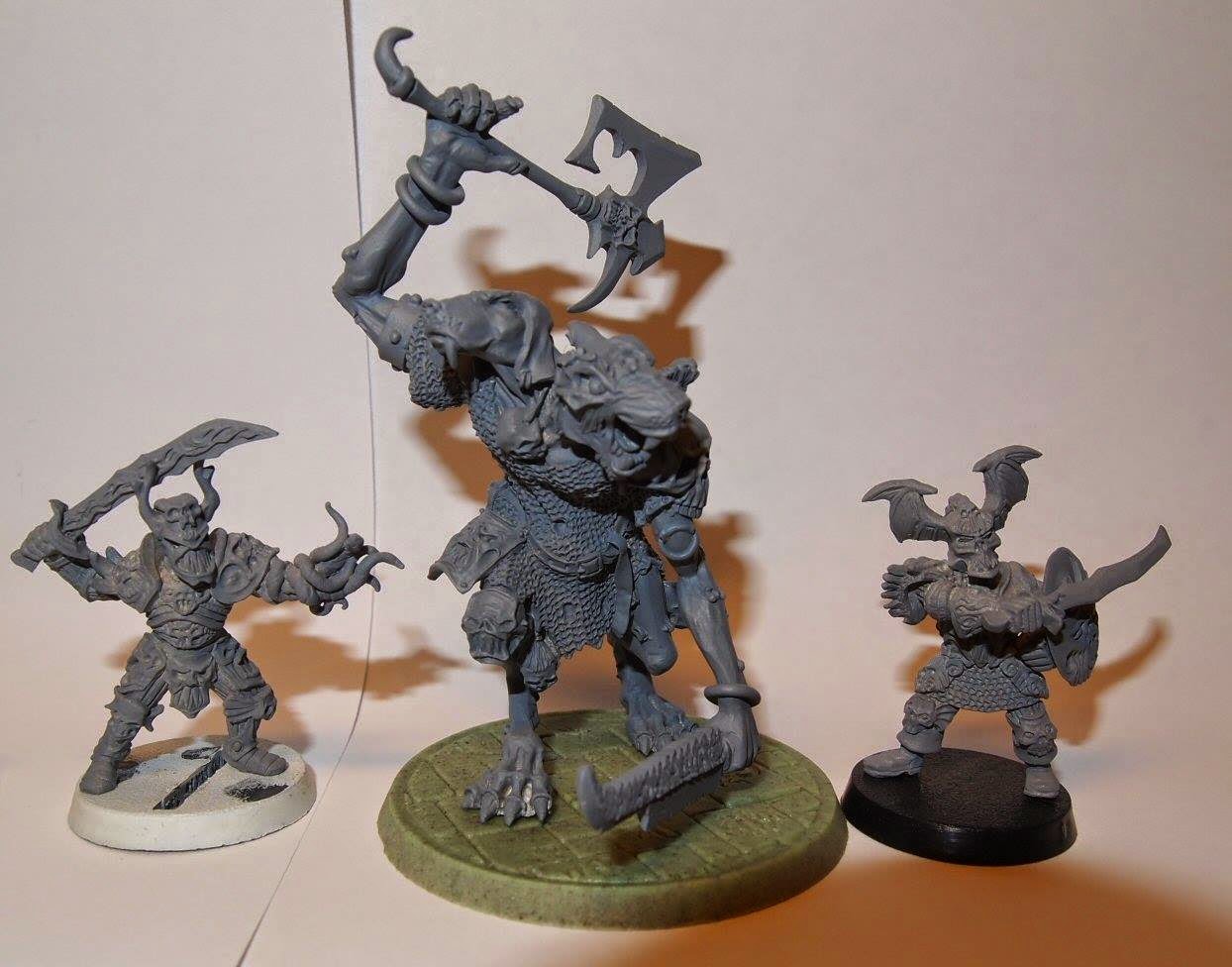 The Son of Slomm figure alongside Oskar and Gregor. He is a good size, but should match the other larger creatures produced in metal during the 1980s. 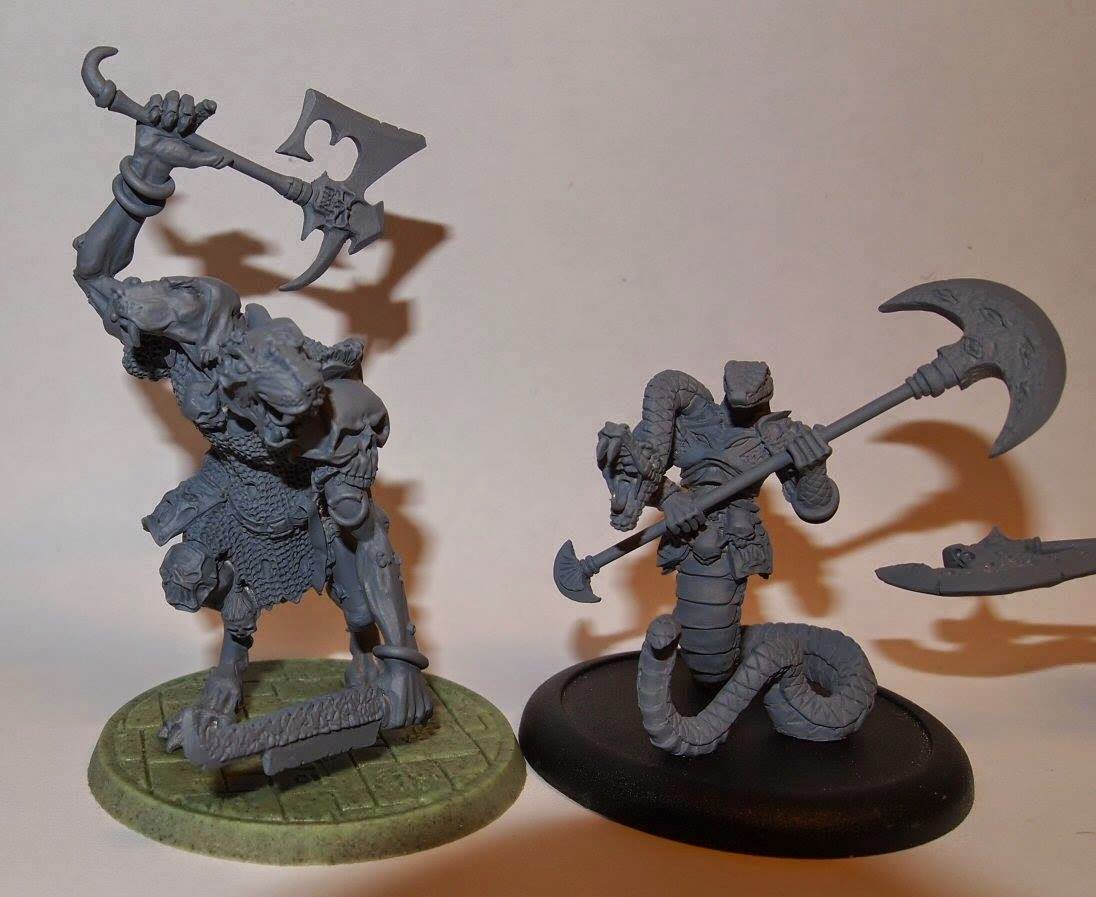 Here we can compare the relative sizes of the snakeman champion and the proposed Son of Slomm model.

And finally, a shot of all of the models put together.