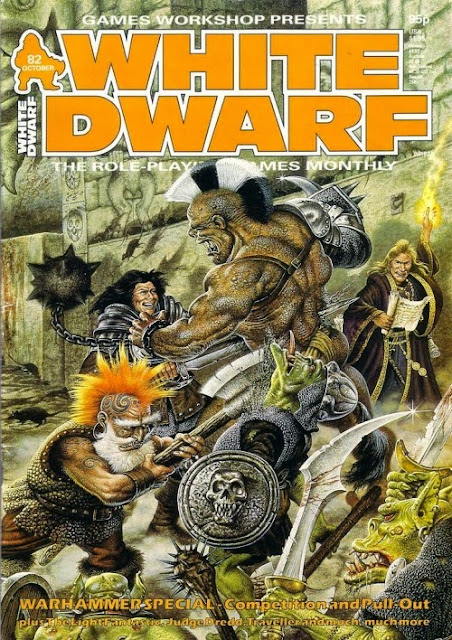 I have written extensive tracts on the release of two other major 1980s GW games in my blogging career. Warhammer Fantasy Battle Third Edition jumps instantly to mind and remains a very popular post with thousands of views to its credit. The second was my analysis of Rogue Trader, which had been published some months earlier, and forms part of another dormant blog of mine. With the slow resurgence of interest in FIRST edition Warhammer Fantasy Roleplay (beyond the hardcore fan base that has always existed in places such as Strike-To-Stun, for example) a number of readers have approached me to ask if I would do something similar with WFRP as I have done with WFB3. Namely, look into the history of the game through its supplements and publications.

To be honest, chronicling the game of Warhammer Fantasy Roleplay in this way has always been the back of my mind. After all, its makes up a huge amount of background material that serves to provide all the fluff you will ever need to generate fantastic Old School style games of Warhammer. There are just so many excellent, zany or simply unique ideas secreted away in the material not to explore.

Let's delve deeper then shall we? Issue 82 of White Dwarf saw the arrival of WFRP on the suspecting world. After all, the game had had a fair few mentions in the past in White Dwarf and the project was very welcome. It was to be the 'British version' of D&D surely? What we got was quite different and the influence of other roleplaying games is there to see, particularly Call of Cthulhu. Plenty has already been written about the origins of the game, and its fairly easy to find with a little Googling, but the purpose of this post is to look in detail at the way GW promoted the product through WD 83. So without any further waffle from yours truly, let's have a look at what the world saw back in 1986. 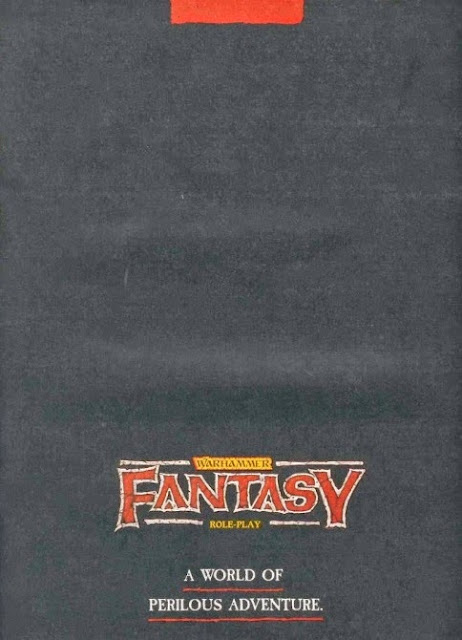 What strikes you first is the quality of the paper, at least in mine, and there is a real feel of the 'pull out special' around the article. Quite why you would want to pull out the article and keep it separate from the magazine is beyond me, but its clear that somewhere someone thought that a pull out would be a good idea. The first page is a surprisingly simple affair by GW standards. No spikes, or grinning ogres of death are to be found here... Just a simple black page with the roleplay titles and its tagline - 'a world of perilous adventure'.

I must admit at this point to really being surprised by the quality of this article when I first laid eyes on it some years ago. There is something, at least to me, special about the presentation. Something significant in the simplicity of the featureless black background and the titles. It looking perilous indeed from the very off! 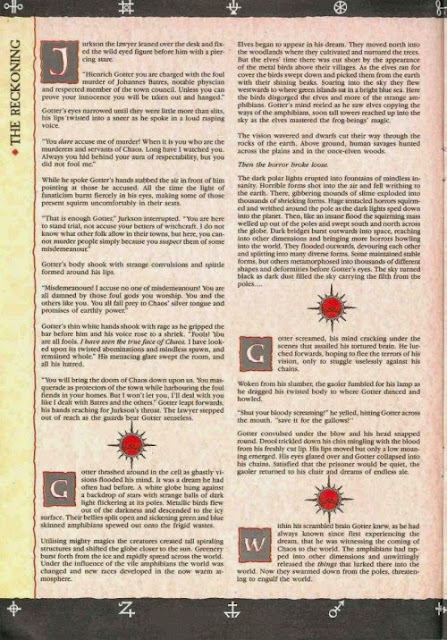 If you turn over you are confronted not by pretty pictures, but a full page of text, interspersed here and there by the then famous (and arguably already iconic) John Blanche Ogre face design. Its a very short story called 'The Reckoning' in which the tone of WFRP is set very much in stone. Dark. Dangerous. Low key and ultimately doomed. Its a part of the Warhammer mythos that many of us old hands miss. When chaos wasn't an omnipresent pantomime villain to be wheeled on for yet another epoch making invasion. It was secret. Unknowable by the characters in the stories our games played out. The majority of the Old World lived in self-indulgent ignorance of the horrors that lurked beneath them and the mind shattering power of chaos. We understood that this was a blessing. Just as we understood that the slow, inevitable decline of humanity would ultimately end with the triumph of chaos. For its very conception, the Warhammer world was doomed to destruction but in a far more subtle way that just the arrival of Nagash and the End of (buy lots of plastic miniatures and big kit monsters) Times. If you wanted large scale invasions of chaos hordes you could do it, by the company line sold a far more intelligent vision.

One of plot and counter plot.

Of brains over brawn.

The first page of 'The Reckoning' does its best to introduce the background to the Warhammer world. Of the arrival of the Slann, of their reworking of the world and the disaster that unleashed chaos upon the unsuspecting early societies of dwarf, elf and man. But the visions are dressed up as the ramblings of a mad man. They are not suggested as fact, but a possibility. Gotter's mind may well be able to tap into the horrible history of the Warhammer world but there was always a possibility, inferred or not, that this was just 'one' possibility of the past. His trial in a small town also helps illustrate the low key approaching to adventuring the WFRP encouraged. This is no national trial, just a run of the mill traitor to the state to be tried and executed as per normal. But as it is often with these things... There is more to the tale... 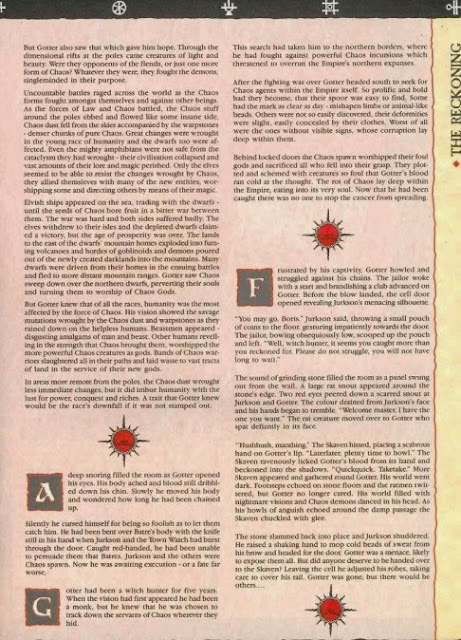 The second page begins with something of great interest to us old school historians of Warhammer. Something absent from the fluff of more familiar times. Let me quote:

"But Gotter also saw that which gave him hope. Through dimensional rifts at the poles came creatures of light and beauty. Were they the opponents of the fiends or just one more form of chaos? Whatever they were, they fought the demons singleminded in their purpose."

The Gods of Law get a mention. These were to be the arch-enemies of Chaos and show just how much of the Warhammer mythos is influenced by Moorcock's writings. And Bryan has mentioned them to me several times and explained how the Studio had plans for background material, a miniature range and such for the Gods of Law. A few ideas filtered through, here and there, but the ideas concerning these powerful beings were never fully realised. Still, its fantastic to find another reference to them hiding in plain sight. Before reading this article, I didn't know that the Gods of Law were responsible for beating back the first chaos incursion.

'The Reckoning' continues and places Gotter as a Witchunter and not a cultist, at least in his view. He has been caught red handed murdering who he claims to have been mutant worshippers of chaos and he must now die for it. Despite his ravings, other intelligences have interests in him and its not long until we learn that the lawyer, Jurkson, is in the thrall of the secretive and cunning ratmen who obviously have plans for the witchunter. At that point we learn that the lawyer is not the pillar of the community he claims to be, but a mutant worshipper of dark powers beyond the ken of common, decent folk.

The perfect set up for adventure! 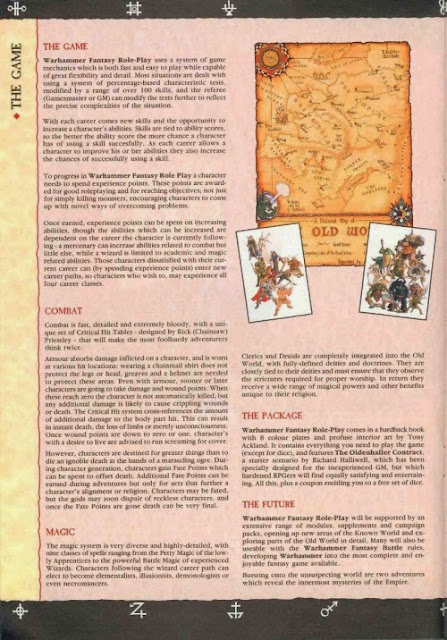 The next page describes the game in a little more detail. Most of that detail will be familiar we those of us even with a passing interest in the game. The vicious combat system is worthy of note as it really was very easy to be seriously injured in the game. This was to be no hack and slash dungeon bash. Fate points helped even out the dangerous nature of combat a little, but even so, getting into a scrap was never something to be taken lightly.

One thing that was unique about the game was the career system. Your character was largely defined by the career you were given and advancement was determined along a fairly restrictive path, dependent on your skills and the whims of the GM. I loved this system and spent many happy hours creating numerous PC characters from tomb robber to artisan, though I seldom got to play them in a decent game.

If you look closely, you will see that there was to be a coupon included with the rulebook that if redeemed at a GW store would entitle you to a free set of dice. Presumably all the multi-faceted ones required to make the most of the game. 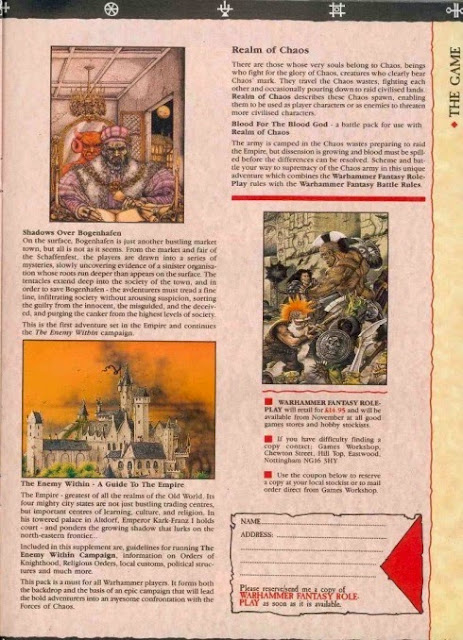 The following page throws up a couple of interesting nuggets that we haven't discussed before here before. The top of the page is subtitled Realm of Chaos and makes a brief mention of the (then) forthcoming book concerning the dark world of chaos. Underneath is mentions a 'battle scenario pack' named Blood for the Blood God, which seems to suggest that GW were planning on releasing a curious roleplay/battle hybrid when you schemed and fought your way to the generalship if a mighty chaos army before attacking the Empire itself.

Sadly, I have never read anything more of this project, though there may well be readers of this blog who may know more, and the prospect of combining the 'best bits' of both rulesets is certainly fascinating. Quite how the 'battle pack' was to be presented may well remain a mystery, though it is probably fair to state that it may have resembled a product such as McDeath or Lichemaster rather than just another source book.

A fascinating 'what if' discovery which just goes to show that even after three years of extensive research, it is still possible to uncover new threads in this old tapestry. 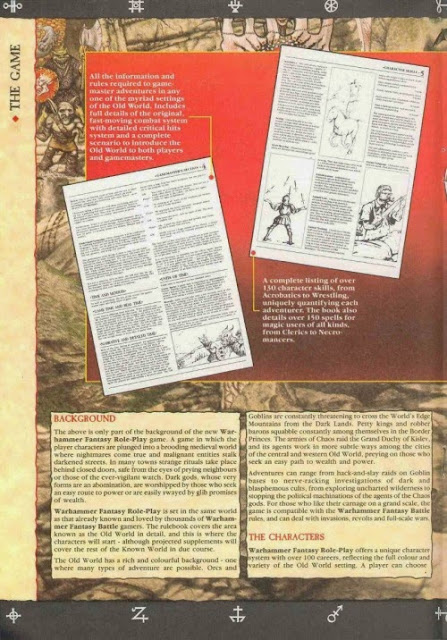 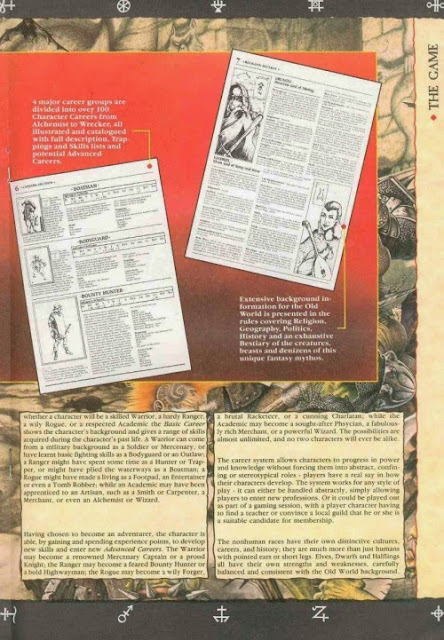 The remaining two pages document the rest of the content in the rulebook. background, advanced options and so forth. One thing that is stressed here and hasn't really been explored in much depth at all, is the fact that WFB3 and WFRP were designed to be compatible. That characters and story lines established through roleplay could be fielded and used to fight larger battlefield actions. It is this kind of gaming that interests me the most and is certainly something I am keen to explore in detail with my Enemy Within project.

So watch this space! 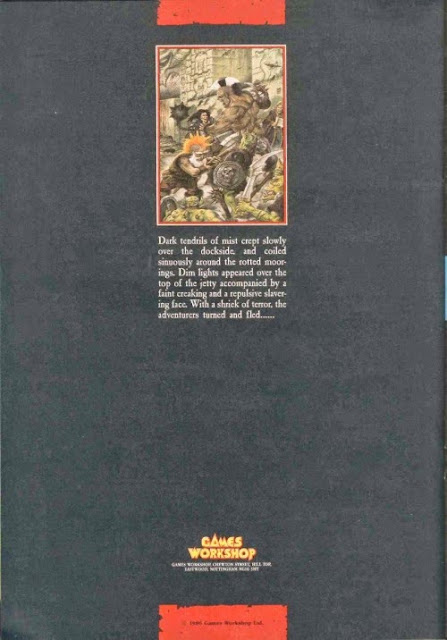