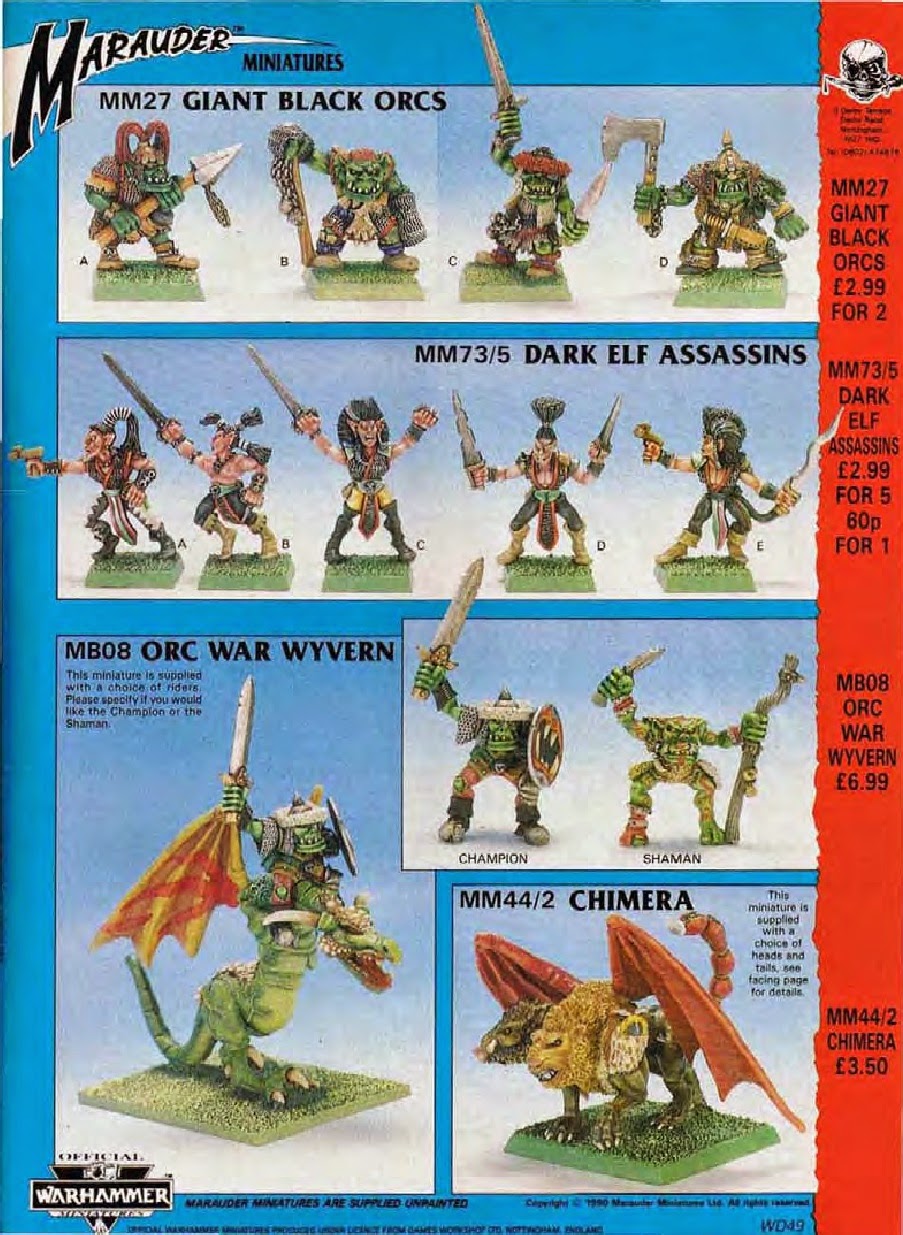 It seems to be a case of long time no see here are Realm of Chaos 80s! Well that would be down to the fact that I have gone and injured myself. Nothing serious, but enough to prevent me from sitting at a desk for more that five minutes without serious discomfort! Hence a lack of postings on this blog, or anywhere else either for that matter. Now before you go imagining acts of daring-do, it was merely a crick of the back after picking up my two year old daughter, but it was a thorough pain!

On top of that, it appears that my email account has been totally spammed while my eye was away and now I need to have a major deleting session of junk. If you are waiting on a response for me, please do email again incase I have missed you while I have been away!

Anyway, back to business... Our little journey through Warhammer Third Edition is coming to its conclusion. We are well into 1990 now and the game as we knew it only had about eighteen months of 'officialdom' left! Things have certainly changed enormously during its lifetime - with the release of more and more plastic kits, a shift in style in regards to sculpting and the incredible success of Rogue Trader/Warhammer 40,000.

But believe it or not, there are still a few items to document and one such release is what I bring forth for your reading pleasure today.

Now these were a popular release back in the day, as I can recall seeing them in nearly everyone else's collection but my own. That fact that some of them (C and D particularly) are nearly always on eBay is perhaps testimony to how many were bought over the years. The first thing you will probably notice if you are comparing these models with the earlier Citadel ones from the 1980s is just how large they are. The are very, very big goblinoid models indeed, even by today's standards. I must admit to having owned model C quite recently, and I think I have lost him somewhere, and for quite a while I was put off painting him up due to the model's enormous size. Since researching this article, I have discovered that I was quite wrong in my original view that these models are just another example of the 'oversized' nature of Warhammer in the 1990s. In fact, these models are supposed to represent that very largest, meanest 'Black Orcs' to be found in the Old World or anywhere else!

Obviously, you are going to be hard pressed to get a varied unit out of just four models, though I have met enthusiasts who just love ranks of identical models all painted up and looking in the same direction. Each to their own and all. My feeling is that these miniatures would make fantastic character models for champions and leaders of your Orc warbands. I particularly like the first two models (A and B) in that regard.

Do they stand up against Kev Adam's best work? They have a certain brutish cunning that gives them a clear sense of character yes, and they are varied enough to avoid the 'indenti-kit' look of more modern orcs and goblins. I would still seek out Kev's work as a preference (but that is just my personal taste) but I would be happy inlcuding these big lads in any goblin horde I was amassing.

These are not my favourite releases from Marauder I must admit. I just cannot get on with the concept behind the models. To me, they really do look like members of a really poor heavy metal band circa 1987. There are shades of Spinal Tap in there too! Perhaps this was deliberate but they really are not as good as Bob Naismith's Dark Elves and Witch Elves that he produced in 1987. This is a real shame, as there is much to commend the Marauder Dark Elf ranges we have already seen, especially the cavalry. I won't be in any hurry to acquire these I can tell you.

Looking back, I have absolutely no memory of these model anywhere. Not even in the pages of White Dwarf or on eBay. If I think 'War Wyvern' I instantly think of the Citadel Miniatures boxed version and nothing else. The fact that a painted version of that model appears in the WFB3 rulebook only further solidifies the image of that model in my mind.

That is probably the problem with this model for many. It lives in the shadow of its grander, more well known and perhaps more iconic big brother. Its not a bad model at all and the additional of a choice about the rider, between Champion and Shaman, is also a boon. In fact, the riders are quite useful if you are after character models or even a little variation on other mounted units.
But the model does lead me to one question! Why don't orcs ever ride horses?

Now this is a good solid model. Considering that it is supposed to represent a mythical/chaotic beast of terrifying power, it goes some distance at actually suggesting that the creature in question is seriously substantial. For starters, the model really is a great size and seems to dwarf the square monster base upon which it resides. The choice of heads is also worthy of note for the range on offer, with the eagle and rat heads being my favourites. To me, this version of the beast is the definitive one put out by GW over the years. A lovely model and one I really do recommend you pick up if you are into collecting or fielding monsters.
﻿ 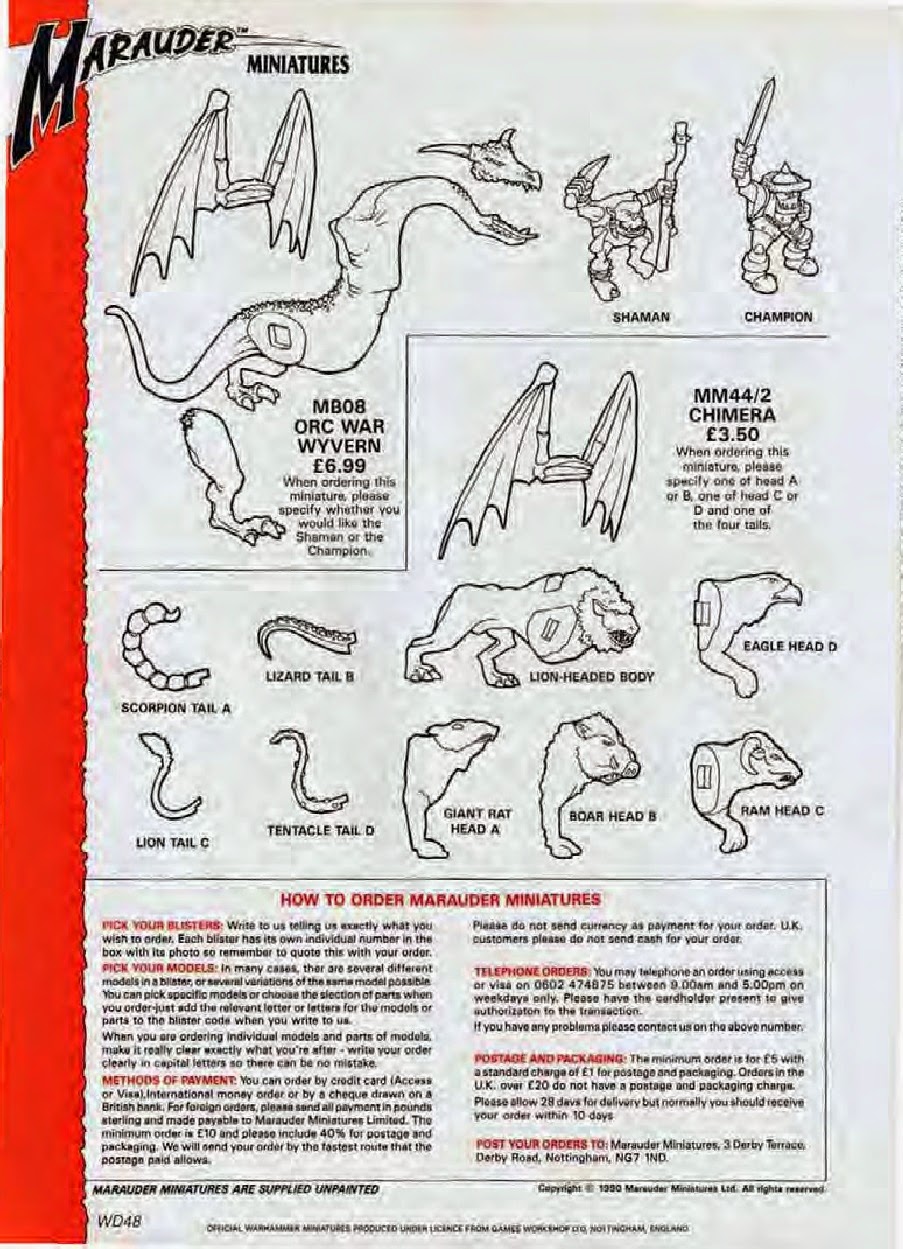