Acceptable in the '80s: Marauder Beastmen 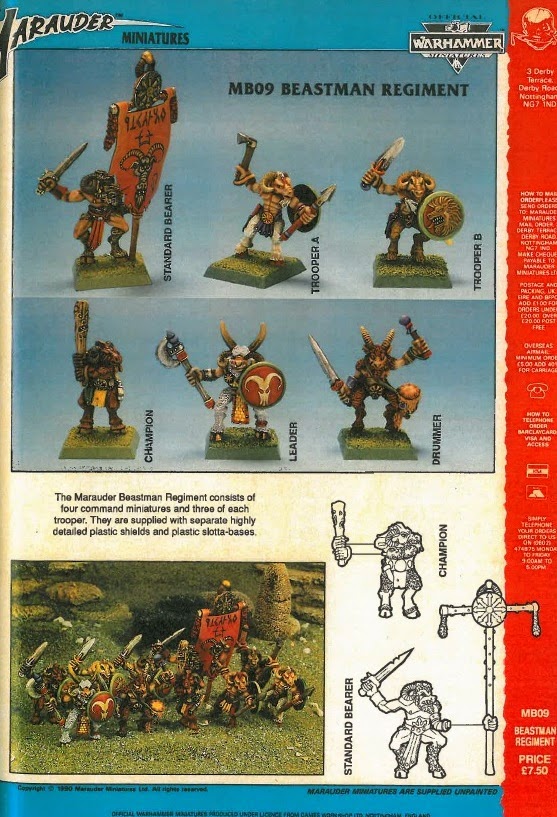 That month, it was chaos beastmen.

Now I have many, many Citadel beastmen in my collection, including thirty-odd painted up examples, all of which are different, Back in the early '90s, it was much the same, though most of my models were but sad daubings with paint and brush - a bit like today according to some! Still, I really enjoyed the range for its malevolence and diversity. Even the old Ral Partha beastmen were worthy of ranking up alongside the Citadel ones I had, in fact, many of them were even more zany and bizarre as the mid to late '80s ranges.

The trouble with the Marauder range was that they just were not as good. They just became the generic muscular goated head men that they would remain, largely, until this day. I expect that producing models to a more coherent design philosophy was much much easier than just letting your sculptors run amok with their wild imaginations, and to be far, some of the examples produced between 1985-7 are really rather naff, but there are more than enough diamonds amongst them to make the risk worthwhile.

Perhaps Marauder lacked the resources or time and these models were all they had time to produce. At the time I was sorely disappointed by this release, and my feelings haven't changed to this day. There are many great models in the Marauder range (Ogres? Chimera?) but these beastmen are not part of that elite group.

Even today, with all the sculpting technology that companies have at their beck-and-call, most of the ranges I have seen still hark back to this generic model. The goat man. I think this is largely due to the influence of modern plastic Warhammer figures, after all the other companies just ape the biggest fish, but I for one would really like to see a more frightening, mutated, varied range arrive one day!

Hopefully, sculpted by Kev Adams at the Foundry! (;
Posted by Orlygg at 23:17

Email ThisBlogThis!Share to TwitterShare to FacebookShare to Pinterest
Labels: Acceptable in the '80s, Beastmen, Marauder Miniatures