I am sure that many of you who read this blog are also readers of the Oldhammer Facebook Group. Unlike a blog or a forum, FB seems a lot more 'instant' and evolving and good posts can quickly disappear into the ether and can be missed by those who don't interact so much. It is because of this that I enjoy stealing other people's postings and sharing them here, as I suspect a far wider audience will be interested in them.

One such posting was by Jon Boyce in a conversation concerning the Space Skaven. Though mentioned in modern 40k fiction, actual official models have never been released. We got Space Undead but never Intergalatic Rats. Still, it didn't stop members of the community talking about them. Jon was kind enough to share these Jes Goodwin concepts published by the Black Library o help illustrate how they may have looked.

I thought that you guys might want to have a look at them too. 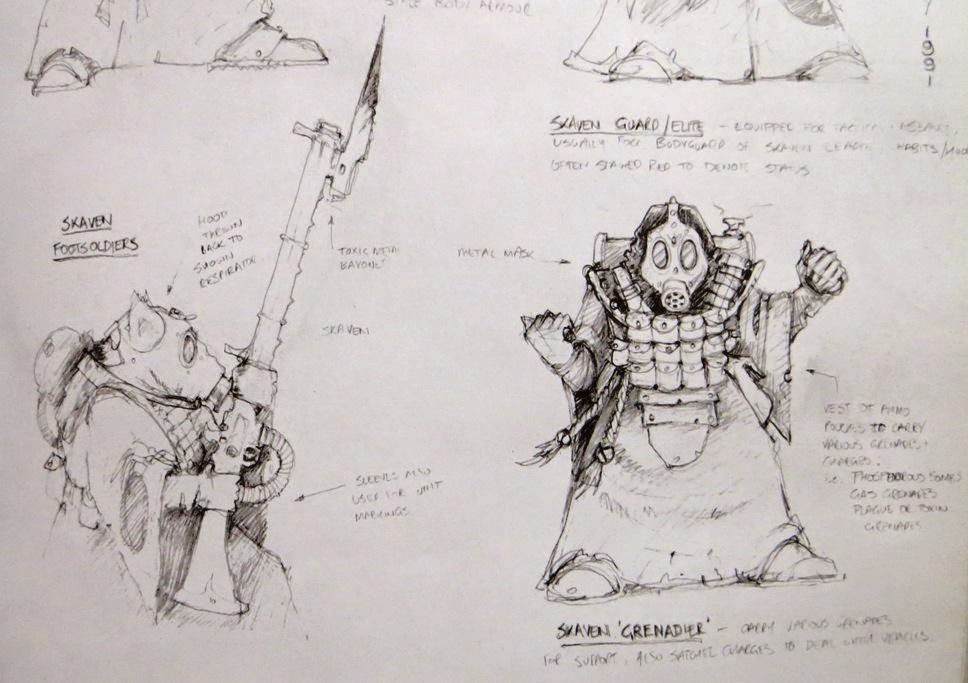 I like the fact that these rats don't lack menace. Too much has been made of their cowardice in recent times, and this has resulted in a race that lacks real threat when you ponder how to use them. They are just another horde army to use a well oiled modern gaming phrase. 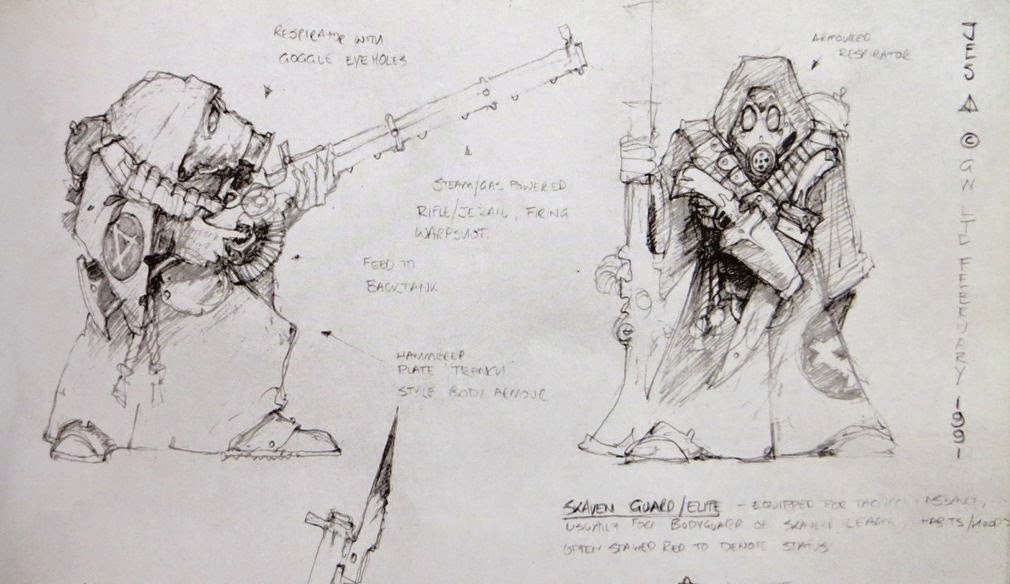 Something in the images made me think of Star Wars. Don't they make you feel the same? Lacking a Space Skaven in my leadpile I pondered if converting and painting one today would be possible. I had a yearning to practice my speed painting technique and setting limits means I get figures completed despite having a wife and two kids in the house with me. So I headed over to the leadpile and pulled out my skaven collection. I selected a 1987 musician model as the addition of the pipes and machine parts gave me a good basis for a sci-fi Rogue Trader model. 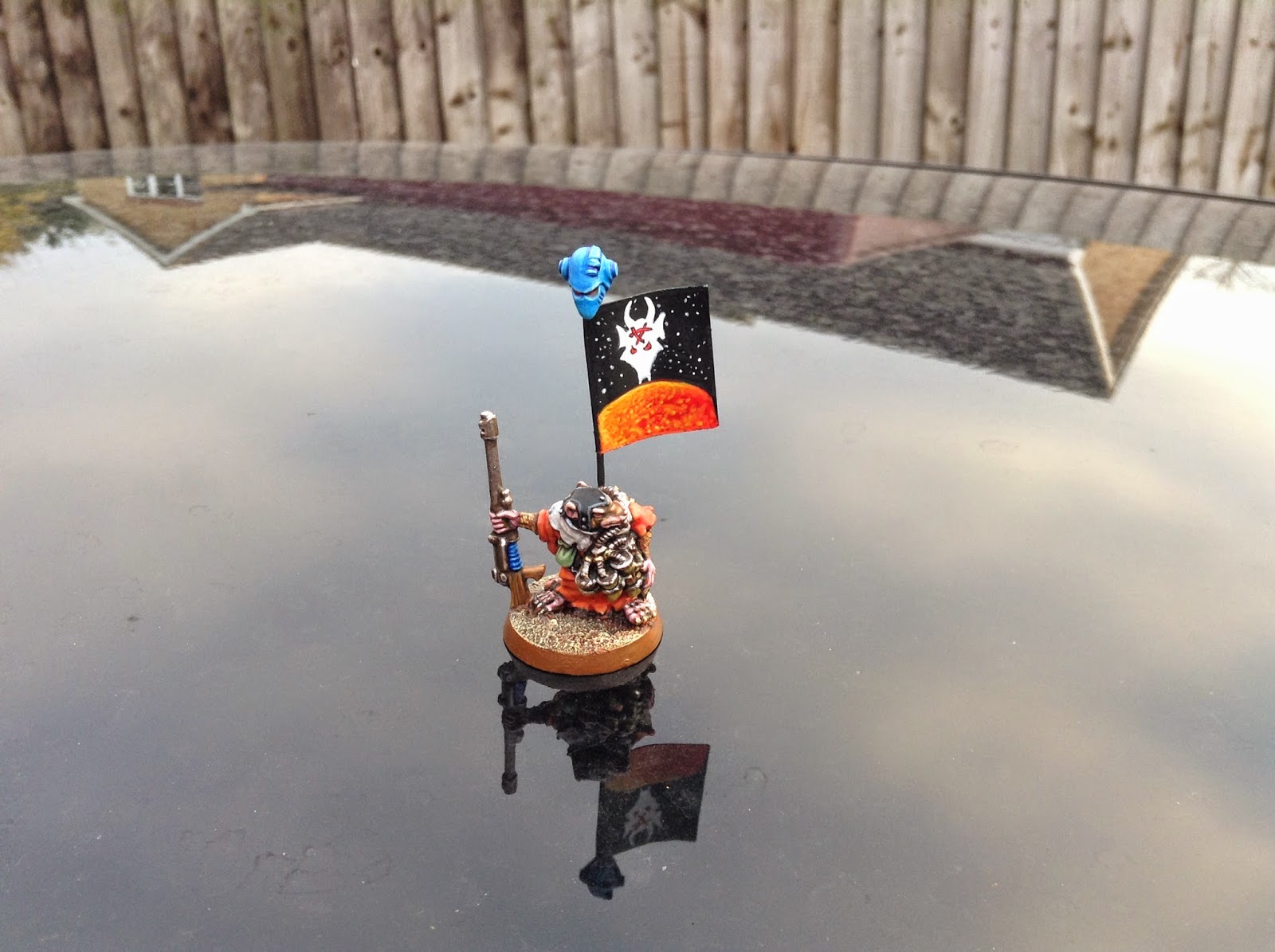 And here is the result! Complete with a Rogue Trader style back banner with a touch of skaven iconography. The conversion was quite simple. I removed what was left of the original dagger (it had been snapped off in antiquity) and replaced it with a cut in half old plastic Imperial guard las-rifle. Green stuff helped me build up the stock and extend the barrel. Several parts of the old RT01 Space Marine sprue helped add further detail and the back banner pole. 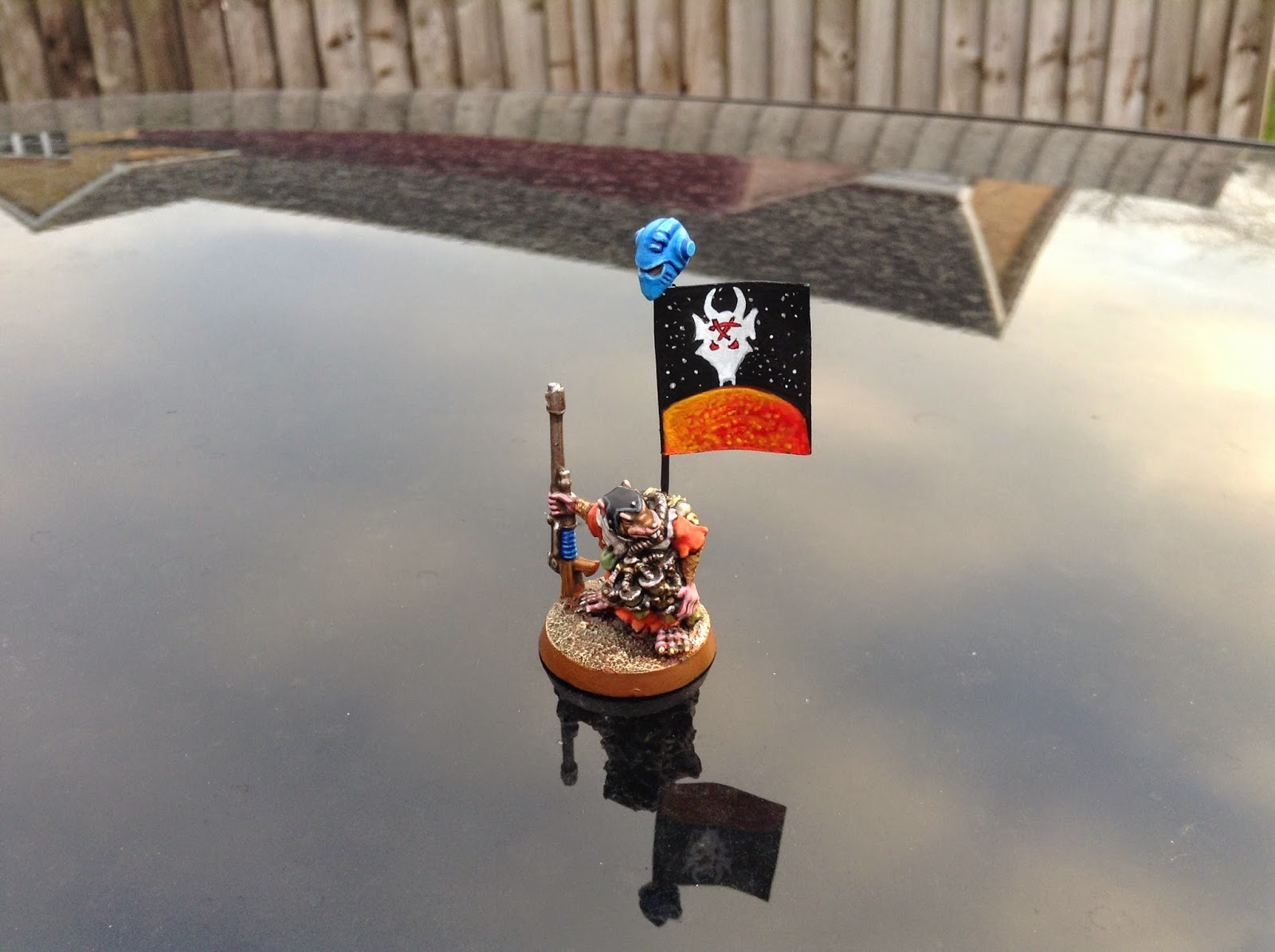 As I mentioned earlier, I used my speed painting method on this model. I limited myself to 5 hours to work on it and that would include the conversion work. The model was based in red, with all the other colours blocked in quite simply. Then, I mixed up a 1:1:2 mix of Brown Ink, Chestnut Ink and water and covered the whole model in my own 'homemade' Army Painter dip.

Once dry, it was a simple case of building up each colour once more with a base, highlight and final highlight. Simples. Once thing that I can say, is that the Star Wars influence didn't quite leave me, and the clothing colour scheme apes that of the uniform Luke Skywalker wore when he fly a Snowspeeder or X-Wing. 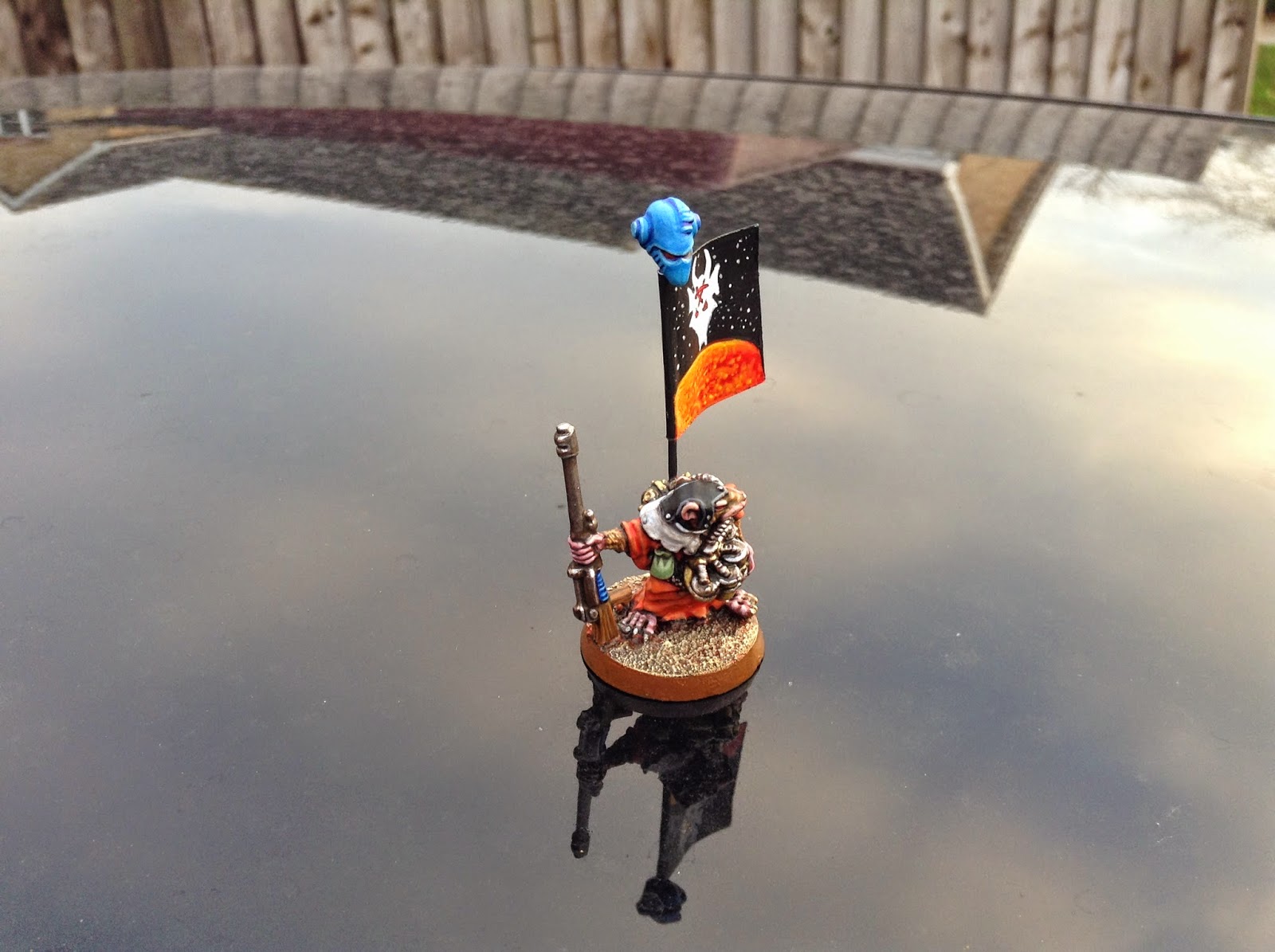 The banner was also very simple to achieve. I used an old envelope as a material and sketched out a plan of the image in biro. I gave the top half a black basecoat and the bottom a red one. Using a very small brush, I created the starfield by dotting lots of little stars. For the first cliuster, I used a mid grey mix and slowly added increasing numbers of white to help give a sense of depth to the stars. The planet was built up in very much the same way using orange and yellow to give the impression of a rough, blasted surface.

The skaven head was freehanded from an image I found on Google. I felt that using red to add the eyes and symbol would help tie in the image with the rest of the banner and the ratman's clothing. 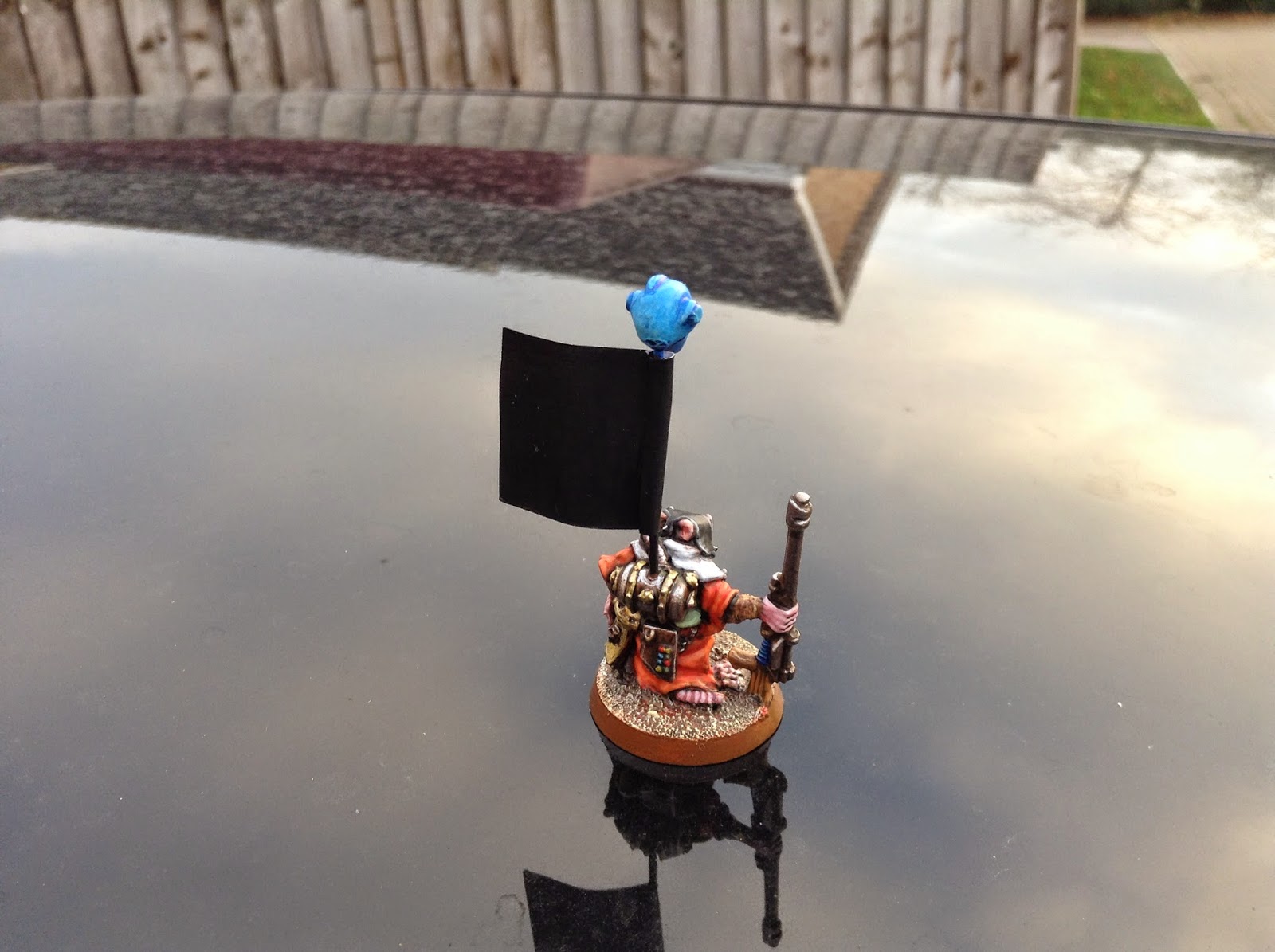 So what do you think? I didn't need the full five hours in the end and I am pretty happy with the results.