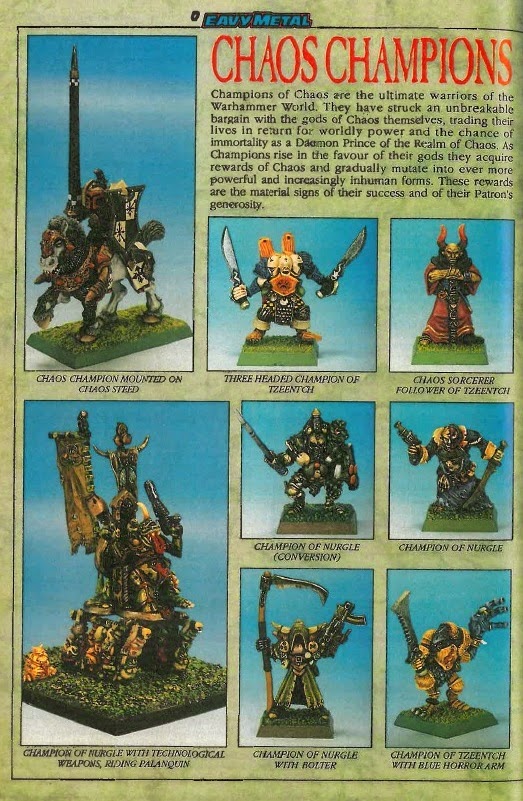 Issue 129 of White Dwarf had a great selection of fantasy models in its 'Eavy Metal pages and made a welcome change to the sheer number of orks that had been turning up. Pleasingly, many of the models exhibited were Realm of Chaos inspired pieces, though the majority of them had been seen before.

The first page (shown above) follows this pattern, with a number of models (the Tzeentch champions and the Bolter Wielding Nurgle chap) having been published before, though there are plenty of new pieces. The Chaos Champion on the Chaos Steed is lovely and contains lots of little quirks worth stealing for your own miniatures. Firstly, this model bears a shield with the chaotic eight pointed star and reminds us that even when painting classic figures you don't have to ally them to any particular god - something that can be rather useful if you want the option of fielding different chaotic forces but don't fancy masses of painting.

And the black and white chequering has shades of Malal too, don't you think?

The Champion of Nurgle on the Palanquin also impresses me. But then again, its an impressive model that still demands a high price. I foolishly sold my example some years ago for not much at all and then struggled to get hold of another one for under £50. The Daemons book that was published five years or so by GW reintroduced the Palanquin to the army and increased interest in them I guess. The one shown here is painted in suitably grotty colours and looks to smell absolutely revolting - though its the solitary contrasting yellow Nurgling that I like the most. If you are only going to own one larger Realm of Chaos piece, then this one is definitely one to consider.

The two central Nurgle Champions on foot are also worth considering, if only for the interesting (and really simple) conversion where the model on the left has had its halberd replaced with a sword. The model to the left, armed with a sword and pistol (rather piratical if you ask me) has a rather unusual colour scheme for Nurgle; blue and yellow, but one that is executed well. I love finding little gems like this as they can inspire you to paint up your Nurgle models in colours you wouldn't normally consider. 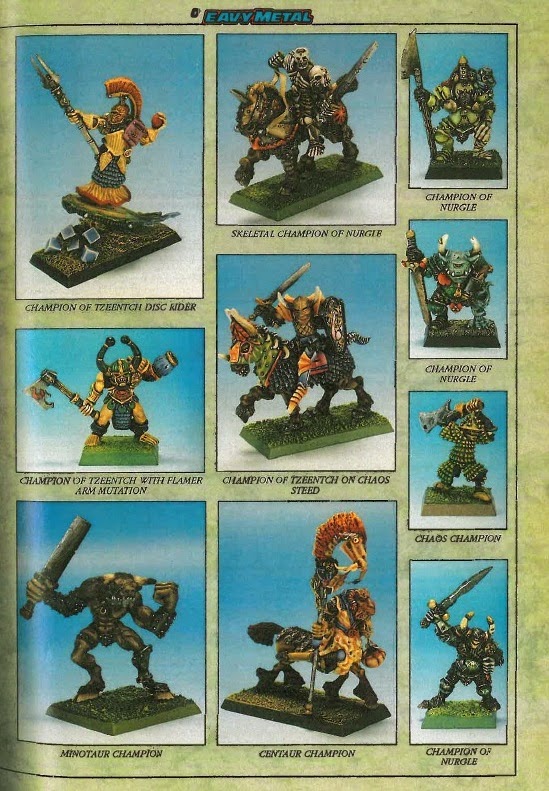 This second page of Chaos Champions is almost entirely made up from reprinted material. But one model on this page is worth discussing, not because of its paint job but because of its perceived price. Have a look at the Chaos Champion second down from the left, with the Face of a Plaguebearer and double handed sword. When I first started toying with collecting Old School Models in about 2008, I set out to get my hands on as many of the Jes Goodwin chaos champions as possible.

I am glad I did, though I still lack one or two, for they can now go for healthy prices being so desirable.

Well, back then you could easily pick up many of them for about 99p. Not so the model we are discussion, and I regularly saw it selling for £15-£20 even then. I got it for £7.77 if I recall correctly, only as that was my highest offer and the winner of the auction declined to pay the £22 or whatever he originally bid. These days, I have not seen the model sell for anything near this amount which provides some of us with a valuable lesson - the price of miniatures goes up as well as down! 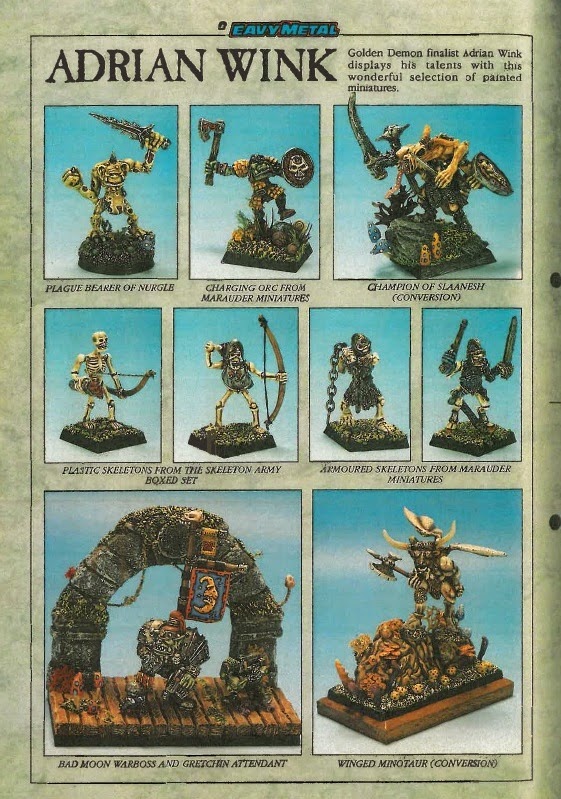 Adrian Wink is a name that some of you may well of heard of. He was a prolific contributor to Golden Demon competitions over a long period and won the Slayer Sword in 1997. Here he shows off some of the earlier work. Back in the day, his plastic skeletons were extremely influential for me because I so wanted to emulate his bow strings on his archers. I can remember raiding my mother's sewing box and using pink thread. Its sufficient to say that the results were not as good as Mr Wink's.

Its nice to see his Marauder Skeletons painted up so well on this page, especially after our recent discussion about them. Many of us agreed that the pirate skeleton shown above is a particular favourite to this day. 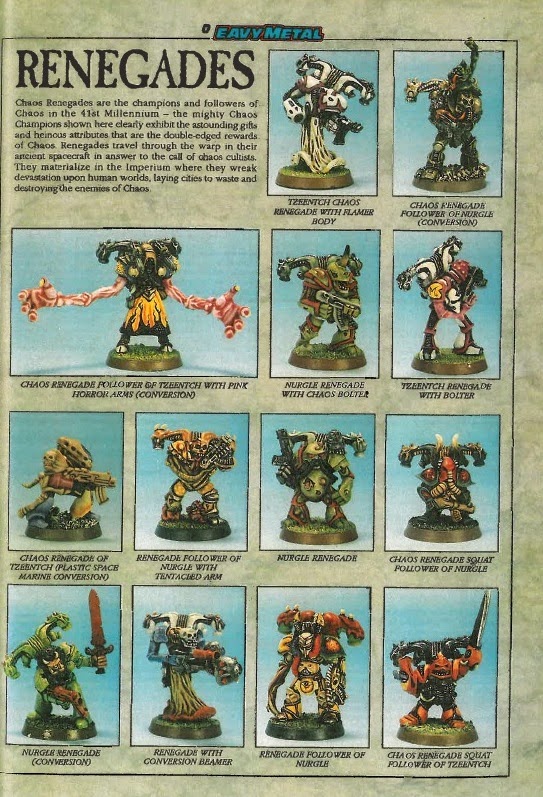 I shall leave you with this final page. Not Warhammer but definitely Realm of Chaos! The wonderfully twisted, chaotic and nightmarish Chaos Renegades. Warped, utterly!