Longhorn stood looking over the ruined parapet. The chill wind ruffled his surcoat, whistling eerily between his ribs.

'Still coming?' the voice belonged to Screamer, one of his companions-at-arms.

'See for yourself.' A black column stretched frorn the horizon to a mile away. like an army of ants one the move.

'Here,' said Screamer, struck by a sudden thought, 'We can talk, right?'

'Yes.' sighed Longhorn. He hated it when Screamer had one of his sudden thoughts.

'And we can see them, right?' Longhorn nodded.

'We're Skeletons. right? No eyes, no eardrums, no vocal cords - but we can see, heat and talk. -Makes you think, doesn't it?'

'I try not to think. There's too damn many contradictions to being Undead. Let's see what Morbius is up to.' Anything was better than Screamer waxing philosophical.

They found their leader in one of the larger chambers, which was fitted out as a workroom. Books, scrolls and spell ingredients littered the floor and several tables, and the Liche was poring over a mouldering parchment.

'Yes, I know they're getting closer, and yes, I know there's lots and lots of them: he said without looking up. 'I'm working on it. So why don't you get to your units and make sure your side of things is ready eh? They should be here in about an hour.'

Precisely an hour later, the mortal army was drawn up before the fortress. Longhorn and Screamer stood in the courtyard with their units, along with Reaper and Hellblade, the other two captains. The gates had begun to quiver under the impact of a ram.

'You know,' remarked Reaper to no-one in particular, 'Being dead already doesn't make this any easier. And where's Morbius? That gate looks like giving any minute.'

'Yes, but how can we see it giving?' asked Screamer.

'Give it a rest, will you? sneered Hellblade, hefting his runesword. 'Just be happy we can and concentrate on keeping your bones together.'

As he spoke, the gates collapsed. Screamer and Hellblade broke into a charge, moving their units to block the gateway while Longhorn's troops covered the flanks and Reaper's held the parapet, pouring arrows and rocks onto the mortal heads beneath.The battle was deadlocked for nearly an hour. The Undead forces were almost halved, but for each Skeleton destroyed four mortals had run screaming away. Then a robed figure appeared from the inner fortress.

'Ah, Morbius.' Yelled Reaper from atop a pile of Elven heads, 'So glad you could drop in. Have a nice kip, did you?'

Ignoring him, the Cache chanted over a pile or shattered bones. and a grey-white mist rose from the ground. When it cleared. the bones fused weirdly into some kind of catapult.Three armoured Skeletons began to work the machine furiously, loading it with skulls. As the skulls hailed down, the mortals broke, trampling their fellows underfoot in their panic.

'I must admit,' remarked Longhorn as they pursued the fleeing mortals, 'That was one of Morbius' better ideas.'

'And here comes another one of his better ideas,' said Screamer, pointing behind with his spear. A two-horse chariot of fused Dragon-bone had driven out of the fortress, and was gaining on them rapidly.

'Here Morbius,' called Screamer as the chariot passed, 'How is it we can see and hear and...'

I have finally completed this little set. I've wanted it for a long while but I have had trouble getting hold of a skullchucker. There are plenty on eBay, don't get me wrong. I just couldn't win one. It was either 5p under, or a pound or two too expensive.

After a rather embarrassing moment (I thought a piece was missing) I have the component pieces soaking contentedly in the dettol ready to begin work. As some of you may be aware, I have already painted up one of the characters of this set as on Axl so have all the others to complete. Even though there is a lot of bone here, I'm looking forward to the challenge of painting these larger kits. Afterall, the largest thing I've painted so far has to be a troll.

I'm going to start with the chariot itself before moving on to the skeletons and finally the skullchucker. The chariot was one of the first retro models I ever bought several years ago and I recall being a little disappointed with it when it first arrived. I'm not sure what it was but I felt a little let down by it. My feelings have totally changed now and I rather looking forward to seeing it painted.

Lets have a look at the kit. 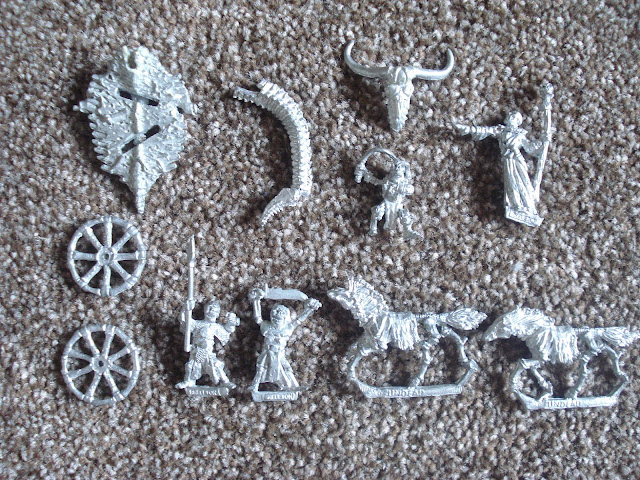 Quick overview of the set. This one was never painted but had been rather brutally stuck together with epoxy glue. It took me quite some time to prise the model apart without causing too much damage to the pieces. I had to use a selection of files and drills to remove the glue; much of which had run into the detail of the miniatures. 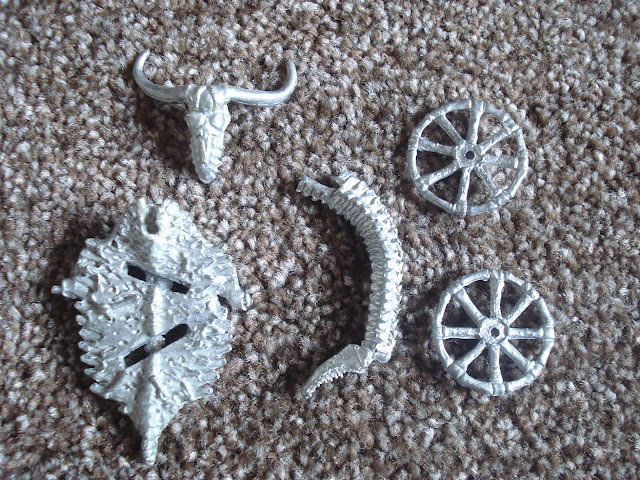 I'm going to start with building up the chariot. I'm going to green stuff the slottabases so that the chariot can house two based models. Pinning is probably the only option when putting this lovely lump of lead together. A small section of the spine has snapped off so with need to be green stuffed too. 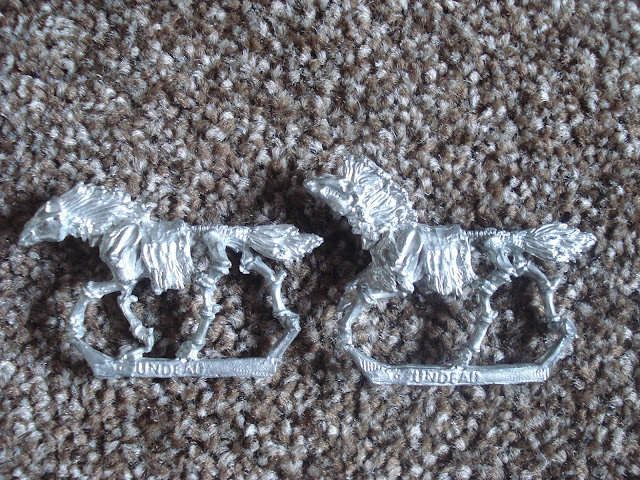 Once the chariot is complete, I intend to move on to the horses, Two characterful undead mounts here and I wouldn't mind getting some more of these for some skeletal riders or heroes. 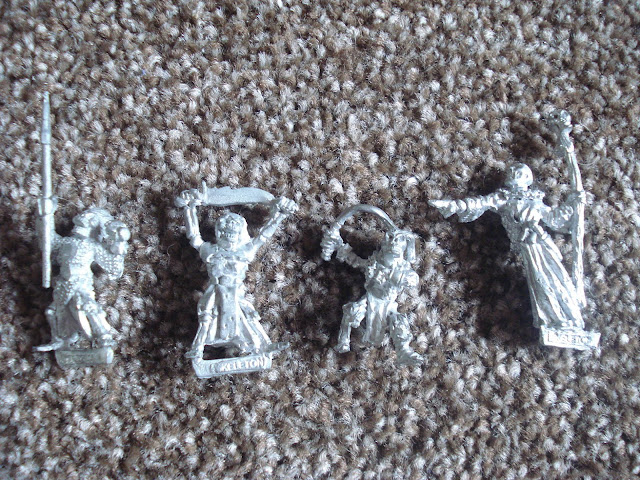 And finally, I'll be working on the heroes. I've just realised that Longhorn is missing so I will have to root him out from the nearly finished pile. These models will represent the different level heroes of the army. I intend Morbius to be the army general and will probably be mounted on the back of the chariot.

Better get these built up, based and undercoated ASAP as Friday is hospital trip day for the birth of the second child. The wife will not be amused if I am spraying black undercoat around with a newborn in the house!

Email ThisBlogThis!Share to TwitterShare to FacebookShare to Pinterest
Labels: Undead