Oldhammer Painting Competition: Da Golden Gobbos: Errr, so how do I complete my entry?


Thank you to all the bloggers out there who have signed up to the first Oldhammer painting competition. If you haven't signed up yet (then, why not?) all the details are available here.. I have had a few queries about how to package together your entry when the final drop of paint is dry and the background fluff completed.

It is going to be easiest to whack all your details onto a WORD document and then email it to orlyggjafnakol@hotmail.com. This will make it far easier for Oldhammerers to manipulate the text and images. In case you are unsure, I have mocked up a fake entry to give you some idea of what to put together. Obviously, this is just an example... not Orlygg's entry!! 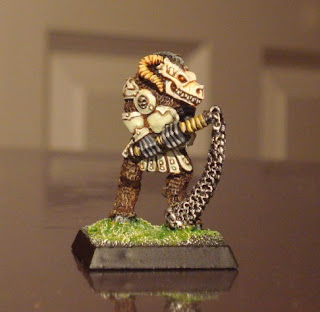 Background
For all the reasons that men turn to chaos, pride is, perhaps, the most foolish. Flayface was one such fool. Raised my his mother, with disputed fatherage, in the small Kislevite village of Popov, the boy, who would one day become a feared champion of chaos, was ill remembered by his peers due to his enormous capacity to boast and lie. If the children were speaking of how far they could swim, he'd have swum further; if the children discussed the effectiveness of slings, his would cast a stone further; if the children spoke of who's father could harvest the most wheat, his would be able to fill eleven wagons, even though he did not know who he was.

As can be imagined, the boy who would become Flayface was an outcast amongst his peers. They'd disperse rather than socialise with him, and so, in time, this boy became a curious loner, spending his days wandering the ancient forests that hugged the rocky highland around the village. On one such day he met a twisted, diseased beggar who had sat for a rest alongside the Koldski Lake. The man wore filthy, stained clothes that hung in tattered strips from his emaciated limbs. The beggar spoke and the boy, unused to attention, spoke back.

No-one is sure what conversation took place. Those who mutter dark names in the night tell a story about how the beggar told the boy of the diseases that blighted his body. How each and every day was a struggle against pain. The boy, of course, had to do better and told a tale about how his body had just recovered from the foulest of agues; cast down by the Lord of Flies himself! The beggar is said to have been impressed. And is said to have smiled paternally as he left the boy by the waterside.

A few days later, the boy complained to his mother of a headache. She did her best to nurse him but within days his head had begun to swell and distort hideously. His skin turned from healthy pink to a sickly, speckled yellow. In time, it began to form the shape of a goat. The mother, perhaps out of love, perhaps out of shame, did her best to hide her child from the world but she could do little to lighten the stench that hung around their home.


The locals gossiped, then accused, until the tensions came to a head and several men stormed the stinking house. Casting the mother aside, they thundered into the boy's chamber to find a hideous thing. The boy's skin had slipped in a necrotic flap down from his skull to hang like a grotesque bib at his neck; his goat like skull was now exposed to the elements. Appalled by the sight that had befallen them, the men stood frozen, giving the boy, now Flayface, time to scramble from the room via a beckoning window and make his way out into the wooded hills. There he finally found his father; Nurgle, Dark God of Pestilence and Decay. In time, he would rise to be one of his most favoured champions.


Well there we go. I only included a single photo as that was all that I had kicking around this morning when I wrote this post. I see no reason to limit the number of photos you send in but, obviously, we cannot look at hundreds of them! I'd imagine a front and back shot is going to be quite useful for voting though. Hopefully, this clears up the few questions that I have had. If you have anymore just email me!