Acceptable in the '80s: Iron Claw Miniatures, Yay or Nay?

I am sure that you recognise these beastmen. The classic metal Realm of Chaos releases from the late '80s that, in my opinion anyway, have never been bettered. These models really do typify what I imagine a beastmen to look like; not just a mere goat head humanoid but a hideous, mutated mix of different animal bits. I also like the fact that the range, released over several years and incorporating earlier models, really do reflect the Chaos God they are supposed to follow while others are appropriate for all and any.

Now the reason I am talking about these beastmen can be clearly seen on the first row. The nurglesque beastmen with a distinct style. I own a few of the them and have even painted some of them up for my Nurgle Warband. It wasn't until fairly recently that I realised that the sculptor of these models was Bob Olley and that he had a range all of his own 'back in the day'. They were called 'Iron Claw' and like 'Marauder' were produced by Citadel and sold through Games Workshop.

His sculpting has a distinct style that is hard (for me anyway) to put into words. Gnarled, fungoid and swarthy are words that spring to mind but they don't quite do his work justice. I find that the models don't paint easily. Lots of creases and folds to challenge the painter. Its like each of his miniatures has a strange, uneven texture that, though lifelike, is hard to paint. But that's just me. To understand the range further let me quote Solegends directly;

"Iron Claw were a range of miniatures designed by Bob Olley. First announced in White Dwarf 91, the first releases were the IC201 Skeleton Guard in White Dwarf 93. They were manufactured and distributed by Citadel and appeared during 1987-8. When Bob and Citadel parted company many of these pieces were assimilated into the main Citadel lists. The Goblins and Black Orcs, for instance, formed the bulk of those pictured in the 1990 Fantasy catalog."

I have collected below a range of scans from various sources of some of the miniatures he produced during his time at Citadel. I must confess, I don't actually own a single one of these models and my opinion on them is mixed. Some of his work I find really impressive while other stuff doesn't raise the passion to collect or even paint them. 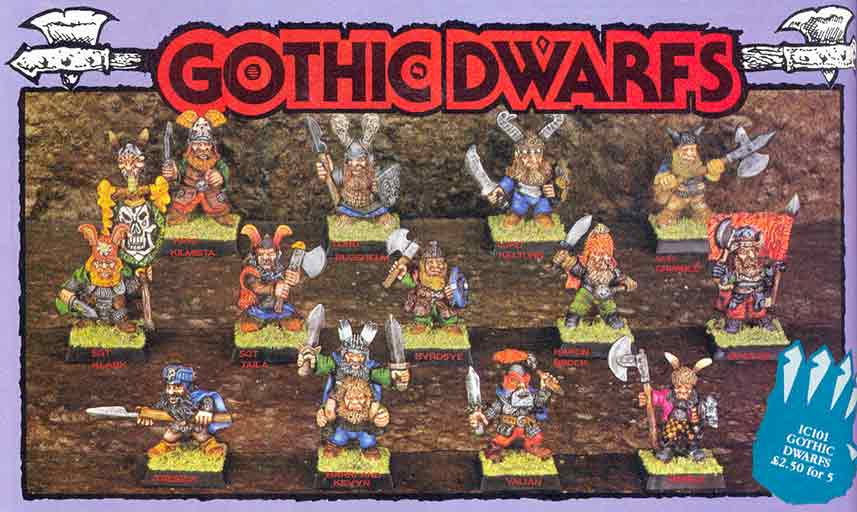 Let's begin with these Dwarfs. Or should I say Gothic Dwarfs. I am not quite sure what a Gothic Dwarf may be but these models are certainly original. The first thing that strikes me about them are the helmets. Quite unique are they not; wings, horns and turbans that are rather distinctive. There is a strong nordic sense about many of these sculpts as well as a Russian feel, especially the last model (bottom right) though the miniature on the opposite left looks positively arabian. Looking at them, they make me think of a Victorian performance of 'Ride of the Valkyries' performed by midgets. Perhaps that is what they mean by Gothic?

I certainly would be interested in collecting this little set. There's 13 in the series (including two standards) so a little 12 piece unit would be possible. The piggy back pair would make a fantastic unit champion or leader and you could invent some suitably amusing rules for them. One thing I don't like about the set are the shields. I really dislike moulded on shields. They look too thick for my taste and tend to lack a flat, paintable surface to do skull or ugly face designs on.

As for painting quality of the models on show I'd say they had been handled nicely. Lots of bright, 80s blues and oranges but lots of depth too, most likely created through subtle use of inks. I'm going to steal the brown and yellow cheque design from the Kislevite looking chap on the bottom right for a future model. 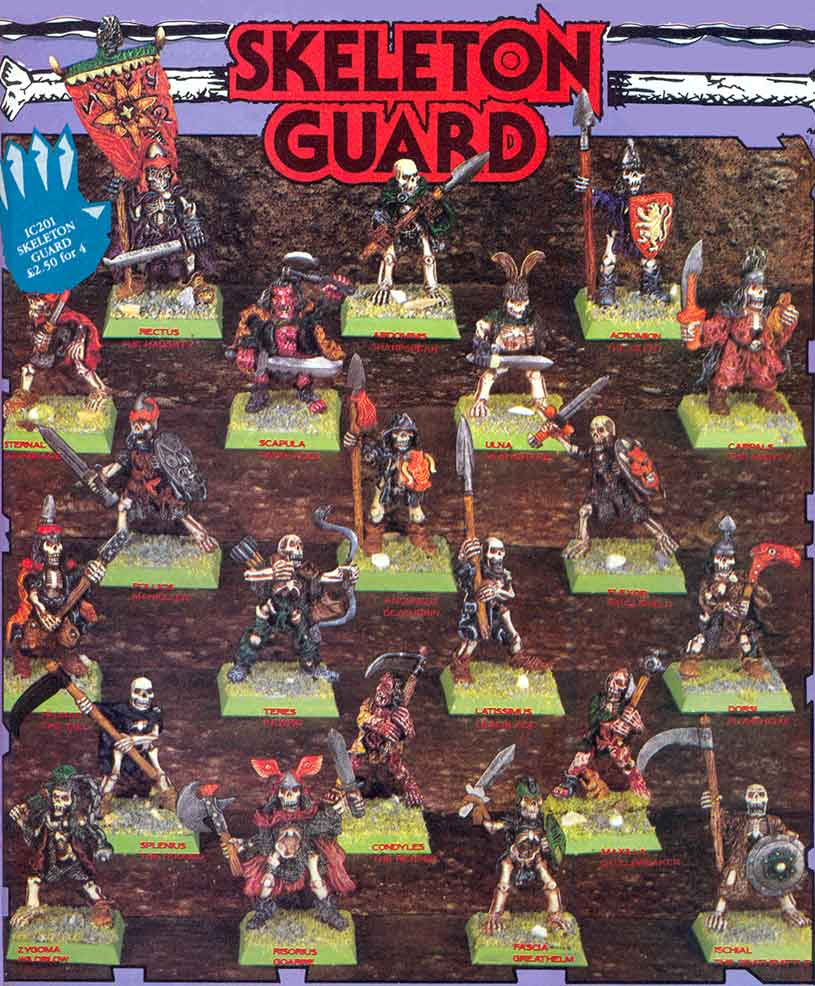 The skeleton guard. As the quote from Solegends tells us, these were the first Iron Claw releases. Again, the miniatures have that gnarled, swarthy look (as gnarly and swarthy as a skeleton can be I suppose) that is typical of the Iron Claw range. However, I feel these skeletons to be rather more 'daemonic' looking than the standard Citadel sculpts. There is a fair about of dark comedy about some of the early Citadel skellies, as those of you will know if you own the lovely skelly who is holding up his own skull, and the later plastic and metal examples are rather, souless, but that, perhaps, was the point. These sculpts look really evil. Strange helmets also prevail here. More wings and horns that are distinctly Olley.

I am not too keen on this set, so I'd probably pass. I much prefer the standard Citadel metals and will always favour the good old plastic Skeleton Horde figure or the Nightmare Legion for my choice of skeletal troops. I probably take a couple of the Grim Reapers and definitely the standard bearer, but that's it.

The painting quality is okay here. But there are too many bright reds for my taste. I prefer my undead to clothed in drab browns, blacks and greys. The bone is certainly interesting but there are so many ways to paint them. The evil crimson eyes are a nice touch too, certainly worth emulating. 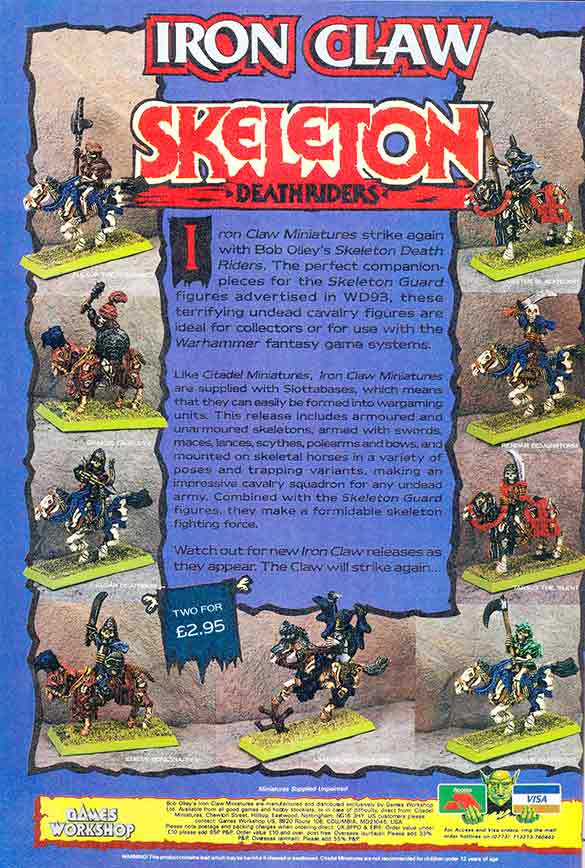 I really don't like this set. Why? The feel like they have been knocked up really quickly. But that may just be the image so I'd have to have a closer look to make a final decision. I must say though, the mounts look more interesting and varied than the Citadel ones, so I'll have to reserve judgement there. Apart from a few of the Grim Reapers, these models have a bit of a mongol vibe going on. Certainly original in style then! 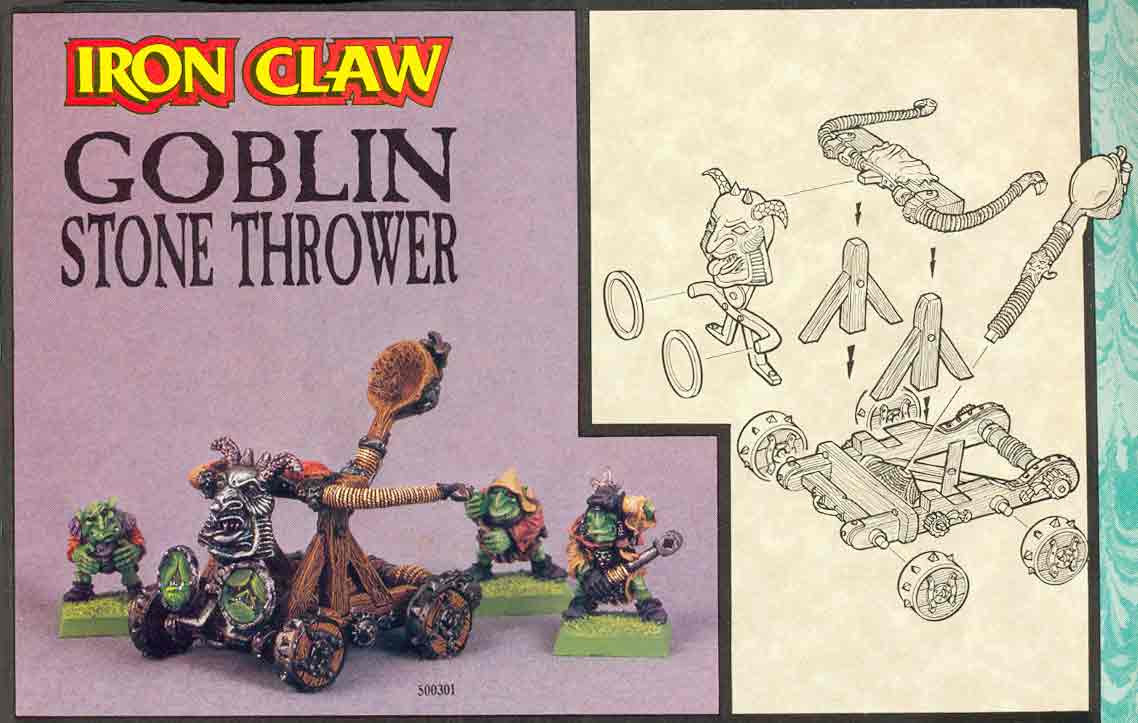 This is my favourite of the releases discussed in this post. I love the swarthy feel to Olley's goblins. They look suitably menacing too, though they still have that darkly comical feel. This is a kit I'd certainly like to see in my Orc and Goblin force, even though it looks like its been largely put together from pieces of the Goblobber and the Man Mangler. The totem on the front, though only painted silver in this example, would look fantastic worked up in a nice goblinoid green and the small shields are just begging for some 'orrible John Blanche style faces to be painted on them, don't you think?

So then. Do you have any Iron Claw miniatures in your collection? Are you a fan of Olley's work? I must confess to having absolutely NONE of these models in my collection - they are not high on my want list, but some of them certainly would be snapped up if I saw an example at the right price.

Email ThisBlogThis!Share to TwitterShare to FacebookShare to Pinterest
Labels: Acceptable in the '80s, Bob Olley, Goblins, Machinaries of Destruction, Undead