I been 're-organizing' my collection this week, hence the lack of posts. Being a father to a new baby means you have little time to paint (just ask Gaj) and even less time to blog. It seems my wife and I are getting somewhere with the feeding and sleeping but its still hard going, especially with all the hot weather. One of the first things that I did was sort out my white dwarf collection. I finally put them into chronological order (rather than just a massive pile) and discovered I had a few issues missing. Off to eBay and this was soon put right.

So I have issues 90 - 152, though a couple of them have pages missing (140 and 144 respectively) so in the long term I shall be searching for these issues to replace them. Its fascinating to flick through them a see how the magazine (and the miniatures) changed during this period. White Dwarf turned from a Role- Playing magazine into a GW only hobby rag over the period of about 18 months. What is astonishing is the sheer amount of quality games that were designed, produced and released from 1987-1990: Warhammer 3rd, Rogue Trader, Space Hulk, Blood Bowl, Dark Future, Space Marine, Adeptus Mechanicus, The Enemy Within, Chaos Marauders, Heroquest, Advanced Heroquest, Space Crusade, Advanced Space Crusade, Mighty Empires... Basically GW's legacy on gaming, a legacy that has been plundered and rehashed ad nauseum ever since. In those 3 years, 36 issues in fact, practically everything happens. Not to mention reams and reams of additional rules and what not.

One of the things I found when flicking through was this beauty. The original rules for the Skeleton War Machines from issue 95. You can find a scan below. As many of you will be aware I have been slugging away on this model for some weeks now and have almost (I've been saying almost for a while now) completed it - just the Charioteer to go, though Morbius and Screamer need a paint job too. These are individual characters that I shall use to lead other units. Morbius will be the army general and Screamer will lead my skeleton archers. 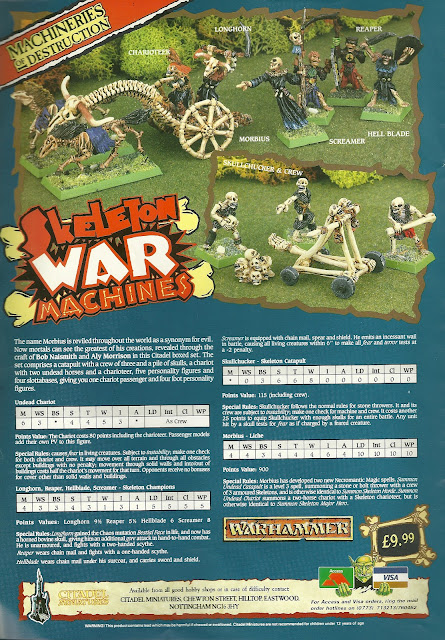 THE PROS AND CONS OF EBAY

Something that a lot of bloggers have been discussing recently is the nature of the beast that is eBay; namely, can you still get a bargain on it? True, prices have risen, but then more and more gamers and painters have been turned off Warhammer and 40k by the antics of GW and have returned to more pleasant times. Sure GW is big now, but its is no way as influencial as it was in the 1980s. According to Bryan Ansell, a million metal miniatures were being sold every month by 1986. That's 12 million miniatures for the year 1986 alone. This number only increased as the 80s grew older. Think about it, even on the terms of 1986, that is 60 million miniatures sold from 1986-1990. 60 million! Most of them are still out there considering they were largely made of metal at this time. So its only fair to say there is plenty of stock out there for everyone, hiding in attics, lurking in lofts and creeping around in the back of dusty old cupboards.

I am still amazed that you can pick up mint copies of Dark Future, BloodBowl, Heroquest etc on eBay for around £50. I am also amazed by the ridiculous prices that some people set, particularly on Buy it Nows. I have found that it is possible to filter these out a stick just to auctions, though the prices set by stores such as Troll Trader and Warhammer Trader can be very reasonable. By filtering out the junk, I have made two bargain star buys this week that I wanted to share with you, that prove you can still get decent items online.

I have been after this model for some time as I owned one as a child. I've seen plenty of Buy it Nows, some as high as £50, and frequently lost at auction with prices exceeding £25. I managed to pick it up at just £7. The lead had been thoroughly brutalised with what looked like glittery nail polish and was instantly placed in the dettol vat. I have just checked it and am please to report that the varnish is beginning to peel away nicely. 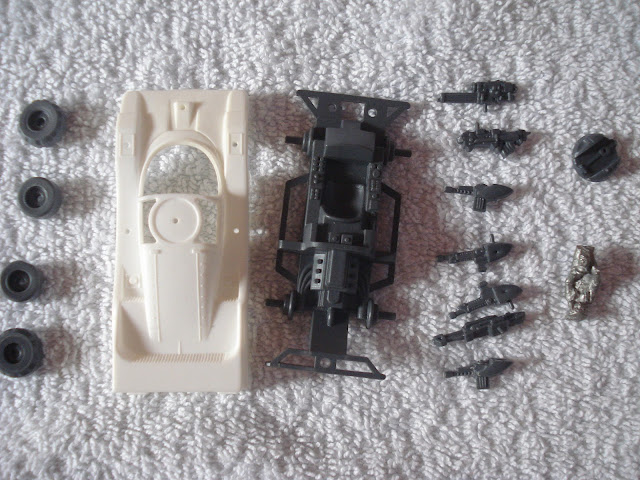 Secondly, also for £7 I managed to pick up a complete Dark Future vehicle kit. Mint!. It even had a full set of weapons and the driver. Almost unheard of really. You may be wondering why I am buying up a kit such as this... Well, time will tell.

While on the subject of eBay. Have you got a little collection of jam jars like I have? 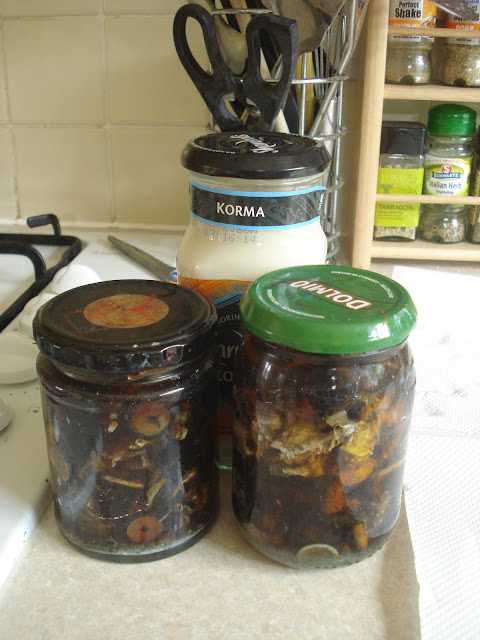 These have been sitting in the kitchen on a high shelf well out of the sight of my wife. I must confess to merely  dropping in lead as it is ripped from the still living postage and packing. If its painted or covered in glue in goes in. I then forget about it. For months and months. So I decided to bite the bullet and empty one out. 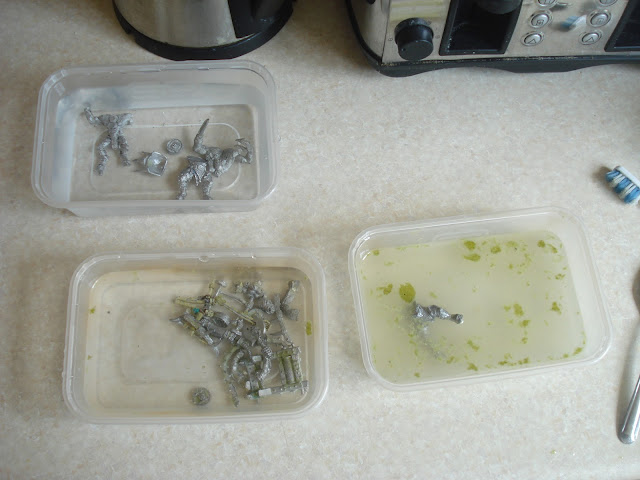 Now, I am not sure how others do it. I use three old takeaway dishes. The first is for general washing off of the gunk, the second and general clean with a brush while the final one is for removing those small, stubborn pieces of residual paint with a cocktail stick. 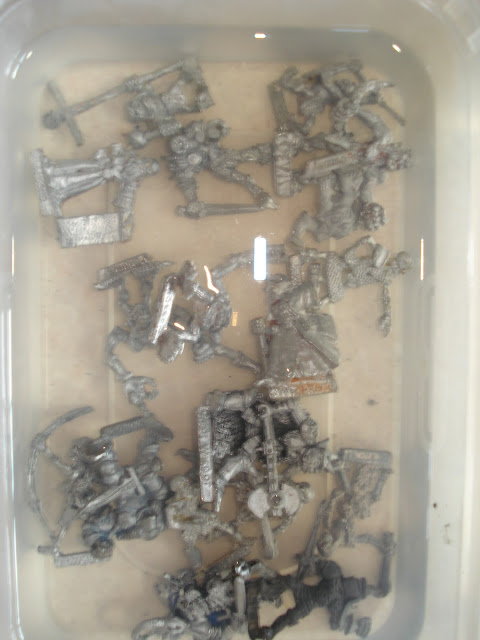 A shot of my ill gotten gains.  Undead, chaos, human wizards, daemons - they are all here... 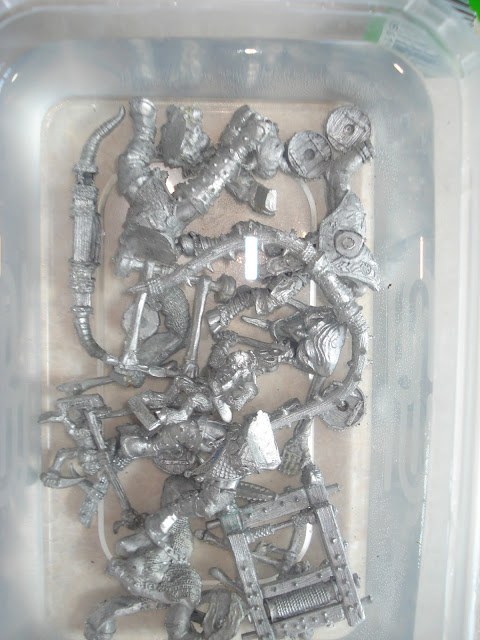 Beastmen, orcs, keepers and a man mangler. Its amazing what you can fit into one jam jar isn't it?