I really enjoyed the retro review I did regarding the work of Bob Olley and I discovered that there are plenty of Olley fans out there but some agreement that some of his work is a little, what's the word, passable. So I have decided to continue. We are sticking with the same issue as before, White Dwarf 94, and I have reproduced for you all the releases of that month. 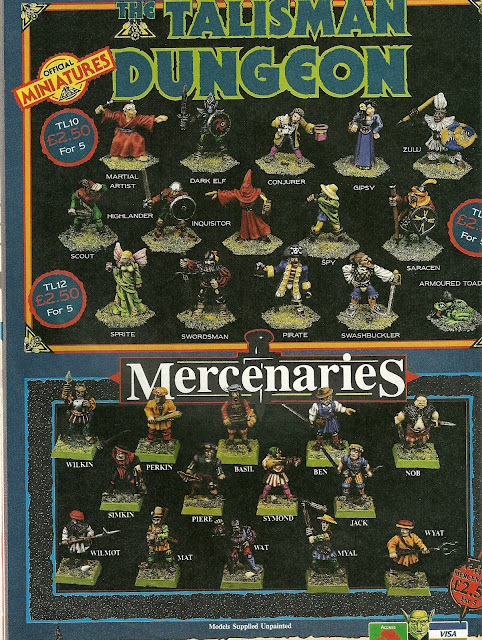 First off, a double set; Talisman Dungeon and Mercenaries. Let's start with the models released as part of the Talisman range. I have recently (by which I mean this week) seen a fairly complete set of these models going for about £100 so they are clearly still a popular series of sculpts. Now, those of you who don't know, Talisman was (and still is) a board game in which the players taken of a character type in a quest to gain possession of the Crown of Command. Though the game can be played without metal miniatures, such was Citadel's nature in the 1980s, a set of models was released for the game and the many subsequent expansions. I came late to the party, purchasing the third edition of the game when it was released in 2008, and played many games of it with my wife and it remains to this day the only GW game that she will play.

The miniatures in the range are varied and well sculpted, I own only one of this series, the red robed inquisitor in the centre of the page, and are full of character. They would make fantastic character models for third edition games as well as interesting painting challenges in their own right. My favourite model? Most definitely the Sprite. I love the tones of green and flesh on this piece and it is certainly a scheme I would like to copy some time in the future.

The second set are entitled Mercenaries and are again nice a varied. With fourteen models in this set they would make a very characterful unit for third edition. I have a particular fondness for NOB who seems to be positively waddling forwards ready to engage his next opponent. Sadly, I have never seen any of these on eBay nor do I own any of them. I suspect many of these sculpts were added to the later FIGHTERS range but I have no evidence of this at present. There is little fantasy on show here, which suggests the hands of the prolific sculpting force known as the brother's Perry. The obvious nod to medieval dress would have made these models useful for historical forces as well as fantasy ones. 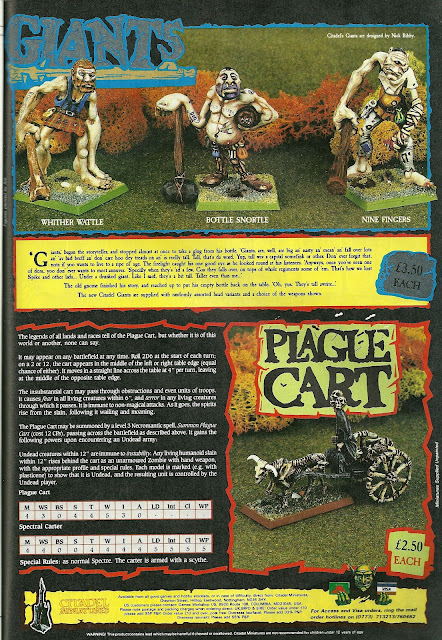 Ahh! Nick Bibby's giants! I am a big fan of Nine Fingers and have said so publically before. I think that the model has a wonderful dynamism and its body is perfectly positioned. I cannot say the same for the other sculpts in this range. Wither Wattle, who bears a strong resemblance to a young Bob Naismith, is okay and obviously shares much in common with the Nine Fingers sculpt in terms of positioning but I just cannot stand the model of Bottle Snottle! Its the really, really crap hand, massively out of proportion to the rest of his body, that puts me right off. He looks like he has spent a long, long time in prison with a giant stack of 'magazines of gentleman's interest' and little else to pass his time. The fact that his weapon, a rather fetching stone headed club,  seems rather incongruous to the rest of the model cements the fact that this model is always going to be passed over in my collection.

Plague Cart and its rules

The Plague Cart on the other hand is an absolute must for my Undead army. I have slapped a bid down on this beauty more than once only to be pipped at the post. The wheels may be familiar to keen eyed enthusiasts, for they are the very same ones that appear on the skeleton chariot that I have been working on recently. The model has some interesting rules too.

The cart can be used in any game. You roll a 2D6 at the start of each turn; on a 2 or a 12 the chart appears on the middle edge of the left or right table edge (an equal chance of either). It then moves in a straight line across the battlefield at 4" per turn, leaving through the middle of the opposite table edge. The insubstantial cart may pass through obstructions and even units of troops. It causes fear in all living creatures with 6", and terror in any living creatures through which it passes. It is immune to non-magical attacks. As it goes, the spirits rise from the slain, following it wailing and moaning.

The Plague Cart may be summoned by a level 3 Necromantic spell, summon plague cart (cost 12mps) passing across the battlefield. It gains the following powers when it encounters an undead army.

1) Undead creatures with 12" are immune to instability.
2) Any living humanoid slain with 12" rises as a zombie behind the cart with hand weapon and appropriate rules. Each model is marked (perhaps with plasticine) and is under the control of the undead player.

Special Rules: As a normal spectre, the creature is armed with a scythe. 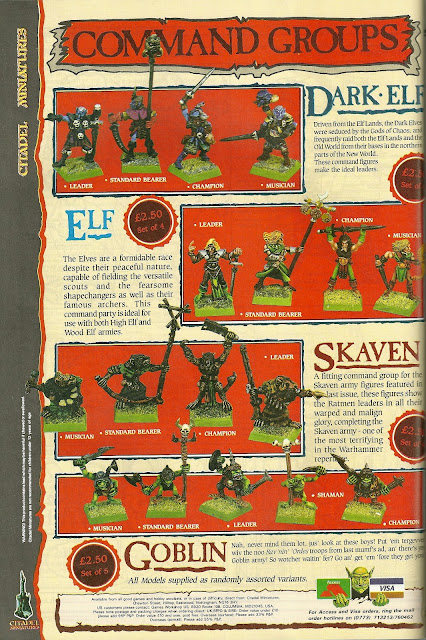 These command groups are ideal for pairing with the rank and file troops of the plastic Warhammer Regiments, a relationship that I have always felt was a deliberate one on the hands of Citadel. I love all the sculpts in this range and own one of two of them. I have the goblin shamen, the elf standard bearer, the skaven champion and elf the musician. I would certainly be interested in obtaining the rest of these models, especially the goblin leader which I feel to be one of the finest gobliniod models Citadel has ever produced. The dark elves are suitably militarilistic and the skaven leader is an absolute classic sculpt of Jes Goodwin that was, until relatively recently, still available to buy from GW.

The paint schemes or these models is also highly inspirational for me. The distinct blue and purple of the dark elves, the bright greens and golden yellows of the elves, the dirty, heavily shaded browns of the skaven and the sickly greens of the goblins are THE colours I like to use in my paint pallete. This is because this page of White Dwarf is one of the best examples of the colour scheme and painting style of three of the most important third edition armies. 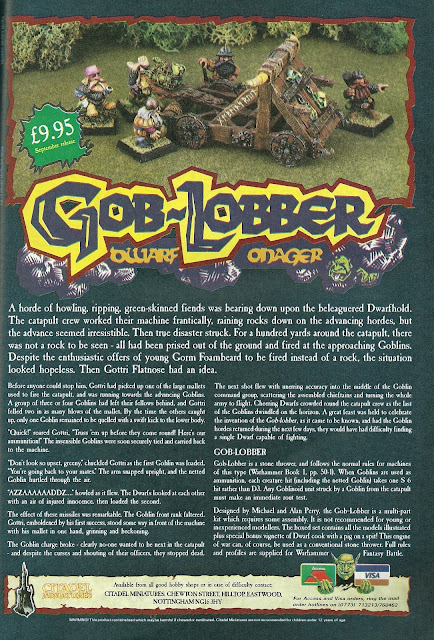 Classic '80s Warhammer through and through! The second of the Perry engineered sculpts on today's post. The addition of some gruesome goblin heads turns this from being just another catapult into a wonderfully zany weapon that just begs to be fielded in all dwarf armies. Some of the crew members were recycled for use in other later dwarf war machines, though others were only available with this set - such as the dwarf cook with a pig on a spit (sadly not pictured here) and the pipe smoking commander.

I am lucky enough to have won this particular war machine recently. If I remember correctly for the rather cheap sum of £7. Sadly, I didn't win the crew that went with the machine but they tend to crop up quite often so its only a matter of time until I have my hands on them too. However, I am missing the wheels! I was wondering if any Oldhammerers out there could do me the kindness of lending me a wheel from this model so I can take a cast of it and create some greenstuff copies. If you could, please contact me and I'll be eternally grateful!