Today, we are delving into the pages of White Dwarf 95 in a little more detail. We have already discussed the Warhammer Launch Article and the Sabbat Flexi Disc in past posts, so we can move on to the miniatures with no further distraction. This issue had an especially high number of colour adverts for Citadel figures, perhaps due to the coverage about the new addition, and included some real classics. What I find particularly interesting about these ads is that they often came with a little background, or a story and often some new rules. You could order the model, or pick it up in a game store, and just play with its straight away, with no need for further purchase. 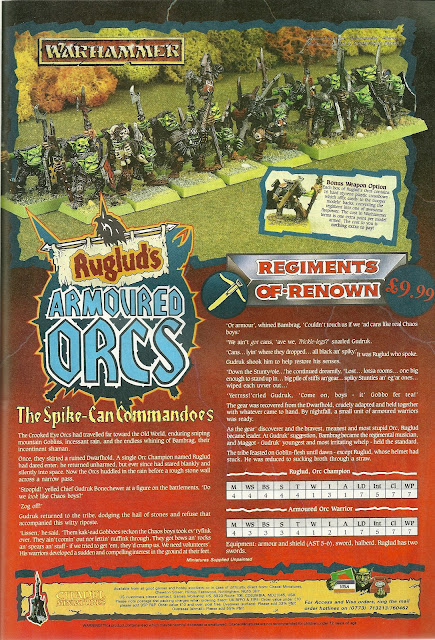 I am sure that you agree with me when I say that this unit are an absolute must for any orc and goblin collector or retro gamer. I had been after these boys for quite a long time before I managed to pick them up ( along with a few other bits and bobs) at the Bring and Buy sale at Salute this year for £14. Sure, they were hideously beaten with a range of peculiar paints but nothing that a bit of dettol wouldn't fix. There were no crossbows though, sadly.

So what of the models themselves. You have a set of four character models and a random series of troop models. The troop models all have subtle changes; a head, a weapon, a body etc and these help to create a sense of variation amongst the unit. All these troopers are armed with a halberd/spear and have a stud for a shield. As you can see from the photo, the shields should be big and brightly adorned with Arcane Armorials.

The character models are also nice. The musician (armed with a human bone drum of some sort) is well sculpted and characterful, as are Ruglud and his champion. Special mention should be made of the goblin standard bearer. I love this particular model. He's small, he's sneaky and his got a bizarre suit of armour as a standard. The reason for their heavy armour is nicely explained in the background too. 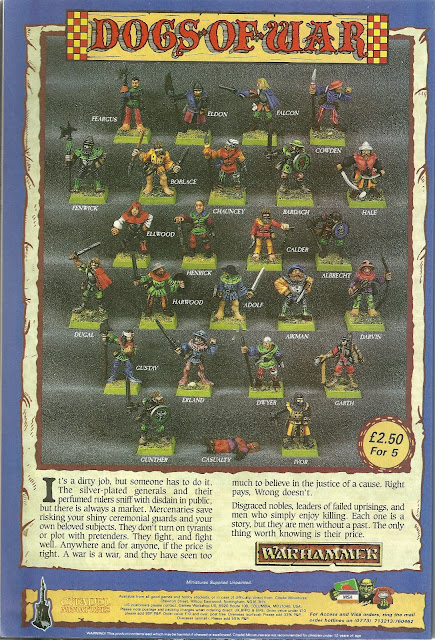 There are some quite well known and some not quite so well known models in this set. Observant collectors will recognise the casualty from Dave Andrews diorama I posted some weeks ago and Adolf from the Advanced Heroquest diorama. As with many of the models produced at this time that Dogs of War are varied and packed full of character. There is a nice range of weapons on offer too, from standards like halberds and swords, to pistols and bows.

The painting is suitably bright as you'd expect from 1987, with a smattering of shields decorated with Arcane Armorials. Overall, a lovely group of miniatures that I'd love to own and, eventually, paint up. The range of poses makes many of these models suitable for heroes and leaders for units. I'll have to keep my eyes open for more 'standard' humans in the future. 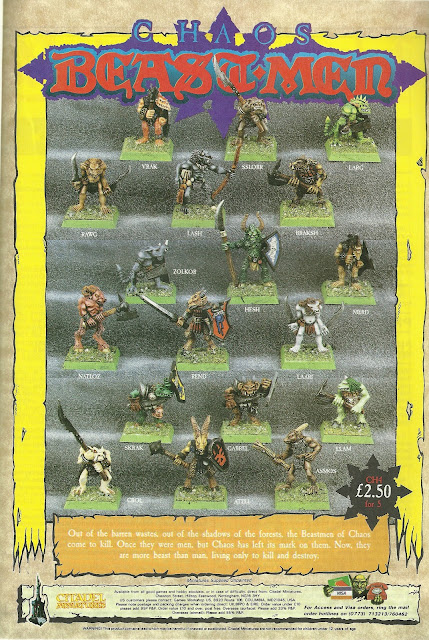 Ahhh! Beastmen, when they were truly beasts and not just goat headed bodybuilders. I have quite a few of these in my collection, in fact the majority, with only a few alluding me. What makes this early release of beastmen so special is that many of them are based on creatures subsequently dropped from the sculpting process but appropriate to the mutations available in Realm of Chaos; dog heads, crocodiles, birds and lizards all appear here. Of course, there are some real classics, especially Hesh, who is my favourite beastman sculpt of all time.

Nice varied use of colour too. Lots of ideas for colour schemes here. One thing that really turns me off Warhammer in its current form is the uniformity of chaos - they all look the same! To me, the whole point of chaos is to be mutated and different from the beastman you're standing next too. Well, this set gives you that and plenty more. Another absolute must for the collector, especially those interested in collecting or gaming with Realm of Chaos. 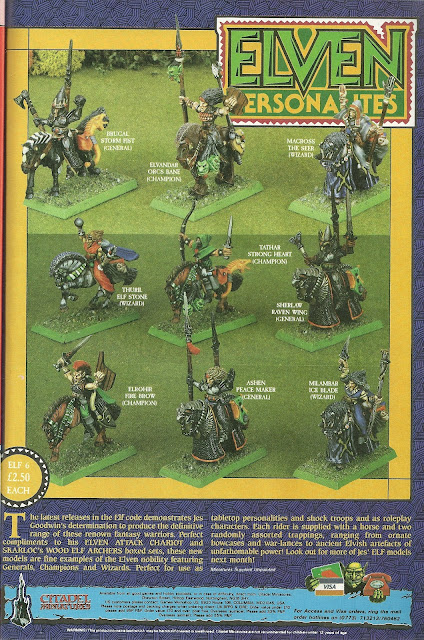 These nine mounted models show you just how far GW have moved from the original concept of the elves. Here, the models have shades of Celtic, Native American and Eastern Mysticism running through them and I feel this makes the models appear more exotic and less human. These days, elves are just posh looking armoured blokes with pointy ears. There is still that '80s punk vibe going on with some of the hairdos and colour choices (I for one love the rainbow mohican) and these models are far better painted that those we have seen before, I can sense that hand of one Mike McVey here.

There is a nice mix of wizard, champion and general models here, armed with a nice range of weaponry. Do I have a favourite here? Definitely Ashen Peace Maker because he looks very military looking and would do sterling work leading my wood elves one day!

Better get on eBay then! 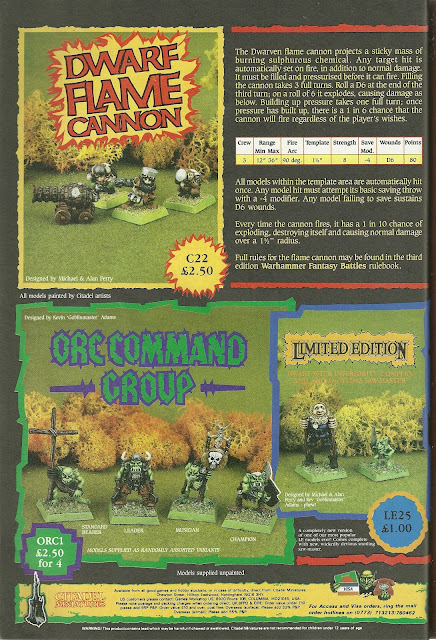 At last! A series of models about which I can say 'I have them!' The dwarf flame cannon was one of the first retro models I picked up a few years ago when I started to feel dis-satisfied by the current ranges. The dwarfs have slipped so far from the original form (which I consider to BE a fantasy dwarf) that the short fellows had disinterested me for years. I know its a word I keep repeating, but its the character of this set that makes it so endearing. The dwarf lighting the cannon hiding his face, the two crewmen crouching down holding their eyes... Lovely, lovely humour that actually tells a little story. Seeing these nicely painted up makes me itch to dig out this little set and give it a good paint job. Additionally, full rules are given as part of the add, meaning you could pick up the blister and get the unit on the table with no further trouble.

Next we have the iconic orc command figures by Kev Adams. As regular readers of this blog will know, I have painted up this set to lead my plastic Warhammer Regiments orcs. There are quite a few variants of this initial set and they are all worth having and are, frankly, a job to paint.

Finally, the dwarf on stilts. Another example of that wacky sense of humour! I've seen this model many time on eBay (and I believe that there are more than one version of it) but have yet to see the wonderfully nasty goblin sawmaster. I'd pay a few bit for him if he came up! 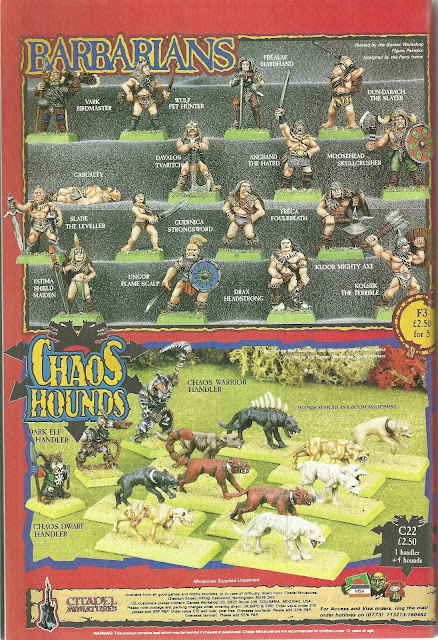 I've always found this set a little 'meh'. There are some really good sculpts here, especially the females but some of the more muscular males leave me unimpressed. I'd pick up one or two of them just to paint up but I'd be unlikely to take my collection much further.

The Chaos Hounds on the other hand are classics and I own many of them. Thankfully, I recently managed to get my hands on the chaos warrior packmaster to help lead them as these models are scarce. The hounds do turn up quite regularly and are worth buying up. Being chaotic, you can have some real fun painting up their coats in all kinds of bizarre colour choices and in gaming terms that are LETHAL. Dan fields these against my Slaaneshi warband and game after game they cause me problems aplenty. 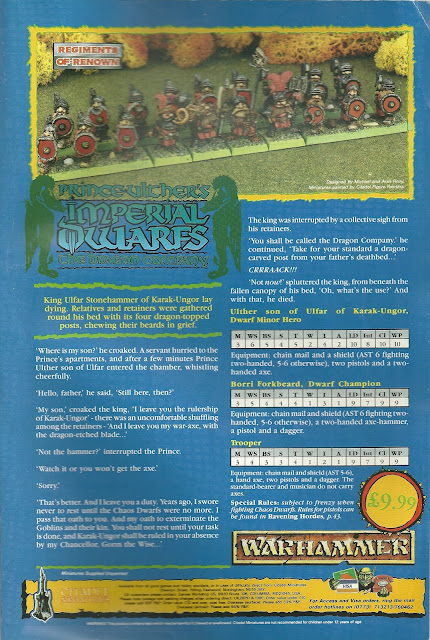 This set has classic written all over it! Regularly appearing on eBay for very high prices, though the models can be picked up individually if you're willing to do the research. All I can say about this particular Regiment of Renown is that I want them in my future dwarf army. I intend to paint them up in exactly the same colours as shown here. These are one of my favourite dwarf releases of all time!

Why do I like them so much compared to more recent releases? Its the beards. The beards are much more 'dwarf like' with these early sculpts, a cross between an unwashed biker and a viking, and the figures themselves look tougher and more believable. I prefer armour and weapons on 'good' races to be fairly realistic, leaving the more fantastic stuff for chaos.

Another nice touch, as I have said before, of this release is the little background story and full rules giving you some insight before you drop your money on the table.

Phew! That was a lot to talk about. Fantasy releases were certainly the priority in this issue.

So, how many of these do you own and more importantly, how many have you actually painted? Do you dislike any of these models enough to avoid them from all time?