Behind the scenes at Golden Demon 1988 and beyond: The photographs of Guy Carpenter. 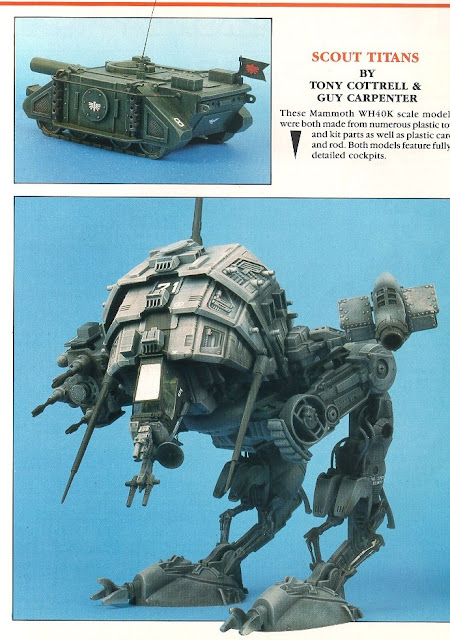 Many Old School scholars will instantly remember Guy Carpenter. He, alongside Tony Cottrell, produced the remarkable model (shown above) out of the old Star Wars walker model released in the early '80s. It was a image that was published in White Dwarf and the Golden Demon books, and one of the more memorable ones from the 1987-92 period.

I can certainly remember pouring over it in my younger days and cannabalising various toys I had around at home in homage to it. Thankfully, none of my creations have survived to the present day. It was through the power of social media that I was able to track down Guy and chat to him about the model above. After a while, he agreed to a longer interview about his experiences 'back in the day' and some of his wider work as I knew that readers of this blog would be very interested in seeing, and hearing about, his work.

Little did I know that Guy was sitting on a wealth of material, so I have had to split the interview over two articles. This, the photostory, will be the first, and a full interview with the mastercraftsman himself will follow shortly, along with lots of pretty pictures of his models. Among his material was a large number of photographs he took back in the later 1980s and early 1990s, mostly of Games Days and Golden Demons, but also images from the retail operation itself.

I am proud to present these photographs to you and hope you enjoy playing the 'spotting' game and trying to discover what you can see in the background of many of these images. Guy has provided me with some brief notes about when and where many of these pictures were taken and I have expanded on his notes to explain what else the images show.

All I can say before we start is, go get yourself a cup of tea, some biscuits or whatever makes you feel at home and enjoy this trip back in time to the Golden Age of GW and British gaming.

And here ends our photostory. I would just like to say a big thankful to Guy for sharing his photographs with us. You'll be hearing a lot more from him shortly.

Email ThisBlogThis!Share to TwitterShare to FacebookShare to Pinterest
Labels: Behind the Scenes Photographs, Golden Demon in the '80s, Guy Carpenter, Tim Prow