Acceptable in the '80s: White Dwarf 109: Monsters, Roks and Wheelz

Issue 109 of White Dwarf continued the trend of supporting GW's wealth of own brand games. And, if like me, that was your bread and butter, you'd be very happy. Additional background and rules for Rogue Trader, Bloodbowl, Adeptus Mechanicus and Dark Future, not to mention adventure for WFRP! Playing this 'family of games', I remember the time well. Each month would bring something new to the table.

Issue 109 was the second White Dwarf I ever bought. It had a fantastic cover too, a Cossack adventurer fleeing from hordes of Zombies. It was, of course, to be used later as the cover of Something Rotten in Kislev.

As I said previously in this series, Warhammer 3rd edition was essentially 'done'. All its supplements had been released, save The Lost and the Damned, and coverage for the game began to wane as the giant of RT began to assert its influence, and the devirse 'Big Box Games' began to be supported.

Still some great little articles remained to be published here and there. And it is towards these that we should now turn our attention. 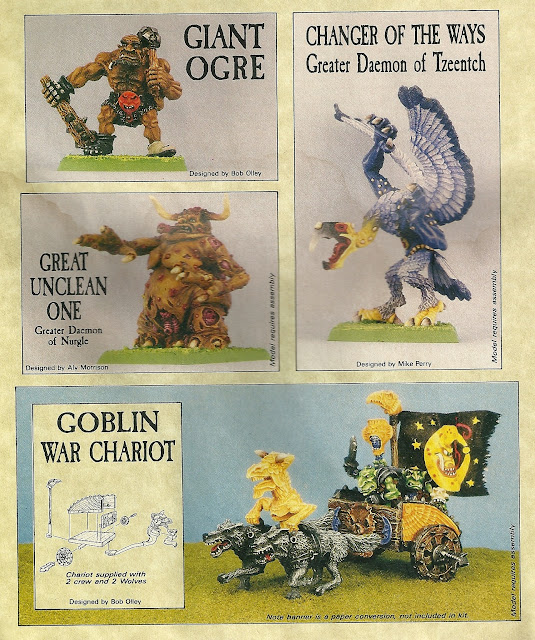 Now, though not exclusively for Warhammer, the greater daemons of Nurgle and Tzeentch were released at this time, alongside an extract detailing them from The Lost and the Damned. Looking nearly identical to the illustrations, these two kits are, for me, the definitive ones. And considering that the models that replaced them were, quite frankly, appalling ( save, perhaps the Lord of Change ) it wouldn't be until Forge World released there resin versions many years later that these entities got the sculpts they deserved. The Great Unclean One shown here would later be released with a range of different heads, arms, torsos and so on, as would the Lord of Change. This allowed some variation between the daemons which has yet to be replicated.

Though Iron Claw was no longer branded, Bob Olley was still producing miniatures for Citadel, or had sculpts left over that had yet to see the light of day. Here we see one of his later ogres, which as far as I am aware, can reach impressive prices on eBay. I can see why.

Warhammer's article here was a series of rules for (yet, another) orc stone thrower and the Bob Olley goblin chariot that we had seen before. As previously, these articles contained a mix of narrative/ background, rules and a Warhammer Armies Square. What was new, however, were the photocopiable banner designs that were added to the goblin chariot rules. Giving designs out like this became more common as the years went by, and here is is an early example. 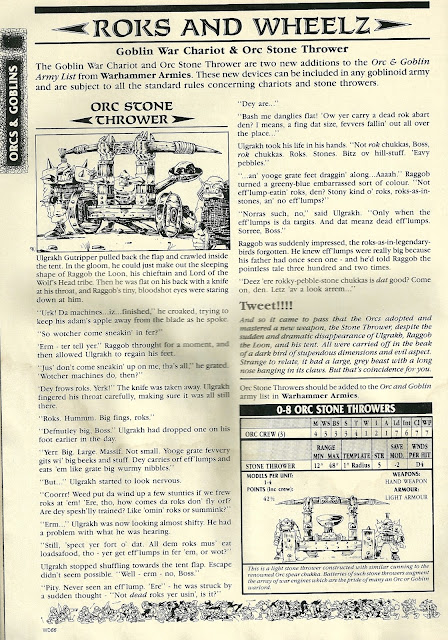 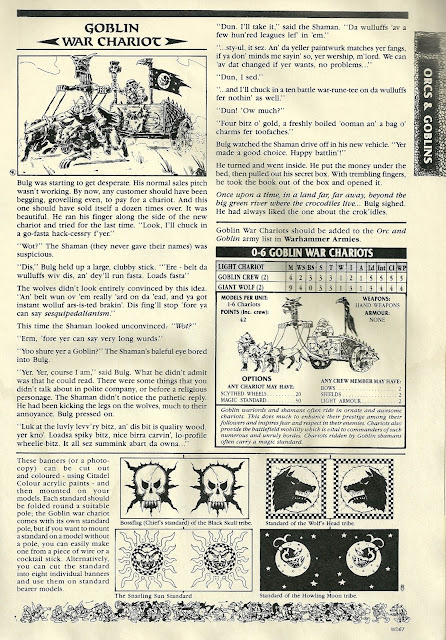 Before I disappear once more into the Wastes, I would just like to say sorry about the crinkly nature of these scans. My copy of issue 109 was soaked by my curious daughter. At one year old, she found her way into our bedroom and split her drink over a pile of old school mags.