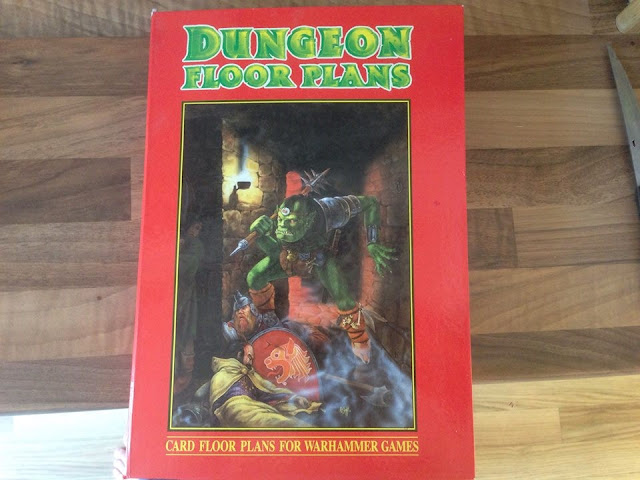 I certainly do! And I have known for sometime that a copy of the late '80s publication was lost somewhere in the impenetrable maze that is my garage. Quite by accident, I stumbled across it looking for some gardening tools still housed in the sturdy box in which it arrived.

Its not my original copy (I cannot recall what happened to that) but it's an eBay find that I paid for, received and then misplaced soon after quite some years ago. I am glad that I've found it again as it is packed full of really useful stuff for the Oldhammer gamer. Nor is this the first time I have written about this set, for way back when in the early days of this blog I posted up some high quality scans of a few of the components. Have a look: 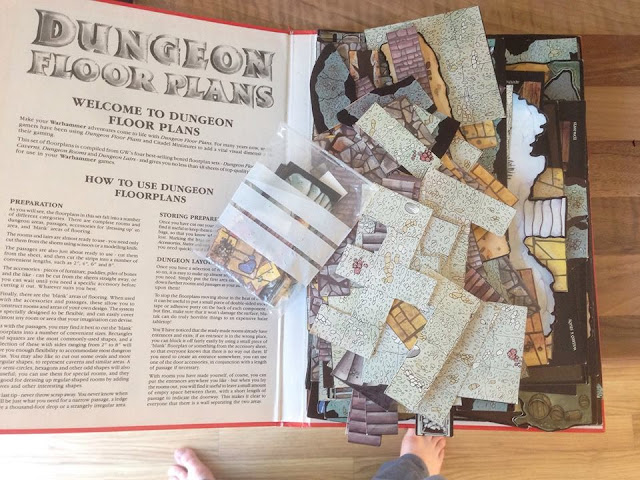 Opening up the book reveals that the set has been entirely cut out, though not by me, and is presented as quite a jumble. We have good quality scans of Warhammer Townscape but try as I might, I cannot find a similar resource for the floor plans. Anyone know of one? I'd like to browse through such a document to check up on what I have, and any missing pieces, though from vague memory I think I have most of the large rooms as far as I can tell.

Of course, back in 1989 this wasn't really a new product. It was a collection of pieces from previous releases ( Dungeon Floor Plans 1, Dungeon Lairs, Caverns and Dungeon Rooms) that might as well have been launched in Ancient Rome for all their availability to me. And as a gamer whose teeth were cut on Heroquest, the options this book provided you with was immense. It still is... 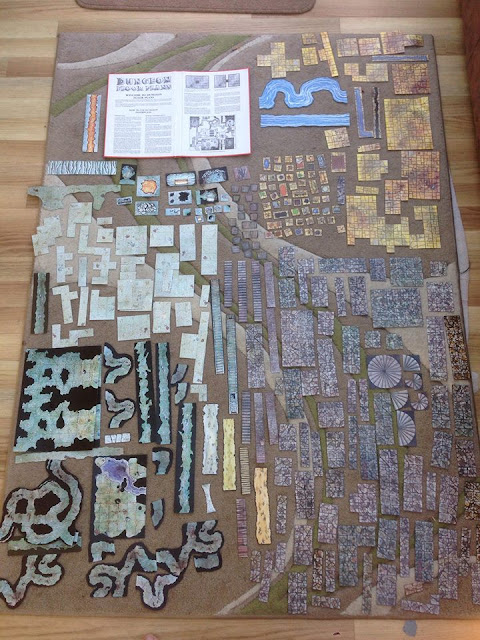 This photograph shows you JUST the corridor sections that the book provided. Of course, these sections were cut out by the previous owner but they did a decent job and there are a great number of instantly usable sections, some better looking than others. I mean, I just love the yellow and grey stone sections (and I have a feeling that there was more yellow that I have in the original uncut set) and they remain perfect for representing tunnels or dungeons quickly in games of Old School ( or even New) Warhammer or Rogue Trader. The pale grey stuff is very poor in comparison and to my eyes, looks basic and crappy.

In addition to the tunnels themselves, there are steps, ladders, chasms, rivers, sewage slicks, stairways and not to mention a wealth of smaller detail cards containing doors, shields, bloodstains, traps and so on. Just this part of the publication makes it a very useful thing to own and use.

But its just half of what the set contains. 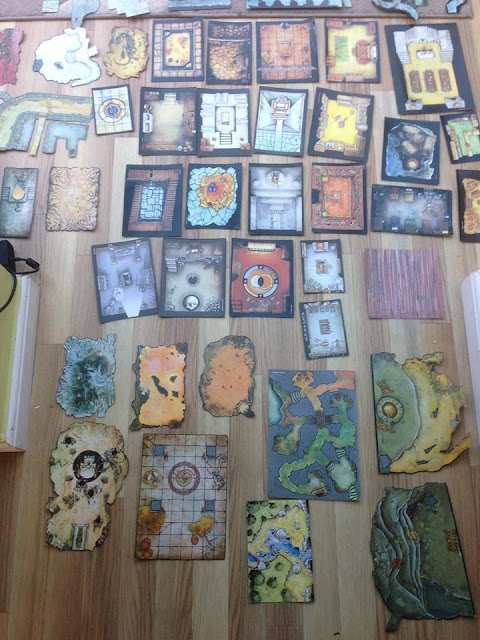 The second half of the set contains all of the dungeon rooms and chambers. These are extremely varied and the quality of the design and printing still holds up today, especially when you consider so many people use printers and photocopiers to get hold of out of print materials easily. Just casting your eye over many of these designs gets my creative flair racing and you can devise a wealth of intriguing scenarios for players in minutes.

My son, who is five, found the Dungeon Floor plan set utterly fascinating and spent some time exploring each of the rooms. Without me needing to explain how the set worked, he constructed his own dungeon using the linking strips to make corridors. Bad monsters lived there, he told me with authority. It's that easy to use. 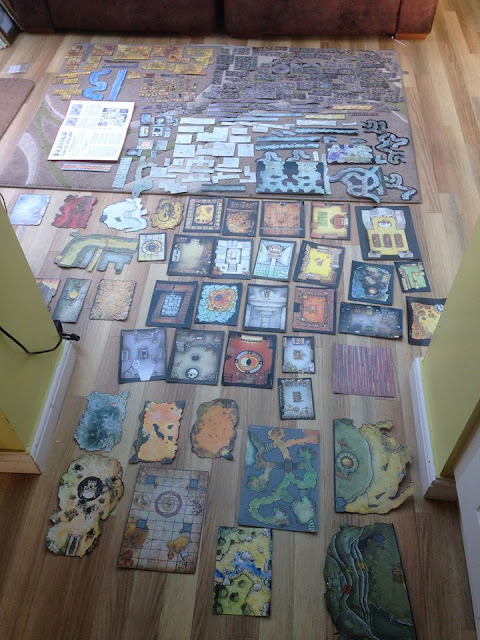 I struggled to get the whole set into a single frame and this is as close as I could get! As you will have seen, this is a fantastic resource and well worth tracking down if you can, or indeed digging out of your archive if you have one buried away. I have seen people make use of the tiles from Advanced Heroquest and Warhammer Quest at Oldhammer events, but I feel that this floor plan set is superior to both of those due to the sheer variation. And apart from a few duff corridor sections in the grey there is little to complain about really.

Time to build a dungeon!