Pantheon of Chaos: The Realm of Chaos inspired miniatures project 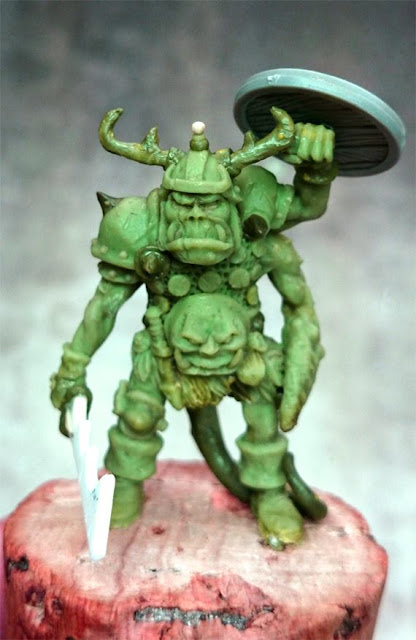 As long term readers will know - I hate crap adverts on blogs. I mean, who wants 'cheap, fast Warhammer' when they are browsing the Oldhammer Community, eh? But I feel that there is nothing wrong in actively supporting wargaming or miniature production, as it is why were are here. Recently, I have been sharing much of the work Tim Prow is doing with his Diehard Miniatures project and the response from you guys has been very good, judging by the page views anyway. I also mentioned that I had heard about the fate of the models produced for the aborted Antiquis Malleum range that despite having success written all over it, just couldn't get itself off the ground.

Well today's post will put you in the picture about what happened to the models produced for that project which were not absorbed into the Diehard range. Its called the 'Pantheon of Chaos' and the leading light behind the project is Diego Serrate (who lives in Zaragoz by the way - no wonder he's so touched by the winds of Chaos!)

I caught up with him and decided to pick his brain about what he plans to do in the coming months.

RoC80s: So what can you tell us about the Pantheon of Chaos project? I mean, how did it start and who is involved?

DS: I have a good relationship with Mick Leach, and after two years passed without me seeing any movement on those minis, I just decided to ask him about the possibilty of getting them for our range. as well as the concept work Tony Ackland did.

It all started because after my Space Riders project for Rogue Trader minis , many people asked me about doing "fantasy" themed miniatures, so I started to play with the idea of making miniatures inspired on the old chaos books illustrations. Shortly after I began work, I realised it would be a much bigger task than I had expected so I asked Christian to join me on to be able to cover a wider range of miniatures, and well... the project grew and grew from there!

Once all that was in hand, we put together a wider creative team behind the Pantheon: David Stafford who is making some concepts and the game system, Rochie Rochfort wrtting background and making concepts too, Mustafa Bekir is the main illustrator, Alessio Cisbani and Christian are the sculptors along with me.

RoC80s: You mentioned you were able to purchase the concepts that Tony Ackland produced for the project.

DS: Oh yes , I want to thank Anthony Ackland right here, because I just love him and his work! Also he was SUPER kind when dealing with all the "unused" Antiquis Malleum work he did for Mick, and passed it all to me. Even adding some extra art he already completed and letting us use it to illustrate our rulebook, cards or whatever!

And health permitting he will be doing a couple more pieces for us soon!

RoC80s: So how many models do you intend to produce as part of the Pantheon of Chaos project?

DS: Apart from the Antiquis Malleum ones? There are in fact just an extra of eight models on top of our 60 model goal. What we want to create is a whole game universe which in some way will be inspired by the Realm of Chaos age and have very 'old school' vibe in general terms. Being much less competitive than other miniature games, and much more concerned with the background and the narrative behind the game.

And if its a success we have a lot of " on hold " ideas to expand with, too!

The old chaos powers that inspire us will be represented by elemental forces, lets say each chaos god use one element to expand itself into the real world e.g. Khorne- Fire , Slaanesh - water , Tzeentch -air and Earth - Nurgle.

At the moment we have completed four new Champions, six beastmen, a couple thugs, one demon and have many others in the works.

RoC80s: Why don't you take us through some of those models so we can see what you've been working on? 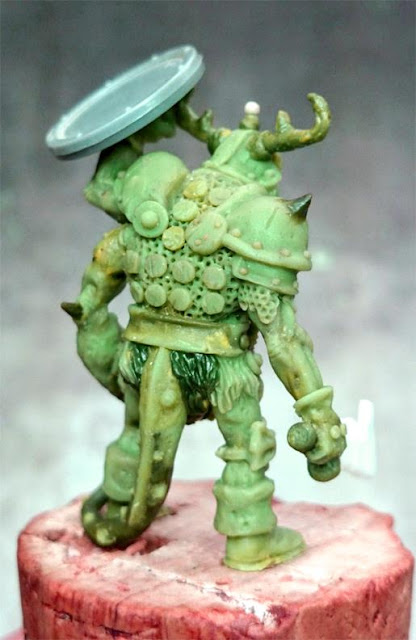 GS: Okay, here is the rear shot of Gorak the Twisted (who's image began this article - Ed).This one will be an "undivided" champion. He's a corrupted orc, a long time ago he was a powerful orc chieftai,now a devoted server of chaos. The idea is to have the "undivided" champions being represented by some of the most iconic races. 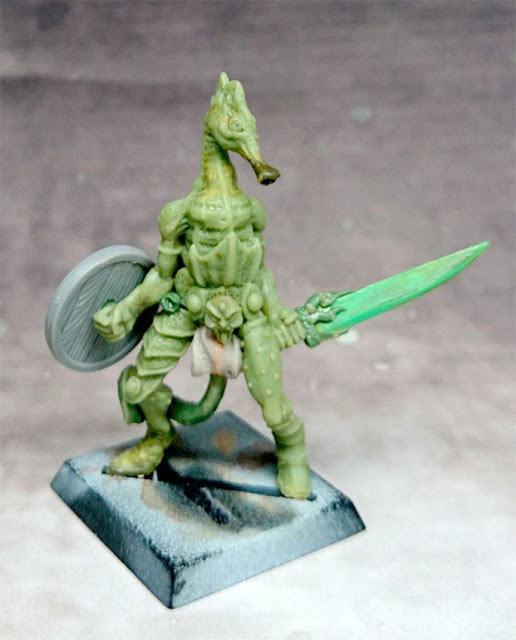 GS: Now for our "Water" champion: Sshleine Blackwater. The idea of making a Sea horse crossbreed champion was just too cool to not do and here is the result!
smile emoticon

I also sculpted some "slaanesh" related elements, like the boot with small balls and its graceful pose representing how fast and quick it can be. 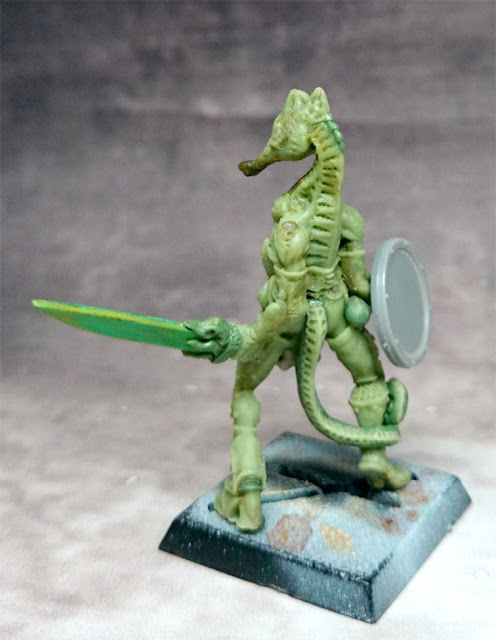 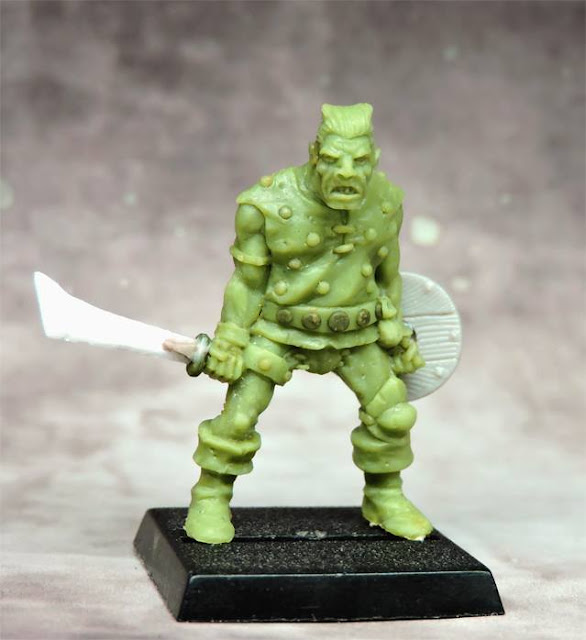 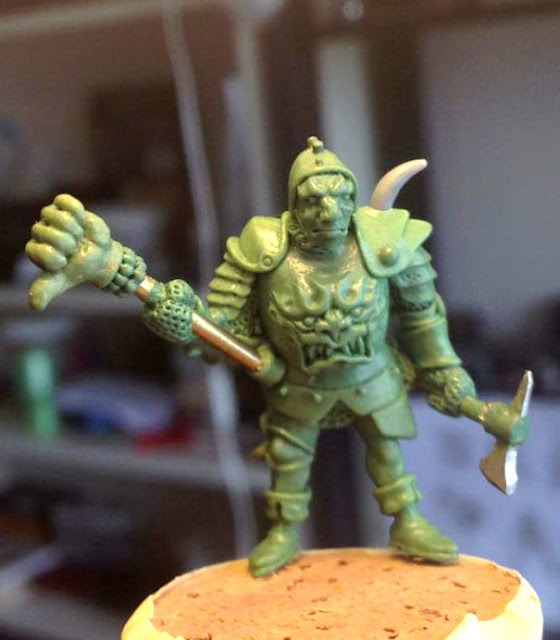 GS: These two are most likely thugs. The one with thumb down mace was sculpted by Christian, and he will be a thug leader probably. The sword guy is by me. There will be many more thugs in future. 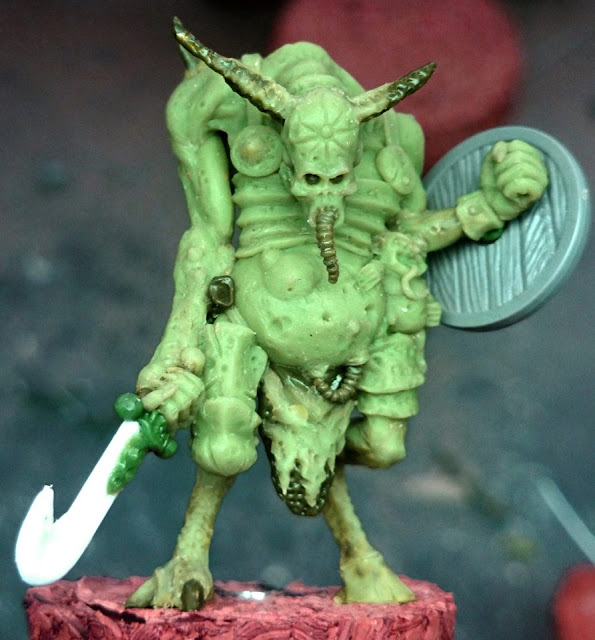 GS: Ok this guy "Festemus" is the VERY first model I did for the project and its clearly inspired by a very famous illustration but with some small changes here and there.
wink emoticon And by know its the miniature the people seems to like the most smile emoticon 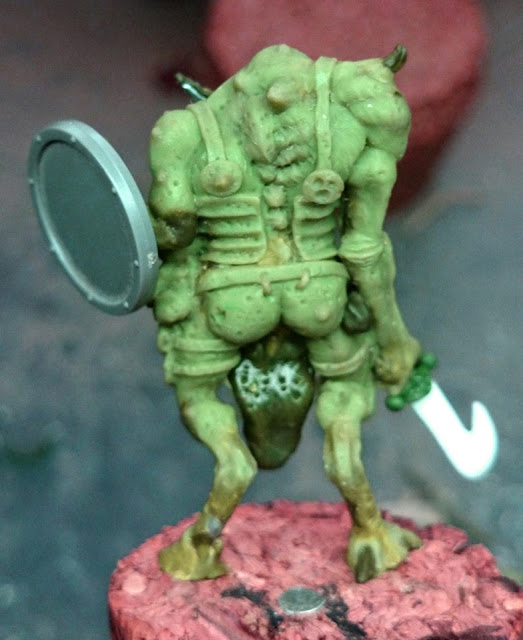 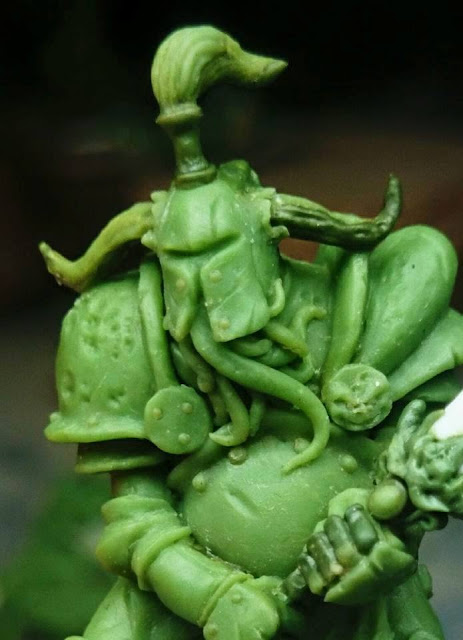 GS: This guy is the second one I made, he will another Earth champion. As you can see it shares many elements that we used to see on the old citadel chaos miniatures but also showing some fresh ideas. 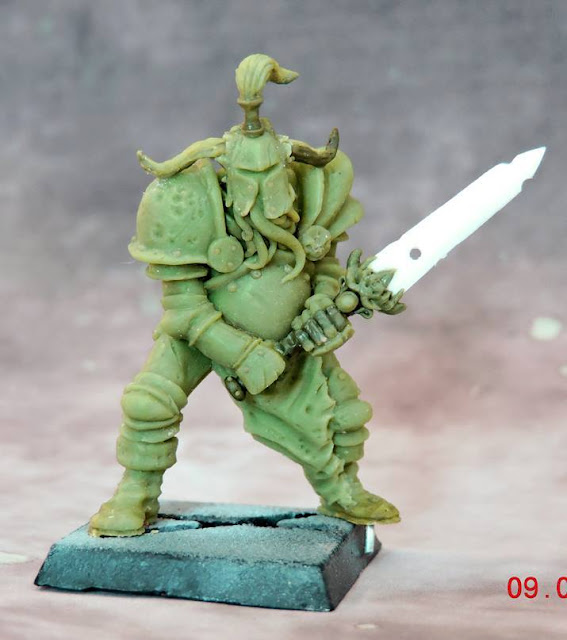 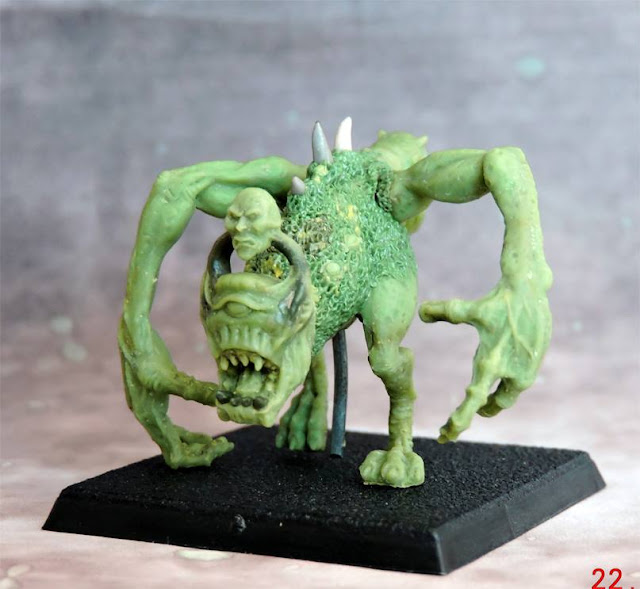 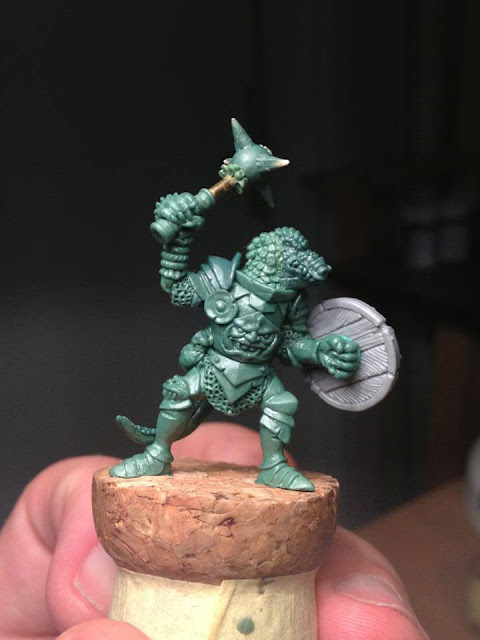 GS: Now the beastmen and daemon: We wanted to do "real" beastmen , not just goatmen everywhere. 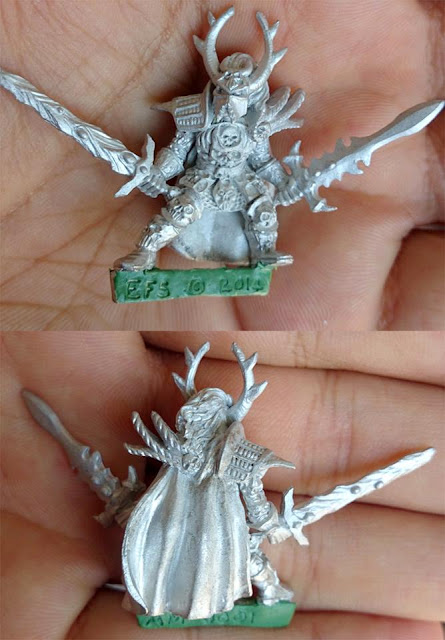 RoC80s: Diego, its clear to me that you are an exceptional sculptor. Apart from the source material, where do you get your ideas? Is it concept work or just made up on the spot?

DS: For me, many ideas just come to my mind as a mash-up of all that I've seen. There's enough inspiring art around online or just our own group artist to nail a design. For example Christian is working almost enitrely from his imagination with the beastmen, while Alessio already has a lot of concepts complete for the chaos warriors.

RoC80s: How will these models be cast? Plastic, resin or metal? And how much do you think they will cost?

DS: We will produce this models in metal - there cannot be any other way!

We can't say much about production yet as we still have a long way untill its all done, but I think we can offer very good prices for our miniatures, as our intention is not to "drain" customers money with our first wave and then run to away to retirement!
We really want people to feel comfortable collecting and playing with our minis and being confident to not be screwed after the first waves. 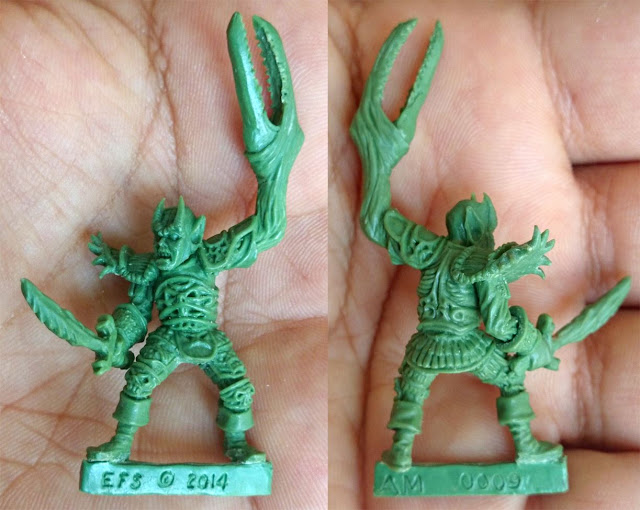 As with Diehard Miniatures there is a Facebook group for the Pantheon of Chaos project you can subscribe to in order to keep up to date. There is loads more to see over there so just pop over there now and have a look.