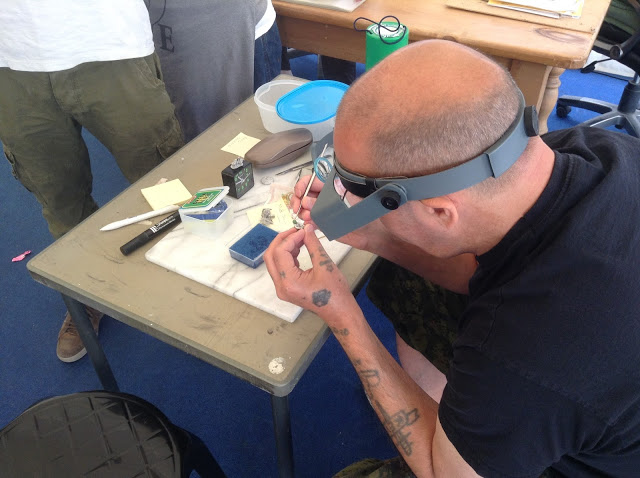 The Goblinmaster emailed me the other day about the money he raised for charity at the Oldhammer Weekend. If you didn't know, Kev endeavoured to sculpt a face on any miniature given to him to help raise much needed revenue for a child who had suffered burns. And despite the poor light, wobbling flooring and some pretty extreme requests, Mr. Adams just ploughed on and banged out face after face to the amazement of many observers, myself included.

A few years back, before Oldhammer existed, if anyone had suggested that I would one day watch the great man work - let alone witness him sculpt the faces of my kids (from a picture from the wife's iPad) - I would have told them to 'go away' in slightly stronger terms. But there you go...

Kev says that the money was paid in earlier this week and went to Enzo's Friends, a charity that supports children with burns and their families. Its based, as far as I can tell, in the Birmingham Hospital Burns Unit. I cannot recall the exact sum he raised on the day, but it was certainly in the hundreds of pounds. The Goblinmaster is also keen to stress that the fantastic idea for the face sculpting wasn't his and credit must go to the mighty Bryan Ansell of Wargames Foundry.

I asked Kev if the face sculpting for charity was something he would like to do again in future, and he said that he is more than happy to continue doing faces whenever we 'have a do in the tent.' So if you haven't yet had the chance to get something original done by the great man himself, there is hope for the future.

Mr. Adams went on to state that he had heard there was a buzz online about the faces he created but he hadn't the chance to see his work again. Hence this blog will continue with a gallery of some of the faces he completed on the Saturday. If you have a miniature Kevin worked on at the event and have a picture of it online could you do us a favour and link to the image in the comments section. That way Kev can look at what he achieved in quite challenging circumstances.