Like many in the toy soldier world, I was at Salute today. I am sure the blogosphere will be alight soon with tales galore of the day and plenty of pictures of all the latest offerings from everyone from Bicorne to Spectre. But instead of just posting a few random snaps and writing about the loot I brought home, I thought I might write instead about some of the wonderful people I met.

After all, that is really what these big events are about - meeting people. I can buy practically any model online from the comfort of my own home, but online chats cannot ever compare to meeting face to face with fellow enthusiasts.

I was lucky enough to have my friend Stuart Klatcheff accompany me today, despite his best efforts to try and persuade himself not to go with an injured leg. And the drive up was a very pleasant way of talking about the main topic of the day, miniatures and of course, Oldhammer itself. We were a little unsure how effective the new 'e-ticket' system for entry would be and, despite a shaky moment with Stuart's iPad not allowing the scanner to read the barcode, appeared to run quite smoothly.

We were both inside the main hall by about 10:20 and promptly made our way towards the Warmonger stand. This was very obvious due to the enormous banner Marcus Ansell had made. Steve Casey, the Citadel Collector, was there with his fetching money bag and equally fetching Welsh twang, and was more than eager to relieve us of our cash. The Warmonger team were extremely welcoming and friendly (so big thanks to Steve and Marcus for their generosity) as was the LEGEND that is the Goblinmaster.

Kev was in fine form. He whipped off his gobbo-specs to show me his eye and explained that he was now fully functioning once again and needed no further chopping up by surgeons. So his attention is now fully focused on Warmonger and the amazing range of models he has produced so far. We had a long old chat and I took loads of pictures of his new greens (as well as picking up some of the first castings from the most recent batch that haven't quite gone on sale just yet) so I intend to do a Warmonger Special post shortly to fill you in with all the juicy news and share some of the lovely models that are now available.

There was a rather battered brown box of extra goodies on the stand for those of us that purchased models. Another one of those 'lucky-dips' that were put on during last years's Oldhammer Weekend. I picked up some absolutely amazing little 'orklings' and I have already made a small diorama out of them (very small actually). They are stunning. And there is more imagination on show in those tiny little goblinoids than in many of the other ranges at the show put together!

If you couldn't get to Salute and are interested in the Warmonger range, why not pop along to their Facebook page and have a gander. Lovely stuff. There is also a rather bizarre youtube video of some of the models here.


After weighing ourselves down with stock, Stuart and I moved on to the Foundry stand, keen to meet up with any other Oldhammer types who might be lurking there at 11am. We arrived to find this man, Tony Hough, flashing his folders of original Citadel, Games Workshop and Fighting Fantasy art. As always, it was a pleasure to see Tony and he was happy to let fans of his work browse through his intricate drawings in awe.

Even though he sold several pieces at the show, he assured us all that he still has lots of pieces available for anyone interested, including the famous 'Patriarch' illustration from White Dwarf. Be prepared to dig deep into the hobby fund if you are after that, as it seems that many people have tried by none have managed to persuade Tony to relinquish his personal favourite piece. Perhaps you could be the one?

If you are interested in getting hold of some of Tony's work, why not wander over to his Facebook page and have a browse through his galleries?


A gaggle of Oldhammerers formed after a while and it was great to chat about Tony's work with them. We met quite a few eager fans of Old School Citadel, including two Spanish enthusiasts wanting to know more about where to stay in August - so if that was you, hopefully you have had some success! Diane Ansell was running the Foundry stand, which looked far too small for the range of models they brought, but we managed to squash ourselves through the crowds to make essential purchases of ex-Citadel sheep, vikings and medievals.

Having a chance to talk to Diane about the event in August was very welcome, and I discovered that there are couple of things in the works that we will need to talk about closer to the time - most importantly the food option for Saturday! Diane was, as ever, the perfect hostess.

So thank yous need to speed her way.

While we were admiring the historical ranges the Foundry had to offer, a familiar face (sadly, without a Megadeth T-Shirt on) emerged from the backpack weighted crowd with, a rather weighty backpack actually. It was none other than Tim Prow, former 'Eavy Metal painter and all round sculptor extraordinaire, with details about a formerly TOP SECRET miniatures project that is now only SLIGHTLY SECRET.

More is to come in the coming days, but I can tell you that the project is to be called DIEHARD MINIATURES and will contain some of the models from the aborted Antiquis Malleum project, as well as a whole lot more, in the coming weeks. Tim was armed with his rather flashy tablet (sadly no embarrassing photos were forthcoming) and showed Stuart and myself a great deal of exciting concept and WIP miniature work, including probably the best sculpted skeleton I have ever seen.

I have a little more to share about this shortly, but will save it for a post of its own.

After saying our goodbyes to Tim, we bumped into a fellow Oldhammer T-shirt wearing gentleman who was very pleased to have picked up a old Kev Adams hill troll model in decent condition. He looked a bit grimy (the hill troll, not the gentleman) but nothing that the Dettol wouldn't fix one at home. So well done to that man on your most excellent find. 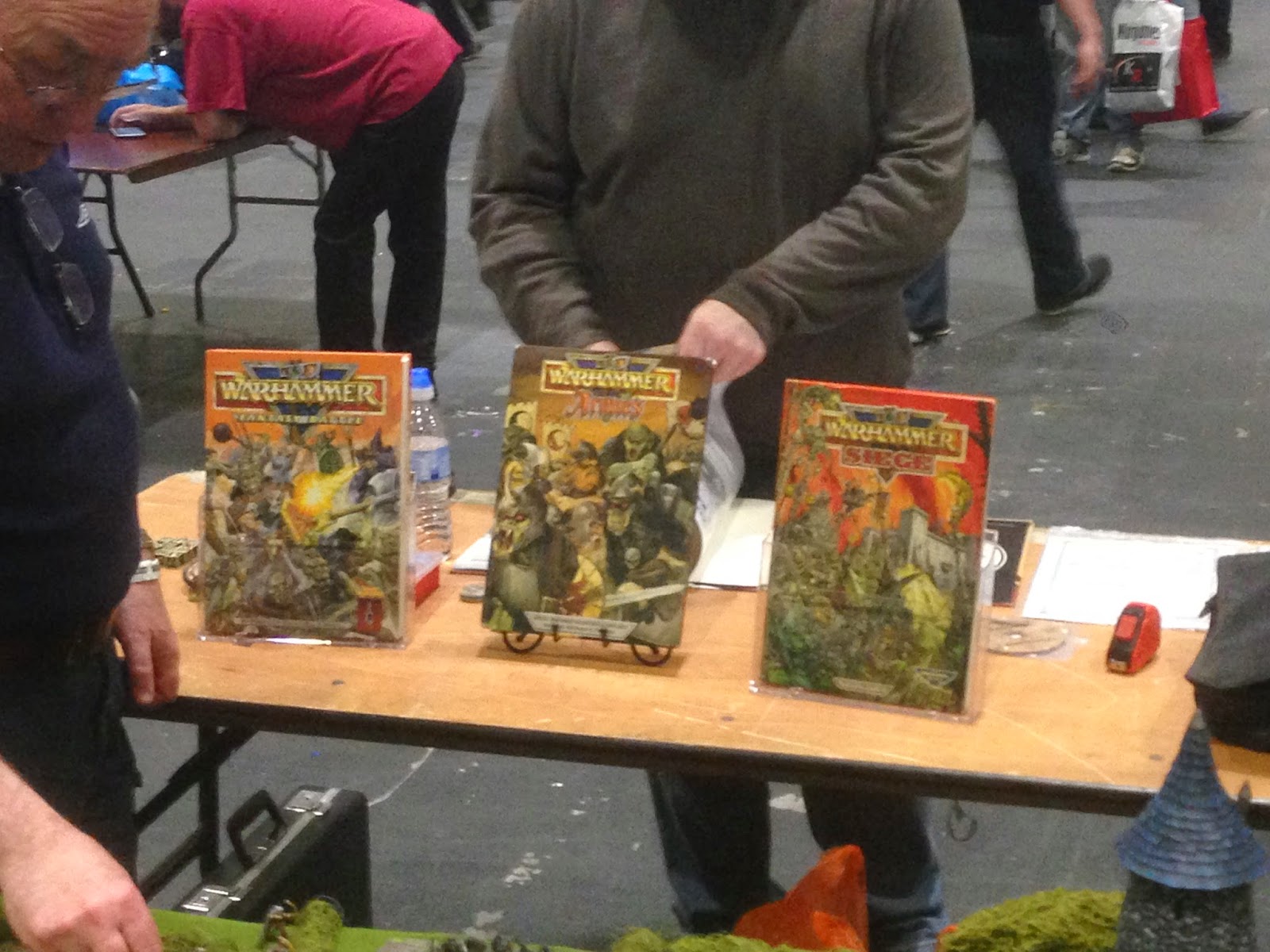 With the shopping and socialising done - we struck out into the show proper and wandered the retailers and exhibition games. It was really exciting to find an Oldhammer game in full swing within minutes, complete with a lovely display of the old rulebooks. Stuart and I spent quite a bit of time chatting with the team behind this ('Ardhammer') and taking lots of photographs of the set up.

There was a real mix of models on the table. With more recent plastic sculpts sharing space with classics from as far back as the 1970s.

I will leave you with a the best of the photographs I took of this game and head to bed. There is more McDeath to paint come the morning, as well as some brilliant Warmonger pieces. All that there is left for me to say is a simple thank you to the Salute team who put on another great show, and I look forwards to attending again next year! 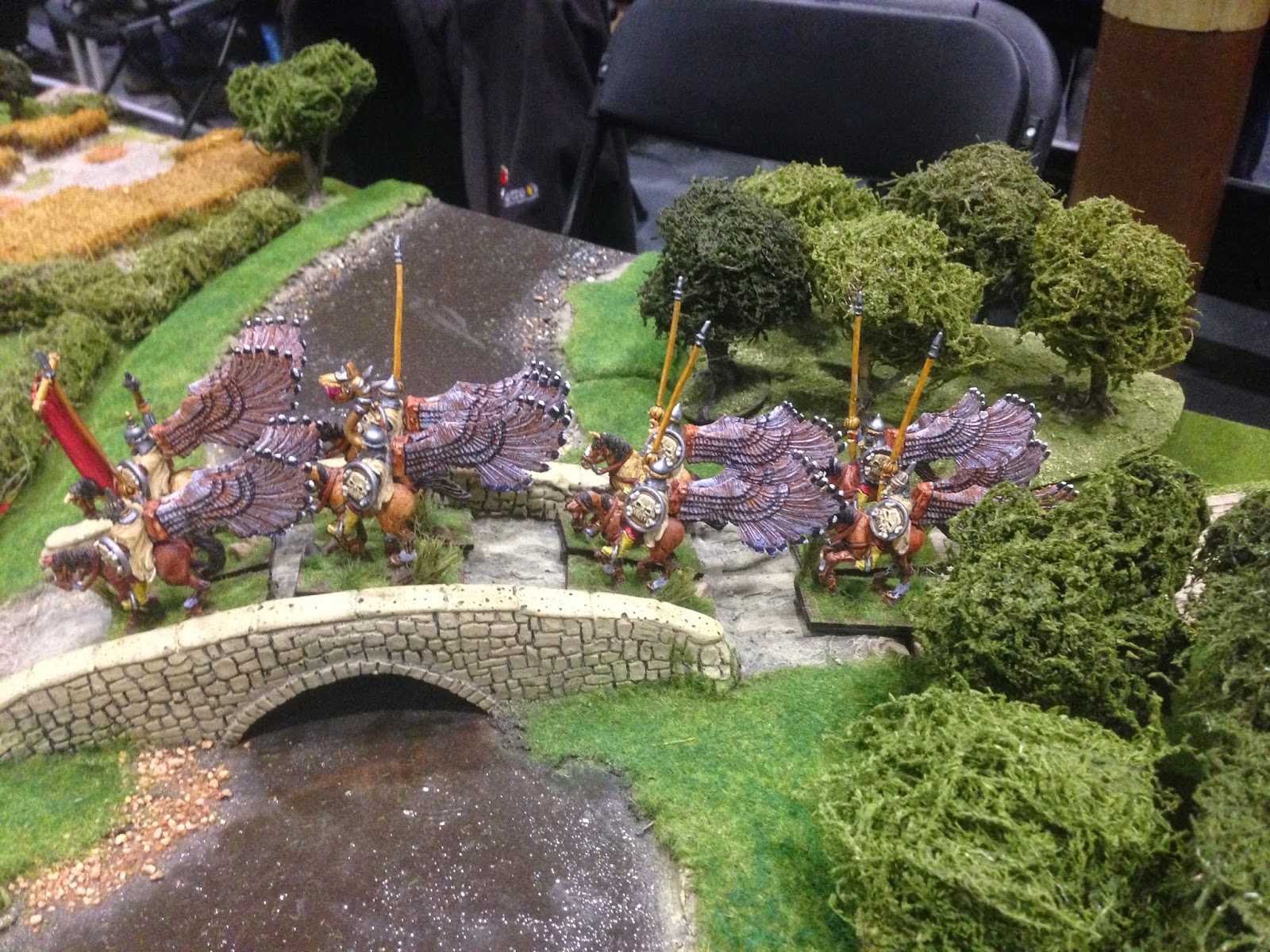 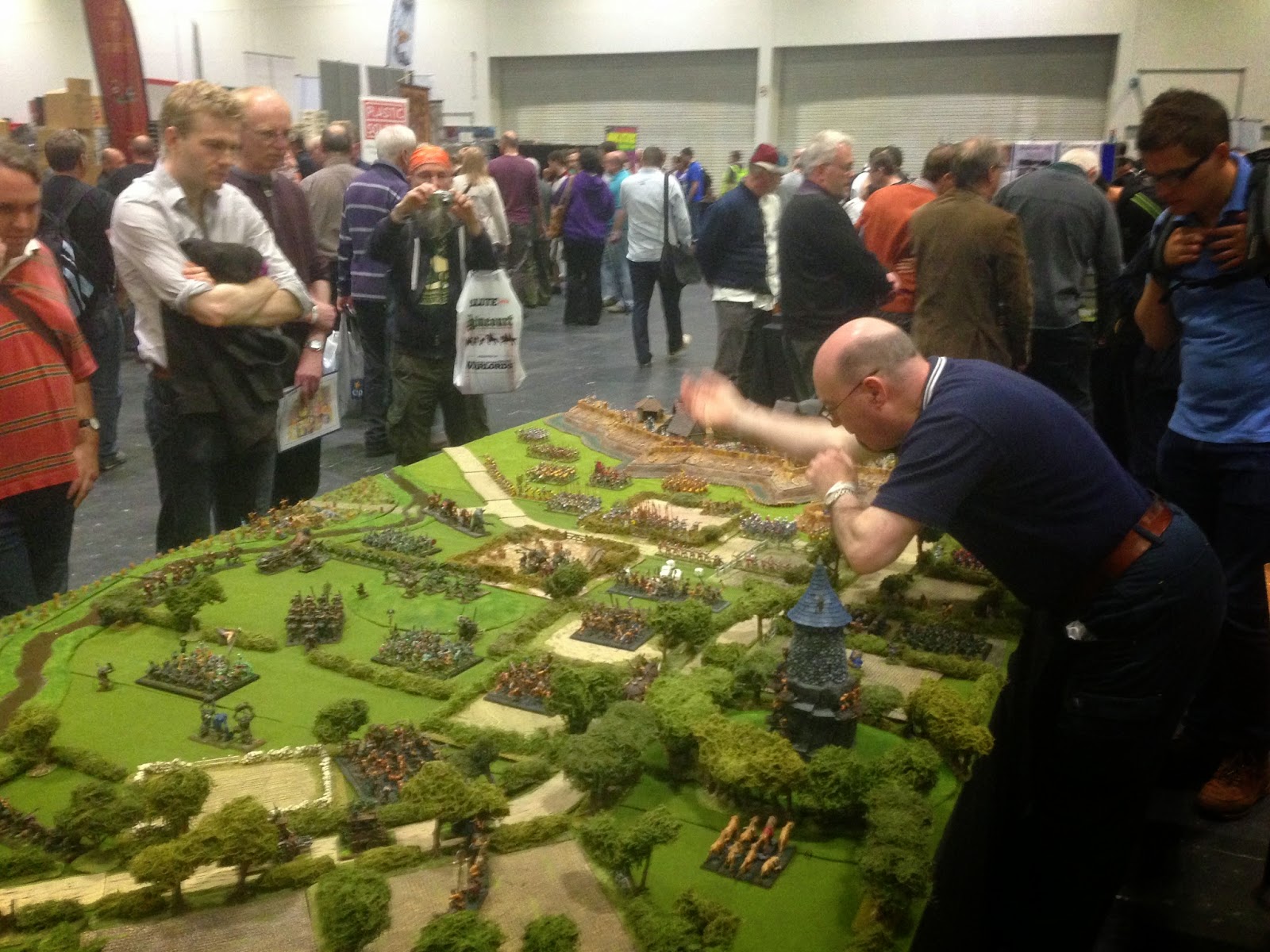 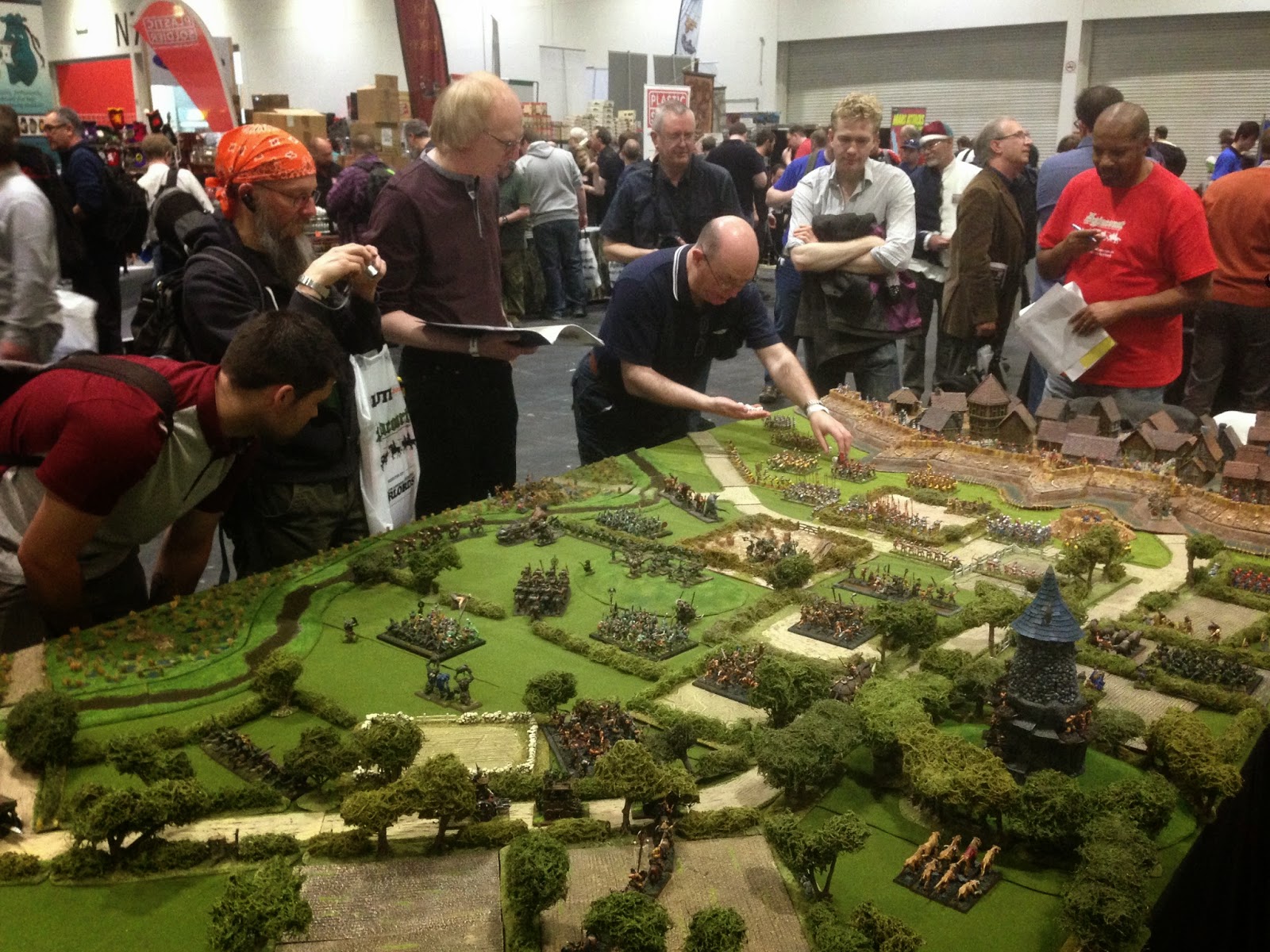 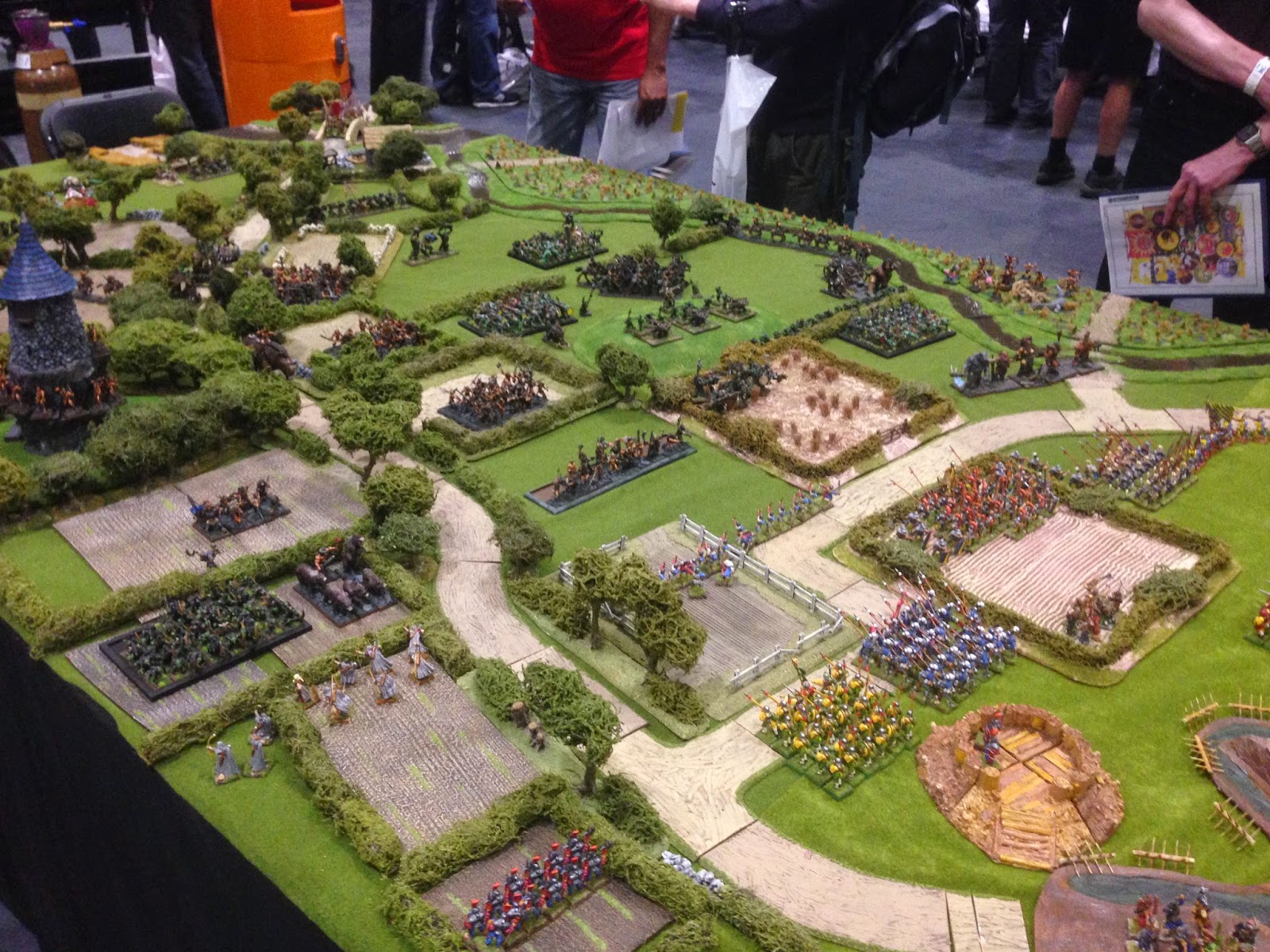 Email ThisBlogThis!Share to TwitterShare to FacebookShare to Pinterest
Labels: Salute