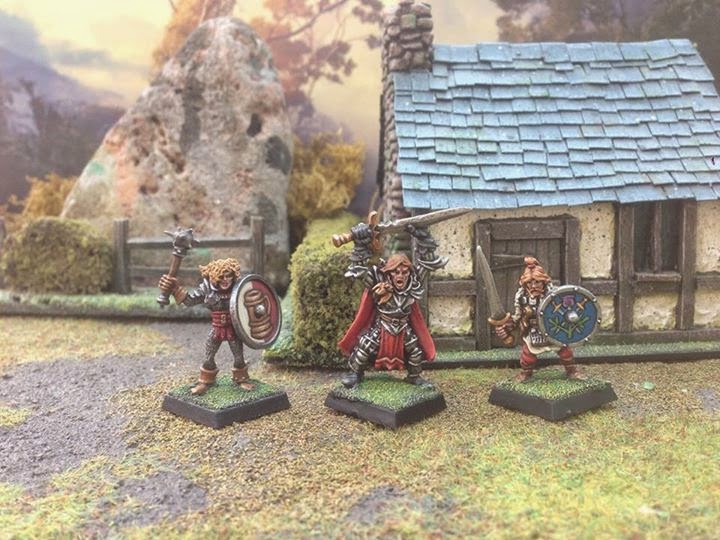 I have been busy using the remaining days of my Easter holidays to get some more of my McDeath figures tableworthy. I still have several models as work-in-progresses, but these are in good enough condition to show. The light wasn't great when I took these and I apologise for the rather cloudy look of the photograph.

Right, let's talk about Julia McEwman first. I really like this model (she is called Mace Lady elsewhere in Citadel land) and was available for many years in the catalogue. What I really appreciate about here is that she isn't a fantasy female stereotype. She lacks the atypical lowcut armour and improbable taste in clothing and instead, is much more realistically armoured in mail and pauldron.

Though I am playing a bit fast a loose with the McDeath background with my take on the scenario, I was happy to keep her blonde hair. This was fairly easy to achieve with just a simple base colour (one of the modern GW ones with a really silly name), old school Chestnut glaze over the top followed by a good drybrush with the highlight once dry. Her face was just my usual method for flesh.

I struggled with her armour. Painting steel is a real problem for me and I hate it. I am never happy with the finished result and need to work on getting the look 'right' in my eyes at least. I will have to paint up some armoured chaps in the near future. I used the Foundry metallic paint for this, using a mixture of dry brushing and layering. I used a very watery blue/black glaze over the top to take the shine off the finish.

The leather for her boots was a 50:50 mix of brown and orange. I added some of my preferred Foundry Boneshade to lighten it up and create the definition. I did something similar for the girdle.

Julia's shield saw a lot of attention and I am happy with the result. The background was originally all red (to tie in with the girdle I mentioned) but it ended up somewhat lacking. So I added an off white half and the job, as they say, was a good 'un.

Donaldbane (or Elric gatecrashing Albion) isn't a great figure. He has had a rather long and chequered history in Citadel Miniatures, but is an obvious Kinslayer knock off. Earlier versions even have Elric on the base. I found him hard to paint. A large part of this was the fact he is nearly all silver armour, but I struggled on and was happy with the finish. Its obvious that I need to do a little work in the plate armour department in the near future.

The only part of the model I did enjoy working on was the cloak. Mixing two colours to create a base has become fairly common for me. For the cloak it went like this. Dark red and brown for the base, dark red and light red for first highlight, light red and orange for second highlight and just orange for the final stage. I mixed in a little of the base red into the yellow to help harmonise the yellow zig-zag pattern in with its surroundings.

And finally, Dokko. My favourite model of the three and part of the Fighter range originally. A great model to paint and I went to town making him look suitable barbarian with lots of natural whites and creams and browns. As I had done with Donaldbane, I used layering for his hair but found the finish a little too stark when compared with the rest of the model. So I whipped up a quick chestnut glaze and washed that over to bring the colours down.

I spent ages on his shield aswell -trying to get the crest image I found for his clan in the McDeath background. I opted for a blue background colour purely because I had used some much red.

Right, let me cook the family their dinner, change my water over and start work on the next of my McDeath models.
Posted by Orlygg at 07:36