Some time ago I decided to reduce the volume of my collecting. Hardly a day went by without a package arriving at my front door, and to be honest with you, at that point in my life (I had a rather nasty job) I needed the trusty lead pick me ups to help me struggle on. Or such was the excuse I told myself. Later on, I made a promise to try and paint more than I buy and I have stuck to it pretty much. What helped was the fact that I limited my collecting to a few ranges. What hindered was the fact that the three ranges I chose to collect contain some of the rarest and pricy models in the collecting business: McDeath, Shadows Over Bogenhafen and Death on the Reik.

To be honest, I have been pretty successful and have really enjoyed the thrill of the hunt. Sure, I have had to pay out a fair bit of cash for a few of the models in open auction, but that is all part of the fun! Just like finding a sought after miniature for very little.

In truth, few of the models from the ranges I describe are truly rare. Most were available for years and in years in different ways but the models we are going to discuss today are different. They were part of limited sets and are very popular.

Renata, looking good above these words, is one such model. She was only available, as far as I can tell, as part of the second Death on the Reik deal - along with Wanda 2 who Steve Casey uncovered recently - and is subsequently difficult to find. Expect to pay anything in the range of £80- £100 for her.

Now, I write this post because I was rather confused to what Renata should actually look like. The internet doesn't throw up much in terms of visual material when a Google search is conducted so I thought I would take a few snaps to help those intrepid hunters of old lead who come after me. So take a good look before I paint her.


There appears to be some confusion over the differences and similarities between Renata and Sandra Prangle from McDeath. Some said that the models were the same, others different. There was no definitive photographic proof that I could uncover so I provide it here. Renata, it seems, is armed with a bow while Sandra holds a spear, though the basic body, as you can see, is pretty much identical. Where Sandra has a boss to hold a shield on her back, Renata has a quiver, as can be seen in the photograph above.

Sadly, I don't own Sandra Prangle yet (though Renata will be standing in for her if I ever play a game of McDeath in the meantime) but I have managed to find this fairly decent picture of her below so the differences can be seen clearly. 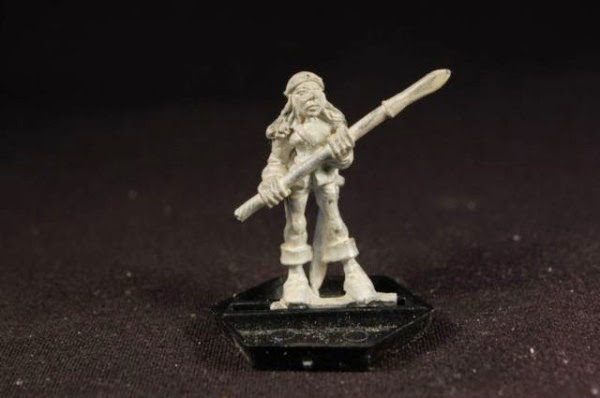 Email ThisBlogThis!Share to TwitterShare to FacebookShare to Pinterest
Labels: Death on the Reik, McDeath, Renata