In the immortal words of Noddy Holder, "its Chrissssstttttttmmmmmmmaaaaassssss!" And the moment I first hear that song on the radio the build up to Christmas begins for me... As does the need to decorate the front room and put up the tree, all of which I have done today.

This go me thinking of all the other Christmas traditions that my family have. One of these traditions is taking part in a pub quiz at a local drinking establishment. Now, for those international readers who are not familiar with a pub quiz let me attempt a quick definition. 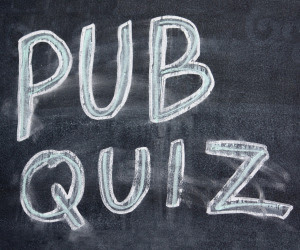 You attend a pub. You buy drinks (a great number, usually). You set down with your team next to a roaring fire. You are asked different sets of questions and have to answer them. These questions are usually ordered in types, e.g. general knowledge, picture round etc. That is about it.

Then I thought, wouldn't it be fun to have a go at a Oldhammer Pub Quiz. One hundred questions to tax the brains of fellow leadheads over the Christmas period? I could even offer a prize to whoever answered most questions correctly!

So here we go then, the first 25 questions. Some of the questions are easy, some are far harder, but all relate to GW products released between 1987 and 1992. So, how many of these can you answer?

3. In which year was the first Citadel Miniature released?

4. Name all nine colours in the Creature Paint Set.

5. What was the name of the evil wizard in the original game of Heroquest?

6. What is the WS of a Bloodletter in Warhammer Third Edition?

8. How much did the original Combat Cards retail at in 1989?

9. Who designed the first Adeptus Mechanicus range for Rogue Trader?

10. When was Phil Gallagher editor of White Dwarf?

11. How many points was a Sea Elf Wardancer worth?

12. Who painted the cover of Warhammer Armies?

13. What was the range of a Torinoko Grenade?

14. What was the maximum number of Gnome warriors a Dwarf army could take on a competitive game?

15. Who provided the art for Forenrond's Last Stand?

17. On what page of the Warhammer Third Edition Rulebook does the cover painting of Skarloc's Wood Elf archers appear?

18. What race do Treemen hate?

20. Name one of the writers of Critical Mass.

21. Which race does Rick Priestley select to explain model preparation in the Third Edition rulebook?

22. Who provided the sample armies in Warhammer Armies?

23. At which Polytechnic did GW artist Wayne England obtain his degree?

25. What helped create the smoke effects in the photographs in Warhammer Siege?

If you think you can answer these questions, then email me your answers to orlyggjafnakol@hotmail.com.

In the next round (on-line next Sunday) I shall reveal the incredible prize and the next 25 questions.

Hope to hear from you soon.