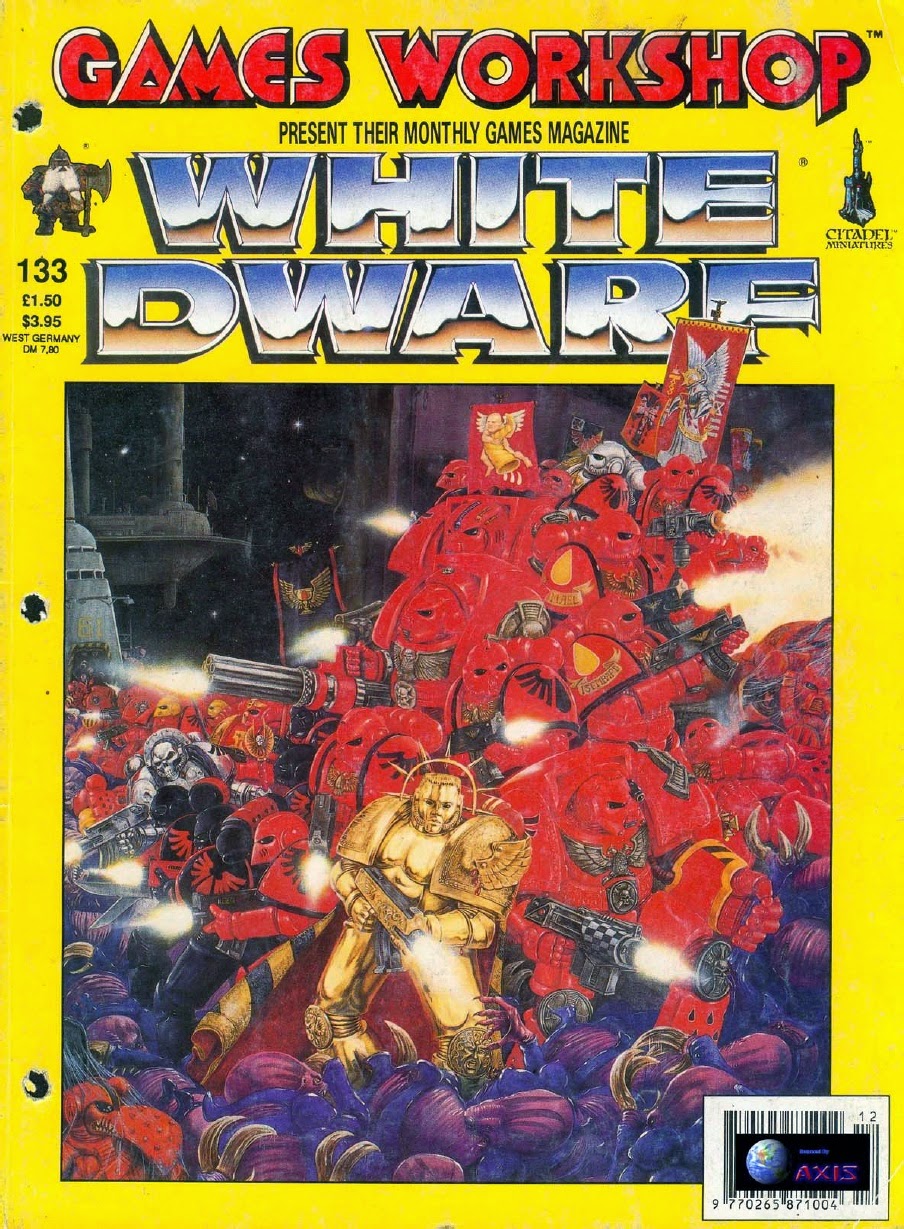 As the festivities of the Christmas period in 1990 drew to their reluctant end, Games Workshop published their regular magazine on a very expecting world. As many of you will remember, White Dwarf was a very needed 'hobby-injection' in a world of print media. Its easy to take access to such material for granted these days (especially when you think there is probably more content published each month online for classic GW games than there was back in 1990) but back then, picking up a copy (or even better, getting your mag in the post) was an exciting event.

For me, I'd grab my copy (as I did with issue 133) and dash up the stairs to my bedroom ready to absorb its contents over an hour or so. My first port of call was always the 'Eavy Metal pages - as they were of course in colour - and I would continue my endless pondering over why my painted miniatures didn't look as good as those in the magazine. 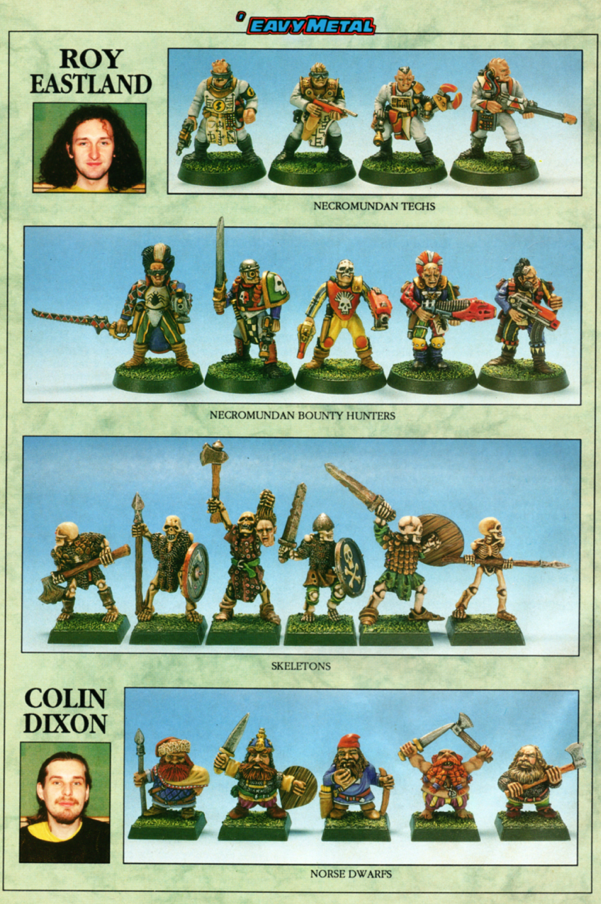 However, this month had a little bit of a surprise in store for the GW fan. After years of collecting and gaming with Warhammer, Heroquest and the like, the sculpting team at Citadel were most definitely household (or should I say classroom?) names in my life. In January 1991 two new masters of the putty emerged: Roy Eastland and Colin Dixon.

Eastland's techs are a fairly so-so group of miniatures with rather static poses - though in their defence, this may well be due to the need to include the plastic arms and weapons of the time. I have never been a huge fan of uniformity in miniature design and these techs seem a little too similar for my painting tastes. I would probably give them a miss if I considered collecting the Confrontation ranges. On the other hand, the bounty hunters are excellent examples of 40k related material in the early 1990s, being varied, ragged cyberpunks! They really do look like the characters seen in the Confrontation artwork realised in lead. I would love some of these, but I suspect that so would many others and getting them for a reasonable price would take some time indeed!

Eastland's skeletons are excellent and are easily some of the finest ever cast up by Citadel. Here there is a great deal more room for variation of pose and this really helps bring the models to life. You see these turn up quite regularly on Facebook with collectors asking if they were part of the GW ranges, most likely because they don't appear in many of the catalogues available online. They are also really well painted and the colours selected convey the skeletal menace of these troops wonderfully.

The dwarfs, though characterful, are not as successful as the skeletons. They are still solid models that will easily stand alongside the numerous others produced in the 1980s, but there is something about them that seems lacking. I really do like the first model (from the left) and the third model as they share an Alpine quality similar to the dwarf skiier we have discussed in the past. 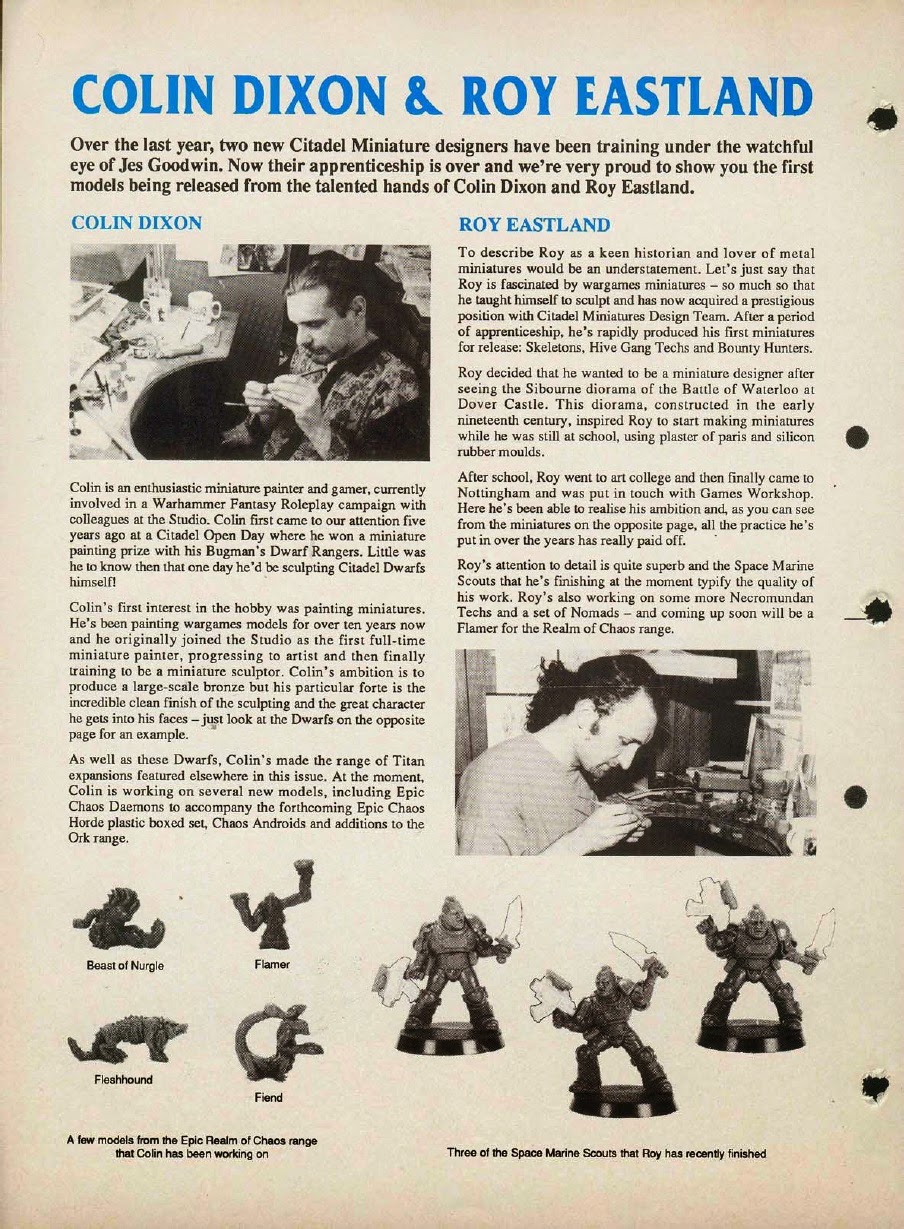 Interestingly, the models were supported with a rather interesting little article about the two sculptors. Colin's biography is probably well known to long term readers of this blog and others that deal with classic GW material. He was the ORIGINAL 'Eavy Metal painter and was first person to be employed by GW to paint full time.  Roy Eastland is a name that doesn't ring any further bells with me, but I think he went on to produce figures for a number of other manufacturers in the 1990s.

If we time travel back to my bedroom of yesteryear, I can recall quite clearly really wanting to get hold of the skeleton models to help bolster my plastic force. Sadly, I never got the opportunity and I don't really recall ever being able to find these models dangling from the blister rack at Wonderworld. I have the beginnings of a twenty-first century undead army on my display case, though its a project I have't worked on for a while, one day I shall and I think I would very much like to include these skeletons in it, perhaps as character models.

Any fans of these models out there?