Its a miracle... I actually had some time to get some painting done. I mean, I first started this Dark Future Vehicle some weeks ago (or was it months?) and by yesterday afternoon it was still very much unfinished. Thankfully, yesterday saw me in possession of several hours or painting time and I finished this car and a Realm of Chaos warrior to boot!

Observant readers may recall a driver sitting inside this car! Well, I was not happy with the finish I achieved so I removed the model for 'dettolling' later on. That left me with the problem of the see through windscreen. A car shouldn't really lack a driver! So I simply painted Blood Red over the plastic and achieved a futuristic windscreen effect instead. 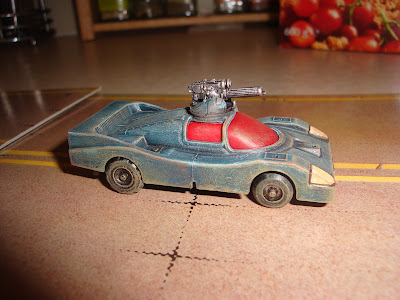 On to the car then. I mixed up a series of blues to get an unusual shade before coating the undercoated model. Washes were then used (using old 80s Citadel inks) to add depth and dirt to the bodywork. Once dry, it was a simple case of drybrushing a series of lighter shades of the base colour over the bodywork to highlight the detail. The wheels and the chaingun were then undercoated in black and drybrushed Miltril Silver before being treated with a few washes of brown and black ink to add depth.

Using a yellow and white mix, I worked up the headlights and shaded with a little black ink around the rims. The rear lights were painted Blood Red and highlighted with straight Golden Yellow. Once dry, I toyed with adding some kind of insignia but decided to leave the vehicle unmarked. This particular Sanctioned Op prefers to remain anonymous! I did, however, have a quick go at writing a number plate. Considering I was rapidly running out of time and I whipped up the series of numbers quite quickly, I am pleased with the results. 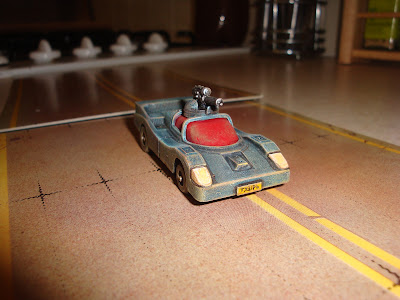 At this point the car resembled a brightly painted toy, rather than a gritty futuristic vehicle. Weathering effects, supplied with a large, flat drybrush, helped bring the model alive and make it look like it has spent some time cruising down the dusty highways of an alternative future USA. I used Bestial and Orc Browns (old school colours) to dirty up the body work, with particular focus around the wheels and the wheel arches. 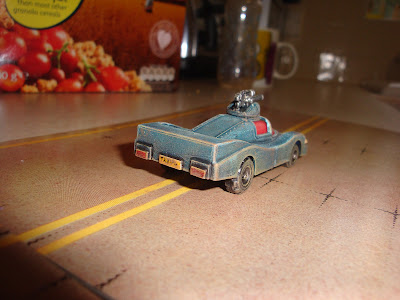 I conclusion, I am satisfied with my test piece. It was a new experience painting a plastic vehicle rather than a metal Citadel figure and the techniques to do vehicles well are different from those you would use on a miniature humanoid. So I need to learn more and let experience be my guide.

I also need to immerse myself in the world of Dark Future and hopefully get some inspiration from there. I haven't even explored the box contents or read the rulebook yet. So my next post should really focus on 'what's in the box'.