Good morning, well its morning here, and welcome to a final stroll through the Chaos army of Edward George Gladdis. As we have seen previously, he has quite a large force made up from models take from the Citadel ranges from the early to mid '80s, with a few later '80s models thrown in too. In this first photograph we have models that fall into that criteria. These are all single piece castings from the mid '80s that didn't make it into the later famous Realm of Chaos ranges. They may not look like the traditional chaos warrior but these models are varied and imaginative even if the sculpting is less precise in places. 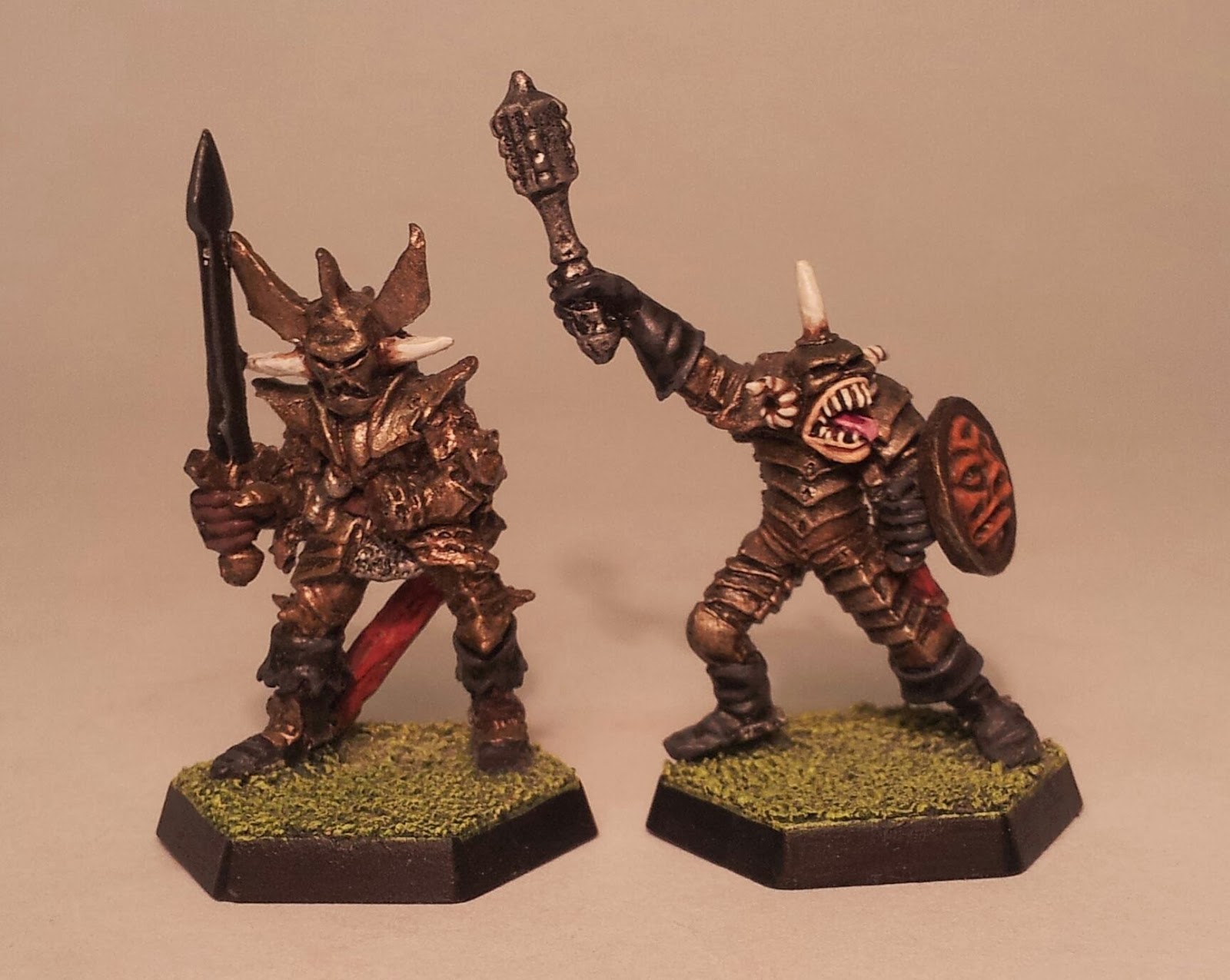 Here we have the on foot versions of the models we discussed in a previous post. In fact, I have really grown to like the idea behind them. One purchase gives you two versions of the same model, one mounted and the other on foot. Its shame that this concept didn't continue as I would love to have some mounted versions of some of the later chaos champions.

Slambo drops in to say hello before getting stuck in with his matching axes. Probably the definitive chaos warrior in my opinion and a fantastic model. The other two chaos warriors in this image are also of note as they are some of the few that suggest a more oriental origin. Chaos samurai on the left and a chaos ninja on the right? These models seem to have a slightly different colour scheme. The metal effects seem much more precise and smooth but are simple enough to match the previous tones. It is worth reminding you here that Edward has been working on this army for some 17 years so some inconsistencies are going to occur. Not that this ever actually matters when models are based and fielded of course. 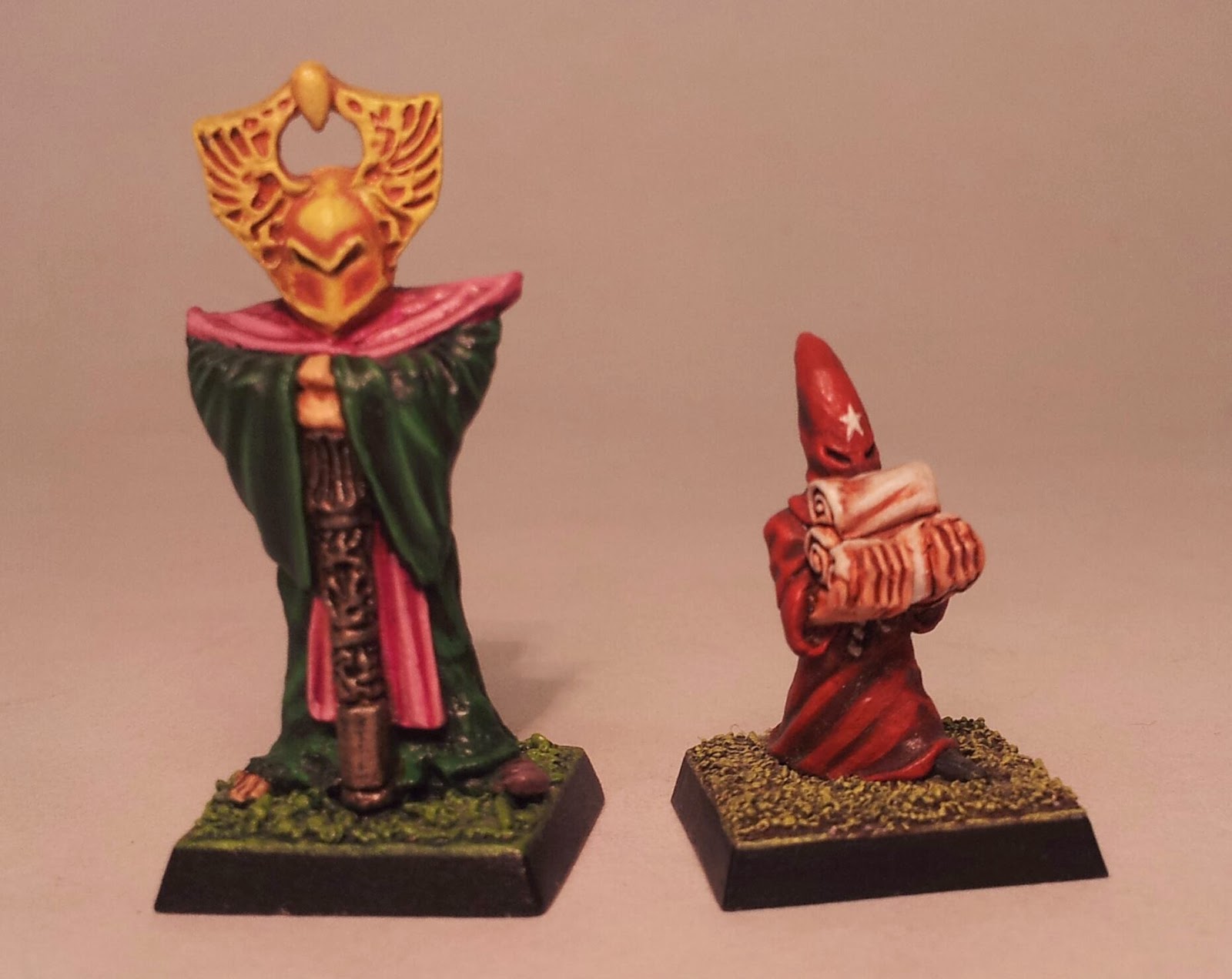 This chaos sorcerer makes a welcome change from all the chaos warriors. He is accompanied on his chaotic travels with one of the more common famous familiars sculpted by Jes Goodwin. Many of these were still available up until recently and are a joy to behold for their imagination and variety. These models are very well executed and I particularly like the green, yellow and pink scheme on the sorcerer himself. Though the red tone on the familiar is very rich and just goes to show what can be achieved with a dark basecoat. The white start on the model's forehead adds super detail that helps bring the smaller model to life. An idea well worth copying in my opinion.

What follows are a series of photographs that show off the chaos warriors in Edward's collection. They are a mixture of slotta and preslotta much like the models we have seen previously. 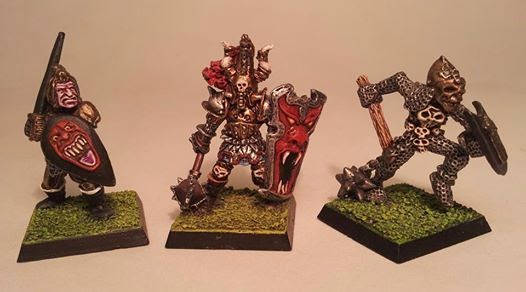 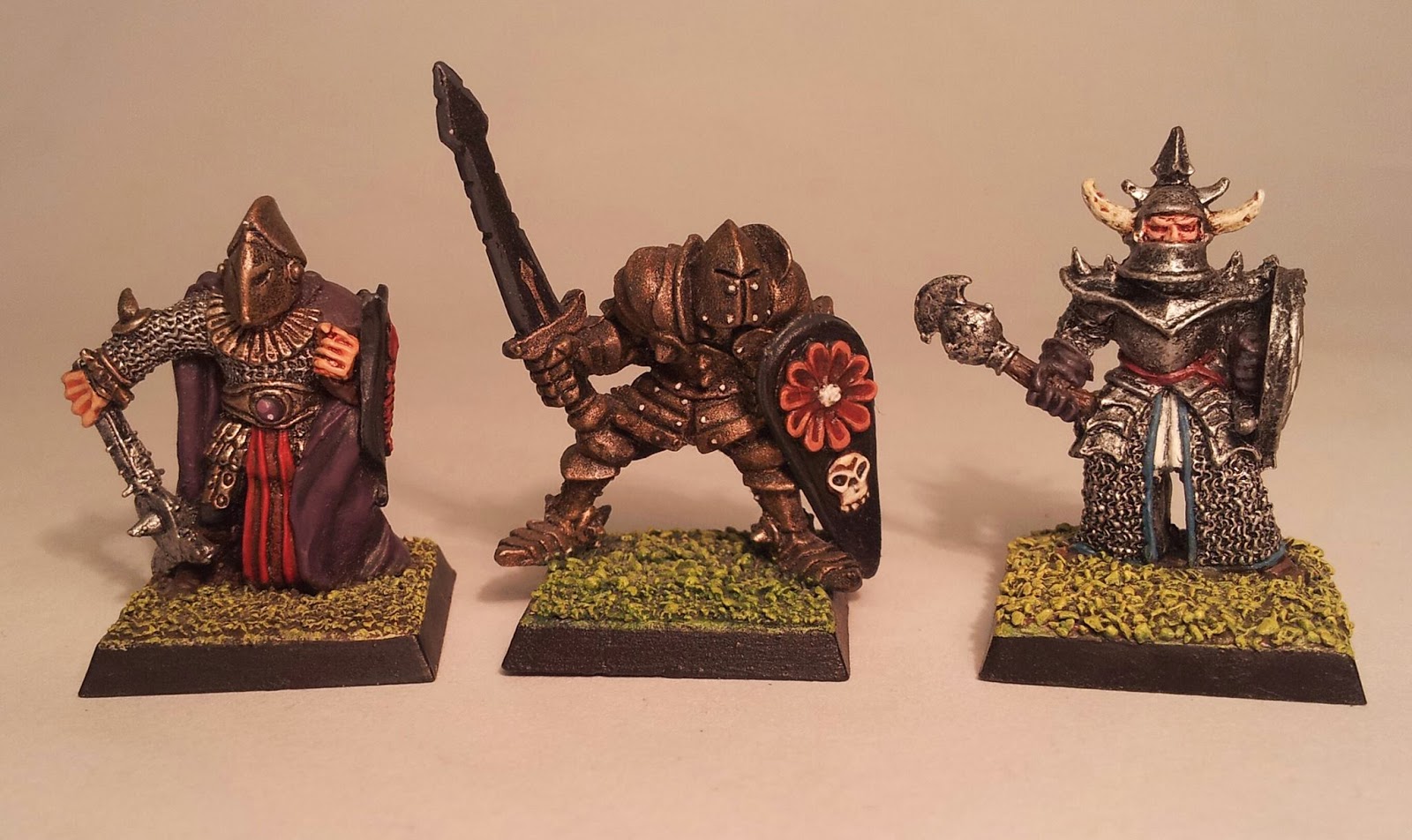 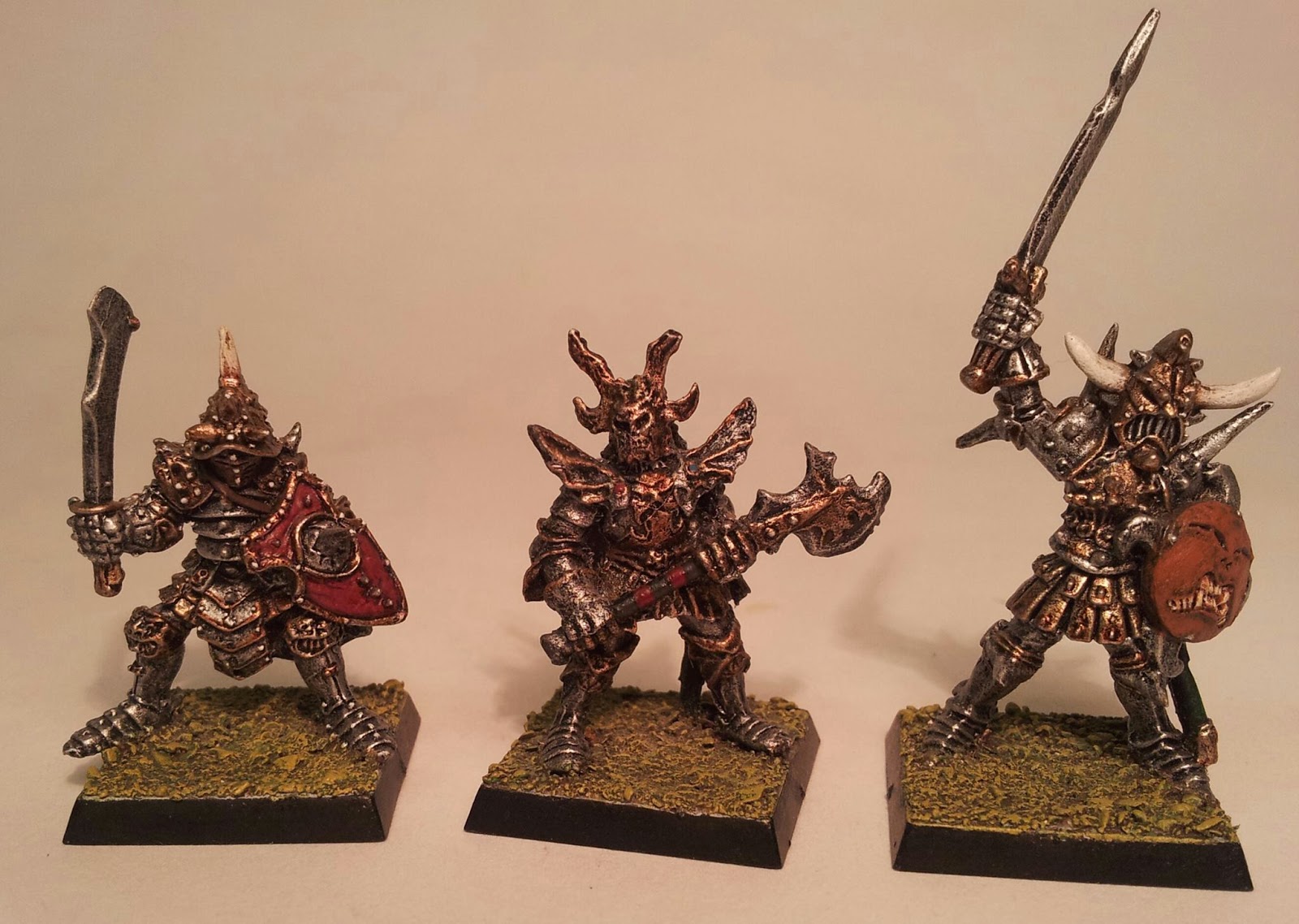 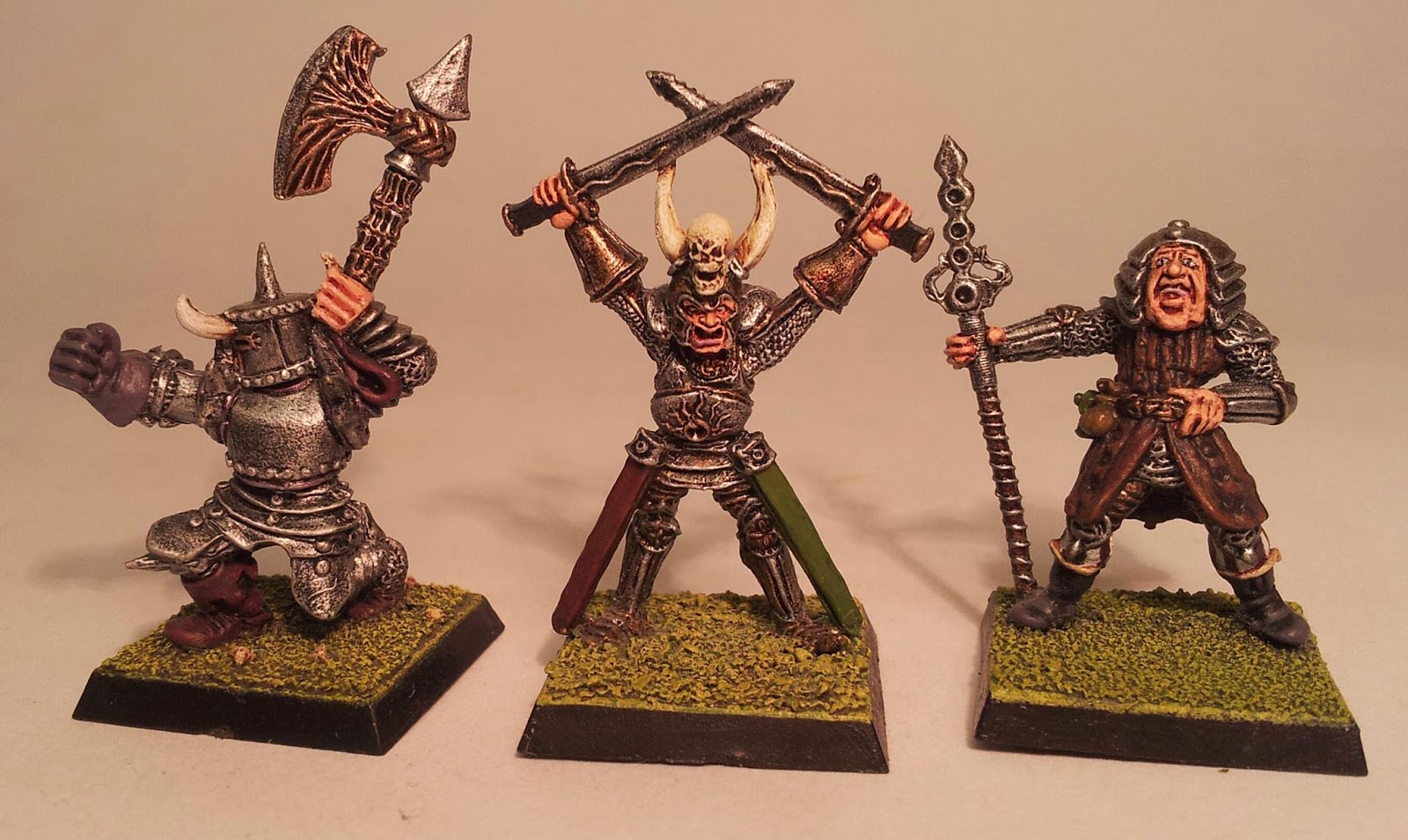 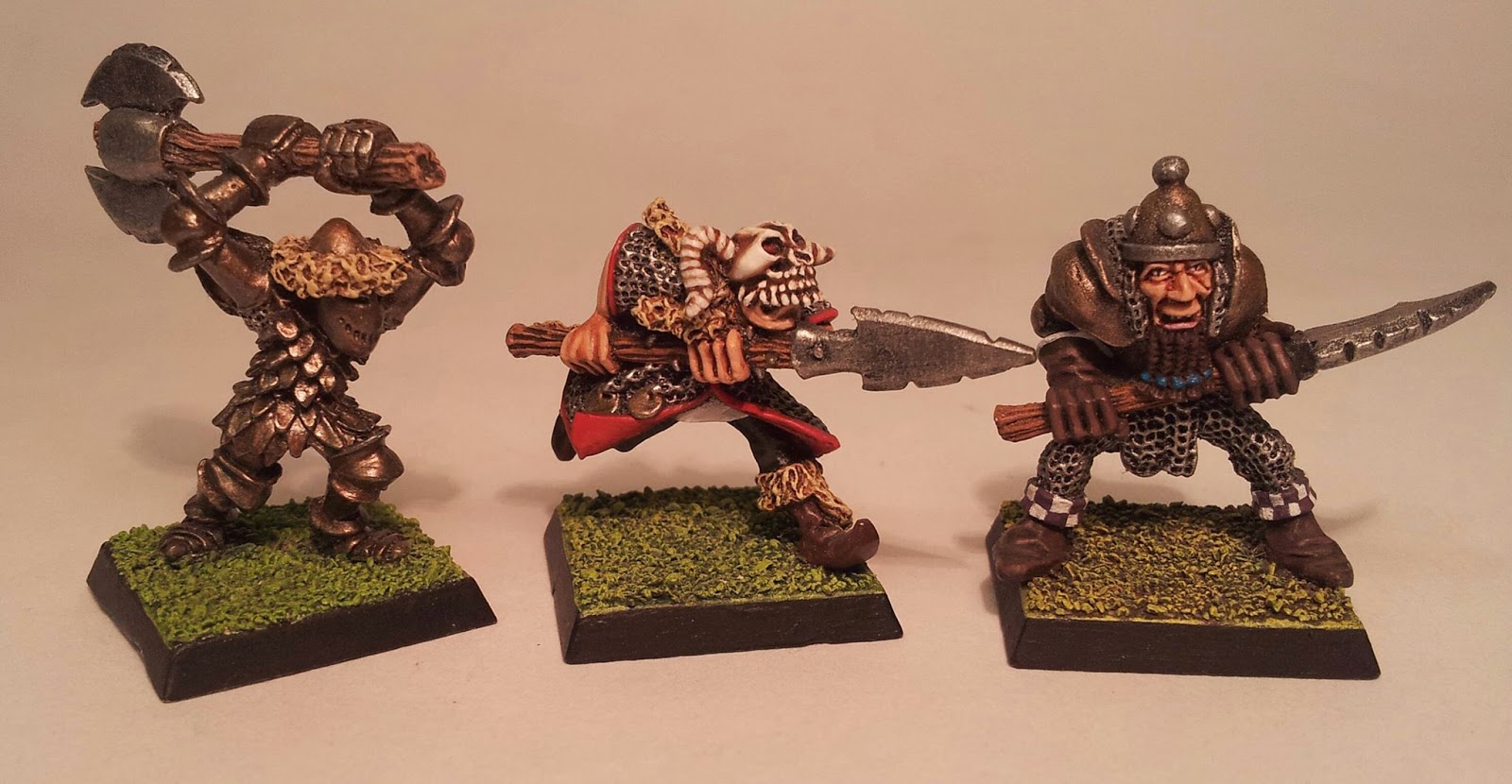 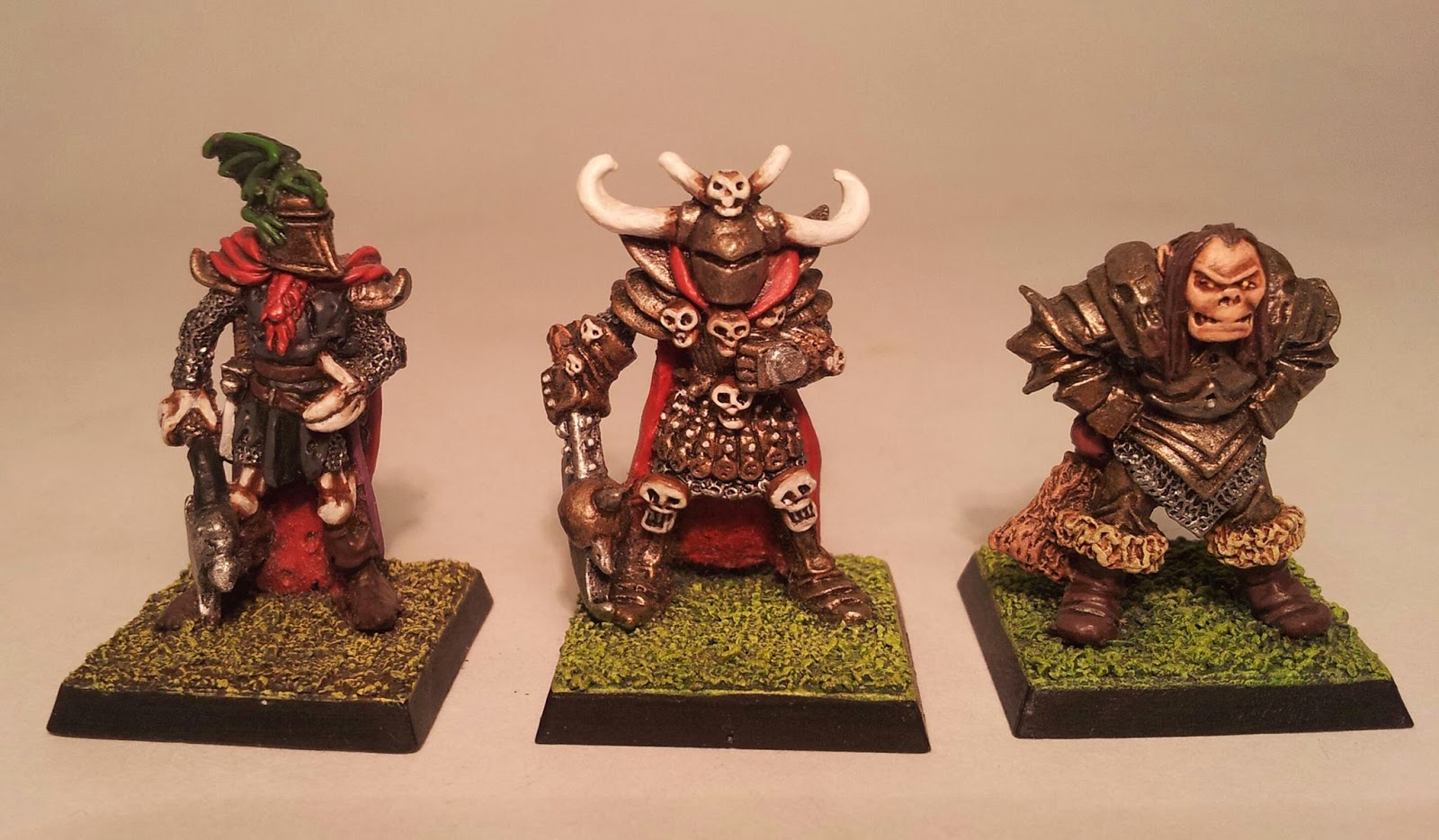 And to finish this review off a final single piece. None other than a Jes Goodwin Chaos Champion from 1987. This is a fantastic model and has really been well presented here. Two motiefs well worth stealing here are the chequers (very John Blanche) and the gorgeous flames on the boots. The yellow face with the pink lips create a good contrast with the red and black of the rest of the model and help draw attention to the facial features of this model. 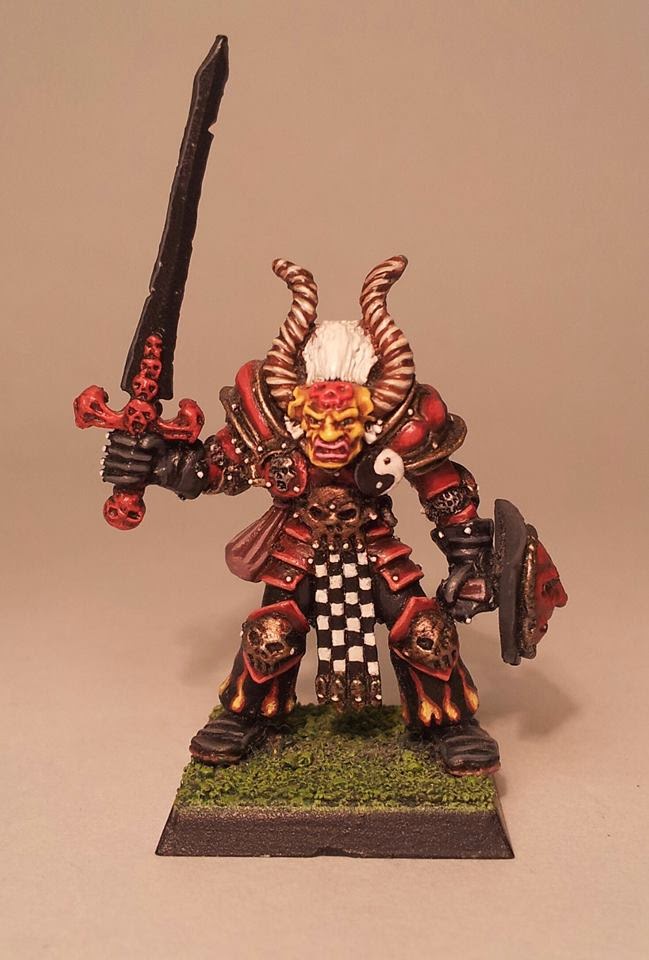 Do you have an old school army that you think we would be interested in seeing? Just let me know and I will gladly share your collection here in a future post.

Big thanks to Edward for taking the time to post up these shots of his collection. i have really enjoyed putting these posts together and have been inspired to try some new ideas in my own work. I hope you dear readers feel the same.