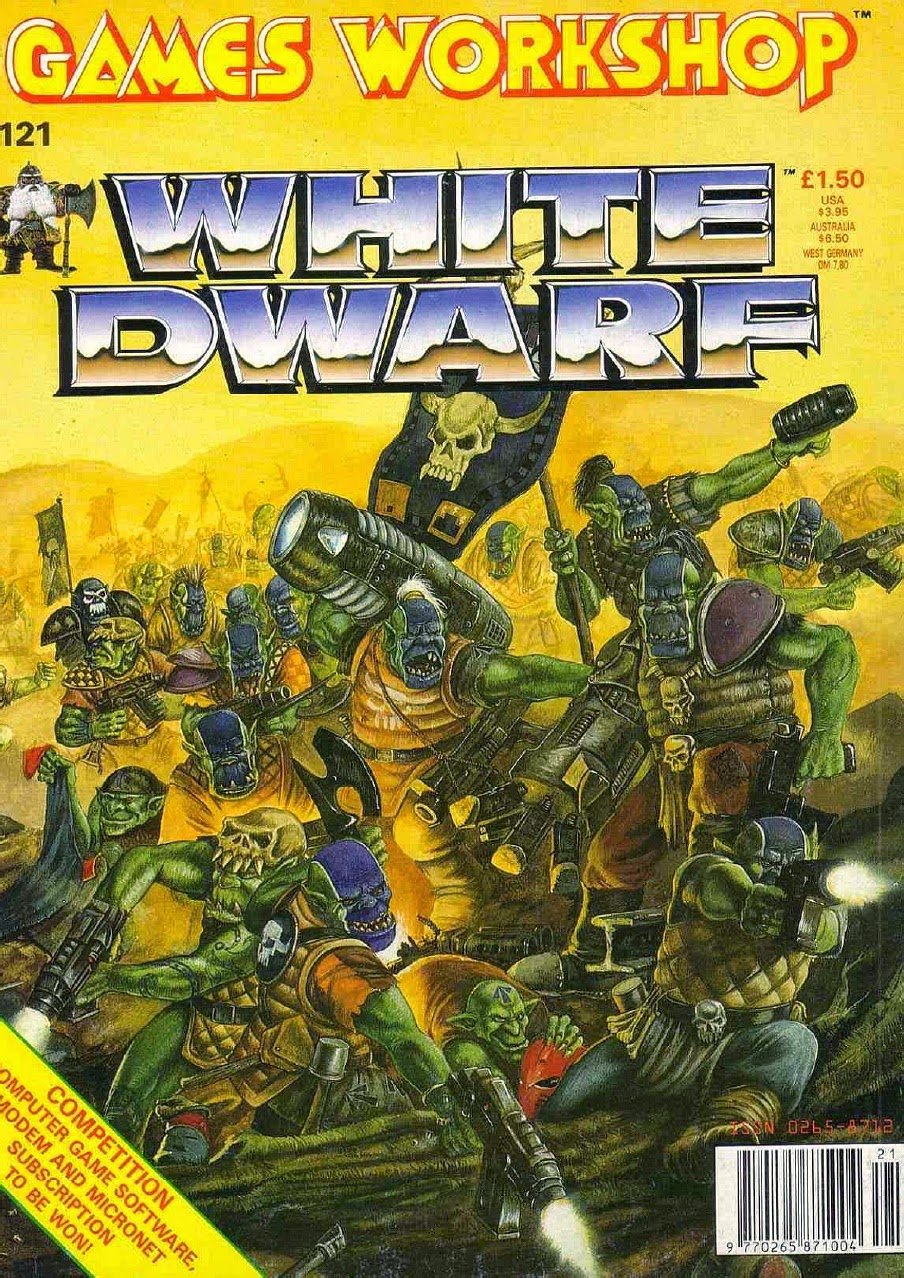 It seems that I spoke to soon above the weather today. My wife and I started a big clear up today, mostly of all the kids' clutter that builds up through the year and we have decided to change the playroom into a grown up room. This means we should have a space that is not riddled with Hot Wheels cars, Lego, Disney Princess or the other bric-a-brac that children seem to sweep in with their wake. Perhaps I'll be able to create myself a little miniature painting area in there at some point. The trouble is, its far too hot now for us to want to finish off the rest of the house and the wife has settled herself down on the sofa with the fan blasting out full blast while my two year old has a nap.

Snatching a few moments away from the big project sees me following up a recent post about 'Eavy Metal with this one. The figures presented in WD 121. There is lots to see so we better press on before I am needed to move some heavy furniture or hoover under a sofa! 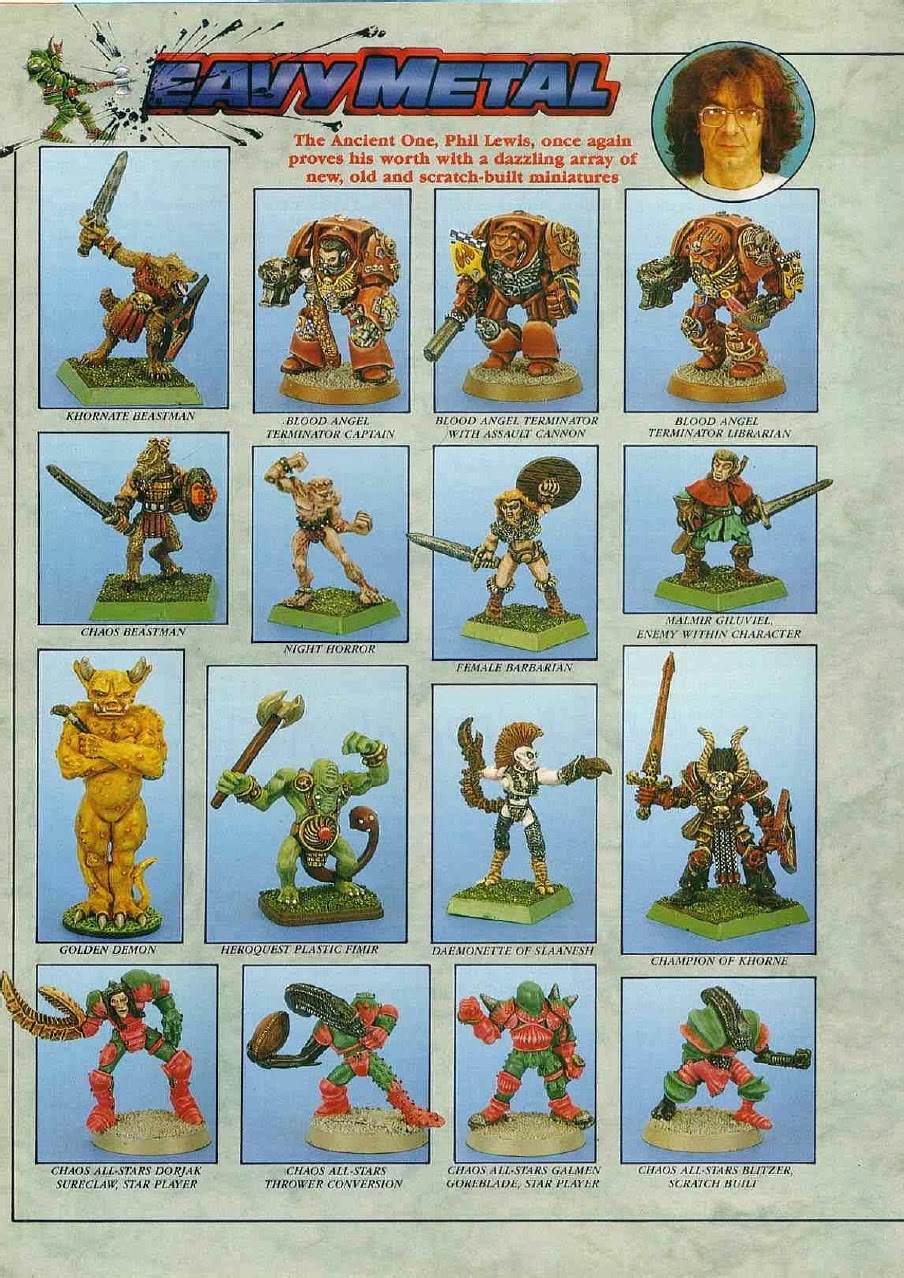 More from Phil Lewis, who I interviewed no so long ago, with some more models from his collection at this point in time. We are presented with a nice range of models too, with a couple of Khornate beastmen and a rather striking female barbarian. Two models from the Death on the Reik range have seen the attentions of Phil's brush, with the Wittgenstein monster and Malmir the elf. There is a return visit from some of the members of the famous Chaos All-Stars models along the bottom, a curious Golden Daemon model and a plastic fimir from Heroquest. Rather eclectic really. Standout pieces are the terminators and these are some of the very best painted examples I have every seen of this classic set. The daemonette is worth a  mention too, for not only with Phil really rather good at capturing the pastel menace of these twisted beings, I am pretty sure that this model is now part of Andy Craig's collection. Perhaps I just dreamt it, but I am pretty sure he once shared a photograph of this model stating that Phil gave it to him at once point. 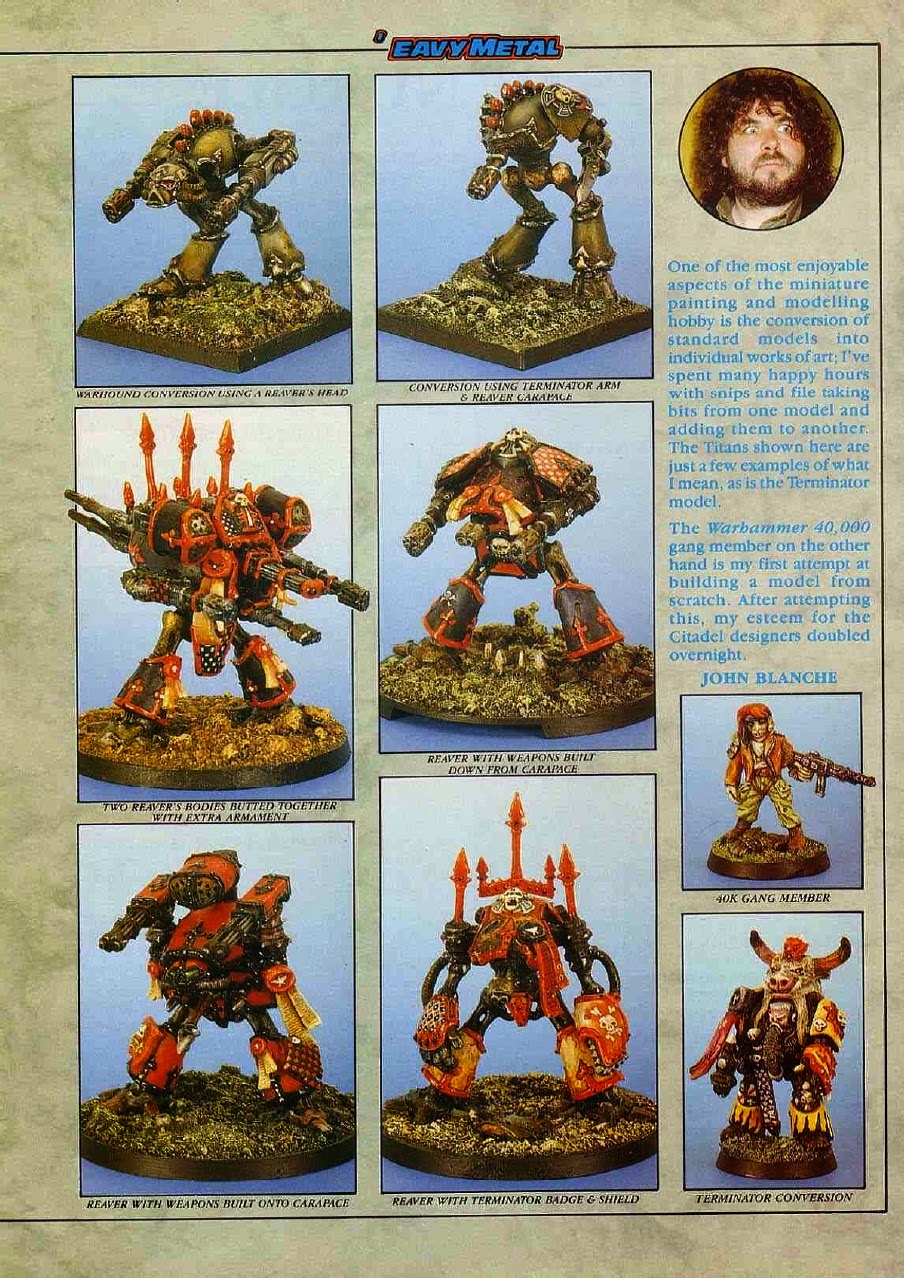 Here is a rare treat, a set of converted figures from John Blanche himself. The titans all look suitably impressive but it is the two smaller models that really capture the interest of the Citadel historian. For here we have a gang member that was the result of John Blanche's first attempt to scratch build a miniature and as you can imagine, it looks just like one of the characters from his artworks has just stepped into the realm of three dimensions. Finally, that terminator conversion is just brilliant! I really like the bases on these models as they seem a little more raised than simple sand coverings allow and I wonder how they were done. Polyfilla? Milliput? Both these materials were popular back then in WD articles and could have been used to achieve these great effects. I wonder if you build an irregular base up with polyfilla and cover it in fine sand if you will get a similar result. Something for someone to try, perhaps? 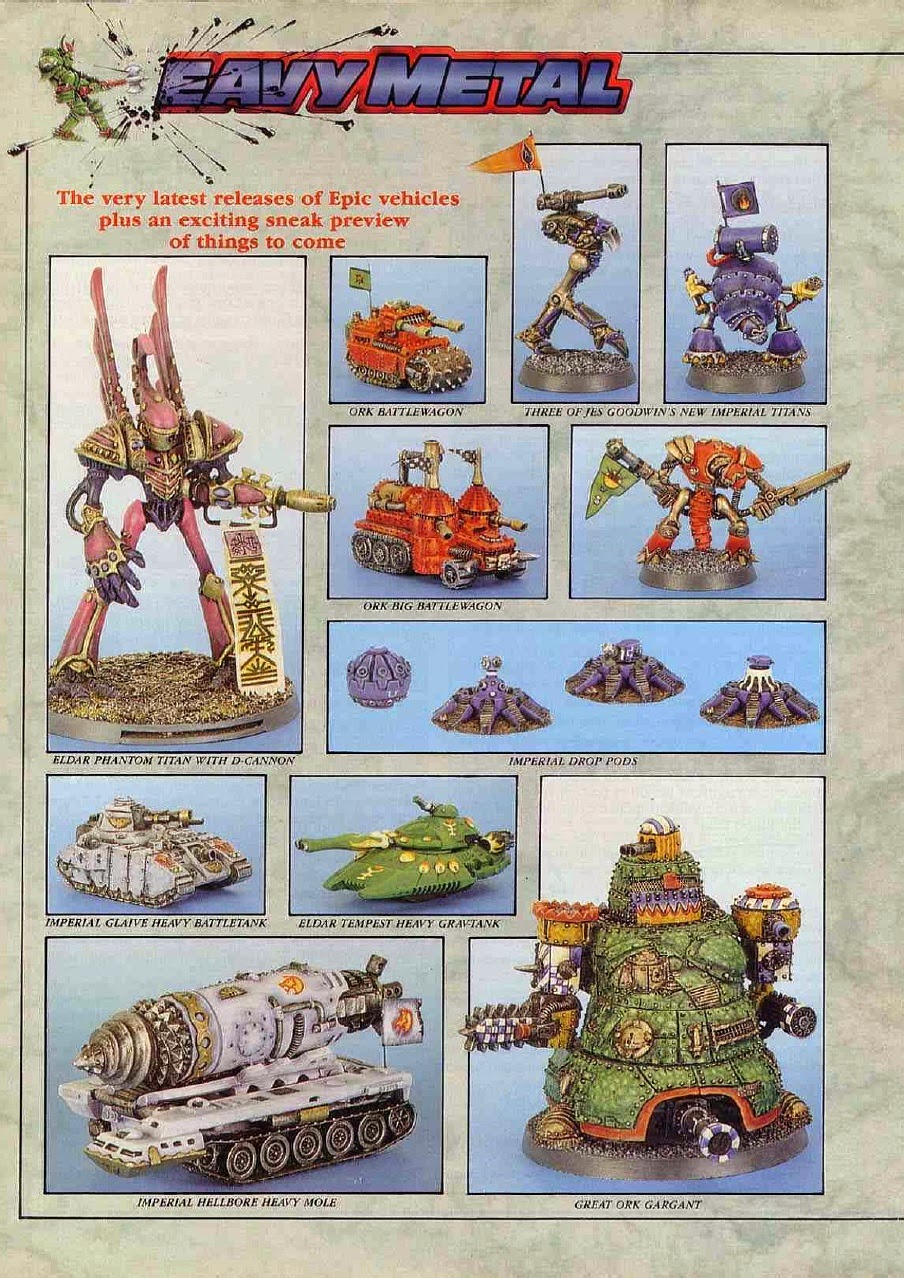 With the release of Space Marine there was a need to come up with loads of Epic scale models for the Imperial forces, as well as their erstwhile enemies. The system produced much of the Horus Heresy background is something I would like and collect and game with at some point in the future. I have got all those fantasy armies to paint up first though! A quick glance through this page lets you realised how varied the Epic game was at this time, with all kinds of crazy ideas developed for it. Many of these ideas are now being produced in 28mm scale. 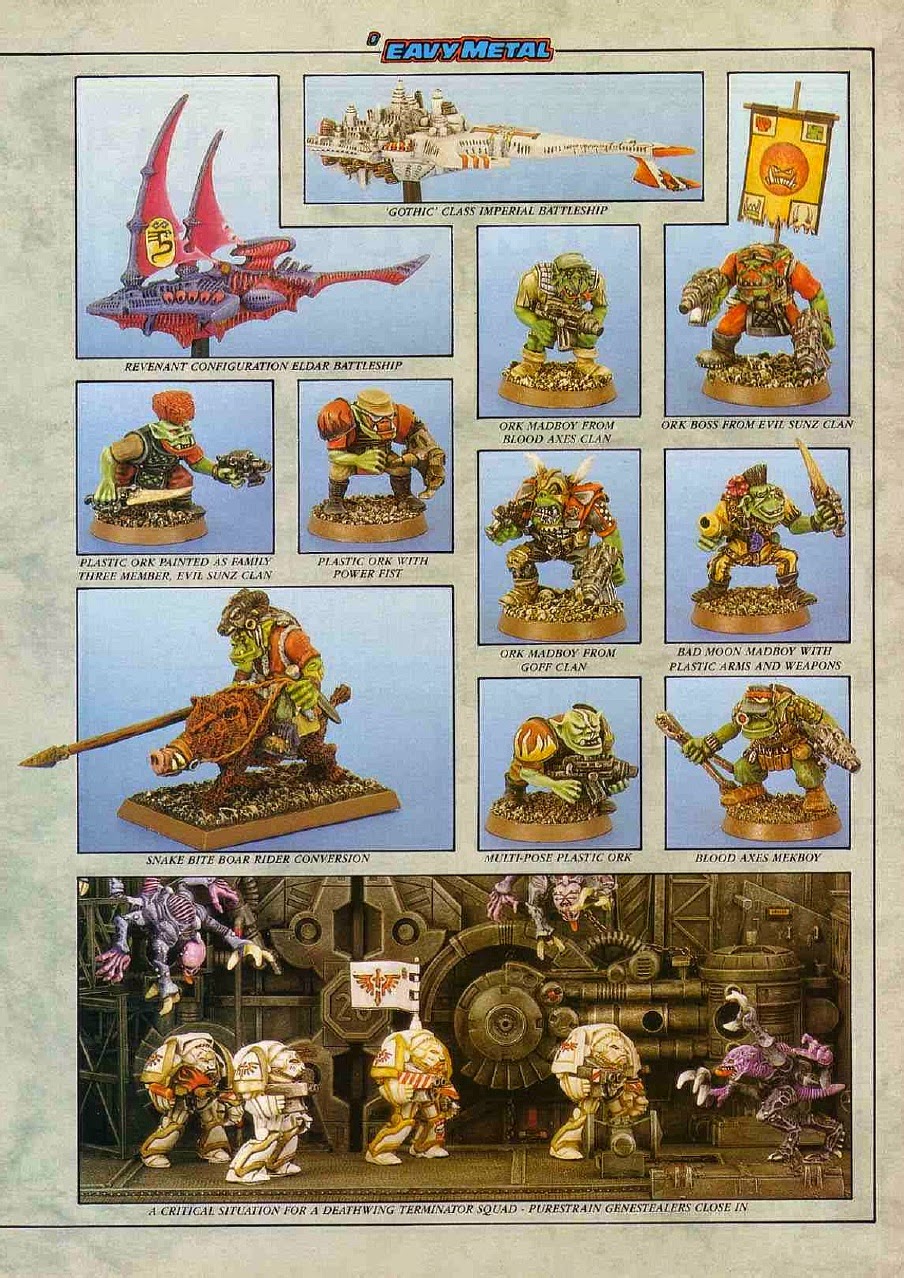 The final page has the ubiquitous orks. With the first of three books on the subject around the corner it was no surprise that each month had its quota of greenskins to show off. You can see the influence of the 'Red Period' growing once more in their colour schemes. The Space Fleet ships are a rarity in White Dwarf and models from this game, which eventually became Battlefleet Gothic, are interesting. I really don't know much about them and I cannot think of a blogger who collects them either. Something for the future perhaps? A lovely Space Hulk diorama finishes off the page, and I always wondered how they made the backgrounds for these. Bits of olf plastic? Toys? Junk from the bitz box?