The Malignancy of Malal: Creating colour schemes for the 'Lost Chaos God'

Remember when I waxed lyrical about Oldhammer Miniatures? If you cannot quite remember have a look at this post here. I waffled on about the prospect of creating Oldhammer inspired miniatures. It all seemed just a pipe dream back then, but someone has only gone and done it!

By now, I am sure that many of you are aware that George Fairlamb has produced a miniature inspired by Anthony Ackland's unused Malal concept. Perhaps some of you have even gone as far as buying yourself a copy (or five, like me) of the miniature. I was very excited to find that the models had arrived early on Friday morning and that I would get the chance to fiddle around with the sculpt and get the model painted over the weekend. This post will chronicle my efforts to get the model from the commercial plastic pouch and on to the gaming table. I can do a fair bit of this myself, but I am hoping that you, dear readers, can help contribute to the gaming side, namely 'the rules and fluff', but more of that later.

Lets have a look at what I received from CP Models.
﻿ 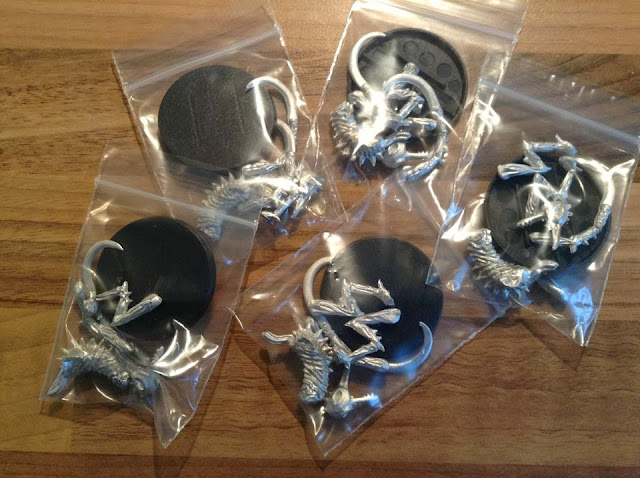 There we have five very well cast and packaged hooked horrors. As you can see, they arrive with circular bases but I intend to base mine using 25mm squares, so they can fit in more easily with my RoC stuff. Dispensing with the packaging materials, this is what you end up with... 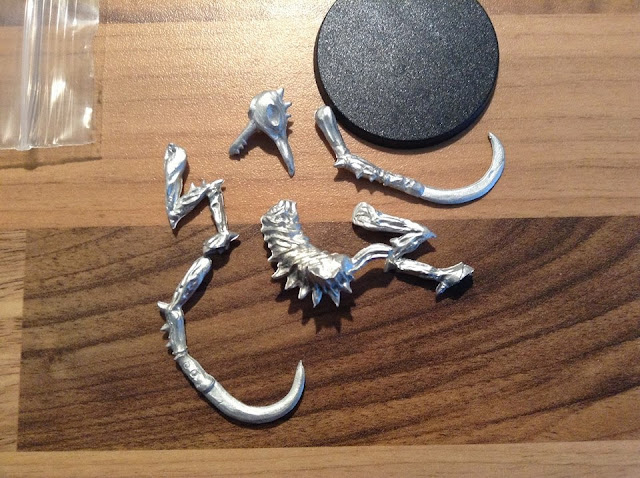 The miniatures are cast in a crisp white metal and hold detail very well. I was impressed with the lack of flash and only had very minor mould lines to contend with. Five minutes of idle filing later and they were a thing of the past. Putting the creature together was a little more challenging though, as you will no doubt see when you get your hands on these. Not that it bothered me much, as I can remember the days when such problems were the norm for multi-part metal models. I think that it is very easy to become complacent about the modelling side of things after dealing with one to many CAD products, after all, you just get used to things fitting together. Here, I had to file down the inside of the arms and legs and attach pins. This gave the limbs the support I was looking for as well as allowing me to position the arms a little more carefully. I had a go at forcibly bending the metal in places, and though the parts made a strange cracking noise, nothing snapped or became weak. When I was reasonably happy with the positioning of the first model ( and I didn't have very long thanks to the needs of son/daughter/wife combined) I undercoated the model in black.

I opted for a black and white colour scheme, to match the background of Malal. Only, I wanted to try out something a little different in the painting. Re-reading Andy Craig's great article about painting (check it out if you haven't already) I decided on using blue to highlight black. So I worked up the raised areas of the body using Chaos Black and old school Enchanted Blue. I dipped a little of the bone colour in for the final highlight. The hooves, hooks and head were painted with a mix of Bleached Bone and Enchanted Blue. As you can imagine, I only used a very little amount of the blue in the mix, and added even less black, but  was happy with the colour harmony effect and promptly worked up the bone bits until the final highlight was pure white. The base was completed in my usual super quick way.

Here are the results, and apologies for the poor lighting. What do you guys think then? Any comments or ideas about the colour scheme. 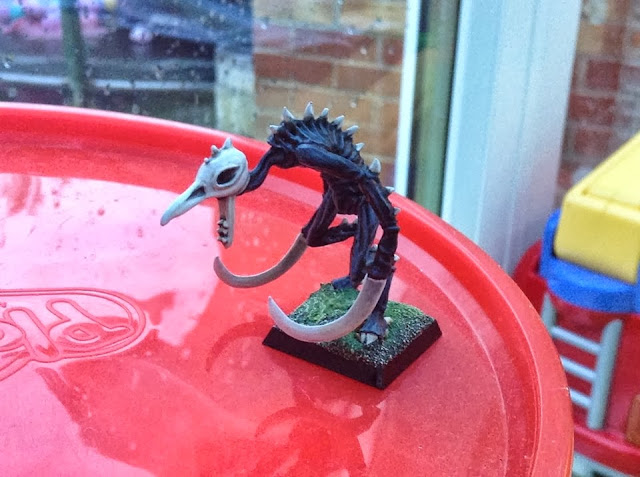 Now, if you are wondering about scale, as indeed were a number of members of the Oldhammer Community Facebook page, cast your eye over this next photograph. Now, there has been some debate over what the actual image by Tony Ackland actually shows - beast or lesser daemon? For me, the model is best used as a lesser daemon, largely because between them, the lesser and the greater daemons are more useful in game terms. As an aside, I am trying to convince George to bang out the Greater Daemon to Tony's design in the near future, so fingers crossed there. 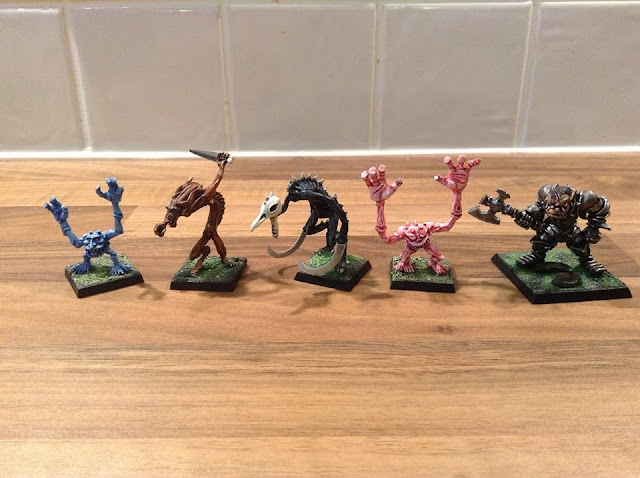 Here's the hooked horror alongside some other contemporary models from the Realm of Chaos releases, and oh, another follower of Malal too! Can you spot him? As you can see, George's model fits in perfectly and will no doubt, just like many of the daemons before it, prove to be an absolute nightmare to rank up!

I am really proud of the model as it is, for all terms and purposes, the 'first' Oldhammer miniature. Why do I think this you may ask? Well, it was the Oldhammer Community that reached out to Tony Ackland in the first place, he agreed to share his unpublished work with us; that work was enjoyed by many thousands of enthusiasts amd one of which was inspired enough to have a crack and producing a model.

And here it is!

So what are your thoughts then? Any sage advice or opinions about the painted miniature? Would you have done anything differently?