As you may have read, this week is half term and I plan to use my time wisely when it comes to getting miniatures painted. Some weeks back I entered one of the brilliant competitions, or challenges, over on the Oldhammer Forum for the month of October. The theme was 'Halloween' and so I chose The Nightmare Legion.

Now the Nightmare Legion has had a special place in my wargaming heart for over twenty-five years. Why? Well it was the first box set that my father ever bought me, from Wonderworld in Bournemouth to be precise, back in 1988. I can recall him undercoating the miniatures in black for me, but the lure of other lead resulted in the models never being finished back in the day. Still, I didn't give up on them, and down the years I had repeated cracks at painting the legion but I never got further than a couple of models. It didn't matter what I had painted, when I saw my father he would ask 'have you painted the legion yet?' and, to be honest, it has become a bit of a standing joke.

But no more! For the Nightmare Legion are finished once and for all. Here they are in all their glory! 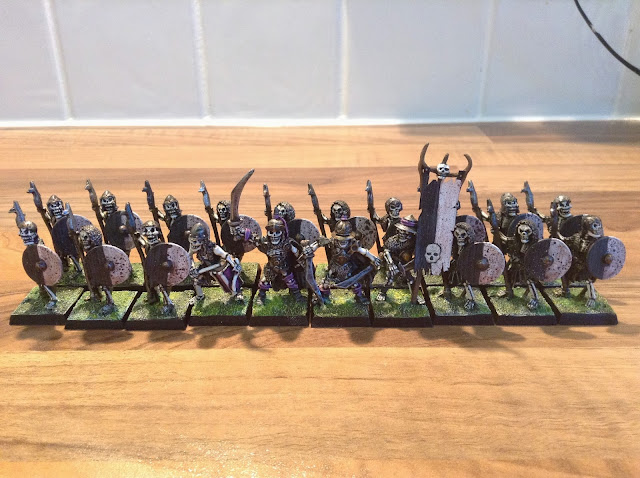 I went for a black, white and purple colour scheme as it was in keeping with the rest of my painted undead. I have also just finished a Khornate army, and the though of painting much red for a while did me the world of good. The simple colour scheme allowed me to batch paint these models quite quickly, and the sheer scale of the job saw me using several speed painting techniques. Sure, they was a loss of finish compared to my chaos stuff, but now that the models are all finished, I don't think you can tell. Can you? 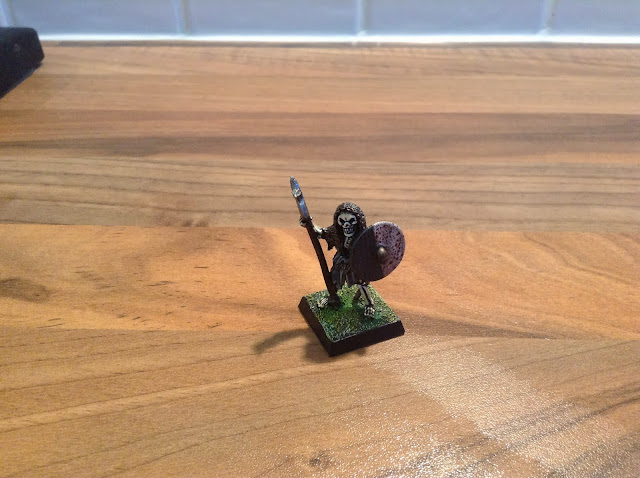 The colour scheme for the basic trooper was simple. Bleached Bone/White for the bone, black for the clothing, highlighted in grey and brown and gold for the equipment. I used drybrushing and ink washes for most of the model, only using layering for the bone itself and edge highlighting for the clothing. Black ink became my best friend in ensuring that enough depth was created within the bones of the troopers and I even went as far as painting on the individual toe bones for the front rank models! The shields are not Citadel, but converted Gripping Beast plastics with the centre hollowed out to fit the boss. These were painted black and white, highlighted with grey and then washed with a muddy red ink wash to simulate the aeons of mud that would no doubt encrust a walking skeleton. I use a stippling brush to flick on red, brown and grey paint flecks, again to simulate age. 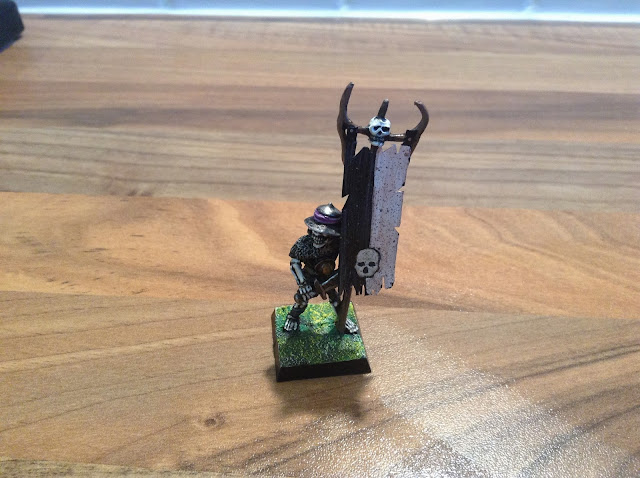 For the command figures, I added gold to the armour and purple as an additional colour to the clothing scraps. Originally, I had gone for red (perhaps out of habit) but was not happy with the finished result. Fifteen minutes work was enough to remove this and replace with a nice regal Worm Purple. The banner is made from standard A4 paper, with the sign drawn on before hand. I used exactly the same technique as I did with the shields, only I added a skull symbol down the bottom and two silver dots to suggest nails at the top. 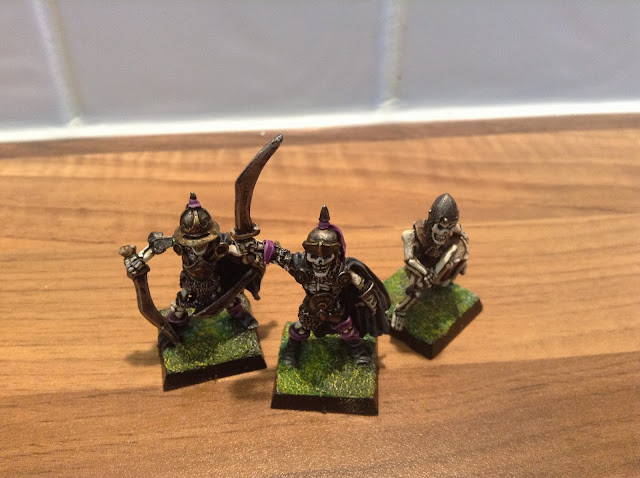 The bases were done my usual way, as I recently explained in this tutorial, and believe it or not, took only half an hour or so to complete, for the whole unit! I spent a little longer on the command figures, adding the purple as I said, and highlighting the armour a further stage than the rest of the troopers. 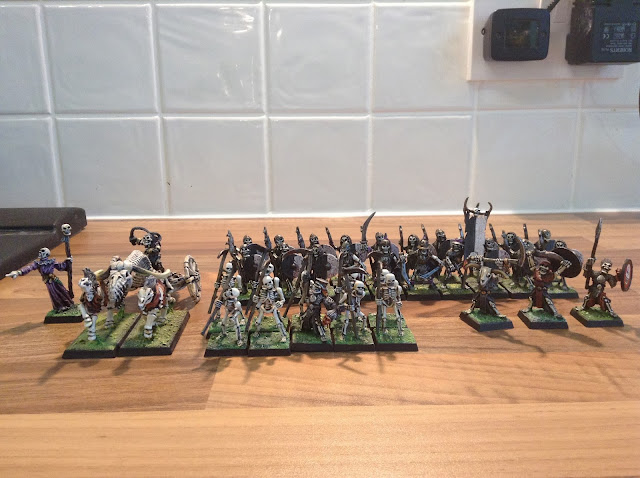 And here we see the beginnings of my Old School Warhammer Third Edition Undead army. Its early days, but there is a small force her for simple engagements, and minus the Liche, these models will be used as allies for my Khorne army at Blog-Con. I am hoping to be able to recruit a 'second in command' (underling) on the day to help me fight off whatever Warlord Paul feels I need to be fighting off.

Anyway, that is enough waffle for know. I am off to post these on the Oldhammer Forum (and my Dad's Facebook page) beforing tidying my desk up for the next project. With lots of holiday left, I plan to do something totally different next.

So what this space!