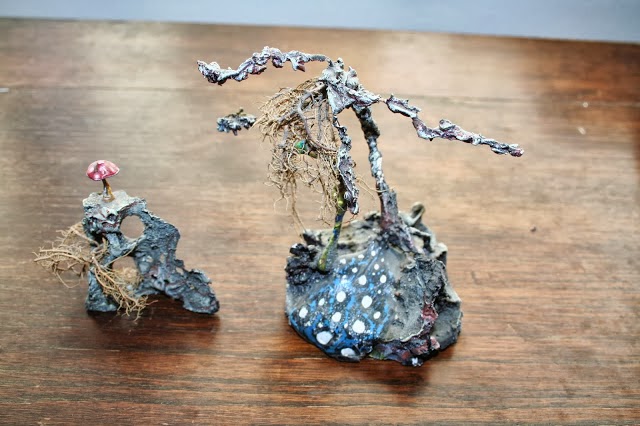 We celebrated the 25th Anniversary of Slaves to Darkness with a fairly large Realm of Chaos Warband game at the Wargames Foundry, under the generous gaze of Bryan Ansell himself. It was pleasing to the Dark Gods that so few lovingly painted miniatures fell on the tabletop and carnage has long been their pleasure.

Sadly, we have learnt that the carnage did not stop in the game world, and much of the 80's classics were destroyed when the 80's Design Studio was moved circa 1991. Incredibly, thanks to one Evo Von Himmel we have the chance to glimpse at some of the scenery made for the Realms of Chaos books but rarely actually seen. Here we can present some 'Chaos Trees' constructed by Jamie Sims in the style of John Blanche.

You can just make them out in the picture below.

Looking at them, they are surprisingly 'un-Warhammery', if such a thing is possible, though they have much in common with the early 1980s John Blanche figures that are now safely stored in the collection of Steve Casey. I am sitting here as I type trying to work out how these were made. Its hard to tell, and please do comment if you know better than I, but I feel that that the scenery is built from a mixture of wire and mod roc/paper machie. No matter the materials used, the scenery has a twisted, ethereal feel that is wonderfully evocative of the Realm of Chaos before it became a rather generic wasteland.

When I finally get around to building my wargames table, a set of pieces in the style of these survivors is going to be a must!

If you are interested in reading more about these pieces and won't to know how Evo came to own these, read the blog post below.

One question remains though! Who has the others?