Oldhammer Returns to The Foundry: Blog-Con

The image above says it all. There is going to be an event at the Foundry for Wargames bloggers by Wargames bloggers. I hope to attend, if just to soak in the relaxed and friendly atmosphere that abides there. Though not a Oldhammer event like the Weekender, the spirit is much the same. A load of gamers, getting on with gaming and sharing an interest in painted toy soldiers.

There are plans afoot to play a game of Warhammer Third Edition at the event, one that focuses on narrative rather than a 'line them up and knock them down' approach. Warlord Paul intends to create the scenario and GM the game (and having witness his style over a Realm of Chaos warbands game) I can tell you in advance that it will be great fun. Oldhammer stalwarts Thantants, Steve Casey and others also hope to be at the event.

The general theme of the game is a clash between Chaos and the Undead but I don't know many details, but I hope this post gets things rolling in that direction! I really want to field my Old School Khorne Army in full during this game, complete with the chariot I discussed recently but I also intend to field some undead troops for the other side (if needed). This will consist of a fully painted Nightmare legion, if I get the skellies finished in time, as well as a miniature of rather large proportions.

It has been quite some time since I posted anything I've painted. This is because I actually haven't painted much recently! I have got plenty of things started as my painting area shows. Here is what I have on the go at the moment. 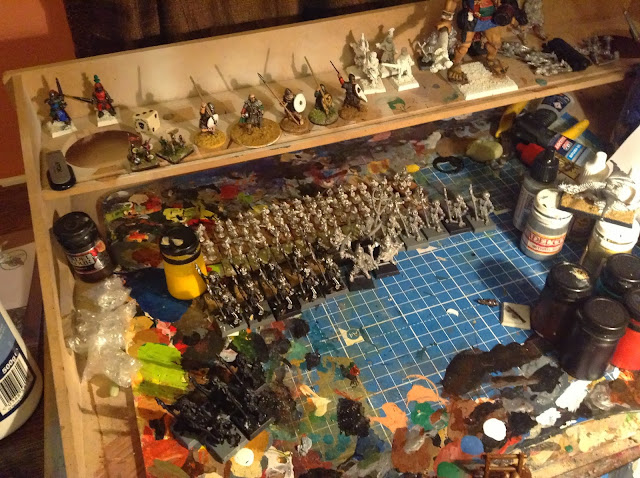 Amongst the mess, you should be able to make out Gripping Beast Anglo-Saxons, Pendraken 10mm Saxons, Foundry Feudal Knights, a Citadel Young Green Dragon, the Marauder Giant and the Nightmare Legion. These are just some of the things I have been working on, and the legion and the giant I hope to be taking to Blog-Con 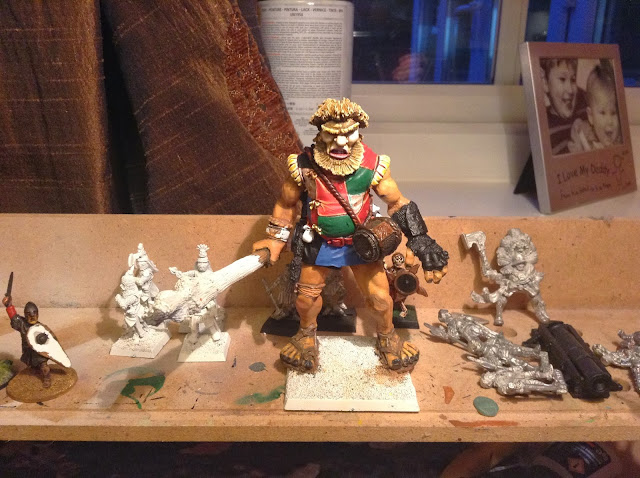 The giant is a wonderful model. Its so well sculpted and cast that it fits together like a dream, with the minimal of greenstuffing required.In painting it I have gone for the traditional chequered tunic design, in homage largely to the original paintjob. 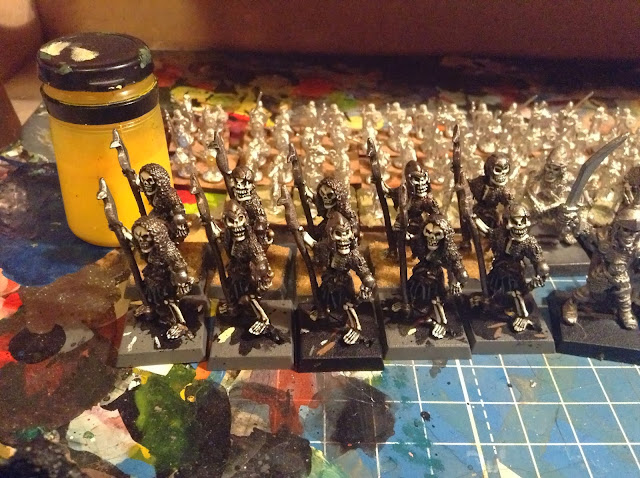 The Nightmare Legion were one of the first sets I was ever bought by my dad, and these are the original models. I must have tried painting these loads of times but have never managed to complete the regiment for one reason or another. But nothing focuses the brush like an impending game, so hopefully these guys will be seen across the Foundry tables next month. 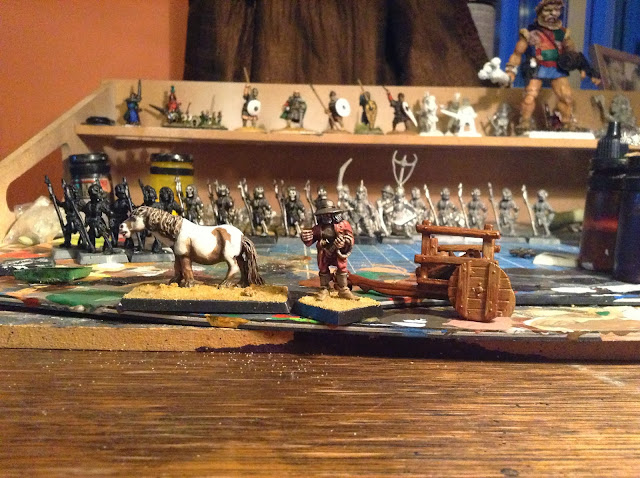 One of the joys of collecting Old School Citadel are the many quirky models you can lay your hands on. Here we have the Muleskinner, Trigger and the Adventurer's Cart. I started these back in June but life just hasn't provided the time I'd like to get stuff painted.

So that is what is on the work bench and may or may not be seen at the upcoming event at the Wargames Foundry. Do you plan to attend? Are you interested in joining in on our Third Edition game? If so, just drop me a line or comment below.