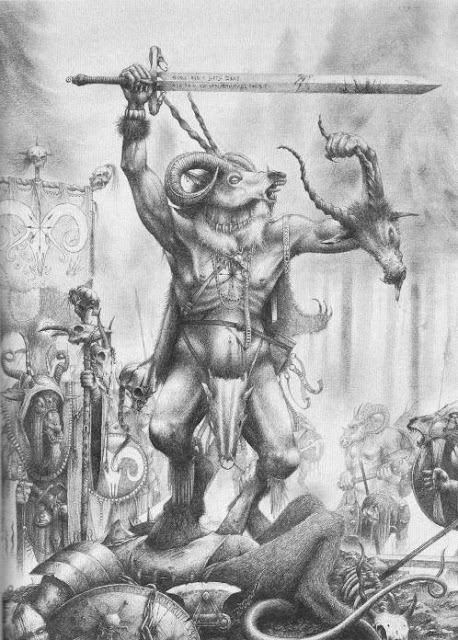 One of the best things about attending an event like the Oldhammer Weekend are the stories. By this I mean the tales of fellow gamers, of their struggles and triumphs, of their mishaps and mistakes. This is also true of the authors of the game and its background. I was lucky enough to be introduced to John Stallard and Rick Priestley by Diane Ansell, and among the many far flung conversations was this little gem.

Rick told us about a picture by Adrian Smith that had caused a problem or two during the publication of The Lost and the Damned. Flicking through a copy (and there were heaped about the Foundry) he pointed out the image, but didn't enlighten us to the meaning of the inscription.

Well, let's have a look at it.

Now, the inscription on the beastman's blade will mean little if you don't have access to the Dark Tongue. So here is a little iPad snap of said page page below.

With this in hand I set about trying to translate the inscription on the blade itself. My efforts are presented below. Now, I am unsure of the first word. It may well be MARS, but the final rune is flipped on its head. The rest were straight forwards until I reached the eleventh word, which either by accident or design is much harder to decipher. With a little squinting its possible. My attempt is below. I wonder if you all agree?