As you may know, we have reached White Dwarf 114 in our journey through Warhammer Third Edition. Its been quite a trip so far, hasn't it? Where did we start? Issue 93 I think, so that is 21 White Dwarfs later, or nearly two years of product life. All of the major supplements have been released, save the delayed Lost and the Damned but in the coming months there would be a series of large scale 'Warhammer' spin offs to hit the market, inlcuding the genre defining Heroquest!
Issue 114 of White Dwarf contains a few randon adverts that are probably well worth a mention here on Realm of Chaos 80s. The first of these are the second month of releases of Marauder miniatures. The Morrisons produced a range of Dark Elves that certainly shared some of the characterists of those sculpted by Bob Naismith but have a far chunkier feel. As with the previous month's releases, I have softened to these, though I have yet to consider collecting Marauder in any series way as I do with Citadel. I certainly intend to do so in the future.
What to you readers feel about this small set of miniatures? Are they marmite models or something that you treasure and intend to field in some future, but not to far off, Warhammer battle?

A while back I posted a brillaint Warhammer Third Edition ad that showed much of the range as it stood in the later '80s. Well this issue of also included a Rogue Trader: Warhammer 40,000 version of the same advert. I love this ad, largely due to all the old school box covers that are shown, not to mention the little seen plastic craters that were released around this time. See if you can spot them while you are enjoying the old school 40k! 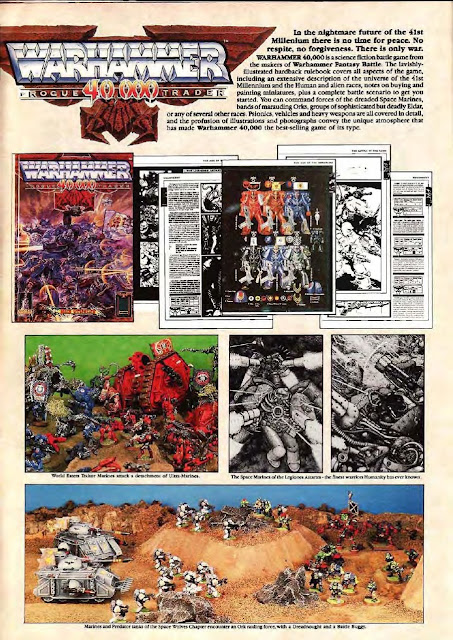 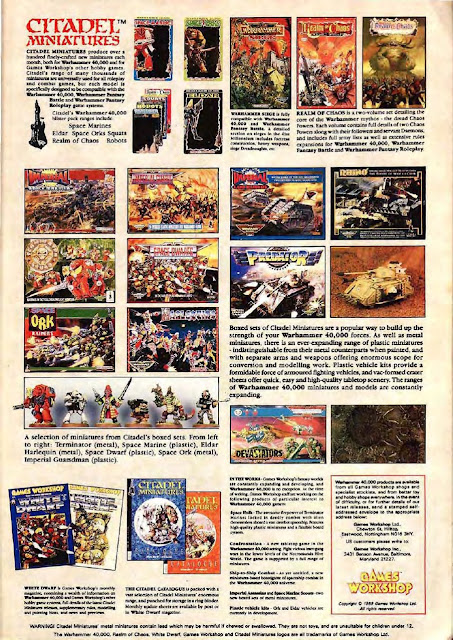