So here we are... The deadline to the second Golden Goblin Painting Competition. I'm going to house the images here to begin with, as it is easier to transfer URLs to the Bloodforum this way.

HOWEVER... Many entries have not sent separate image files and I cannot extract decent images to show off people's work. If your reading this and cannot see your entry, check your email and respond.

The entries are so much better (if such a thing is possible) than the first time around. By I think we undersold the competition by not aggressively advertising it! Its something that we must discuss in the future to ensure an increased coverage and online presence... But all that discussion is far in the future, for now, let's just enjoy the entries.

NOTE: I'll update this post with further images and background articles as I get them. I'll add UPDATE to the post title so you know that this has happened. 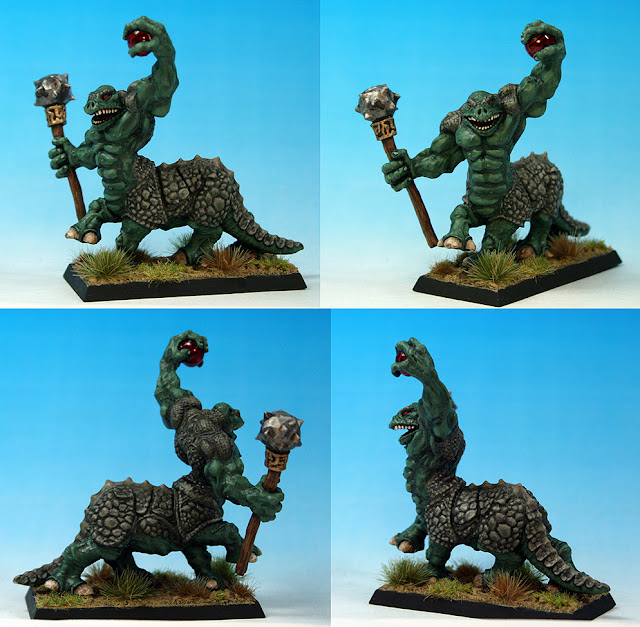 Loorassh  20th Level Zoat Wizard by Blue in VT
Spikk cowered under the over turned wagon.  Around him was a scene from a nightmare.  The rest of the wood cutting team lay in tatters around their work site, pieces of equipment and bodies were scattered about.  From behind him he heard the sharp sound of another blue bolt of electricity tearing one of the ladz apart.  He scuttled a little further back under the wagon.
Spikk whimpered uncontrollably, terror stealing what was left of his wits.  They were only cutting firewood for the armies’ camp over the hill!  They hadn’t harmed anyone or anything (well, today at least!)  The wood cutters had been hard at work when the creature suddenly emerged from the forest.  With an enormous mace in its right hand the abomination smashed anyone who was within reach; with the lightning from the red orb in its left it smote anyone who attempted to run.  It was a bolt of the lightning that had flipped over the wagon Spikk had been riding.  The wagon that now hid him from the view of the creature.
The tread of the beast was amazingly light considering its enormous size.  As it came around the wagon Spikk was not aware that it was drawing closer until it entered his field of vision.  It had a huge four legged body as large as a bull but with a torso, arms and head like orc attached to the front, but more “reptilian.”  It was mostly covered with thick dull grey scales which Spikk had seen the axes of his mates fail to penetrate.  The torso and head were more greenish in color but were heavily muscled. The monster’s face was surprisingly gentle looking considering the destruction it was currently inflicting on Spikk’s mates.  Perhaps more disturbing than its size or obvious power, was the fact that the creature had made no noise as it went about destroying the woodcutting party.  It had remained completely silent.
Now it was looking for survivors.  Spikk saw it examining each of the bodies to insure it was dead.  It also seemed to sample the air, its head and neck swaying from side to side as it sought its prey.  Perhaps it was his stench that gave Spikk away?  Whatever it was the monster’s head snapped to the right and peered under the toppled wagon looking Spikk directly in the face, its eyes glowed with massive intelligence, and flared with massive fury.
It turned and approached the wagon.
Spikk wanted to run but his legs wouldn’t respond, though his bladder did.  He was frozen in fear.  With casual ease the beast grabbed the edge of the wagon and flipped it up and off of the cowering orc sending it crashing off behind him and leaving him curled in a ball on the bare ground.  The reptilian centaur gazed at him for a moment, examining him.  Spikk felt as if the monster was looking straight through him at his black shriveled soul. Not knowing what else, but knowing he must break that aweful gaze, the orc gulped some air and managed croak:
“Wwwwot da ‘eeell are you? Wwwwho da ‘eeeell are you?”
The creature was roused from its revelry by the orcs words.  The orb in it left hand glowed and crackled with energy, it raised the mace in its right hand high, and the same time it lifted its right leg off the ground, the enormous “foot” casting a dark shadow over the whimpering orc.  Still it uttered no sound, but as the foot descended on him an enormous rage filled voice exploded inside the orcs head.
“I AM THE LOORASSH!   I SPEAK FOR THE TREES!”
Stat Line:

Equipment:
Loorassh carries only his large mace as a weapon (treat as a hand weapon) though he can choose to wield it with both hands if he feels he needs the S bonus.  The orb that Loorash carries was a gift from a woodelf mage, and though the item itself does not contain magic, it acts as a focal point for the Zoat’s own massive magical powers.  The Zoat wears no armor. 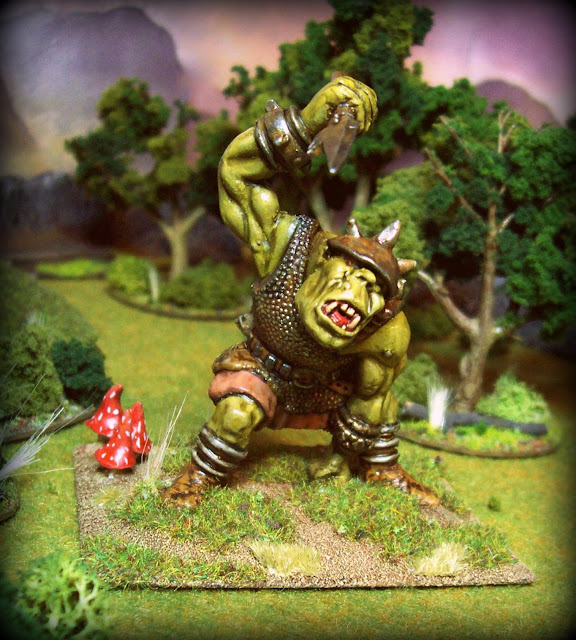 Long and many are the tales of horror and death that have chilled a brave Huscarl’s blood, despite the warmth of a good fire, a good mead and a willing wench. Principal among them is that of the Evil Giant, E’tindis Stikindat…

Hailing from the Giantlands of Norsca and no doubt warped by the insidious touch of chaos, the Jotnar and Ettin thankfully were a rare sight in more civilised climes. That is until the Evil Giant, E’tindis came to sate his terrible hunger among the lands of men.

Roaring out of frozen wastes, with teeth as terrible as the North Wind itself, the Giant laid waste to every stronghold and village he came to. Many warriors came to meet the monster in battle and long and loud were the lamentations of their women.

Things seemed bleak indeed and many a saga took a dolorous turn as hero after hero met his end in that black maw. Yet in this darkest hour there arose a mighty champion from the fierce tribes of the Norsemen. His name was Norov Irus, and he swore that he would slay the Giant or die trying.

Following the trail of destruction that E’tindis left in his wake, Norov soon had his quarry at bay betwixt cliff and fjord. His blade sang and he reeked bloody destruction on his dreadful foe – the Giant being sated and sluggish from the feast he had made of a nearby farmstead. And yet the Hero fell in the last, dazed by a glancing blow from the Giant’s glaive.

What came next was as horrible to tell as it was inevitable as the senseless champion met his fate in the Giant’s gaping jaws. However, Norov was to have his revenge! None knew what it was that he had carried about his person that made the Giant sicken so, but sicken the Giant did.

With a terrible gurgling and gushing of the most foul effluence the Giant near retched his life away on that bleak shore. Just as loud and long was the feasting and celebrations as E’tindis hastened back to the Giantlands and slowly faded from living memory…

E’tindis Stikindat may make a special Skewer attack instead of usual 5 attacks. This consists of ramming his glaive into the ranks of the unit he is in close combat with. On a successful hit, roll to wound at strength 6 for the first rank, strength 5 for the second and so on until he fails to wound a rank.

The player should then make a Cl test to see whether E’tindis spends the next turn eating the victims speared on his glaive. This also forces the units who have witnessed this terrible event in a 12” radius to make a new Fear test – modify the test by -1 for each victim the Giant has skewered! 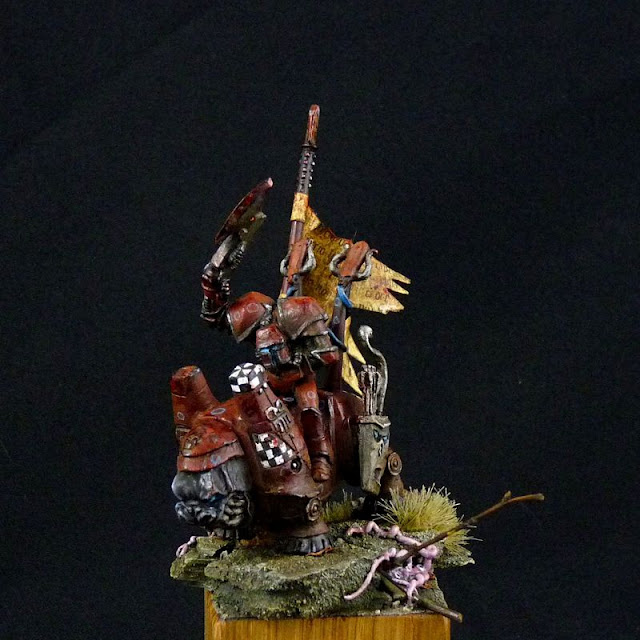 It’s been three days since we left smoking ruins of Kislevite village. And since then we haven’t noticed any signs of those blasted servants of Slaanesh, cursed God of Forbidden Pleasures. We passed remains of encampments yet no man, daemon or beast were found.
Such a shame…
Three days since our blades were feasting on human flesh and blood is far too long. I remember glorious times of conflicts between Balthazaar the Wise and his mad brother Rudolph in one of Border Princes, deep South of weaklings’ Empire. Who would have thought hate between twin brothers could be so strong. And all for what? Gold? Glory? Land? Women? All of these meant nothing then and still mean nothing at all.
All of them are dead now and even though I cannot take the helmet off anymore I am sure my human face still giggles while thinking of their mutilated corpses devoured by vultures and carrions coming from behind World’s . That was feast both for the blades and for our eyes. And that delicious smell of blood over whole field of glorius battle… It was so hard to leave that valley. Gods were so kind to us those days.
***
But now we’re here, entering Northern Wastes.
-         My Lord! My Lord! , shouted the Blood Icon bearer.
-         What is it Rhug’oll?
-         Our druchii scouts have spotted beastmen camp just behind the hill! We got them now!
Finally! I’ve been waiting for that so long! The thirst is so strong but no longer!
-         Axes high my comrades! It is high time to feed the Raging Dog and throw the bones to juggernauts! Spare no man, women nor beast! Fight to make your ancestors full of pride! Kill! Kill! Kill! Blood for the Blood God!
***
It was long battle and many of my warriors fell dead. But Khorne doesn’t care where does blood come from. Neither do I. Another camp has been noticed, the war is finally here… 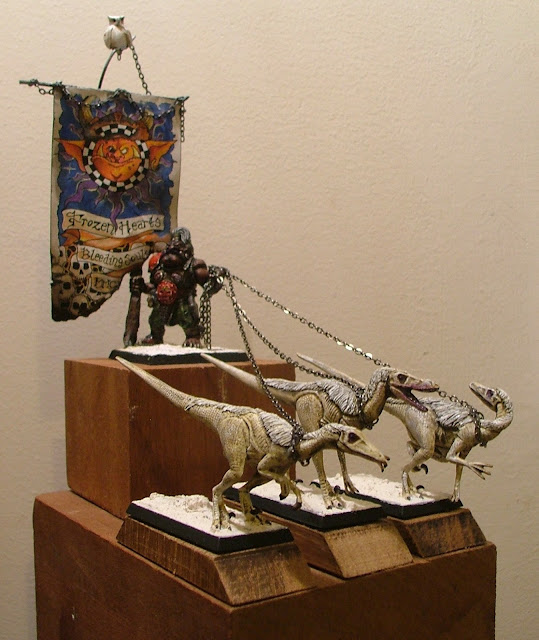 
Feared even among Ogre tribes are the Thundertoof tribe of the Norscan wastes. Often accompanied into battle by their Tundra Saurian pets, these Ogres have been known to stray as far south as Kislev in search of livestock to sate their prodigious appetites. He is a mighty warrior of the clan, having seen off his rivals in every yak-munching contest he has ever participated in. He consumed five entire yaks to earn the right to carry aloft the clan standard, which he has fixed to a tree he himself uprooted from the frozen steppes. Despite his fearsome disposition Glunterzpike has always had an affinity with animals and he encourages small mammals and birds to nest in his banner tree, maybe so he always has a snack with him when he goes to war.

Sergeant Glunterzpike is an Ogre hero and follows the rules for Ogres on page 237 of the Warhammer rulebook.

Glunterzpike carries the Army Standard of the Thundertoof tribe and is accompanied by three Cold One Warhound pets.