A quick post today about some of the painted miniatures that caught my eye over the two days I was at the Foundry. It was great fun to stroll the many tables snapping away, though the light conditions were not always perfect, my iphone managed to capture plenty of Oldhammer goodness. I have whittled my snaps down to what I consider to be the very best work that I saw. The trouble is, I have no idea who actually painted some of the stuff I have to share with you, so if you happen to know who's work is displayed in these images then please comment below so I can put names to models. 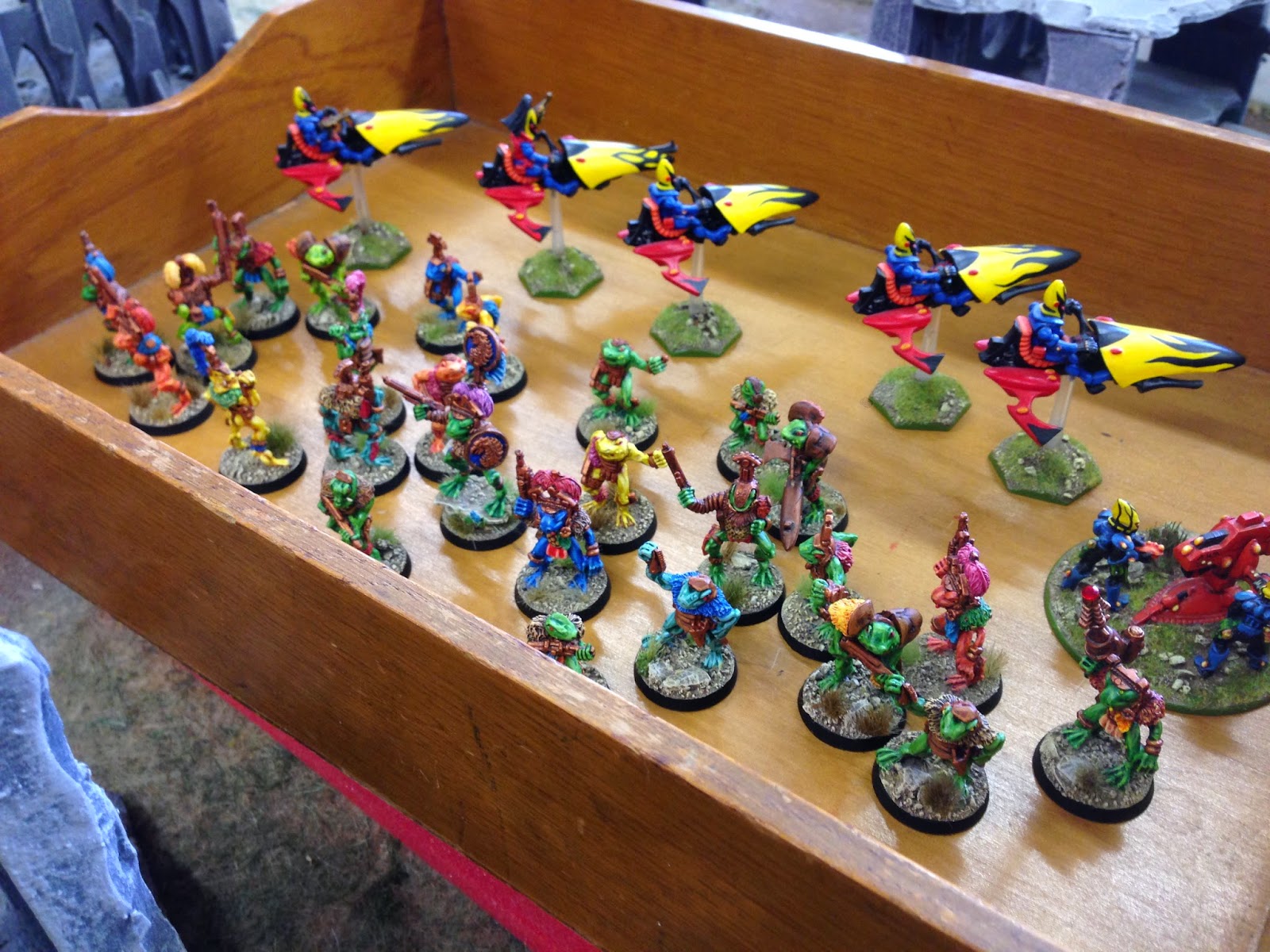 First up, we have this shot of these superb Slann and Eldar jetbikes. I spotted these all alone on the Saturday and there didn't seem to be anyone around to ask about them. So if they are yours, please say! It was the richness of the colour that initially drew my eye, as its this kind of tone that I am trying to bring into my own work now. Not adding white to highlight seems to be the trick, though high pigment paints will also no doubt help achieve this look too! Many of you will know that I am not a big fan of identikit paint jobs on miniatures. The idea of painting up thirty to forty models in exactly the same way is my idea of torture. Here, the slann are presented in varying colours and this really helps make each model an individual, but together they make a fantastic looking army. The basing really helps tie this together, and the naturalistic tones offset the alien vividness of the slann. 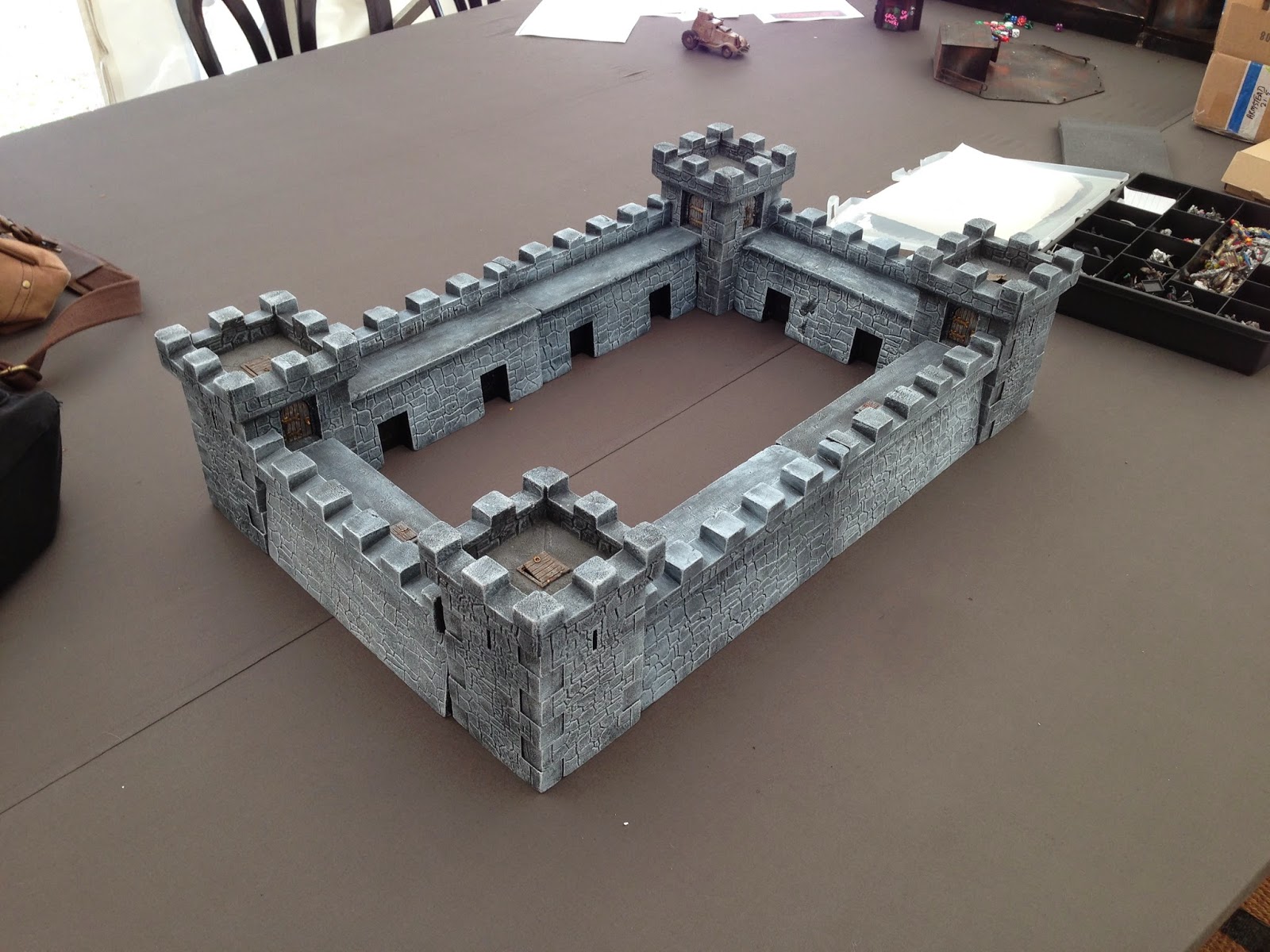 You've got to love the Mighty Fortress! Something about the polystyrene makes it look more realistic, certainly when compared to the plastic kits I have seen in recent years. Its still a great kit, but one whose value has soared in recent years. If you wanted to get your hands on one of these online you are probably looking at about £50, though Bryan Ansell thinks this is a fair price as its pretty equivalent to what you had to pay for it in the 1980s. This example has been beautifully drybrushed and really 'pops' to life. The doors too are worthy of a mention as they have been perfectly finished in bronze. One day I will paint up my castle and when I do, this image will be consulted regularly! 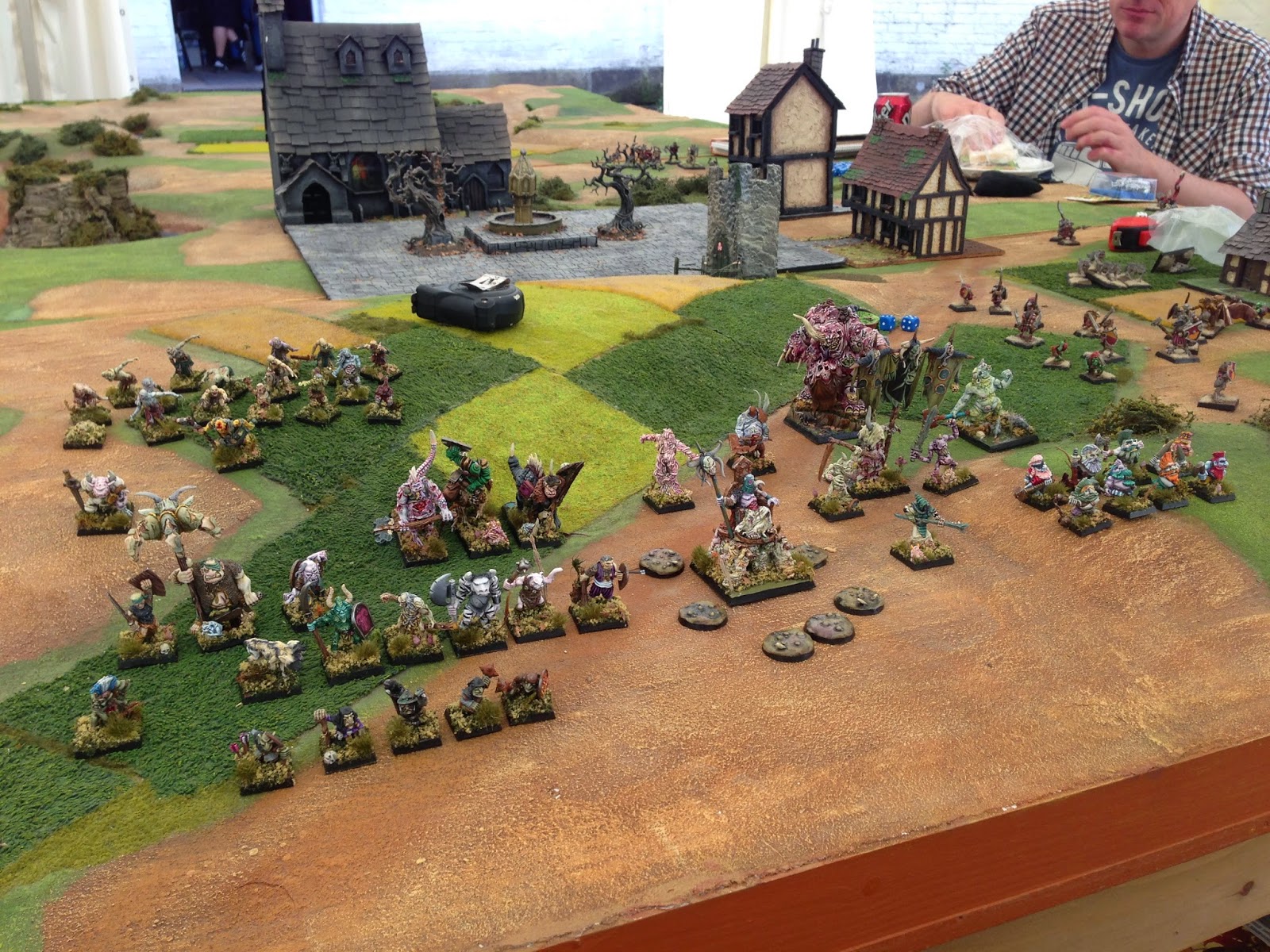 This shot is from the Chaos Warbands game inside the marquee. Now, I know for a fact that these are the work of many, many hands but I cannot recall who those hands belonged to. A lot of the miniatures you can see here are classic Citadel, but a few more modern sculpts lurk within their ranks too, and you know what? They fit in beautifully! Still, these forces follow that all important criteria of miniature painting - the need for the models to be varied in both shape and colour scheme. Its hard to pick out a favourite miniature from this photograph so I will refrain from doing so, choosing instead to select a small group of models for special praise. The five beastmen on the left of the picture are absolutely outstanding and really capture that old school painting chic with aplomb! 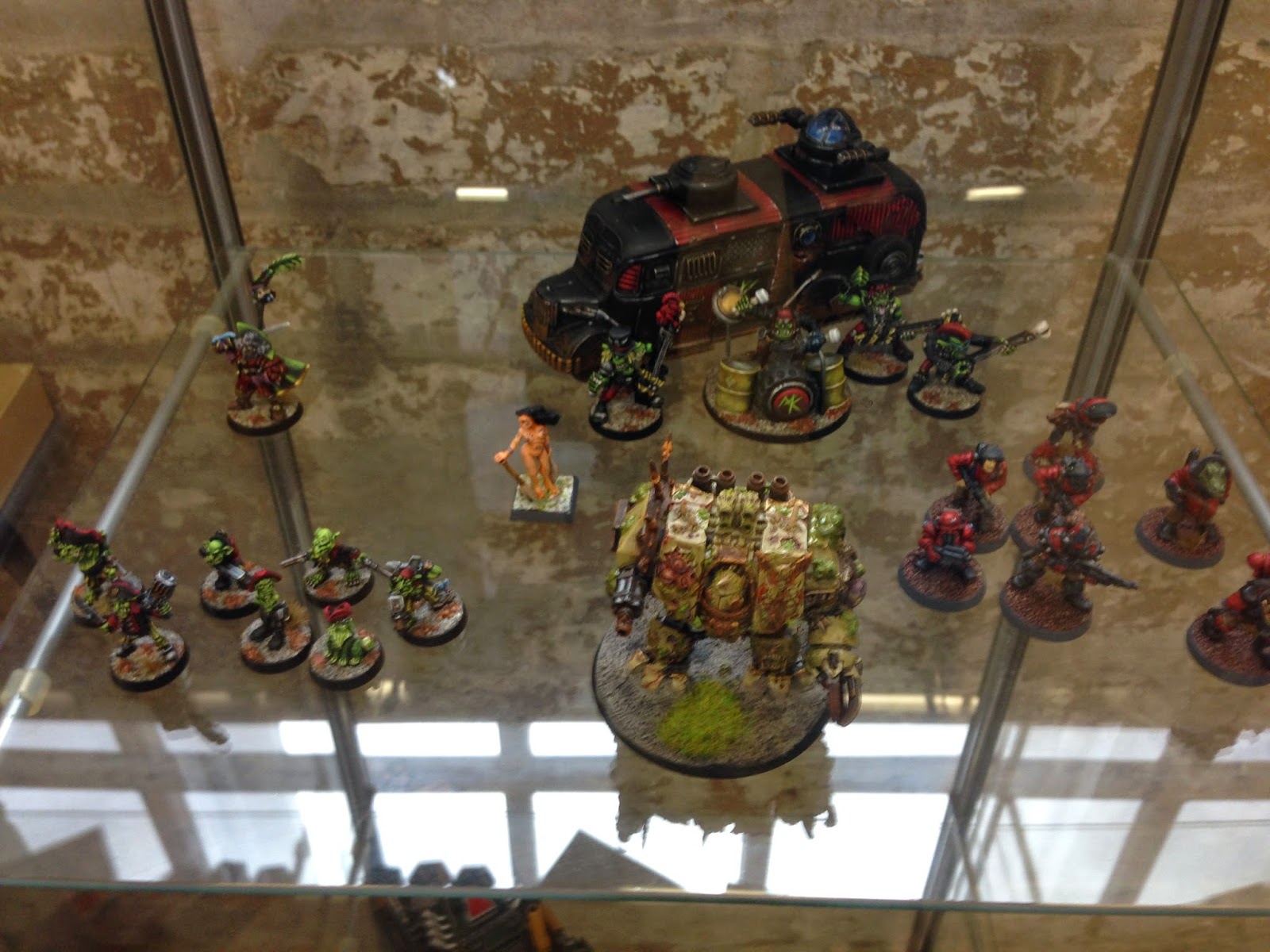 For those of you not in attendance, I can tell you know that there was a rather informal painting competition organised by the Foundry. The rules were simple, pick a model and stick in the cabinet for judging. This worked really well and is certainly something to emulate in the future. With the sheer amount of models lying around it was very easy to select something and place it in the cabinet for appraisal. Kev Adams was supposed to judge the result alone but found the task too challenging, such was the range and depth to the skills on offer. I helped him make the final decisions (which wasn't an easy task at all) and we decided on three categories - large, single figure and group. What follows are the winning models in each of these categories... 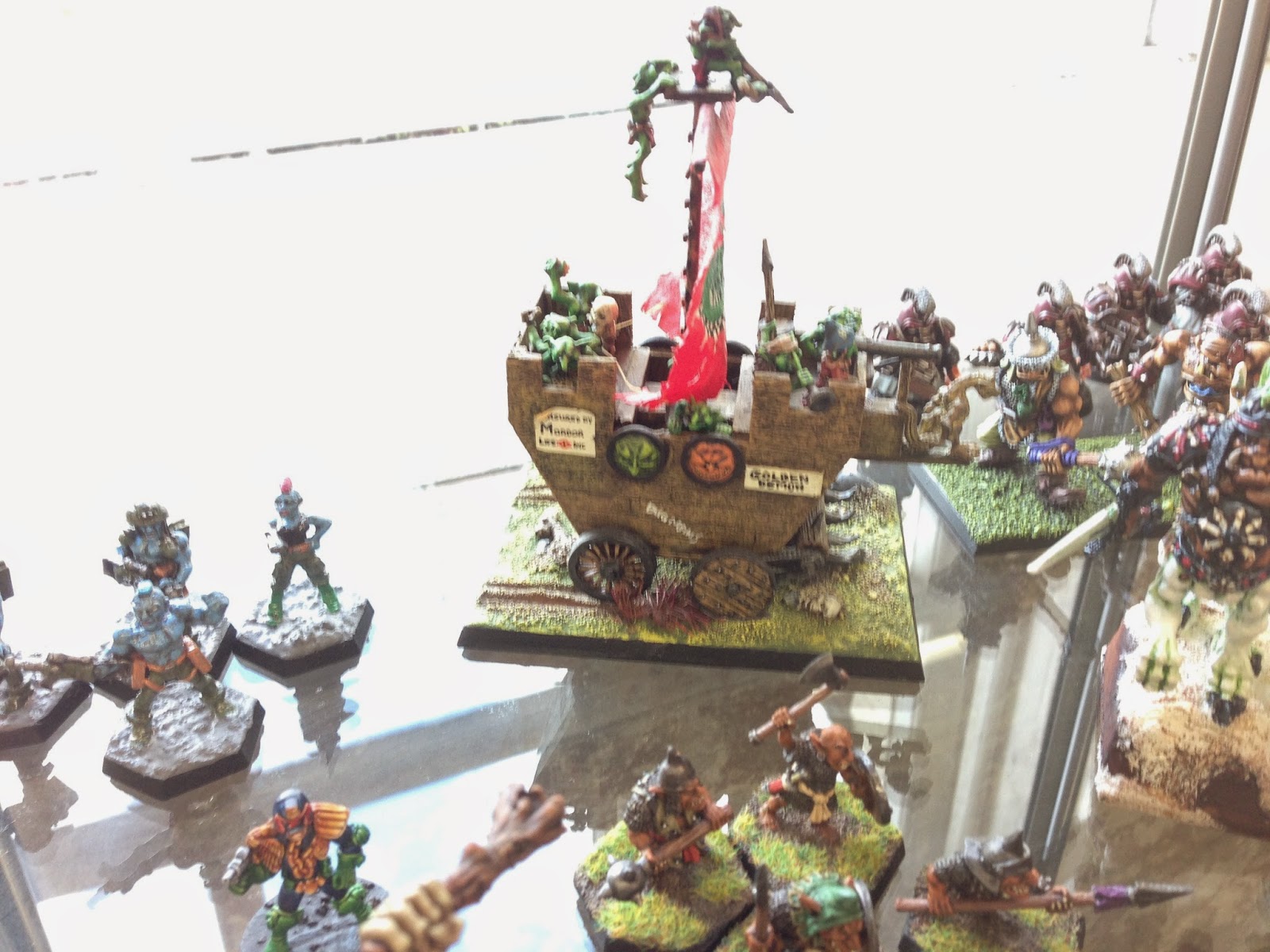 Graham Apperley won the 'Large' category with this excellent conversion that dates back to the original 1980s Golden Demon Awards! Its a great fun model that is very evocative of the era that we, of course, value and are inspired by. The trouble was, it was cased in the highest section of the cabinet and with the sun shining in through the window, it was really difficult to capture properly. Graham if you are reading this, please send me a better photograph so I can update this post! Chris Web won the 'Single' category with the pink and purple horror. A miniature like this needs no other word to describe but incredible! I picked this model out because I felt it could have been part of Bryan's collection and had been very closely observed from RoC era paint jobs. The rest of the daemons in the group were also superb to see. 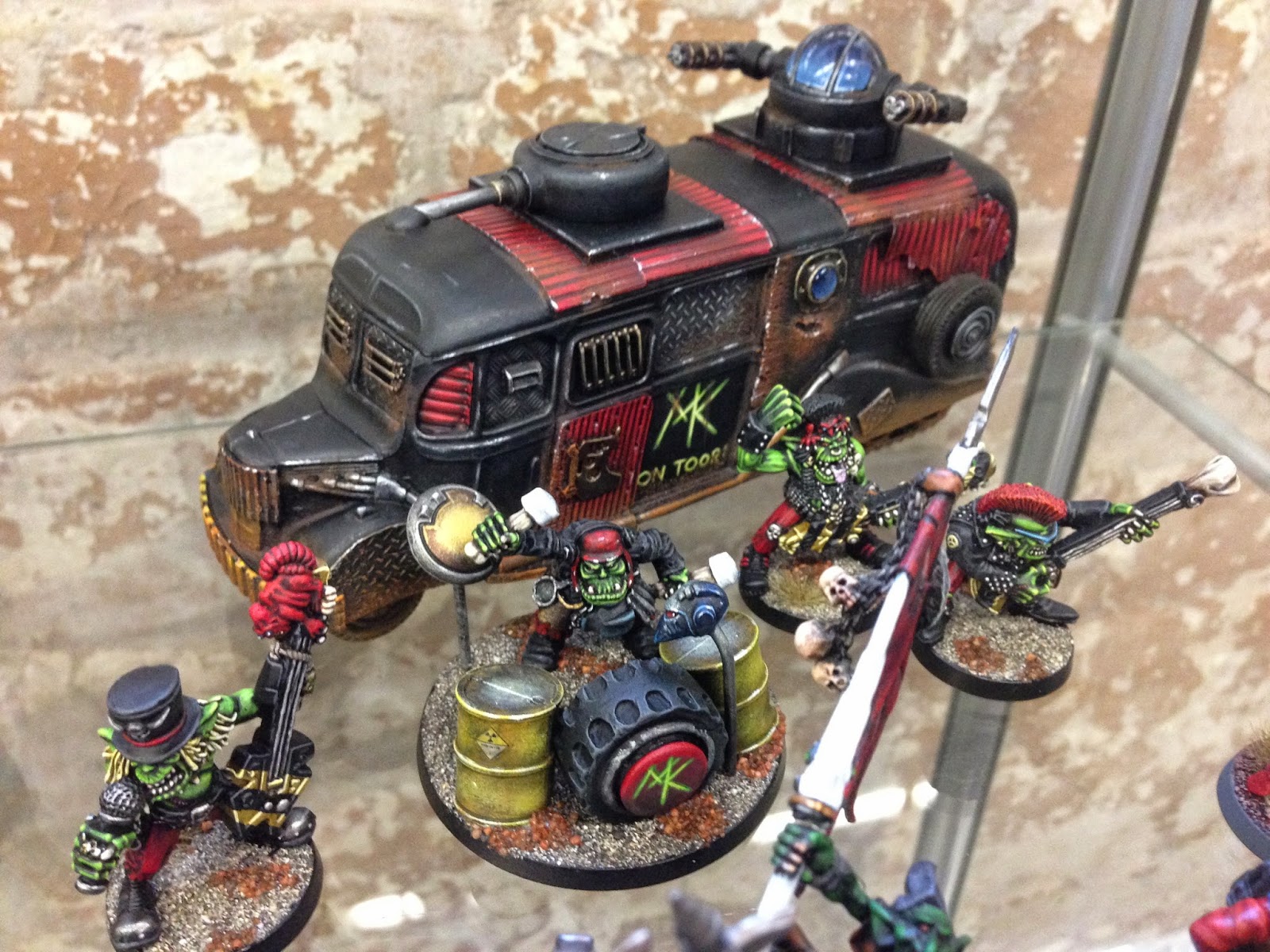 Paul Shorten won the 'Group' stage with this highly technical interpretation of the 'Goff Rockers' who were amusingly 'on toor' and ready to 'rok' no doubt. What caught Kev's eye was the drummer conversion which really completed the original set and he was really impressed with the idea of the space marine helmet as part of the drumkit. 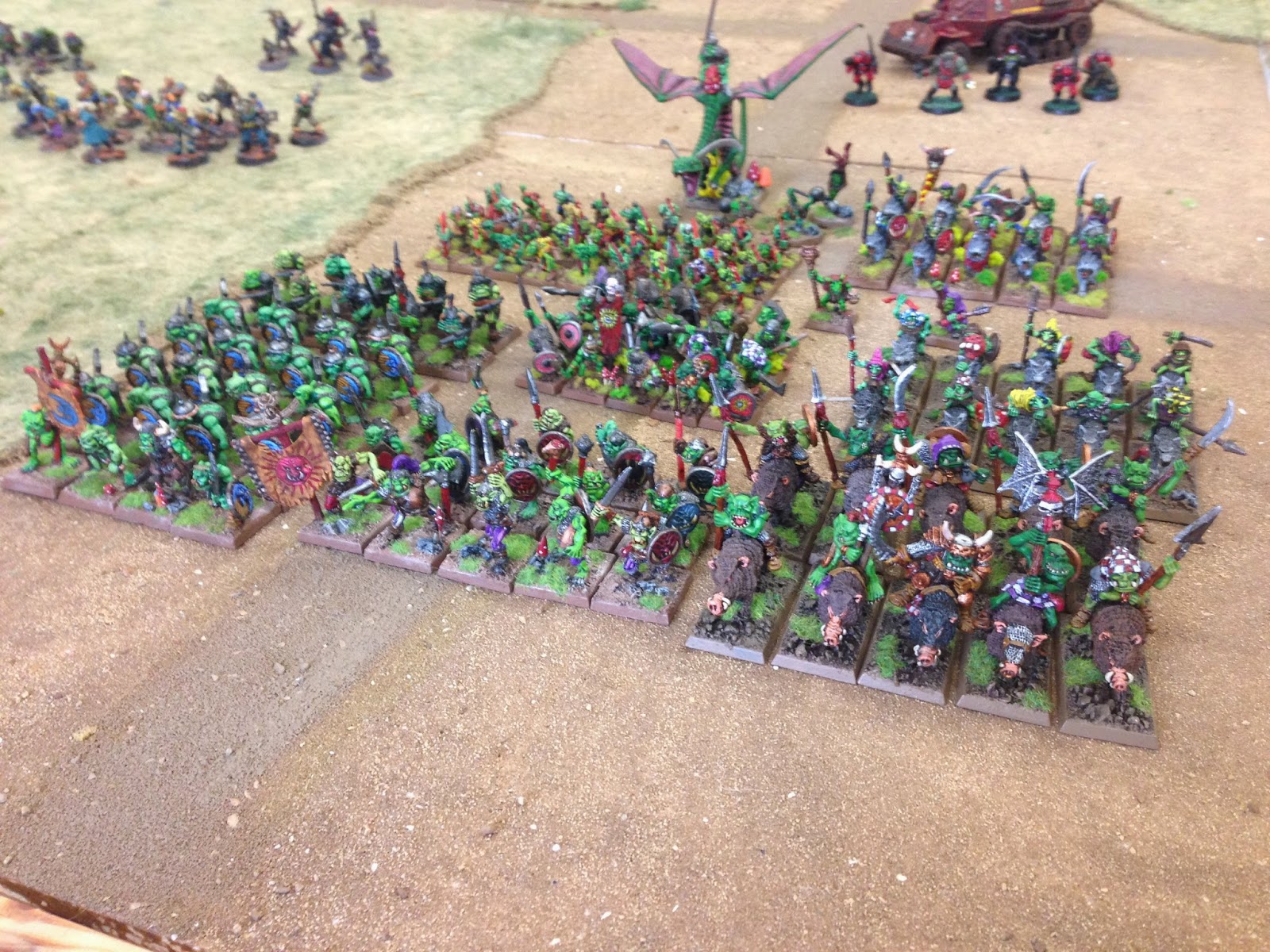 Now this is what I call a goblinoid army! This force apparently belongs to a bloke called Erny. 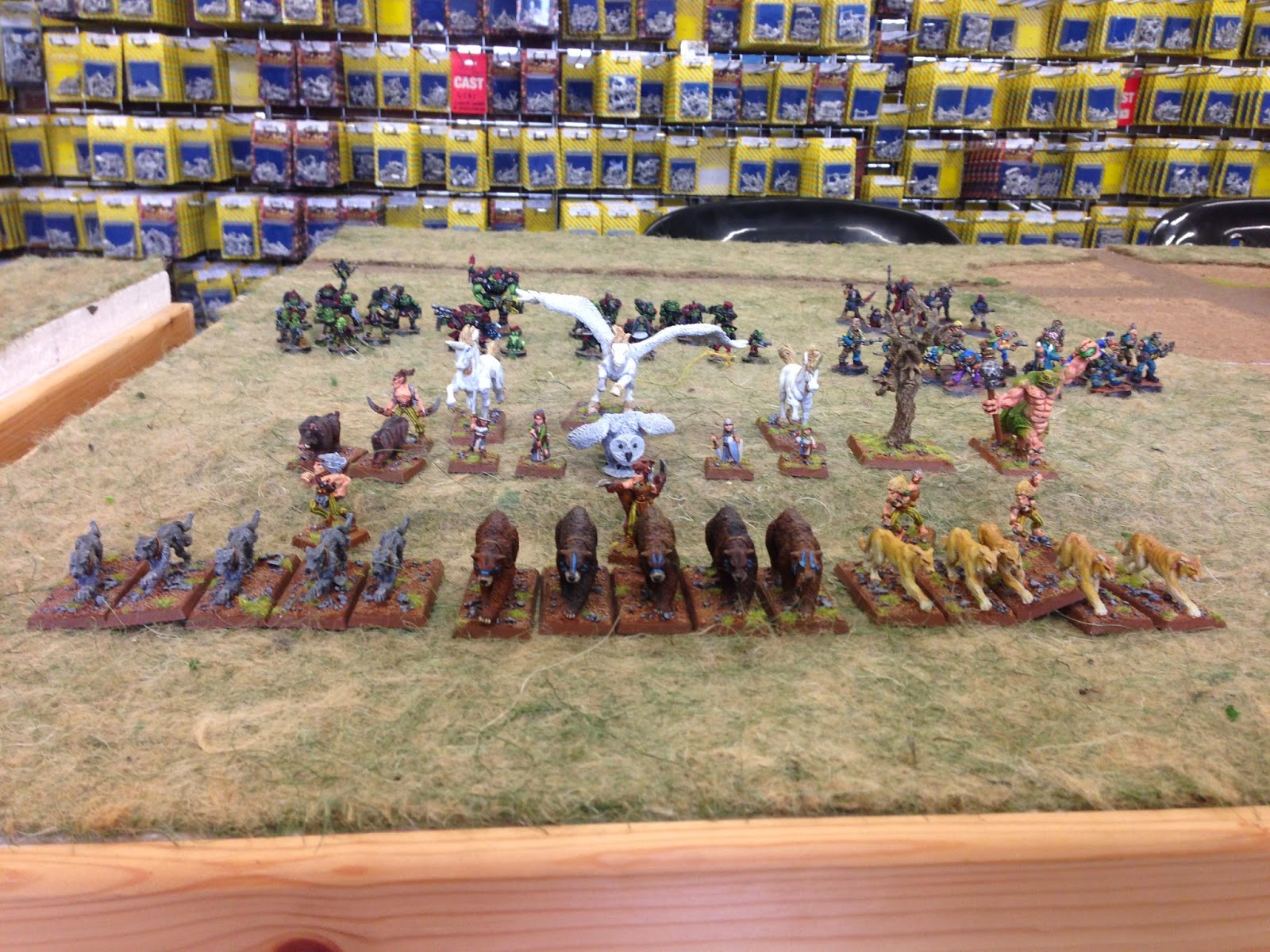 Judging by the distinctive bases, these fantastic elves are part of Harry's collection. Now, Harry has been a well known wargaming figure for many years and I can remember him from my warseer days. His 'Blast from the Past' thread encouraged me to start my own project log, which was the forerunner to this blog. He is also a very pleasant chap. What struck me about this force is the sheer number of Jes Goodwin bears and big cats. These things are a expensive sight online and seeing so many in one go was a treat! 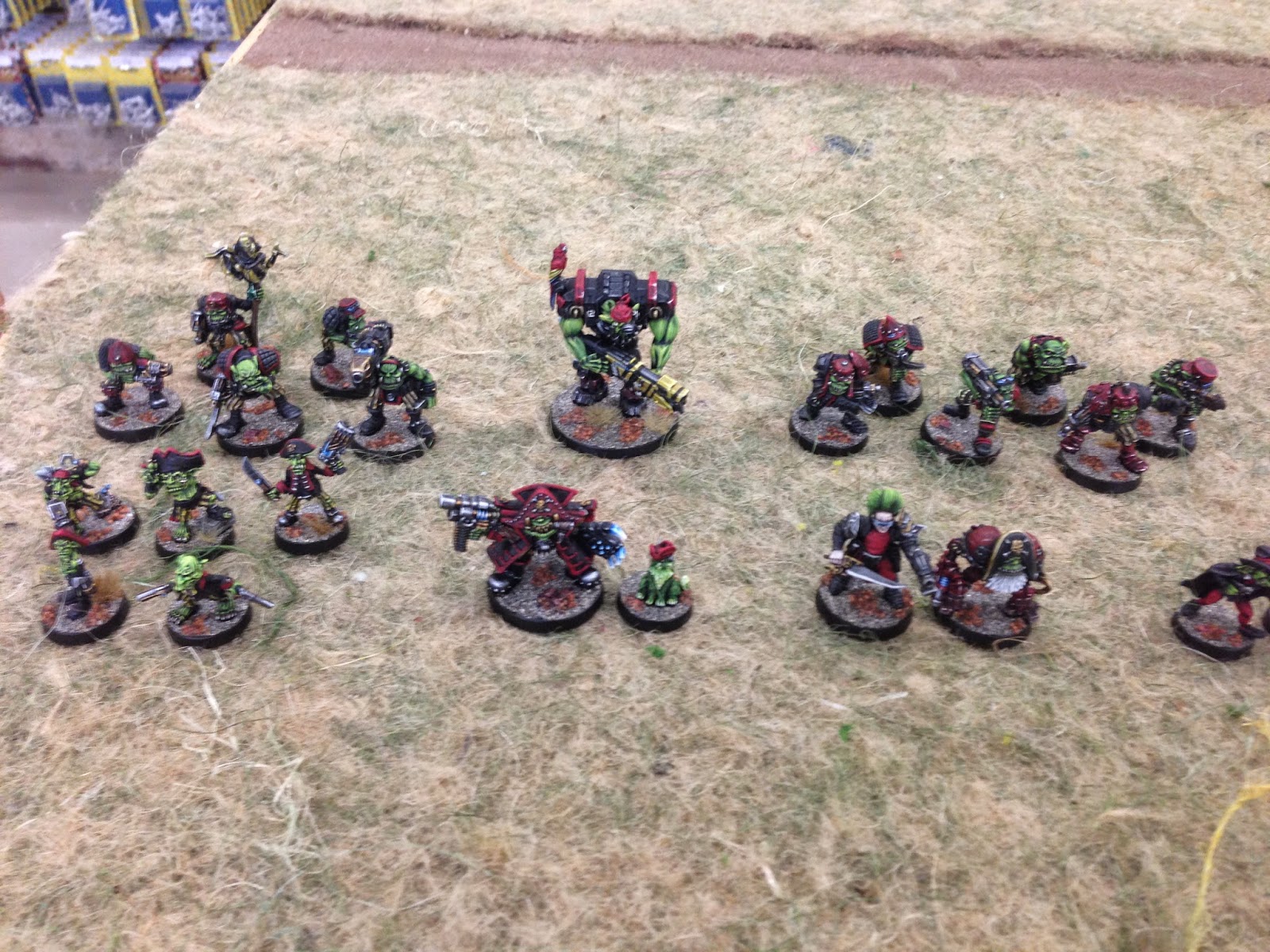 Paul Shorten clearly didn't stop with just the 'Goff Rockers' but unpacked an entire force of old school orks for our (and now your) enjoyment. 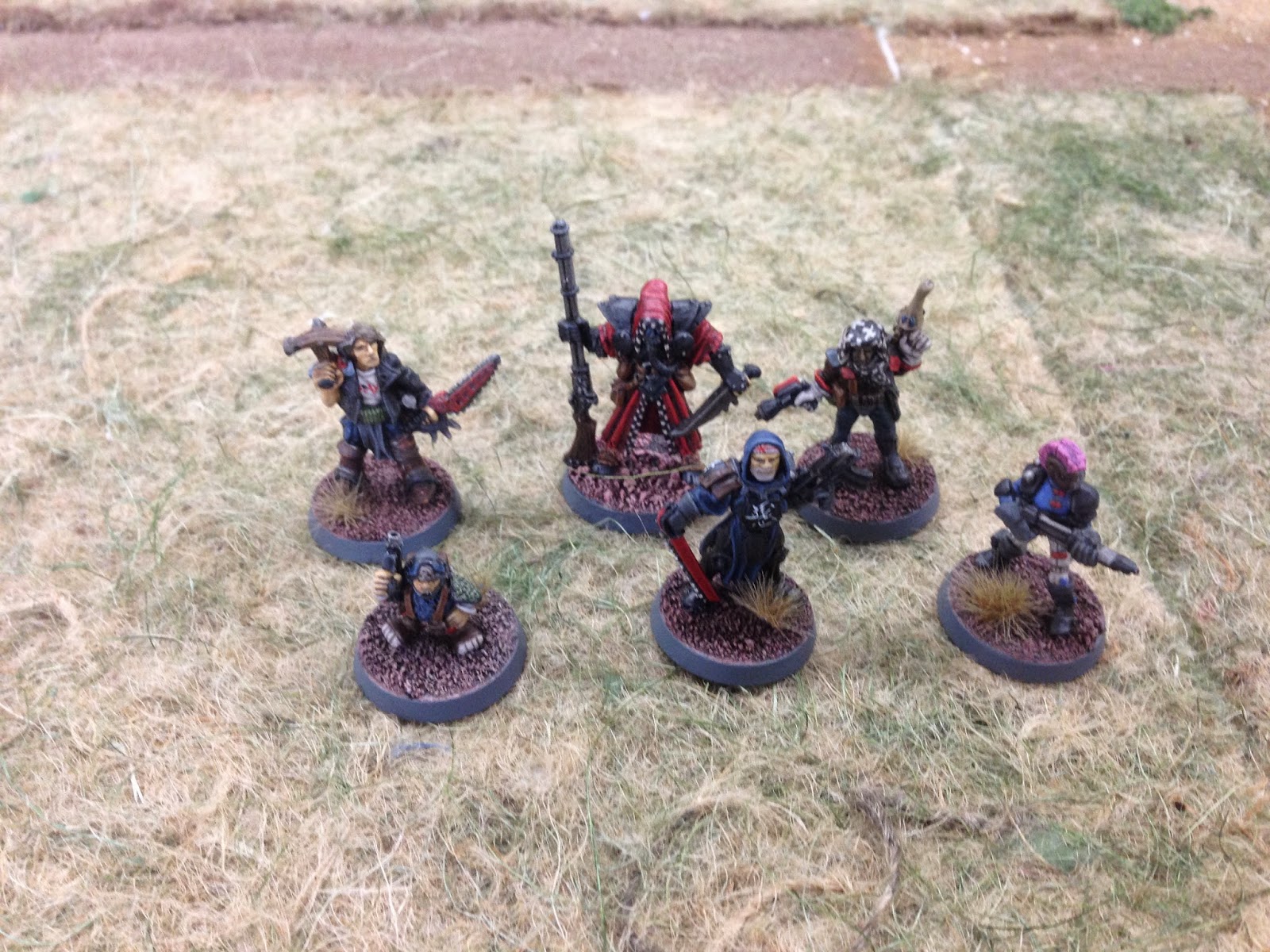 A varied but striking sensei warband by a gifted painter who's name currently escapes me! What struck me here was the range of different models used to represent the group. Even though the source material is very broad, the concise painting holds the group together very well. The simple but effective bases reward the group with a little coherency too. 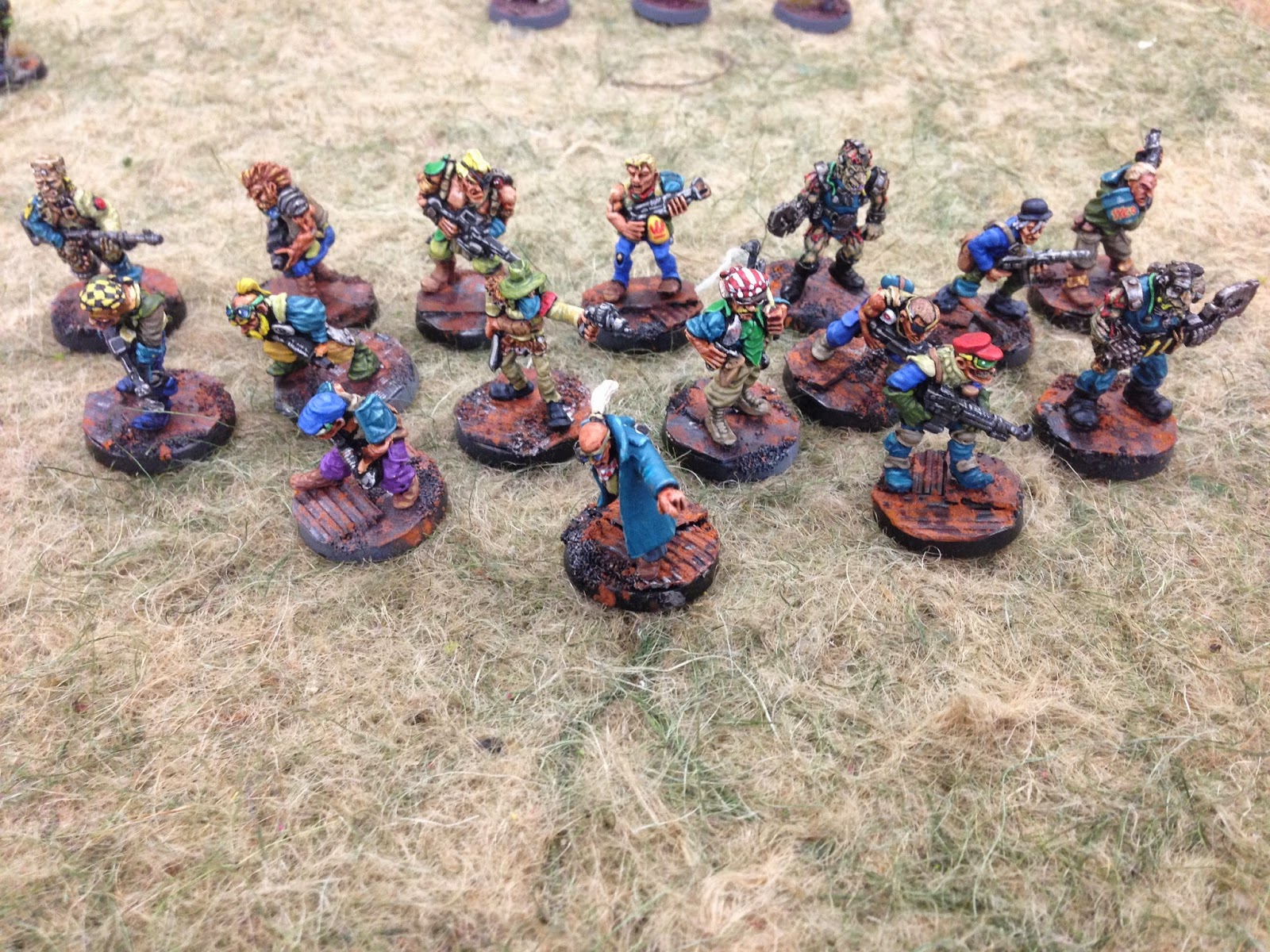 And finally, this force makes up what I believe to be a Confrontation force by, yes you guessed it, another painter who's name I did not catch. early Rogue trader models have that distinctive look that easily makes for a good painted figure, especially if you are using bright colours like these. A nice final picture to round things off with.

Now before I depart, mention must be made here of the unreleased Marauder wizards that Bryan gave away as prizes for the different painting competitions, one of which I was lucky enough to get my hands on. What follows is a catalogue of what those models were. I know there were a lot of people keen to see the models that were handed out. With a little work behind the scenes, we think we have established what was on offer. Any one reading this who had the container in your hands will know how difficult it was to choose a single figure from an incredible collection of rare figures. 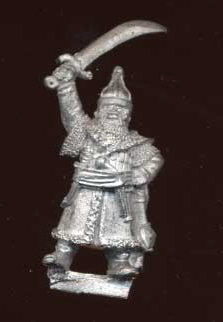 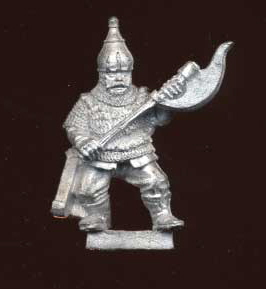 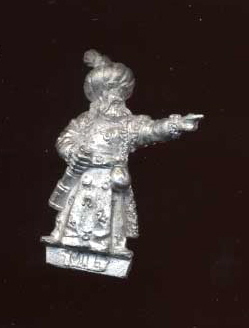 Did you win one of the other models? Do you know who won the other models? If the answer is yest to these questions then please let me know so I can add the captions to the photographs above. Thanks. Mention must be made here of the CCM group from which these images were taken. Probably the best resource for identifying your lead.