The Return of the Unfinishables: Wood Elf, Chaos Thug, Man-at-Arms and Mindflayer 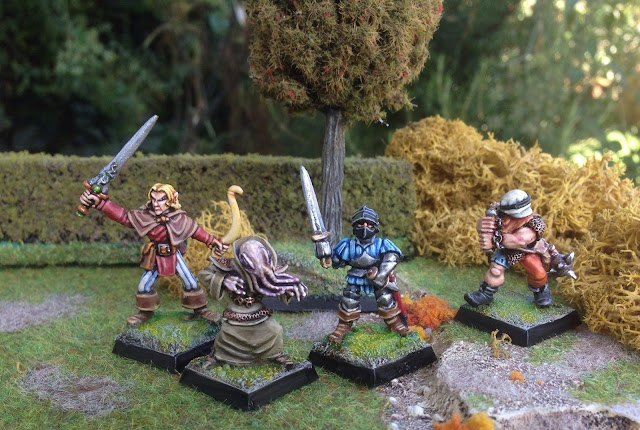 Over the years I have held a theory that certain miniatures conspire against the enthusiast to ensure that they remain unpainted. Perhaps the feel of warm acrylic makes their leaden skin itch? And hence they resist all attempts of completion, standing alone and disregarded in some forgotten corner of your leadpile. Miniatures such as these have a name, you know. A Miniature Moriarty!

Over the years I have been guilty of squirrelling quite a large number of these away and from time to time (roughly two years) I grow tired of looking at their blotchy, smeary faces and dribbly bodies and commit myself to the task of breaking them in. With a paint brush mind, not a whip - I am not Chico! Despite my uncompromising approach, all four of these models attempted one final flight to freedom and slipped from my carrying tray as I was transporting them for photography. They scattered across the hard oak floorboards but, perhaps due to my unbending will, suffered no damage. As I type these miniature miscreants have been finally caged; lined up at the rear end of my modelling cabinet on a lead and water diet. 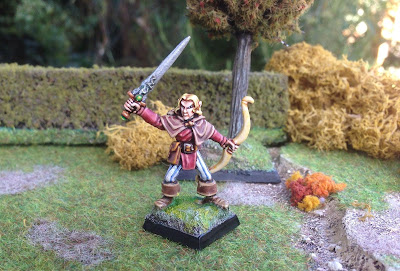 Considering the amount of whinging we did in Bryan Ansell's ear to cast up some of his unreleased wizards, you would have thought I would have painted the entire Time Warped Wizards set by now, but this one slipped the net - perhaps because it was never intended to be a wizard at all. But a wood elf in fact. His chunky gait and over-proportioned size makes me wonder about his origin, but as with all the figures in this release, their origins are lost in the fog and spilt beer of yesteryear. He certainly wasn't a classic '80s elf at any rate.

Orginally painted in a series of greens, I found that the colour combinations just didn't look right once the highlights had been added. So he was condemened to lanquish amongst the unfinishables while I worked out just what to do with him. After a few futile attempts at correcting the green, I washed the enitre figure in a nice brown ink and just started again. I have always thought that wood elves work best if you stick to the colours of the seasons; spring greens and yellows; the deep greens of summer; orange, brown and dark reds for autumn... I have never really considered during a 'winter' wood elf, reserving that colour theory for the Dark Elves instead. 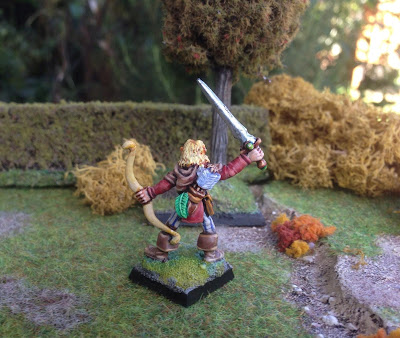 Choosing an auntumnal look, I gave precedent to browns and reds for the bulk of the clothing, opting to do some stripy pirate trousers to break up the monotony. With my elf now sporting a dashing blonde hairdo I decided to tie this in with his chunky bow and leave blue and green as spot colours. All in all, I am now pleased with the result and just need to complete the final wizard in the set (my original was miscast, and Marcus Ansell gave me a replacement quite recently) and that particular project is complete.

I hope you like him - looking at him now, I detect a whiff of Jason Connery about him aka Robin of Sherwood. Rrrrrroooooobinnnnn the Hooded Mannnnnnnn - dun dun! 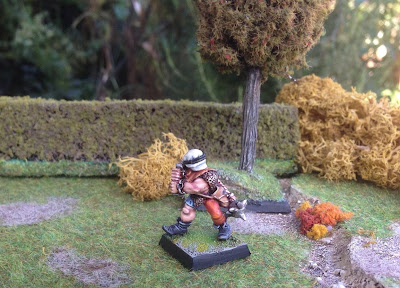 This Chaos Thug has a rather different tale to tell. He was an impulse eBay buy due to his really low price and hideous paint-job. He had been so badly treated by his previous owner that I lacked the will to clean him down with the mighty Dettol. So I thought, why don't I just paint over the top of the previous effort.

As you can see he looks great, despite his rather strange propositions and pose. Is he carrying that morning star to the local carboot sale? And what on earth is he doing with his head, looking in the opposite direction his is walking in? I guess that is just life in the chaos wastes, and having actually been there (see here) I can sympathise with him.

I was pleased with the way his hood came out, as getting white right can be arduous. I used a grey base coat to start with, adding progressively larger amounts of paint as I highlighted. He wears some kind of tattered leather jacket and so I used him as a opportunity to paint up some orangey leather. It is amazing how a chestnut ink glaze brings out the richness of the colour! Try it! Thoroughly tired of limiting the amount of colours on my models, I gave him a nifty pair of red/blue trousers and highlighted them in my usual fashion, simply adding the lightest tone of Foundry's Boneyard to the basecoat. The rest then just slipped into place; the black of the shoes matched his funny visor thing, though I found that highlighting this just looked odd so I left it matt black. The rope was really easy to do; just an undercoat of the darked Foundry Boneyard followed by an orange wash. I just highlight up with the remaining shades in the Boneyard triad. A little gold and silver drybrushing and he was ready to join my Khorne army. 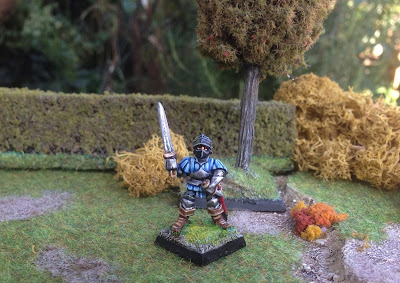 Disliking painting platemail as I do, this guy was abandoned due to being boring in the extreme to paint and frustrating to complete. Unlike the other models which were lavished with around two hours of painting time, this guy was knocked off in about forty minutes - does he look like it? I just rehighlighted all of my original painting and changed the colour of his padded jacket from white to blue to give him a little colour interest. The red scabbard also helped in this respect. I found using a blue glaze over the armour helped breathe a little life into him too. Far from my finest work, but perfect for the rank and file. 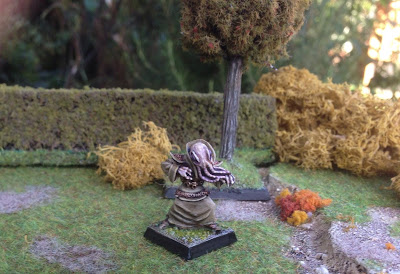 Finally, Stuart's Mindflayer. He chided me the other day that I had had this model on the painting station for two years, so I was determined to complete him. Like the thug, he had already been painted (this time by me) but I was never happy with the result, hence him being transported to the Moriarty pile. In the end, I realised that there was nothing wrong with my painting at all, it was just the colour scheme didn't suit the model. Originally, he had an orange skintone and purple robes you see. 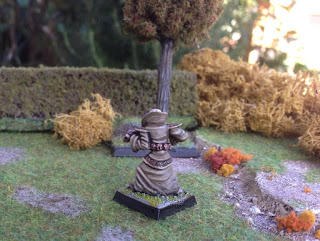 Considering Stuart is now painting up a far few Nurgle models, and I had completed a few models in this project for him in the past, I used similar tones to those employed before and the gribbly chap just seemed to paint himself in just over an hour. Having just two colours and a bit of gold to work up helped with the timing. I am pleased with the way he turned out and I hope Stuart appreciates him now.