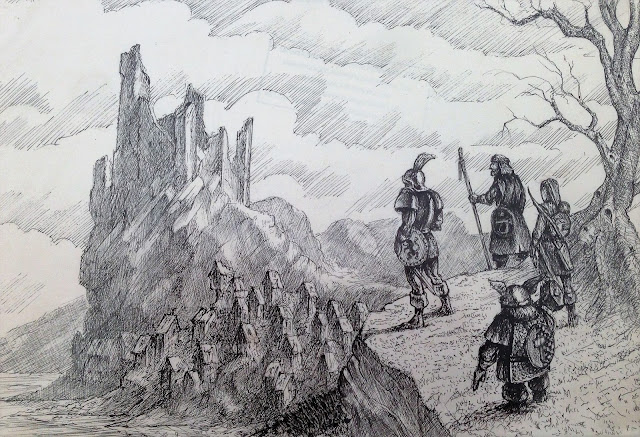 One of my personal highlights of the Oldhammer Weekend, as I suspect it is for many, is speaking with the Grand Master of Chaos himself, Tony Ackland. As in previous years, Tony had brought with him a new batch of illustrations from his long GW career, including quite a few pieces he had recently uncovered.

One of these pieces was the illustration above: another one of those evocative landscapes that Mr.Ackland produced for the Warhammer mythos that conjures up imaginative thoughts of unlimited adventure. Well, dear reader - do you notice anything familar about the unpublished (as far as we can tell) illustration above?

Have a closer look at the four figures contemplating the ramshackle conurbation below them. Do they ring an adventurous bell?

Of course, they are the four player characters from Advanced Heroquest. Tony couldn't remember anything about this particular sketch so I spoke to Oldhammer's authority on all things Heroquest, Geoff Sims. He instantly confirmed these were the characters from the game before checking through his leatherbound edition of the AHQ publications. We couldn't find any sign of this illustration so it's pretty safe to say this is its first public airing. 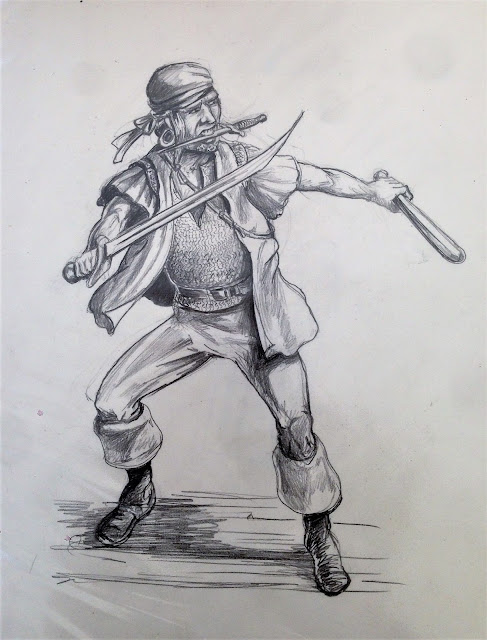 We are pretty sure this illustration is also previously unpublished, though with the sheer amount of WFRP material out there we could well be wrong. Please correct me if this is the case. Tony could remember more about this illustration: it is a pirate player character from WFRP's career section. For whatever reason, this character (and a number of others, apparently) didn't make the final cut of the game and wasn't included in the rulebook.

I wonder if anything else has survived like this waiting to be discovered, eh? 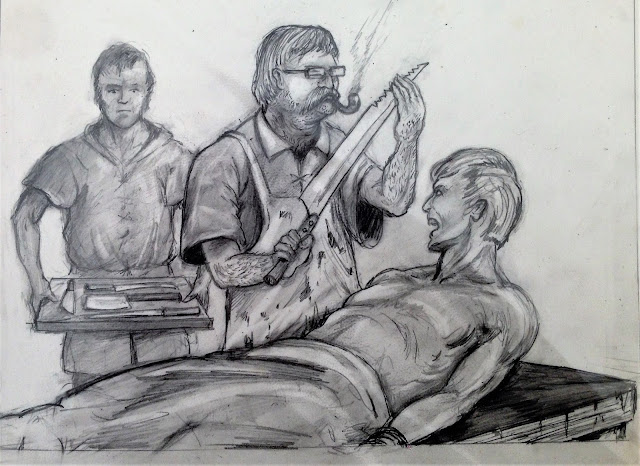 This famous illustration certainly made the grade and appeared a number of times in print, most notably in the Warhammer Fantasy Roleplay rulebook. I always loved this picture, and after recent events in my life really strikes a chord. I really know how that guy is feeling! 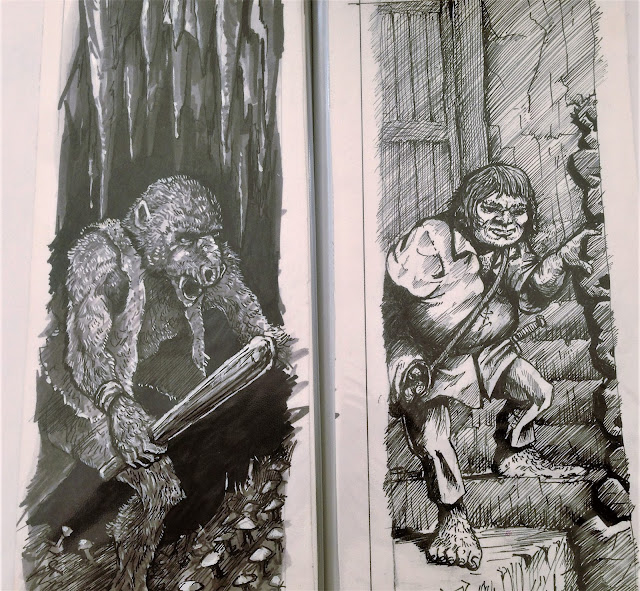 These illustrations also caught my eye and I am pretty sure I have seen them before in print. Anyone recognise them? The two illustrations are separate peices, with the first depicting some kind of beastman while the second is a rather swarthy looking hobbit, probably sneaking into someone's kitchen for a quick second breakfast.

The remaining images from this post are all from Tony's six month sojourn to Necromunda. I am not enough of an authority of these materials to state if they have been been previously published, but I certainly cannot recall seeing any of them before.

All of the images represent the different denizens of the underhive and I know little more about them than that. Enjoy them and wonder what might have been if this project had ever seen completion. 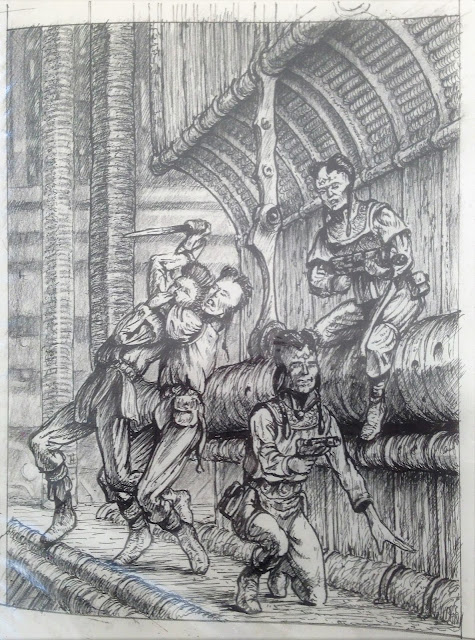 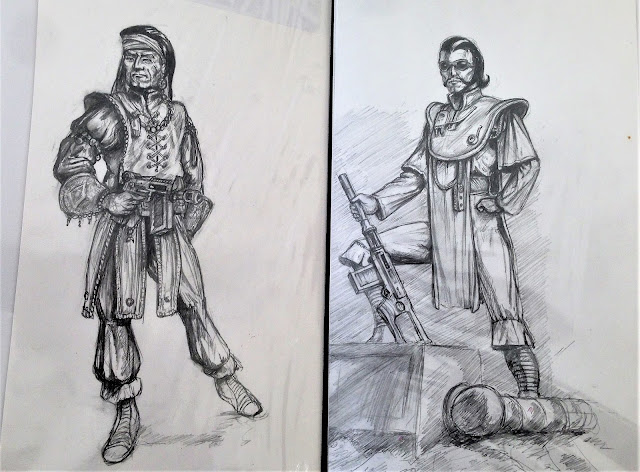 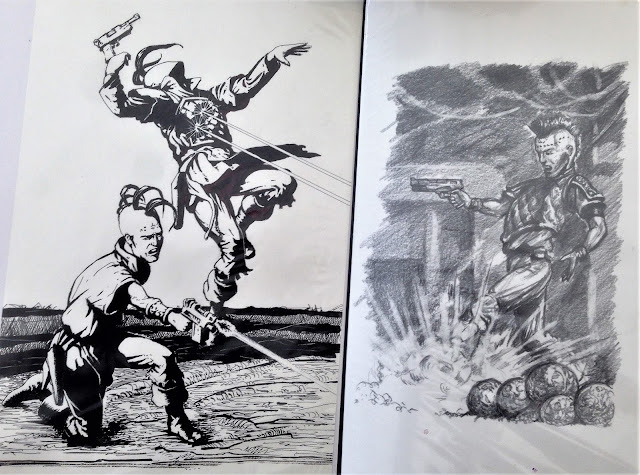 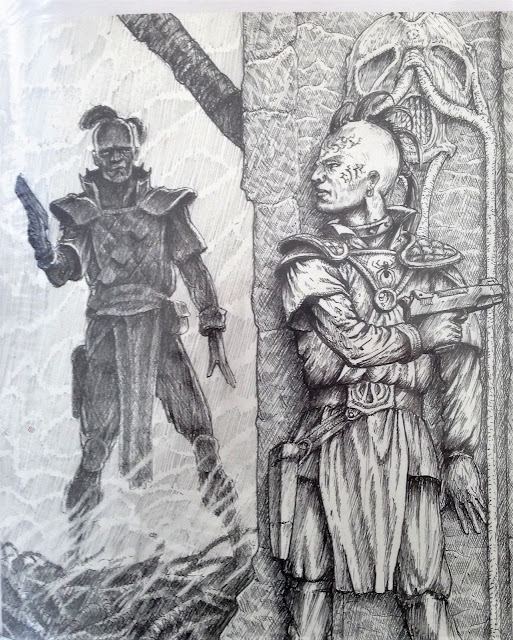 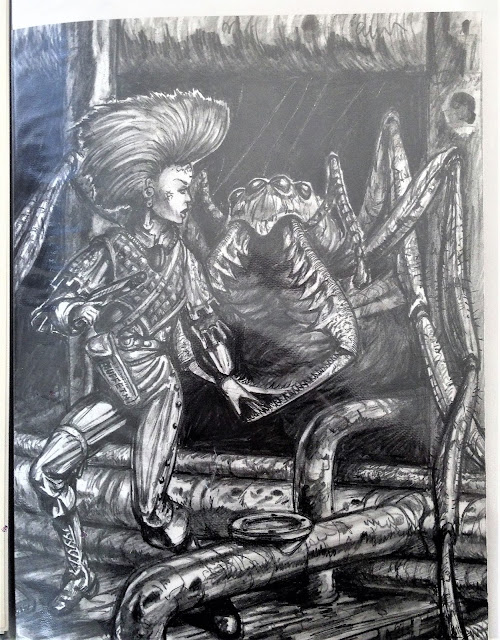 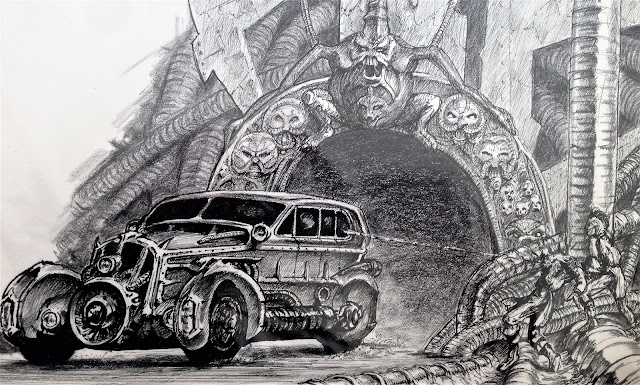 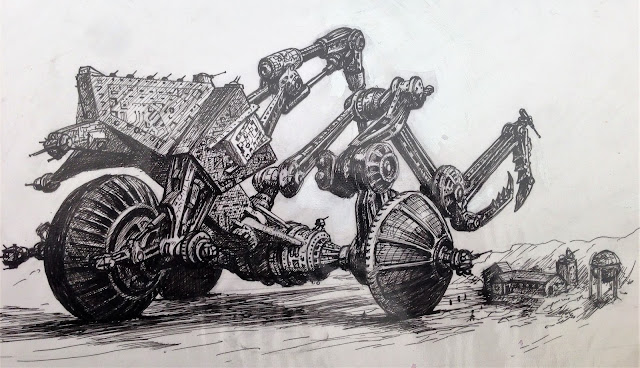 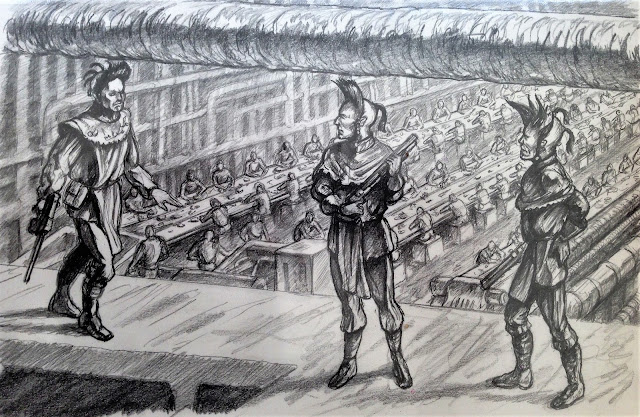 As always big BIG BIG BIG thank you to Tony Ackland for unearthing this artwork and bringing it to Newark for fans to appreciate, and for spending many, many hours with curious collectors and their questions.

If you want to know about Tony and his artwork, why not have a look at the two interviews I did with him in years past, both of which are packed with loads of his recollections and artworks.