"Thanks , I really appreciate what (GoblinAid) and everyone else is doing to help me , I feel bad as I've not communicated on facebook but I've never wanted to join and the best way for me to get over what happened is to get my head into something creative so I'm compiling lots of music as its a hobby and great fun as I love mixing and doing interesting things with synths and ambient sounds.

It means i will be locked at desk when i get back to work as theres lots of new sounds to keep me interested. I'm hoping to give it a bash next week as my eye is improving. I was on a roll and making my first female models and am itching to get back. I'm lucky I didn't lose my sight in right eye. The socket was that badly smashed that my eye was lower than it should be and the operation was very complex they tell me.


Still got a broken jaw and nose is broken in three places and I was shown X-Rays yesterday of how my face was all caved in and why they used metal plates to rebuild cheekbones .


I hope they catch these idiots before they kill somebody .


I'm not happy because they got the wrong house as its my neighbour who they were trying to rob but we both have gravel drives.There's been a spate of similar robberies and a girl was mugged the other night outside the local shop by three hooded thugs who sound like they could be the same lot .

I'm on the mend and will bounce back, theres a new picture attached and I dont mind if you post it so people can see I'm ok. I'm healing very well due to the fact that i drink lots of wheatgrass and juice vegetables and eat a lot of fresh fruit, I'm totally into a healthy raw vegan diet these days so I will soon recover." 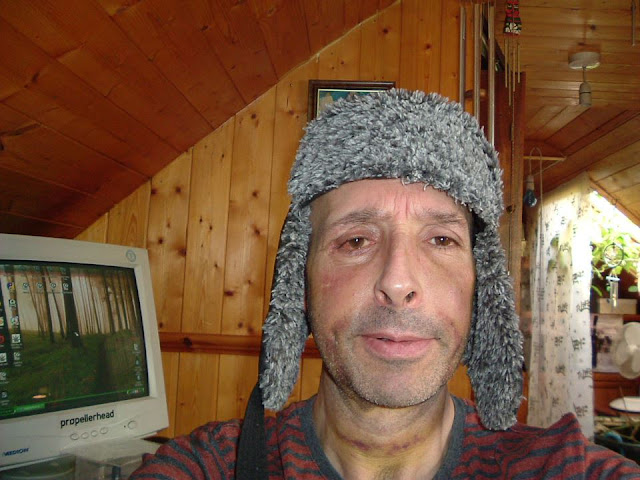 If you haven't heard on the wargaming grapevine, Kev Adams, the goblin master himself, has been badly injured during an attack in his own home. The gaming world has galvanised itself in order to help him recover.

Check out this link for more information.

Thanks for caring , ive had loads of suport wich is great , i'm not on favebook and cant see poperlt so typings bad I got three masked idiots in hoods with faces covered who got in my house when i was up here and cornered me in my loft , i got a knife pressed into my face and one of them kept hitting me in face hard with knuckleduster so all my cheekbones are smashed to bits and i look like elephant man , nose is broke in three places and one teeth broken and i cant eat so am having to drink gren goblin juice LOL , they wanted weed and money and jewellery but they had got the wrong house and i wouldnt entertain them and stood up to them hence the injuries so they gave up and made off with my imac .the slags did similar to an 80 year old lady and tried to suffocate her with plastic bag . last night according to police they did two more raids and hurt people ,they are being charged with attempted murder on me because my injuries are so severe and of course aggravated burglary but they need to catch them first .i'm more annoyed at how traumatised my family are and they said they will kill me if police are called but none of them scared me as they all had faces covered up and are little cowards .if they turn up i'm ready for them and will smash them with my cricket bat because they are nothing as i was caught off guard . i didnt fight them in close confines of loft because i have a family to care for and in close quarters could have been fatally stabbed and its not worth getting killed over an imac .Ive got to dash as my partner needs me nearby but will be back working as soon as i can see again .dont worry i'm a tough old bird and wont be beaten by a bunch of mugs .you can post this on facebook if you like so everyone knows what happened .ive got to have a load of metal plates in my face so will get rid of my wrinklelsLLOL

Email ThisBlogThis!Share to TwitterShare to FacebookShare to Pinterest
Labels: Goblinaid