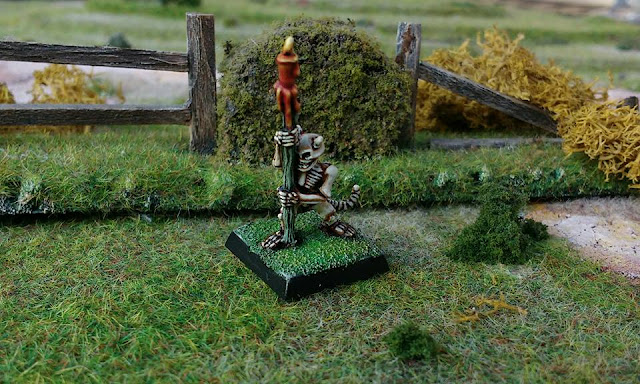 As you will know, I rather enjoyed painting the small Kev Adams goblin over the last few days. I have decided that I quite like tiny models and really enjoy working with them. Why? They are easier to handle, require no complex gluing and you are more likely to finish a figure in a single sitting. They are also more likely to be full of character.

I scratched around in my collection for something suitable this morning and my eyes fell upon a long ignored bag. It contained a collection of Famous Familiars bought from GW when they re-released them in white metal some years ago. They were probably the last thing I bought from the company if memory serves. Rooting around in my other bags (and checking the original listings) it seems that I have twenty-three out of the twenty-four original models.

Have a look at the original White Dwarf advert. 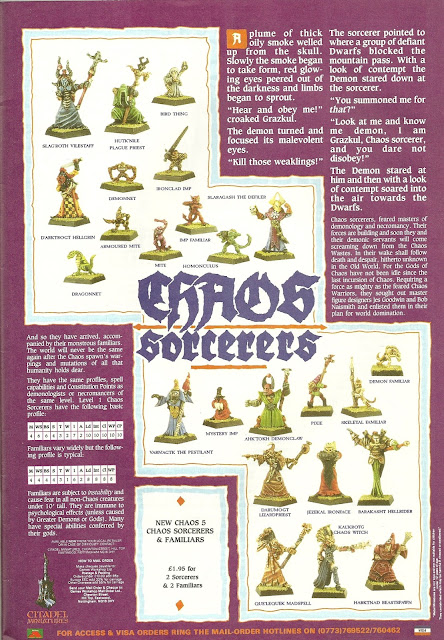 Each model is very different. Each is imaginative and well sculpted. All have plenty of character so I thought - 'I've found my project!' So I plan to paint up all the models in my possession over the next couple of weeks. As you will have seen, I started with the Skeletal Familar/Minion. From the little research I have done at present, the naming of these figures varied widely through the '80s and into the '90s. I'll be using the name I like the most when describing them. If memory serves, Jes Goodwin sculpted the bulk of these figures (and his style is obvious through many of these models) but Bob Naismith's name is also attributed to some.

Why pick the skeletal figure?

Well, I am still bringing myself up to speed with painting again and bone is something I feel very comfortable with. I used my usual method. White undercoat followed by orange, brown and black ink washes to build up depth. The bones were then highlighted with my beloved Foundry Boneyard Triad. A very easy and enjoyable task sitting in a sunny back garden - only interrupted by my wife insisting she cut my hair with the new clippers she's bought from Amazon...

I tried to link the staff in with the base. I wanted to make the wood look a tad rotten and grave like. I used a mid tone brown as a base colour. Washed over with a green ink and then highlighted with bone paint. The candle caused me some problems. Originally, I painted it as a traditional candle. But the bright, white paint just seemed to bleach out the figure. I thought a purple spot colour might help vary the colour scheme but my resulting finish looked rather washed out. So in the end, I opted for a nice red. My paint job isn't as good as the white original, but the model is finished. He was a bit tricky to photograph too, so apologies for the blur. I am sure I'll get a better oppportunity to photograph these models as the days go by and I add more figures to the project.