Oldhammer Weekend 2018: The Painting Competition and other Miniatures 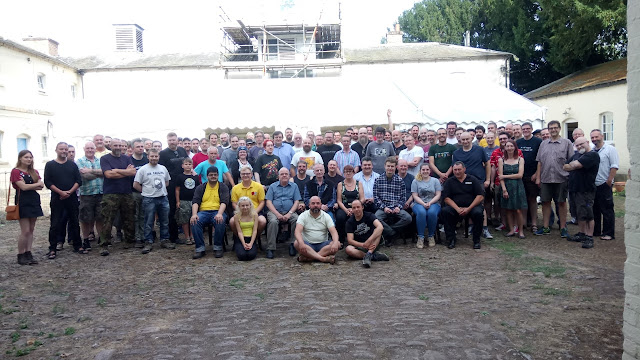 Welcome back for my final post covering this year's Oldhammer Weekend - well the Saturday part of the event at least. Starting off with the now traditional group photograph, snapped as always by Maria Ansell in front of the marquee just off from the entrance to the Foundry building. The area was originally built as the stable block of Stoke Hall and resembles Hougoumont from the famous Waterloo camapign. According to Bryan Ansell, the Duke of Wellington used to be a visitor to Stoke Hall and used to stable his horses here, so the area has a sound military pedigree.

If you have never visited the venue and are curious, have a quick look at Phil Scott's video below. His original intention was to film a little more than this (and the excitable Curtis Fell) but was struck down with illness - still the video gives you a sense of the venue and shows a little of what was occuring on the Friday.

Right, what follows is a post concentrating on the miniatures and scenery that caught my eye during the day as well as details about the informal painting competition that used to be called the Golden Gobbos. Now it doesn't really have a name beyond 'the painting competition'. As with previous years, Wargames Foundry were pleasant enough to cough up a few prizes. So big thanks yous to them - again!! 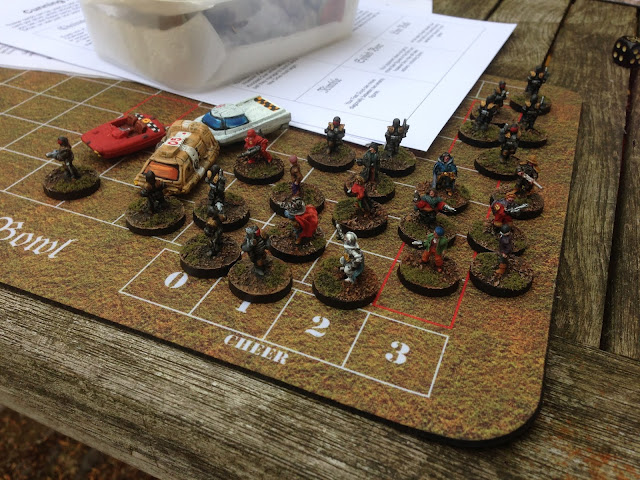 First up are these gorgeous Laserburn models. You may know about this game. It was designed by Bryan in 1980 and was originally intended to be played with 15mm scale figures and vehicles. Much of this range, with additions, are available from Alternative-Armies and it was a joy to spot these lazing around unused in the morning. Beautifully painted and based, these popped up on the Laserburn (with the plastic fish tank plants fame) table throughout the day. 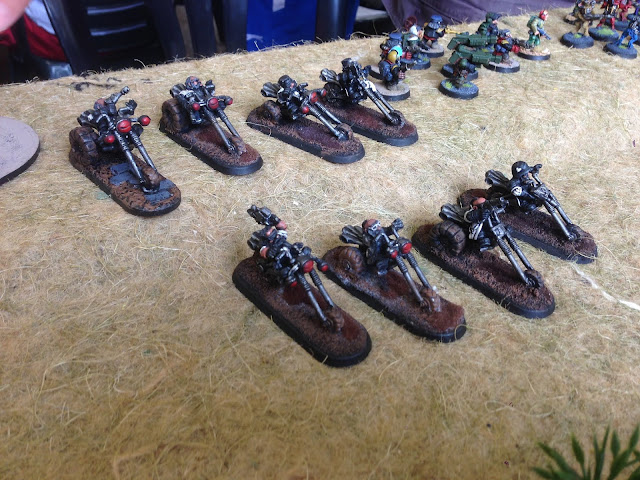 Proper old school squat bikers. I saw these last year and it was pleasing to see them again. I always enjoyed the squats and their biker background and disagree with those 'creatives' that thought they needed phasing out. That may be due to the fact that one of these petrolheads was one of my first ever models and despite never having the courage to paint it up, I still have some of the pieces lurking around in my collection somewhere. 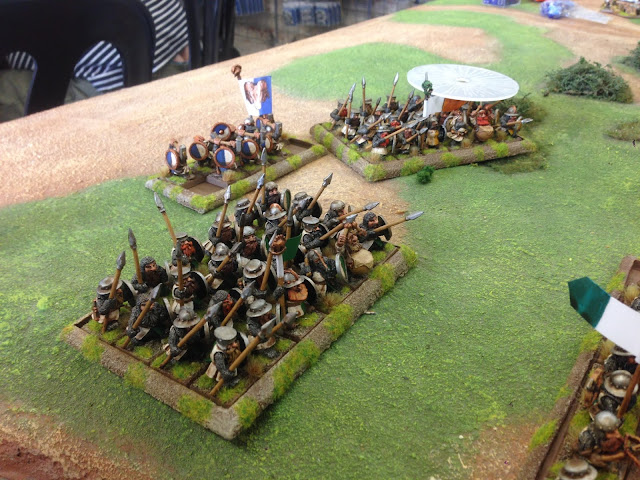 Snickit was proudly showing off his new dwarf units after recieving treatment for his skaven addiction. Don't these look lovely ranked up as they are? These are proper old school units in my opinion and look fantatsic on the table. The coherent colour scheme really helped bind them together as a regiment, with the spot colours found in beards and shields giving the unit a sense of variation despite of their uniforms. 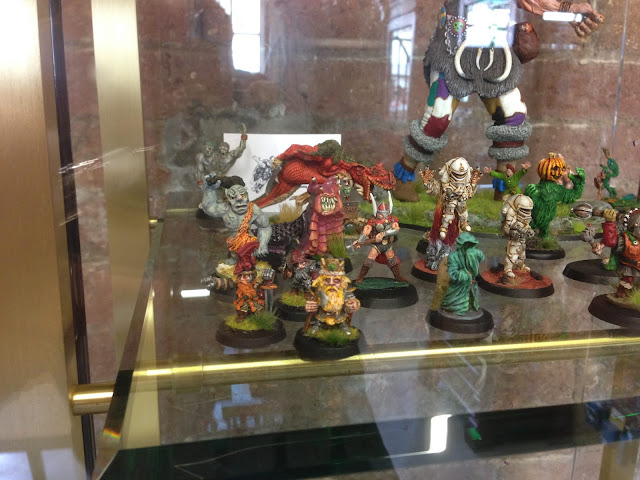 More of Mark Stevenson's Asgard project. Beautiful. Colourful. Unique. A truly insane endeavour to collect, base and paint everything that Asgard ever produced. Very worthy indeed! 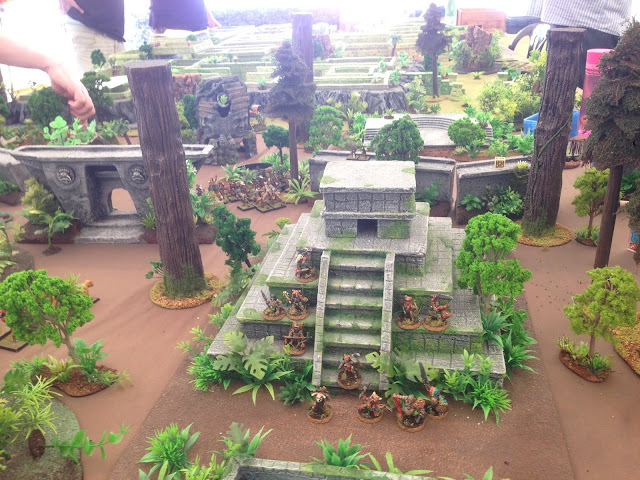 Next up we wander over to the incredibly detailed Shrine of Rigg table. Now, it would have been possible to spend the entire day just taking photographs of this game and still not cover everything on offer. I took endless snaps and these are the greatest hits out of those hurried photographs. This first one looks a little like the Ziggurat of Doom, only with a Lustrian twist. Like the Laserburn game, notice how a few tastefully placed plastic fish tank plants can bring a scenery piece or gaming table alive with living detail. 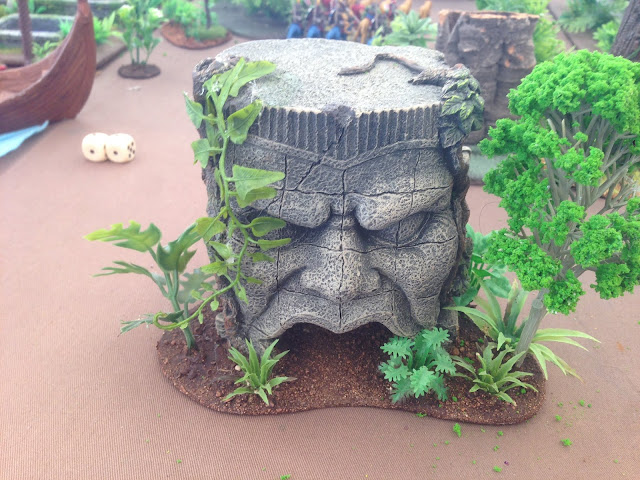 This Olmec inspired head was just one of the incredibly well made pieces on the table and just oozed jungly character. Again, the tasteful placing of those plastic plants and model railway trees brings the piece to life and proves the 'less is more' approach to detailing is a true now as it has always been. 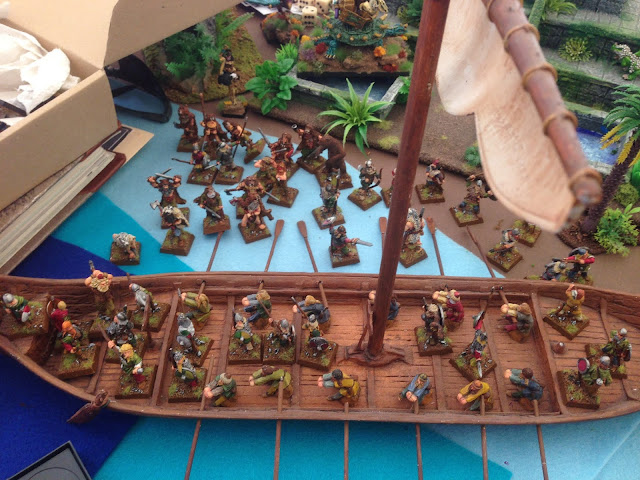 I am pretty sure this ship in the Revel viking longship that Amazon put on sale a few years back and sold loads of sets to eager Oldhammer fans. I have two - somewhere! What caught my eye were the wonderful rowing models gripping the oars and the masses of barbarian types milling around. 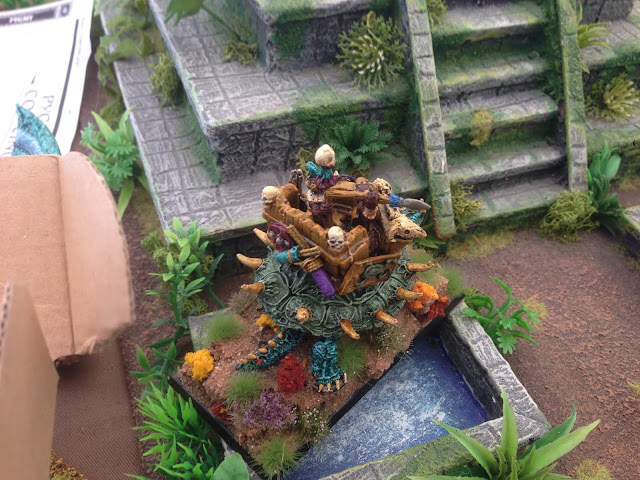 A crazy war turtle-thingy looms large out of some kind of ritual pool. I loved the detail on the base here and the way the autumnal colours contrast with the scheme of the model. 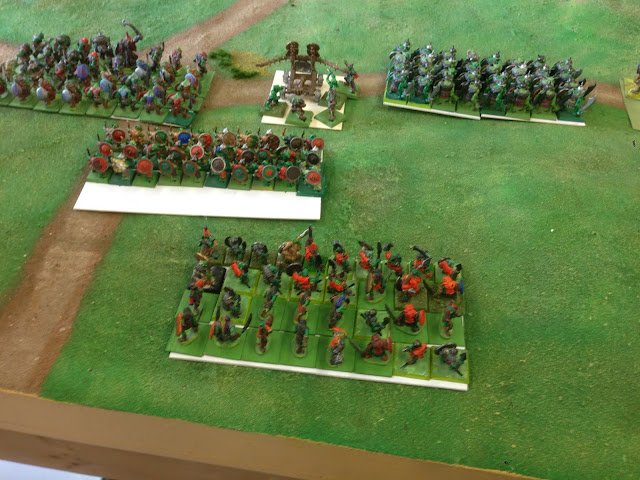 Many enthusiasts I speak to are highly concerned about their painting skills and I feel this holds many people back from engaging in wargaming. Really there is no need to worry as even models such as these, rudimentarily based and painted simply can look extremely effective on the table top. In fact, they look even more old school than the more skillfully painted stuff. The card movement trays are also a nod to the old days and the old ways so I was pleased to see these. 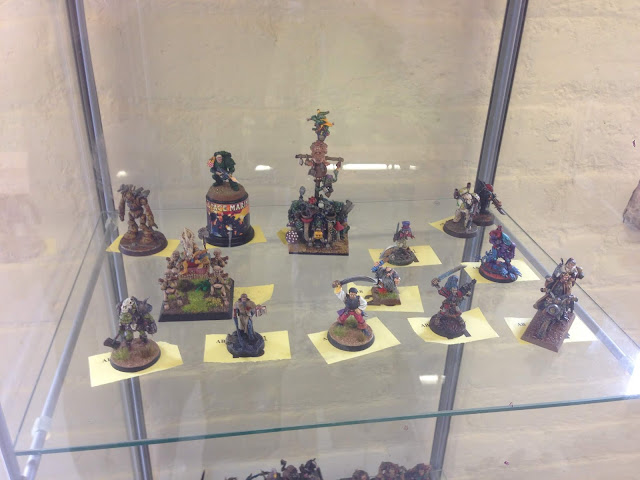 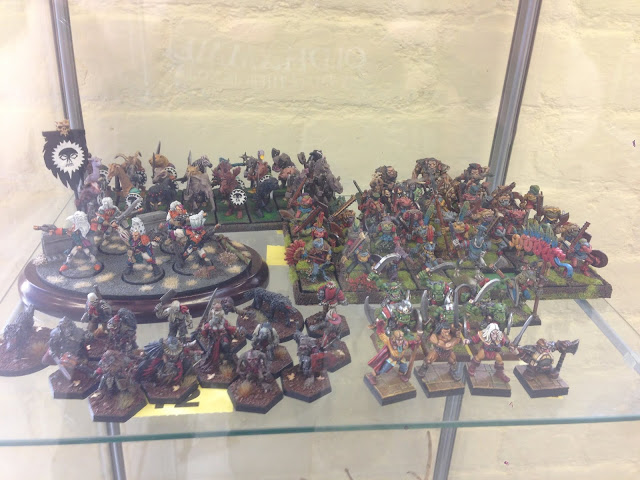 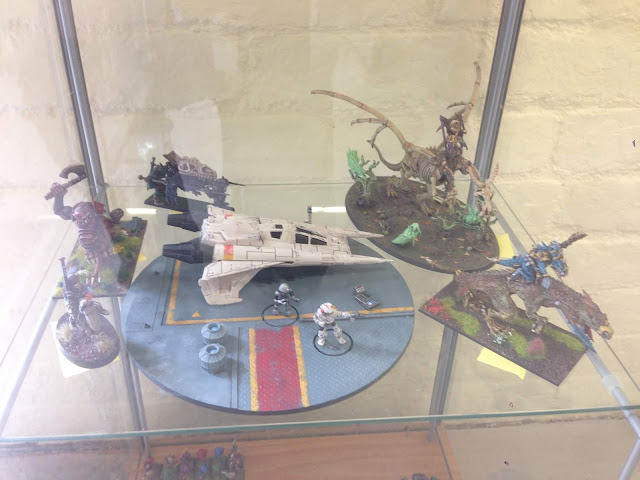 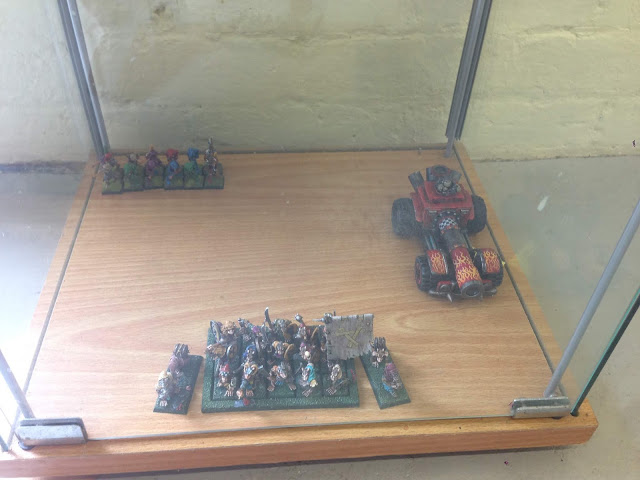 These rather ghostly looking shots represent the painting competition entries upon my arrival to judge the event alongside Garth James and Tony Yates. This year, someone had the great idea of using raffle tickets to identify each entry and this made identifying who painted what far easier than in the past. As has become tradition, the models were gathered into three fairly loose categories: Single Figure, Big Thing and Unit with each level of the cabinet being used to display each of them. There were some exciting and unique pieces to be enjoyed and I must say that there is sometimes little difference in quality of painting between the entries and the figures you see being used in games. 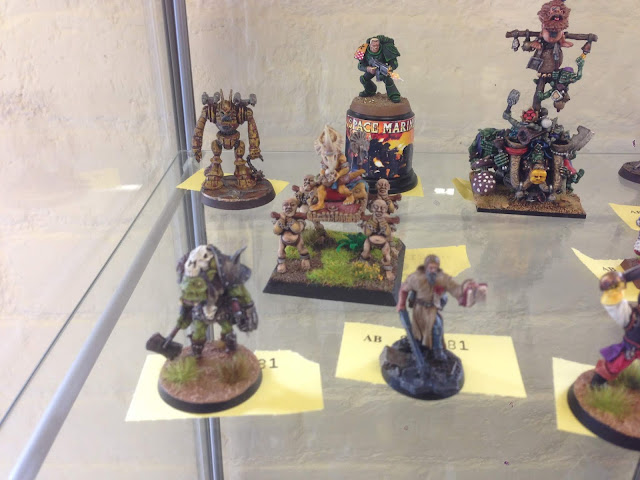 The Single Figure shelf had these entries on display. Can you spot a painted Drewbot top left? Or Steve Casey's celebration to the old Jim Burns Space Marine artwork? The slann palanquin was a lovely piece too. Sorry about the slightly blurry photograph by the way! 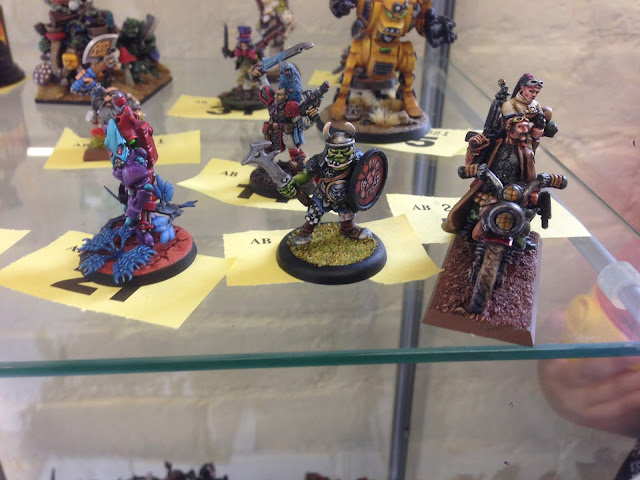 I loved the orc here. Really old school and a nod to the paint jobs of yore in 1980s White Dwarf 'Eavy Metal articles. 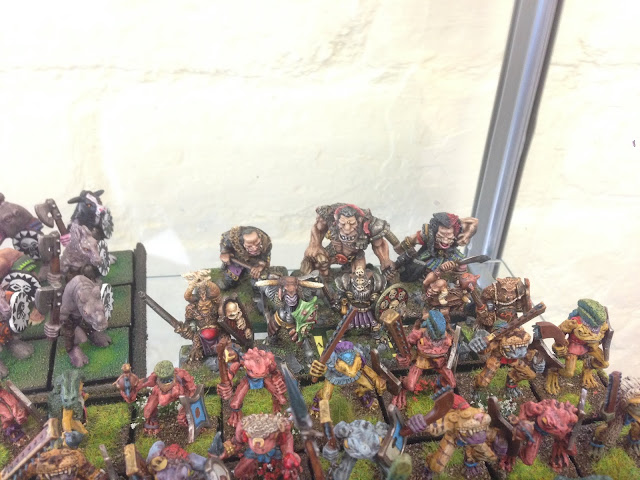 I was also deeply impressed by the Realm of Chaos beastmen you can see here. A row of five models beautifully painted and very much in keeping with the Slaves to Darkness era colour schemes, only with a modern twist. I also liked the nod to the Arcane Armorial shield designs that had been hand painted on their shields. The ogres behind were worthy contenders too.

Right, on to the winners! 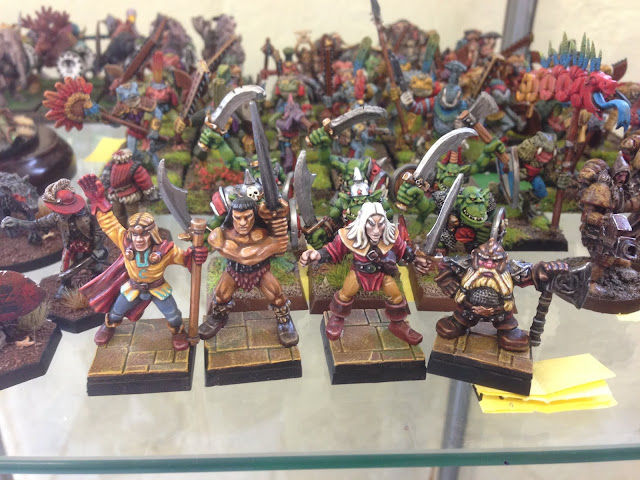 The winner of the Unit category was Mark Elsdon with these incredible Heroquest figures. What caught the judges' eye with these four figures was the distinctive painting style and choice of colour. The bases also went a long way to helping this entry pick up the prize as not only were they extremely well realised but they also fitted the theme of dungeon basing in Heroquest. 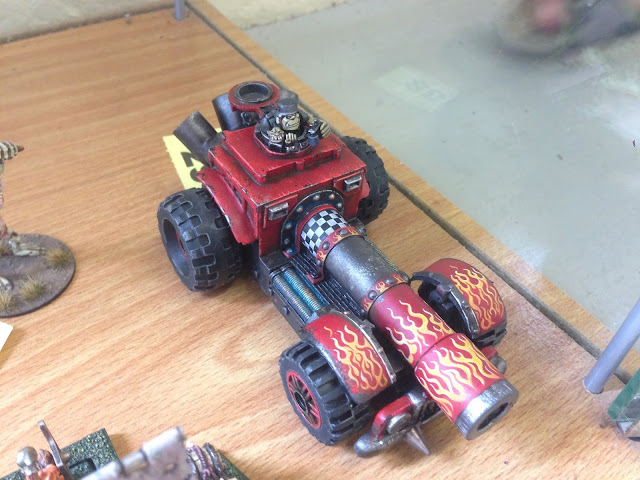 Chris Webb won the Big Thing category with this Ork Warmachine. Exquisite attention to detail and incredible freehand skills won the day for him. A gorgeously presented model painted in 'go fasta red' complete with enthusiastic driver and companion. 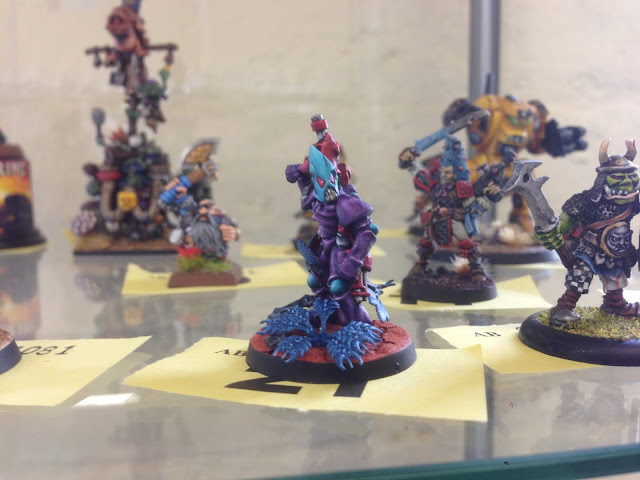 Alan Harper picked up the Single Figure with this eldar model. The judges loves the purple and blue colour scheme and alien gribbly base. This figure stood out amongst the others, so well done! 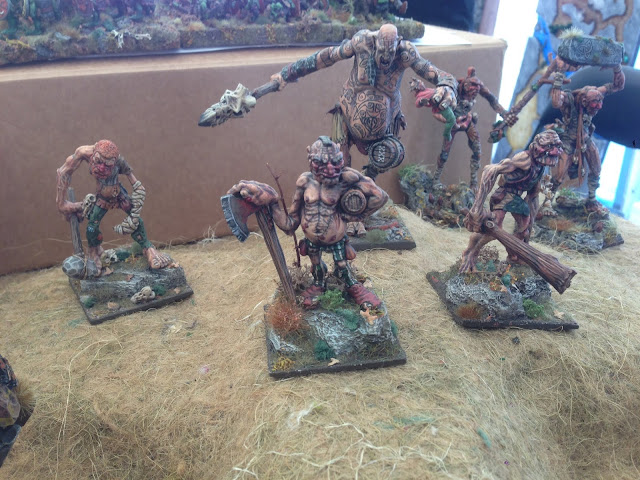 Later on, I spotted these outsatnding giants (just forget that you've seen that godawful plastic rubbish one) just lying around. These were part of a larger collection of orcs and goblins and were some of the nicest painted models I saw during the whole event, with the three 1980s C series giants out front being particular highlights. I just love these models. 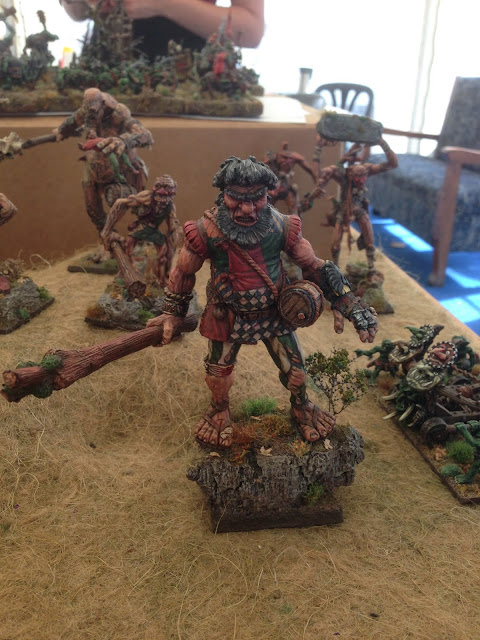 The Marauder Giant was also part of this collection. As with the other models he was very well finished and looked very impressive alongside his gigantic kin. A fantastic army indeed. 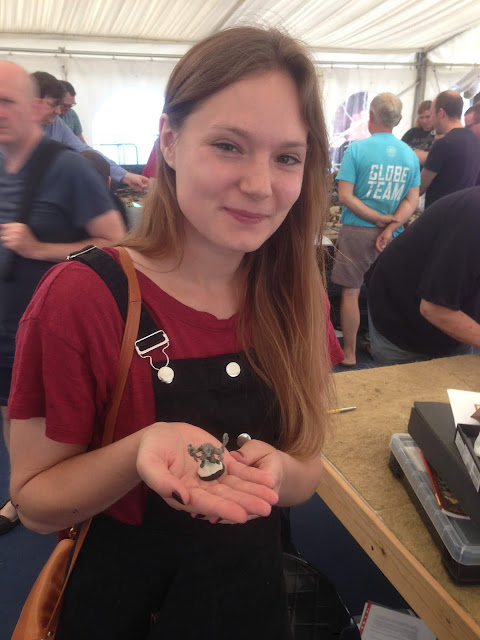 Whilst exploring the giants I met Jemma with a J who turned out to be an aspiring sculptor. Managing to persuade her to fetch her work from the boot of the car I was amazed at what I saw, especially after Jemma confessed to only having been sculpting for three weeks. Despite her lack of experience she clearly knew far more than I ever would about the subject and reeled off a range of different putties and armature contortions.

She emerged from the carpark with a little black box with old school style toilet roll covered models and impressed us all with her embryonic work. 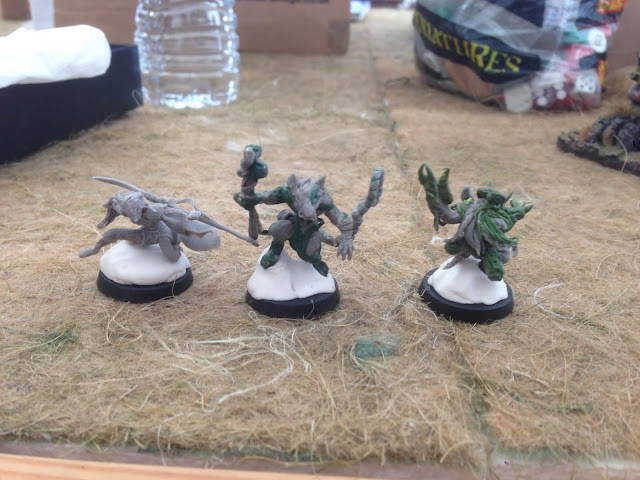 I took this snap of her stuff and thought to myself - we have some geniune raw talent here. Her skaven model was better than some of the stuff I have seen on sculpting forums and she had really captured the rat like face of the breed well. Her models are fairly brittle and need further work to ensure they would survive the casting process but were inspiring to see. 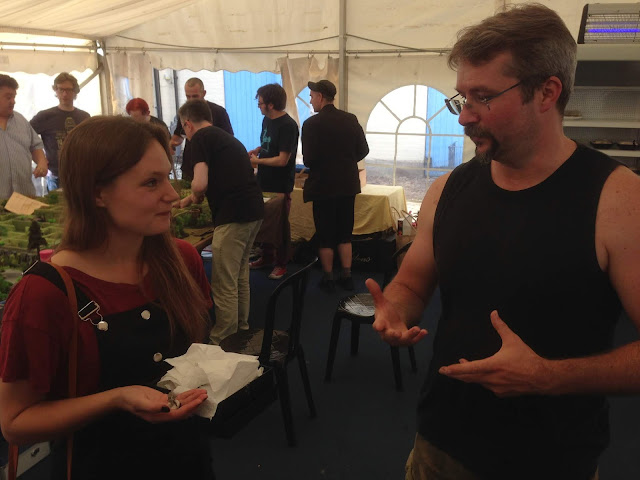 Introducing her to the ever vested Tim Prow, he gave her some expert advice about how to improve her sculpting skills and I left them to it. This was my stand-out Oldhammer moment this year as the friendly, open nature of the event allows things like this to happen. Everyone is equal at BOYL - varied individuals brought together by their love of old school models and the vibe that went along with them. 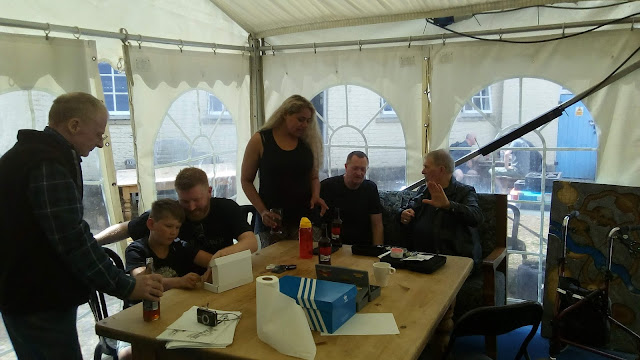 Right, time to wrap up for another year. And I will end with a photograph taken by Matt Adlard that I shamelessly stole from his Google+ account. Oldhammer has certainly been a long and pleasant journey for me and we have come so far from the days when we were but a handful of disperate bloggers clinging to a time long past. When I first set out writing Realm of Chaos 80s I would never have expected to comment on a photograph such as this, where I can be seen talking to my son about Citadel miniatures alongside Bryan Ansell and John Blanche.  Not to mention great guys like Drew Day Williams.

With the near endless debate of 'is this Oldhammer?' still ongoing, boys and girls here is your answer!