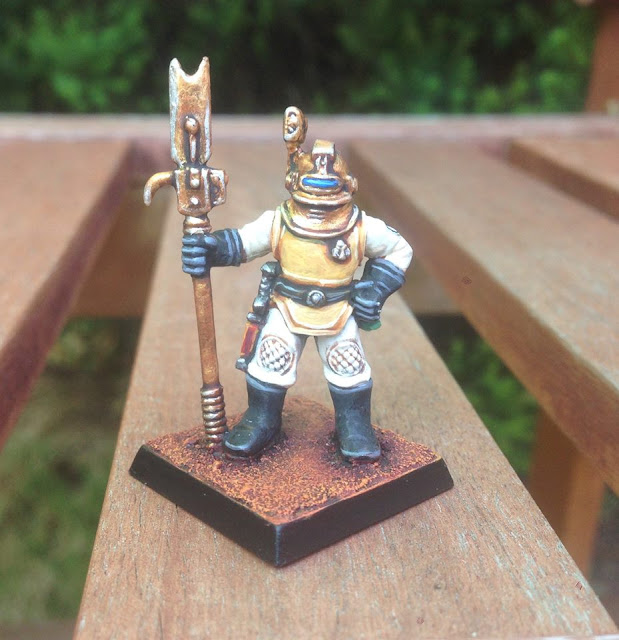 What is it with event miniatures? If you actually attend, chances are you're too busy to remember to pick one up and if you don't make it to the event you're forever desparate to acquire one! Having been away from Oldhammer for quite a while I was really quite thrilled to see this little chap waiting for me upon my arrival. Named the Null Steersman he is, of course, a pastiche of two pieces of popular Oldhamer legend and was sculpted (like last year's model) by John Pickford.

Having not picked up a painted brush since April and with the heady fumes of the Oldhammer Weekend still in my nostrils, I decided to paint him up immediately - to help get the old eye back in! I had a little trouble getting a decent photograph of him this morning - the sunlight was just too strong and bleached much of the detail out of the image, so this darker shot will just have to do for now.

But if the pedigree of this particular figure is not obvious to you let me explain a little further. The Null Steersman is a play on now infamous Nuln Spearsman, a figure so rare not even Bryan Ansell seems to own one, and recently sold for a very large amount of money on eBay. Of course, this being Realm of Chaos 80s, I was able to track down the buyer and bring to you the PAINTED version of the model thanks to Javi Torrijo. 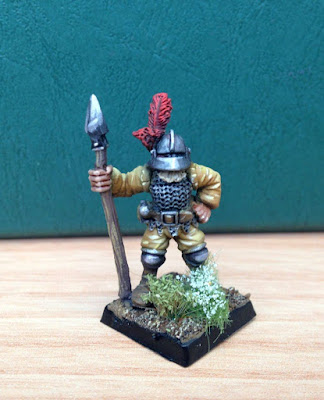 The two models are posed identically but where the chappy from Nuln sits very comfortably in a fantasy bracket, the event miniature is obviously from a sci-fi slant. If you are au fait with the SpaceFleet project (the original space combat game developed during the Ansell years) you may well recognise the equipment as coming from Jes Goodwin's Imperial Crew sketches. Take a look... 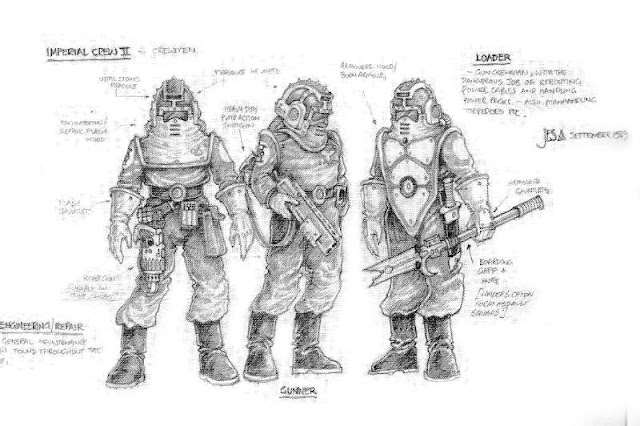 The event figure is a hodgepodge of ideas taken from this image with the bulk of the inspiration coming from the Engineer and the Loader. Just comparing the sketch above with an unpainted casting below allows you to play a little spot the difference game with yourself - if you are so inclined. 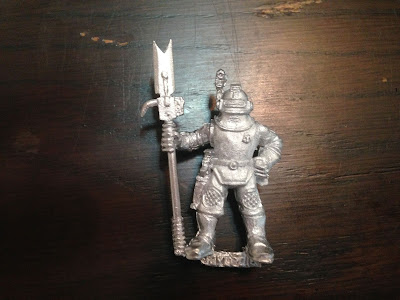 The castings that I saw were all excellent with no sign of any real flash or any nasty splodges. They were available at the sales desk all day I was there, though it seemed that there weren't that many guests who noticed them! If you are visiting a BOYL event ALWAYS check to see if there is an event miniature!! 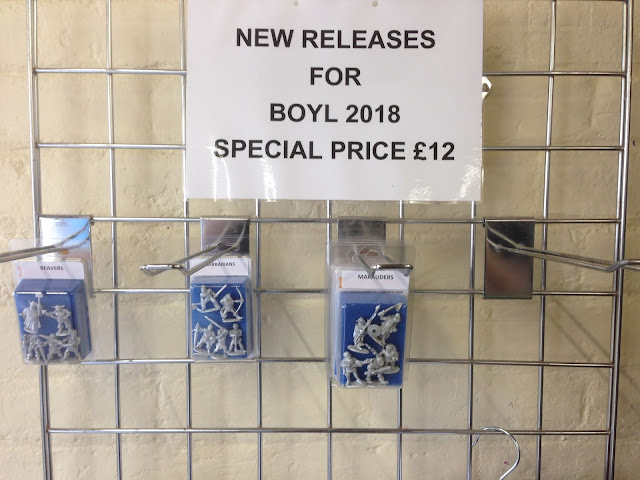 Of course, the Null Steersman wasn't the only special model on offer during this year's event. Foundry, who like to surprise us with special releases, put out four new blisters of old school Citadel models especially for us. If these figures follow in the footsteps of everything else they have produced for Oldhammer, they will remain in sale as part of their ex-Citadel range. If you are after these figures RIGHT NOW and simply cannot wait I would advise just ringing the Foundry shop up and speak to them directly. They may still have some left!

There are four packs - Reavers, Barbarians, Marauders and Outlaws and are sold in sets of five at the moment. 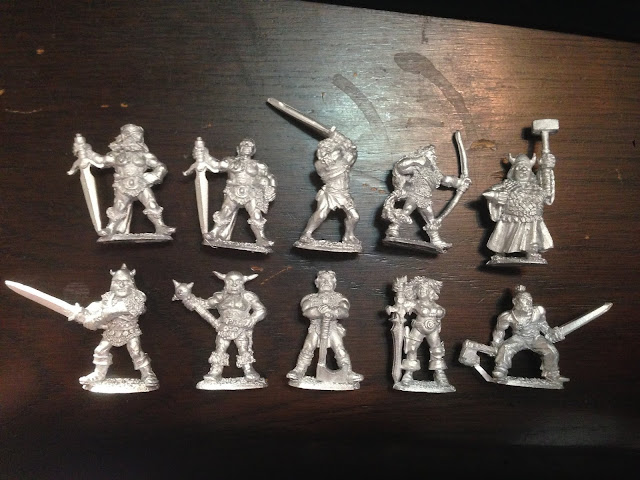 The Reavers and Barbarians are a variety of castings (as far as I can tell) from the Old F3 barbarian releases sculpted by Bob Niasmith and the Perrys. See how many of the models in the advert below appear in my 21st century image! These models are very similar to the other barbarian models put out at the first Oldhammer Weekend though several figures here are of note. The first two models (top left) are two of the three 'barbarian chief' style figures from the range - and luckily I have the third figure fully painted in my collection. Two of the figures here are female and have been known to fetch a bit online so having them available at retail is fantastic news to those of you who just hate to pay over the odds. 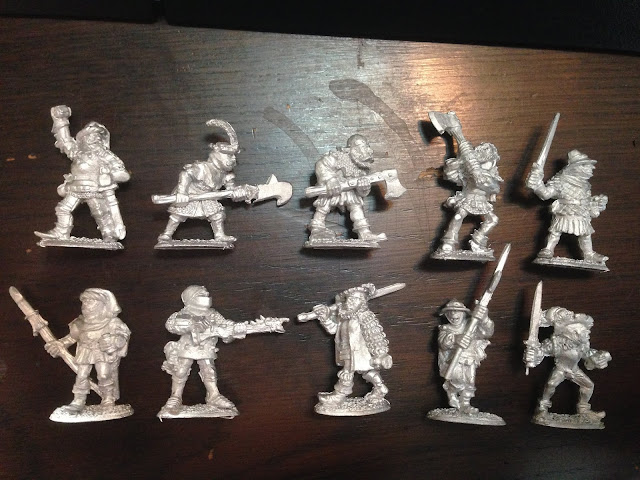 The Marauders and Outlaws packs are of more interest in my opinion. Not only is the sculpting better on these figures many of them have been highly collectable in the past and have sold around the £10-15 range individually. These come from the F2 Fighters range and can be observed below in an ancient and washed out advertisment from White Dwarf. 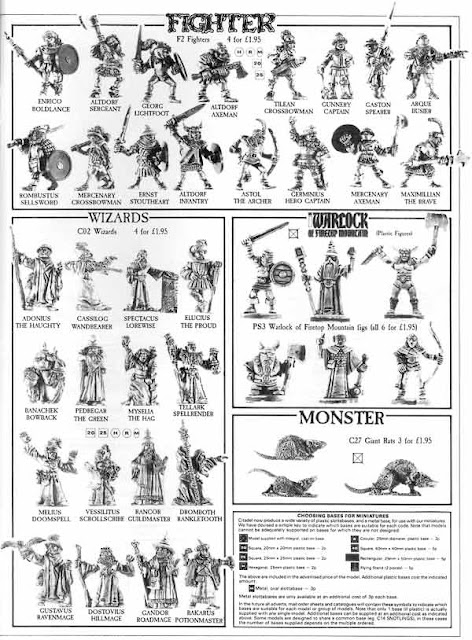 Right, I am off to paint up some of these rare beauties. Only big thanks to the Wargames Foundry remains. It is great to see popular and iconic models such as these out of the hands of eBay 'salesmen' and back in the hands of real enthusiasts. What are you waiting for?